Zelfira Tregulova: “Moving art-works during this pandemic turned out to be easier than moving people”

In an interview by art patron and collector Victoria Yanakova arranged exclusively for The Russian Week in London – Festival Maslenitsa 2021 organised by Ensemble Productions, Zelfira Tregulova, Director of the Tretyakov Gallery spoke about the importance of the museum’s international exhibition program, how the situation in the world has affected it, and the importance of cultural cooperation with the UK. The Tretyakov Gallery has been working a lot with the UK and London, in particular, over the last 5 years. In collaboration with British colleagues, the Tretyakov Gallery prepared a wonderful exhibition of Russian portraits at the National Portrait Gallery, and then brought an exhibition of their masterpieces to Moscow. “During the year of the 400th anniversary of Shakespeare, the only portrait of Shakespeare made during his lifetime was exhibited at the Tretyakov Gallery,” said Ms. Tregulova.

Zelfira Tregulova recalled three wonderful joint projects with the Tate Gallery that we all remember: an exhibition of Malevich in 2015, a brilliant project dedicated to the work of Ilya and Emilia Kabakov in 2017, an incredible exhibition of Natalia Goncharova, as well as an exhibition dedicated to the 100th anniversary of the Revolution which opened at the Royal Academy of Arts in London in February 2017. “It was a very important project for all of us, which lasted only for 2 months and during this time it was seen by 200,000 people, which became an absolute record for Russian and Soviet art of the avant-garde era. Even Malevich was attended by 150 thousand people,” said the director of the Tretyakov Gallery.

Speaking about the upcoming cooperation with the UK, Zelfira Tregulova said that the museum is preparing a large serious project “Russian Thread – Art and Fashion”, dedicated to the influence of the Russian culture on fashion and style of the 20th century. According to her, this project was conceived together with the Victoria and Albert Museum in London. After Martin Roth left his post, the Tretyakov Gallery continued the work on the project in close cooperation with the wonderful Jeoffrey Marsh, the museum curator, who worked on such famous exhibitions as “David Bowie” and “The Revolution”. 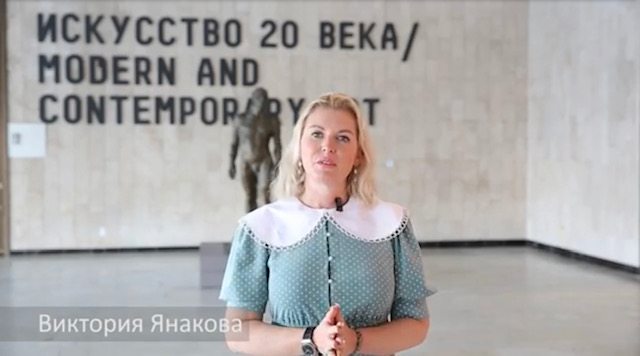 In the current situation, when borders are closed, and people cannot move freely, go to museums and theatres, art has become such a unifying force that is defying borders. Ms Yanakova asked Ms Tregulova how the pandemic affected their relations with museums in other countries.

According to Mrs Tregulova, the cooperation only flourished. All museums are trying to find new formats for the usual logistics of sending works abroad, transferring them to material-responsible storage. Reconciliation of the safety and transfer of works online is very actively implemented, which does not require the presence of a courier next to the art-work. Special sensors are built into the objects of art, that give information about where the storage-van with the given exhibit is, what the temperature inside the storage-van and inside the box with the artwork is.

Ms. Tregulova noted that “Moving art-works during this pandemic turned out to be easier than moving people, which is odd enough. The international museum community is trying to uphold the agreements reached earlier, and we all want to launch our large international exhibition projects,” she said. Therefore, even in spite of the situation that developed in Europe, the Tretyakov Gallery participated in the autumn in the Chagall exhibition in Italy and in the Russian Impressionism exhibition at the Barberini Museum in Potsdam, which unfortunately was closed immediately after the opening. The exhibition has now been moved to Baden-Baden and will open there at the end of March, and then return to Potsdam again in the fall. Twice the museum moved the exhibition “Dreams of Freedom” about Russian and German romanticism, which is the most important for the Tretyakov Gallery. The exhibition is due to open on 22 April 2021 and everything is ready for packing and transporting the exhibits. According to Ms Tregulova, this will be a unique project, for the first time showcasing the art of romanticism of the two countries – Russia and Germany.

Zelfira also expressed hope that an exhibition of the Morozov collection will open in Paris in May, in which the Pushkin Museum, the State Hermitage and the Tretyakov Gallery are participating together. Additionally, a special retrospective of Ilya Repin will be shown this year at the Atheneum Museum in Helsinki, which will then move to Petit Palais in Paris.

Additionaly, The Tretyakov Gallery is planning a large project dedicated to the Russian nesting doll- matryoshka in Italy, with its concept rooted not in its populist image, but in philosophy. According to the director of the Tretyakov Gallery, this year has been declared the year of museum exchange between Russia and Italy, and she believes that with the relaxation of restrictions, many museums will try to take advantage of this.