On 26 May 1896 (14 May according to Julian calendar) began the troublesome reign of Nicholas II, the last Emperor of Russia. Nicholas II remained on the throne for 21 years, until in March 1917 the growing political and social unrest forced him to abdicate. Back in May 1896 Nicholas, happily married to Alexandra Feodorovna (at birth Princess Alix of Hesse and by Rhine), granddaughter of Queen Victoria, could not envisage the tragic end of his dynasty. On the contrary, his faith in the House of Romanov and his own mission as the anointed Christian ruler allowed him to fantasise about Russia as a pre-Petrian country at heart – a country of boyars (medieval Russian aristocracy) attending to the ‘dear Father Tsar’.

A visual example of this dream is a range of publications that accompanied the lavish coronation of Nicholas II and Alexandra Feodorovna. While the coronation album (Koronatsionny sbornik), an imposing two-volume, richly illustrated book, published in St Petersburg in 1899, continued the line of coronation albums established in Russia by Anna Ioannovna, the coronation menu, designed by Viktor Mikhailovich Vasnetsov (1848-1926), exceeded earlier coronation menus in its artistry and in the potency of its symbols.

The coronation itself took place in Dormition Cathedral in the Moscow Kremlin, and the celebrations lasted for several days, in a scale never seen before. Vasnetsov’s menu, however, was presented to the guests of the main banquet, on the coronation day itself: it was rolled and placed by the precious cutlery set on impressively large tables. Almost a meter in length, lavishly printed on thick paper, with numerous colours and gold highlights, this impressive menu is a beautiful witness of the Russian Revival style.

By then Vasnetsov, a painter and architectural designer, had gained wide fame for his works inspired by the Russian folklore and Russian medieval history. Some of his paintings became national symbols in Russia, such as Bogatyrs (Slavic Warriors), A Knight at the Crossroads, and Saviour. Vasnetsov was a leading artist in the Russian Revival style, drawing on historical events and traditional designs pre-dating the Europeanization of Russia in the 18th century. His attention to historical detail and the physical beauty of his characters allow art historians to draw parallels between his art and the British Pre-Raphaelites.

Vasnetsov designed the coronation menu as a medieval tsar’s charter, masterfully using vyaz’, or Cyrillic calligraphy, as the main font. This ornate lettering originated in the 11th-c. Byzantium and flourished in Russia in the 16th century. The title of the menu, done in vyaz’ letters, reads: Священное венчание на царство государя императора Николая Александровича и государыни императрицы Александры Феодоровны [Holy Coronation of His Majesty the Emperor Nikolai Aleksandrovich and Her Majesty the Empress Aleksandra Feodorovna].

Under the monograms of the new reigning couple, Nicholas II and Alexandra Feodorovna, old Russian motifs frame another coronation scene, that of the very first Tsar of the Romanov dynasty, Mikhail Feodorovich, in 1613, giving a clear ideological message of tradition, heritage, stability. 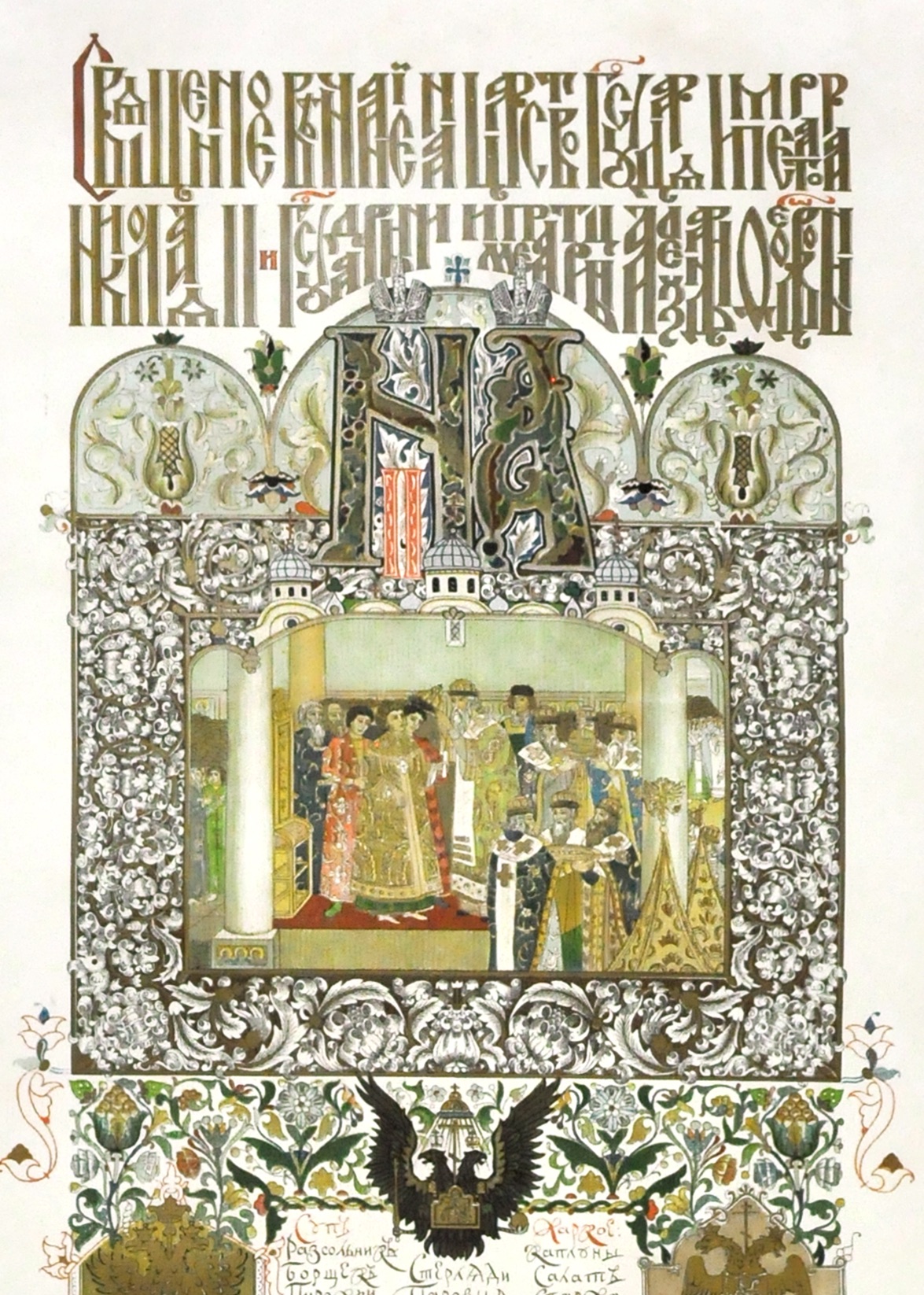 Vasnetsov drew this miniature from the original painting preserved in the Armoury Chamber in the Moscow Kremlin; cupolas of Dormition Cathedral form a symbolic background for the coronation scene. In the same historical spirit, Vasnetsov placed, above the relatively small menu itself, three different heraldic double-headed eagles taken from different periods of the Russian history.

Very much like the design of this artistic work, the menu itself was also traditional. It contained, for the soup, rassol’nik (a traditional soup made with pickled cucumbers), borschok (the famous borsh, a beetroot soup), pirozhki (pies); steamed sturgeons (sterliad’), lamb, galantine of pheasants; for the roast, capons; salad; asparagus; for dessert, fruit in wine, ice cream. 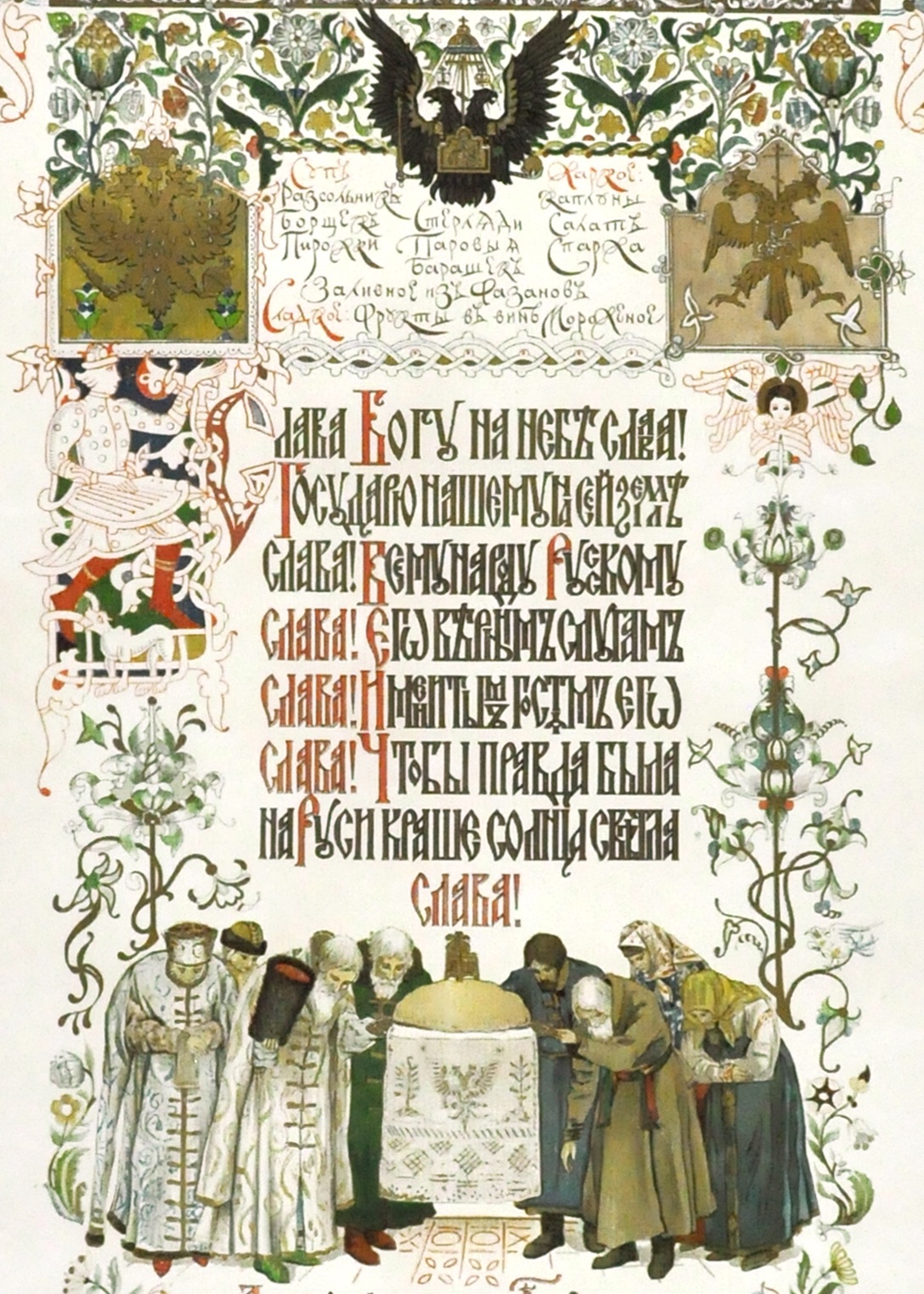 The Coronation Menu. Fragment featuring the Glory and ‘bread and salt’ ceremony

Under the menu, in much larger and bolder font, Vasnetsov placed a praise to the new Tsar – written in vyaz’, with capital letters printed in kinovar’ (cinnabar), the red-orange pigment traditionally used in icon painting. This Glory reads as follows:

The text of the Glory rests on the second scene of the scroll: a very old Russian custom of the boyars and people greeting the Tsar with bread and salt. Bread and salt rest on a platter, covered with a towel featuring the state coat-of-arms. As if commenting on the scene, Vasnetsov extended the Glory below the miniature: 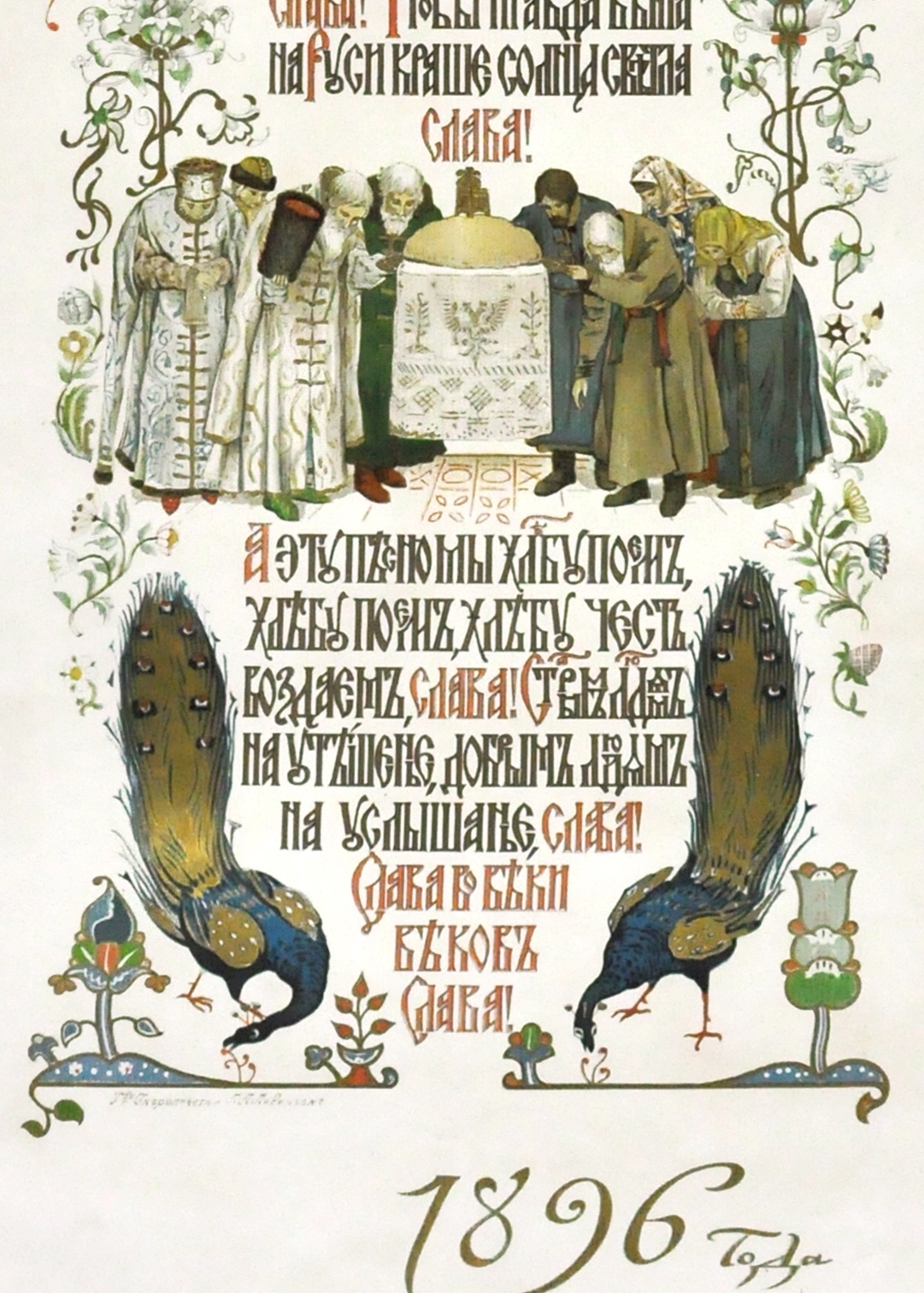 Vasnetsov’s menu was the first in a row of tributes paid by the last Romanovs to the seemingly idyllic pre-Petrian Russia. In 1900 Nicholas and Alexandra visited Moscow for Easter celebrations. They attended the Easter Mass in the Verkhospassky Cathedral in the Kremlin; Alexandra Feodorovna was wearing a traditional white Russian dress embroidered with gold, and a traditional headdress (kokoshnik) decorated with pearls. In 1903 they returned to Moscow again for the Easter period, following which Nicholas proclaimed in his public rescript: “Protected by the Holy Mother Church, within the walls of the ancient Kremlin, among the great Moscow relics and glorious monuments of the native history, I draw renewed strength – the strength to serve the beloved Fatherland – from the old Russian past and signs of the people’s sentiment” (16 April 1903).

Earlier that year, to celebrate 290 years of the Romanovs, Nicholas and Alexandra took part in the famous Ball à la russe in St Petersburg, for which all the participants were dressed in bejewelled 17th-century style costumes. 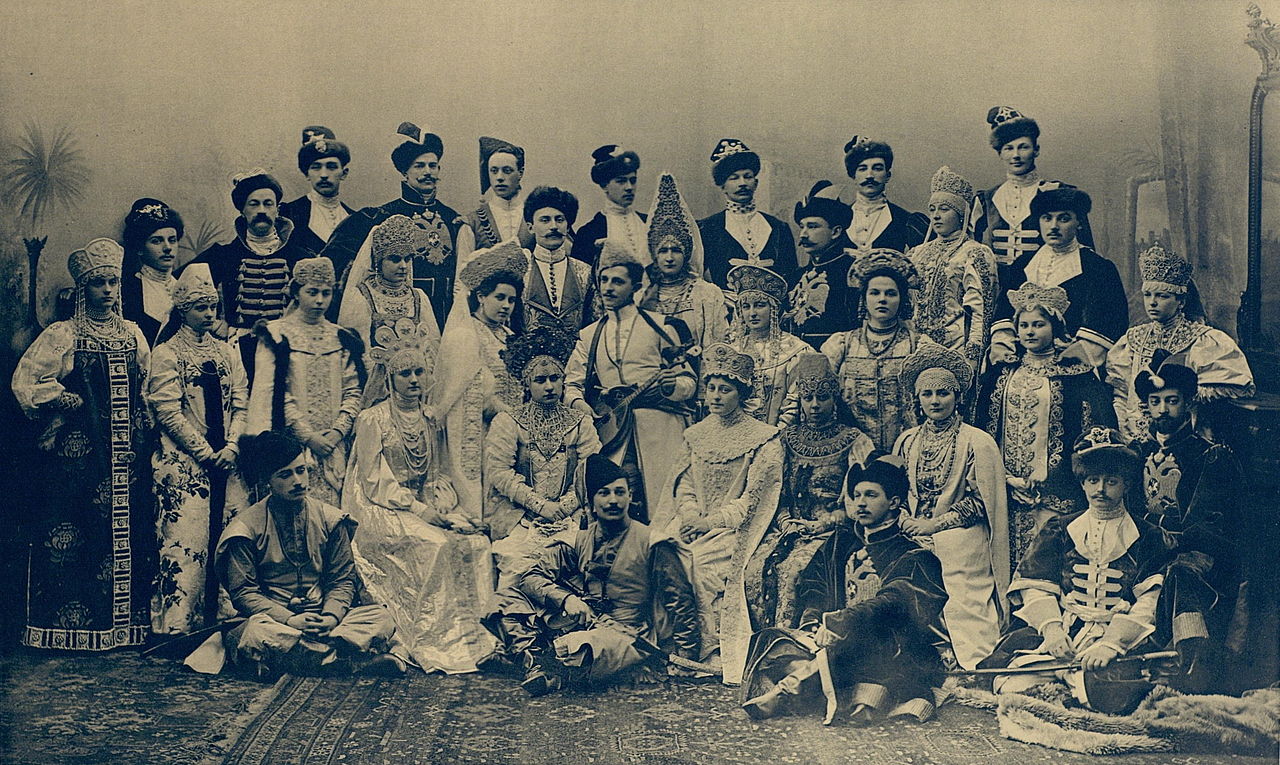 Nicholas was dressed as Tsar Alexey Mikhailovich (the son of Mikhail Feodorovich, depicted on the coronation menu); Alexandra was dressed, poignantly, as Alexey’s first wife, Tsarina Maria Ilyinichna Miloslavskaya (rather than his second wife, mother of Peter I). 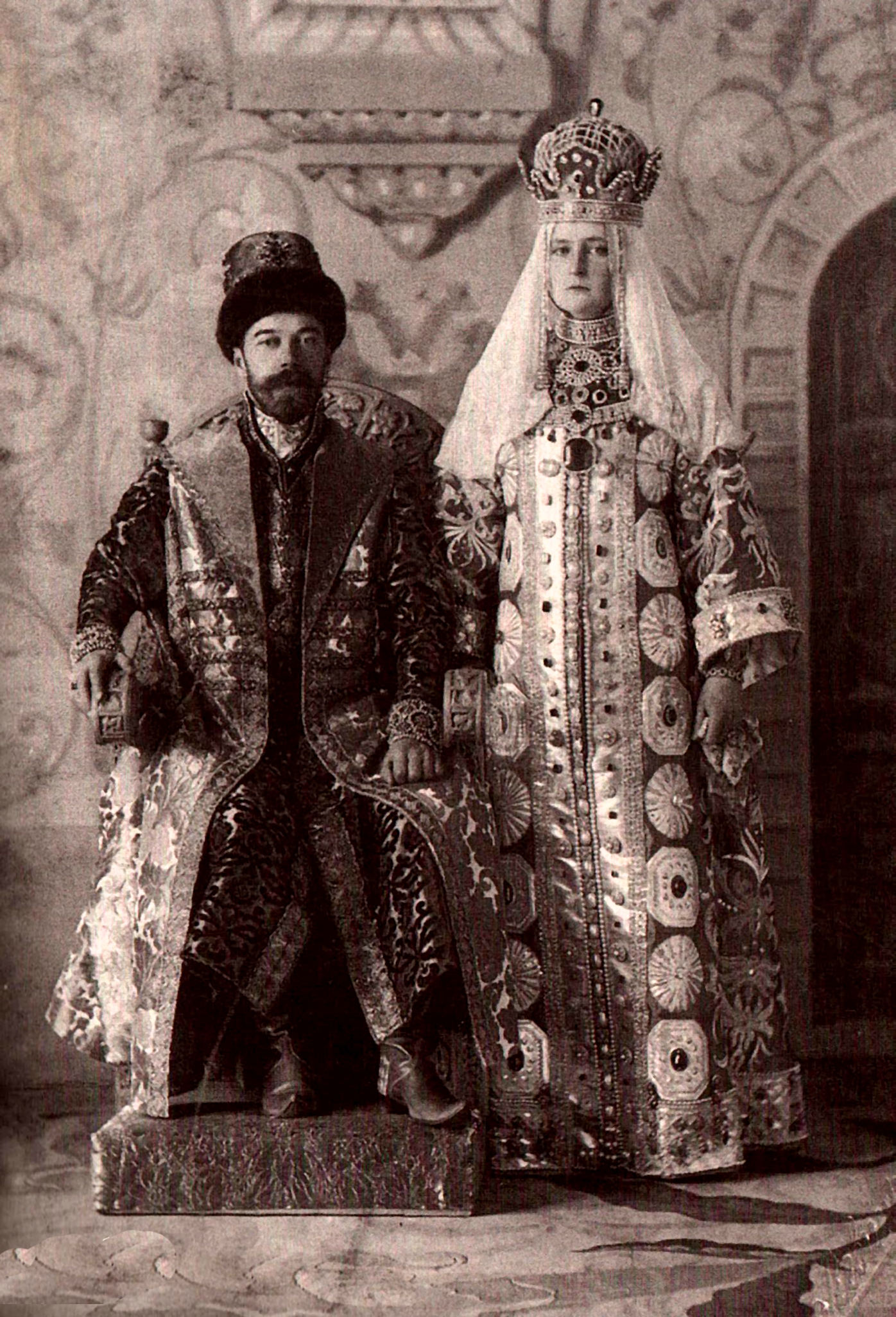 Nicholas II and Alexandra Feodorovna at the 1903 Russian Ball

As part of his costume, Nicholas wore the jewels belonging to the Rurik dynasty, including pearl wristbands of Feodor Ioannovich (son of Ivan the Terrible).

What seemed to be an aesthetic choice in the coronation menu, by 1903 had become a rigid political course. If only the Russian monarch could have obtained an enchanted, incandescent firebird.

An original Coronation Menu of Nicholas II, printed by Levenson in Moscow in 1896, was kindly provided by PY Rare Books.

Other Articles By Darya Protopopova

“Beauty is whatever you love”: An Interview with Elizaveta Benk 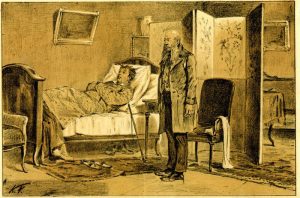