This autumn Bonhams are delighted to offer a sketch of a banner with the face of the Saviour is an important preparatory work for the painting “The Conquest of Siberia by Yermak” at their Russian Sale on 25 November. 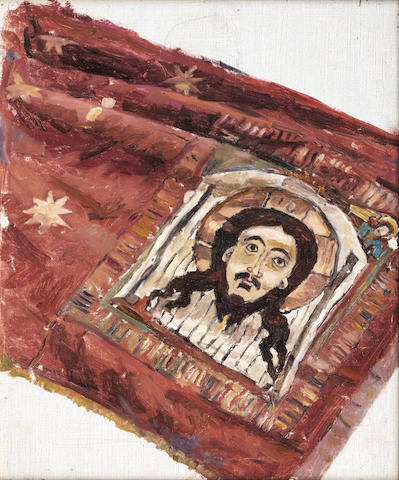 In the history of Russian art, Vasily Ivanovich Surikov (1848 – 1916) could be considered the ‘bard’ of monumental historical paintings. His oeuvre depicts many of the important historical events that have shaped Russia: “The Morning of the Streltsy Execution”, “Boyarynya Morozova”, “The March of Suvorov across the Alps” and others. Surikov’s historical paintings are invariably inspired by the conflict of cultures, eras and people.

Surikov’s technique and approach was remarkably thorough; he prepared for every painting with detailed research which included complete immersion in the historical environment of his subject. Each composition was accompanied by many sketches detailing the artist’s process and this is notably the case for the famous painting “The Conquest of Siberia by Yermak” which was first shown at the 23rd exhibition of the Association of the Itinerants, and then acquired by Emperor Nicholas II and in 1897 transferred to the Russian Museum where it is currently on display. This painting is remarkably epic, instilled with extraordinary beauty and power. It transcends the never-fading wisdom of fables, and the charm of old cossack songs and tales.

Surikov first conceived of the painting in 1889, but the first known sketch for the composition is dated to 1891. The artist did a lot of preparatory work, studying sources and travelling across Siberia as part of his research. His original conceptions of the colour and composition for the painting were altered many times and the painting was only completed in 1895. Maximilian Voloshin believed that the choice of subject was not accidental: “Those deeper and more acute elements of historical life which he did not manage to capture as a contemporary eyewitness, he brought in his blood, in his ancestral instinct, because the intoxicating and violent blood of the old Cossacks who came from the Don with Yermak to conquer Siberia flowed in him.” (Maximilian Voloshin, Surikov, Leningrad, Artist of the RSFSR, 1985, p. 24).

“The Conquest of Siberia by Yermak” depicts an important historical event. The subject of the picture is the decisive battle between Yermak’s Cossack detachment and the forces of the Siberian Khan Kuchum in 1582. In Surikov’s composition, the battle takes place in the waters of the Irtysh river, although some historical documents claim that it took place on the banks of the river. The painting constitutes an interesting and informative source about the past and was also hailed for the originality of its concept, as well as its aesthetic. Vsevolod Petrov believed that: “Surikov was able to combine in a single picture vast factual knowledge about the past of Siberia, having consolidated this knowledge with a deep poetic idea. It is typical that the banner of the Saviour, under which Yermak stands, has a glorious and centuries-old history: Surikov had seen it in the Armory. It was suggested that this banner stood on the Kulikovo field above the regiments of Dmitry Donskoy, and in 1552 it fluttered over the troops of Ivan the Terrible at the walls of Kazan.” (G.S. Gor, V.N. Petrov, Surikov, Moscow, Young Guard, 1955).

The offered lot, a sketch of a banner with the face of the Saviour is an important preparatory work for the painting “The Conquest of Siberia by Yermak”. In spite of the fact that the artist altered the colour scheme of the sketch in the final picture, the work is an excellent example of the development of Surikov’s creative thought and his artistic quest.