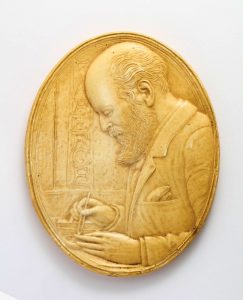 The festive season — a time of family celebrations and exchanging of gifts — is upon us. In this manner, nothing seems more appropriate than perusing through the The Royal Fabergé  exhibition catalogue in search of some inspirations. Luckily, the exhibition running now at the Sainsbury Centre for Visual Arts in Norwich, UK, provides us with more than sufficient examples of good taste and artistic approach to gift-giving.

The exhibition makes us revisit the early 20th century –  the time when the exquisite gifts made by the legendary master-jeweller Peter Carl Fabergé were high on the lists of the British and the Russian royals. The Royal Fabergé provides a rare insight into the cultural contacts on the highest level between the Russian and British royals and aristocrats throughout the  Edwardian era and beyond.  The exhibition is accompanied by the lavishly illustrated catalogue Fabergé: From St Petersburg to Sandringham written by Ian Collins, the curator of the exhibition. It is a pleasure to hold it in hands. Besides, the photos of the Fabergé  pieces are all very high quality and provide an opportunity to see the objects in some great detail. 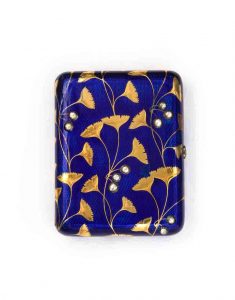 What any admirer of  Fabergé finds instantly endearing in this catalogue is also the painstaking research combined with careful and sympathetic attitude towards the master himself. Amongst the recent flood of disparaging, dismissive and, I am afraid, not particularly well-informed comments on the “bling” and “kitchy” character of Fabergé works,  Ian Collins stands tall in defending Fabergé’s sophisticated artistic genius. The exhibition catalogue is an appropriate tribute to the master’s vision and ability. The catalogue contains many valuable references and lists some rare archival unpublished documents, In his heyday, Fabergé surpassed other jewellers, such as Cartier or Bolin. In the words of  Carl Fabergé himself :  “If you compare my things with those of such firms as Tiffany, Boucheron and Cartier, of course, you will find the value of theirs greater than mine… But of course, these people are merchants and not artist-jewellers. Expensive things interest me little, if the value lies merely in the quantity of diamonds or pearls”.  Moreover, the contemporaries, such as Lalique or Fouquet, who were among the jury at the 1900’s World Fair in Paris awarded Fabergé a gold medal for what they defined as “reaching the extreme limits of perfection” and “transforming a jewel into a real objet d’art”. Luckily, in the early 20th century Britain  the royalty knew how to appreciate a genius.

It is not a coincidence that a monumental shift which occurred between the Great Britain and Russia  on 31 August 1907  — the date of signing the Anglo-Russian Convention, or entente, in St Petersburg, when former enemies turned into allies, —  must have also prompted the largest commission ever placed through Fabergé’s London branch. The same year the firm received an invitation from the British King Edward VII and his consort Queen Alexandra to model animals from  the royal couple’s beloved Sandringham estate in Norfolk. The ensuing commission resulted in the largest existing collection of Fabergé’s Russian hardstone animal sculptures, now in the Royal Collection.

In her book, Fabergé’s Animals, Caroline de Guitaut provides detailed evidence on how two Fabergé’s sculptors Frank Lutiger and Boris Frödman- Cluzel arrived from St. Petersburg to work at Sandringham and produce wax models to be later translated into hardstone carvings in St. Petersburg and then sent to the London branch. Both masters were later joined by Alfred Pocock, an English sculptor and gem-cutter, who most probably, had also been involved into the commission, as he was occasionally invited to work for the Fabergé London branch. What also transpires, is that the youngest son of Carl Fabergé, Nicolas, who was based in London, also came to supervise the works and even stayed at Sandringham for Christmas 1907. 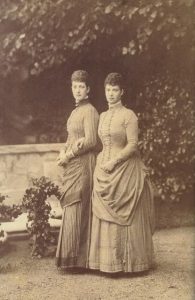 However, these little sculpted figures are not just surviving witnesses to royal whims but tokens of international diplomacy. First of all, they testify to strong sisterly spirit retained by two Danish princesses Alix and Minny who later became queen consorts in Britain and Russia (Queen Alexandra and Empress Maria Feodorovna) respectively. The sisters declared in no uncertain terms their wish to bring two competing empires in alliance against Germany and supported Russo-British relations on every level. The princesses and then queens sustained patronage of Fabergé over their lifetimes. Thus, the opening in London of the firm’s only shop outside the Russian Empire had a role to play in aiding this rapprochement. The fact that the craftsmen from St. Petersburg lived on the Sandringham estate and were regularly entertained by the King Edward VII, who, as witnessed by H.C. Bainbridge, “took the artists round with him and at the usual royal gathering for luncheon, presented them to the Queen, the Prince and the Princess of Wales and his guests” and also took them to the royal hunts, only further proves this point.

The Royal Fabergé offers over 100 objects on view:  more than 60 are Sandringham-linked loans from the Royal Collection Trust  displayed  along with some rare, exquisite objects offered by another significant lender from the US – the dealership A La Vieille Russie, followed by the items lent by the Russian-born, California-based art dealer and collector Andre Ruzhnikov and numerous private collections across the UK. The exhibition also features significant and rarely (or never before) exhibited loans from the Victoria and Albert Museum, the Norwich Castle Museum and Art Gallery, the Lynn Museum and even the National Portrait Gallery. In addition, more than 200 works including films and photographs will highlight the extraordinary talents of the Fabergé makers.

The animal figurines from the Sandringham estate are very rarely put on display and still awaiting their further research. The catalogue  Fabergé’s Animals published by the Royal Collection curator Caroline de Guitaut in 2012 fills in the gap in scholarship by providing  important documentary evidence  from the Royal archives, thus throwing light on the major royal commission in the history of the  Fabergé firm. It also provides photographic portraits of most royal animals, later immortalised in hardstone by Fabergé stone-carvers and jewellers who seem to have captured the true personalities of these creatures. 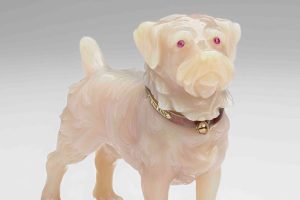 The importance of the catalogue published by Ian Collins lies in further elaborating the points made by Caroline de Guitaut. One will admire the images of the most famous in British racing history champion racehorse Persimmon, whose winnings helped fund the Norfolk estate complete with Persimmon’s horseshoe trophy. Another famous royal animal is  Caesar, King Edward’s favourite Norfolk terrier who became the main hero of 1910 best-seller Where’s Master? and walked immediately after the coffin of King Edward VII on Queen Alexandra’s instructions — the crowned heads of Europe meekly following suit, which completely enraged Kaiser Wilhelm who was part of the procession (looks like the Queen had a splendid sense of humour). It is also impossible not  to appreciate the slender grace of Vassilka, immortalised in silver the favourite Queen Alexandra’s Borzoi who won many prizes for his owner and was a gift from the Tsar Alexander III and Tsarina Marie Feodorovna.

Collins also provides further documentary evidence on the working process in the course of creation of the Sandringham animals and on the life at Sandrigham in general, complete with some amusing anecdotes handed down by the royal family. The catalogue also lovingly documents the life in in Norfolk at the turn of the 20th century and provides valuable backround details, so that the reader ends up with a full picture of the life at Sandringham and local surroundings. As for the little Sandringham farm objects, the reproductions provided by Collins are larger and  better quality, and in many ways more precise than the small scale illustrations in Fabergé’s Animals. Actually, both catalogues perfectly complement each other. What is most valuable in Collins’ publication, is the photos of some formerly unpublished Fabergé objects, such as the plaster portrait of Carl Fabergé by Alfred Pocock (p.30) or the rarest survival of them all — the preparatory plaster mouse model (p. 94), all generously provided by A La Vieille Russie. The reader also has a rare opportunity to see some formerly unpublished Fabergé objects scattered across some local British collections. 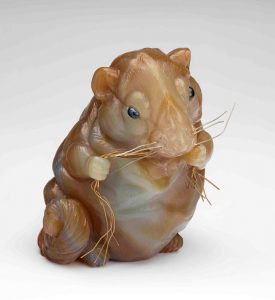 Many similar collections were dispersed or simply destroyed in the course of the Revolution. Queen Alexandra preferred modest Fabergé’s pieces: mostly animals and flowers, because of their charm and quality of the craftsmanship. The Sandringham farm and Queen Alexandra’s array of plant forms ( the sole Fabergé plant collection with 22 out of 26 pieces still intact) are also important as rare survivors. The catalogue provides excellent illustrations of some similar objects and throws light on some nuances of the King’s commission (e.g. the fact that the Sandringham animal figures, were also complemented by images of local and wild animals (p. 53 and 71).

The catalogue sufficiently whets the appetite before visiting the exhibition, and rightly so: end of February some rare pieces will return to the U.S. and disappear for a lengthy period in some private collections across the world. For those unable to attend  and those who study the history of the Fabergé firm and its production methods, as well as the development of the Anglo-Russian relations,  the catalogue is undoubtedly a must-read.

Music Is Nothing Without Expression