UK Premiere of Sergei Loznitsa’s The Trial at the ICA

The Institute of Contemporary Arts (ICA) began its ‘In Focus: Sergei Loznitsa’ series with the UK premiere of The Trial, which included a Q&A session with Loznitsa, joined by film critic Jonathan Romney. The Trial, Loznitsa’s fifth archival documentary film, consists of carefully edited and restored archival footage from Stalin’s 1930 Moscow show trial, which retains the synchronous sound of the original. The 1930 show trial was a staged spectacle, revolving around a crime fabricated by the OGPU. It is a fine example of the harrowingly calculated propaganda the early Soviet government used to try and change the mentality of an entire population. 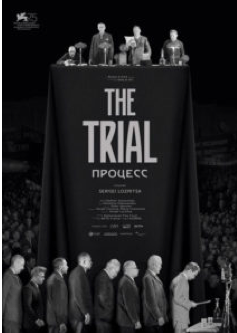 The 1930 show trial took place between 25 November and 7 December, and was initially filmed by a crew led by filmmaker Iakov Posel’skii. The footage was used to make a sound feature film, Industry Party Trial (13 Days), which was released in 1931 and shown in public. The aim of this was to expose conspiracy in the top circles of economic management and to reflect the supposed competence of the Soviet legislative system. This trial was the most successful of the early propagandistic Stalinist trials, receiving significant media attention. The government cleverly exploited people’s perception of the newsreel as historically legitimate, and used it to cement a lie as truth. However, Loznitsa argues that when viewed today with hindsight, the footage does indeed expose a certain truth: the repressive nature of the Stalinist government.

The tragedy is that while the crime was fabricated, the trial and harsh punishments were real. The OGPU crafted a case involving eight ‘suspects’, who were prominent economists, academics and politicians of the intelligentsia. The men were forced to comply, or else have their families shot. These eight innocent men were then accused of being members of the so-called Industrial Party, and plotting to destabilise and eventually overthrow the Soviet government, with the help of foreign intervention. Stalin had personally published a recommendation that the French Prime Minister, Poincaré, should somehow be involved in this plot. Like clockwork, the defendants confessed to having conspired with Poincaré himself. Loznitsa noted, with a wry smile, that an angry telegram later arrived from the French Foreign Minister to complain. In fact, France had no such plans to overthrow the USSR; the government simply wished to instil a fear of foreign enemies, and France was a convenient scapegoat.  Loznitsa explained why he believes Stalin chose France: Napoleon had tried and failed to invade the Russian Empire. It fitted with history, fitted with people’s existing notion of France, and therefore made a convincing narrative. 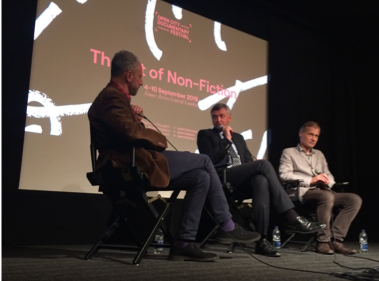 For the current-day viewer, The Trial is an extraordinary display of choreographic and performative mechanics. The suspects were questioned for days in a courtroom clearly set up for filming: large microphones surrounded the room and the audience members shielded their eyes, perhaps from the bright lights, perhaps from the cameras. Like any film set, actors were abundant. For example, the military personnel seen marching were not soldiers – they were the film directors who had worked with the ‘accused’ to train them into complying with the case. Loznitsa mentioned the rumours he had heard that drugs and hypnosis may have been involved in this training process.

The defendants show every sign of being guilty: they are nervous, uncomfortable, pausing for agonisingly slow sips of water to help get their words out. They sincerely confess to their severe crimes against the proletariat and insist that they never wish to deviate from the Bolshevik line of ideology again. One defendant expressed his utmost desire to continue working towards the five-year plan. By all appearances, the Soviet legislative system had not only saved the USSR from economic disaster and foreign invasion, but had also successfully cured the defendants of their anti-Communist ideas. Despite this, the defendants were nonetheless condemned to various harsh consequences. A few of the defendants were given 10 years’ imprisonment, others faced death sentences commuted to 10 years’ imprisonment, and two were given death sentences and executed a few years after the trial. As Loznitsa’s epilogue in The Trial informs, the Industrial Party never even existed; innocent men were reduced to scapegoats and sacrificed. According to Loznitsa, the show trial was a portent of the Great Terror which would later ensue.

Ironically, one of the chief prosecutors of the trial, Nikolai Krylenko, was arrested and executed in 1938. He had been falsely accused of belonging to the enigmatic but undoubtedly sinister ‘Fascist Terrorist Organisation of Mountaineers and Tourists’. Loznitsa explained that Industry Party Trial (13 Days) could not be shown in public very often, due to a lack of cinemas with sound technology. Nevertheless, the film was regularly edited over the years to remove all traces of instigators of the trial who were later shot, including Krylenko.

Loznitsa’s The Trial consists of a careful digital restoration of 125 minutes’ worth of footage from the Krasnogorsk Film Archives. Like Loznitsa’s previous archival films, Blockade, Revue, and The Event, The Trial is free from narration. The director encourages the viewer to watch events unfurl without the influence of his own voice. The Trial is a chronological sequence of footage, with captions only indicating the names of the defendants. The court scenes are interspersed with footage of a street protest demanding ‘death to saboteurs and enemies of the proletarian revolution’. The protest, unlike the trial itself, was not staged. This reflects the ease with which the government managed to trick its population, and is perhaps an urgent warning on Loznitsa’s part that we should be wary of how we consume information today. His decision to include footage of the protest is, perhaps, a sign of his inevitable artistic license.

Like Loznitza’s previous archival films, The Trial encourages us to consider the contemporary significance of an historical event, to question our perception of archival footage as truth, and to reflect on how we consume information in an era of ‘fake news’. Remarkably, The Trial makes the viewer as much part of the experiment as the defendants, prosecutors and court audience themselves.