In November 2015, the Russian Government introduced ‘Plato’: a punitive toll system for heavy lorries on federal highways that made the businesses of long distance drivers unviable. Writer and Director Konstantin Selin tells the story of the drivers’ struggle against the system in his award-winning documentary ‘Chronicles of a Revolution that Didn’t Happen’ (2017). It received its UK premier at Pushkin House on the 24th of May. 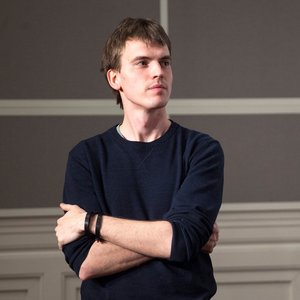 Thus begins Konstantin Selin’s documentary. Abruptly, we are introduced to our protagonists: leather jacket-clad truck drivers who speak with a liberal smattering of swear words. They could not be further from our archetype of ‘the revolutionary’, but this is exactly Selin’s point. We are not allowed to forget that these men are not only would-be ‘revolutionaries’, but also husbands and fathers. ‘I don’t know what discipline the [exam] was in’, one tells his son as he drives to join the protest outside Moscow, ‘But you should have known more. Listen to your mother.’ By including these ‘everyday’ exchanges, Selin brilliantly illustrates that there is no boundary between the personal and the political, that revolutionaries are not narrow-minded ideologues, but humans with families to care for and children to chastise.

Throughout the film, we sense that the drivers are facing an un-fightable and un-nameable enemy. The anonymous ‘they’ is the object of most of their cursing. ‘Step by step, they’re enslaving us’, one man says. But who is to blame? A passive populace too disinterested to help? Or a kleptocratic regime intent on enriching itself at the expense of its people? Selin deliberately leaves the question unanswered. The cinematography subtly captures the sense of a futile fight. Selin regularly intersperses shots of silent snowfall or raindrops trickling down a window. Just as the drivers endure the relentless forces of nature, so they endure the relentless exploitation from the powers above, and indifference from the society they are trying to change.

Pathos and dry humour intermingle throughout, taking us on a jolting emotional journey. One moment we are with a despondent driver reflecting on the futility of their struggle: ‘Cats scratch my soul […] we won’t overcome’, he says. The next, we are in the midst of a cheerful New Year’s Eve party in the back of a lorry, with Selin humorously including a close-up on a copy of The Dialogues of Plato – an amusingly out of place philosophical tome, and a clear tongue-in-cheek reference to the ‘Plato’ system by the drivers themselves. 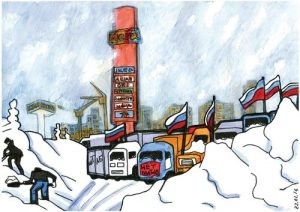 Selin deftly moves us from the domestic to the national. Intimate shots of the drivers’ homes and personal interactions are punctuated with official news reports on the protest. By including these, Selin highlights the jarring gap between the drivers’ lived experiences and their representation in national media. Perhaps the most jarring moment is when they gather in a roadside café to watch President Putin’s end of year address. The scene begins with official footage, showing us the gilded splendour of the Kremlin as Putin enters St. George’s Hall with pomp worthy of an Emperor. We then shift jarringly to the humble café of the drivers, with its tired wallpaper and rudimentary furnishing. The President speaks from a dated TV screen on the wall. When Putin speaks blithely of the country’s ‘surmountable’ economic problems, the bitter irony is hard to miss.

Selin captures the poignant and distinctly Russian character of the protest by highlighting the drivers’ attitude towards the authorities. While they rage against ‘the oligarchs’, they significantly do not lay the blame at the Kremlin’s door. As the centuries-old Russian saying goes: ‘Good Tsar, bad Boyars’. We are left with a distinct feeling of dramatic irony when the truck drivers make their appeal to President Putin: ‘Vladimir Vladimirovich, please help your people’, they say to a shakily held camera. This was in the winter of 2015. Three years later, the President has yet to acknowledge their plea.

Konstantin Selin’s unique documentary offers a window onto an unlikely episode of political protest virtually unreported in the West. There are no mass rallies, no iconic images of Russia’s capital, and no chants calling for regime change. Unlike the ‘Bolotnaya’ protests of 2011/12 which were widely reported in the Western media, Selin shows us a movement with no leader – no Navalny equivalent – but no less admirable for the lack of one. The film symbolically ends with a sunset, signalling the denouement of the truck drivers’ unsuccessful revolution. But the thing about the sun is that, though it may set, it always rises again.