The Union of Youth at the State Russian Museum

The story of the early years of modern Russian art is one featuring groups, societies, and clubs of artists.  It is a narrative of how in Moscow and Saint Petersburg painters, sculptors, and critics formed collectives within which individuals could pursue their experiments and which could secure the space for exhibitions and the publicity that their members struggled to find individually.  In Moscow, the ‘Knave (or Jack) of Diamonds’ group held its first exhibition in December 1910, allowing the public to see the work of artists like Kasimir Malevich, Natalia Goncharova, Mikhail Larionov, and David Burliuk.  Some of the participants were actual members of the group, others were friends and sympathetic supporters: all, however, benefitted from the collective exposure of a group exhibition.  If innovation was sometimes a very individual process then a sense of community certainly helped to bring one’s work to the public, even if bemusement and outrage were often the standard reception.

Bridging the distance between Moscow and Saint Petersburg, as this exhibition reminds us, the capital was the home of the ‘Union of Youth’ group (Soyuz Molodyozhi) celebrated in the State Russian Museum’s summer exhibition. Founded by Levkiy Zheverzheev, a patron of the visual arts, along with the artists Rotislav Voinov, Iosif Shkolnik, Eduard Spandikov, Saveliy Shleyfer, and Mikhail Matyushin, the Union was dedicated not only to the display of new works but to the dialogue between Russian art and the movements sweeping into Russia from the galleries and sale rooms of Paris and Berlin.  Between March 1910 and January 1914 the Union staged seven exhibitions of works by its members and those sympathetic to its aims. There was also a series of public debates on new artistic trends, and the publication of a journal within which ideas and theories could be further discussed. 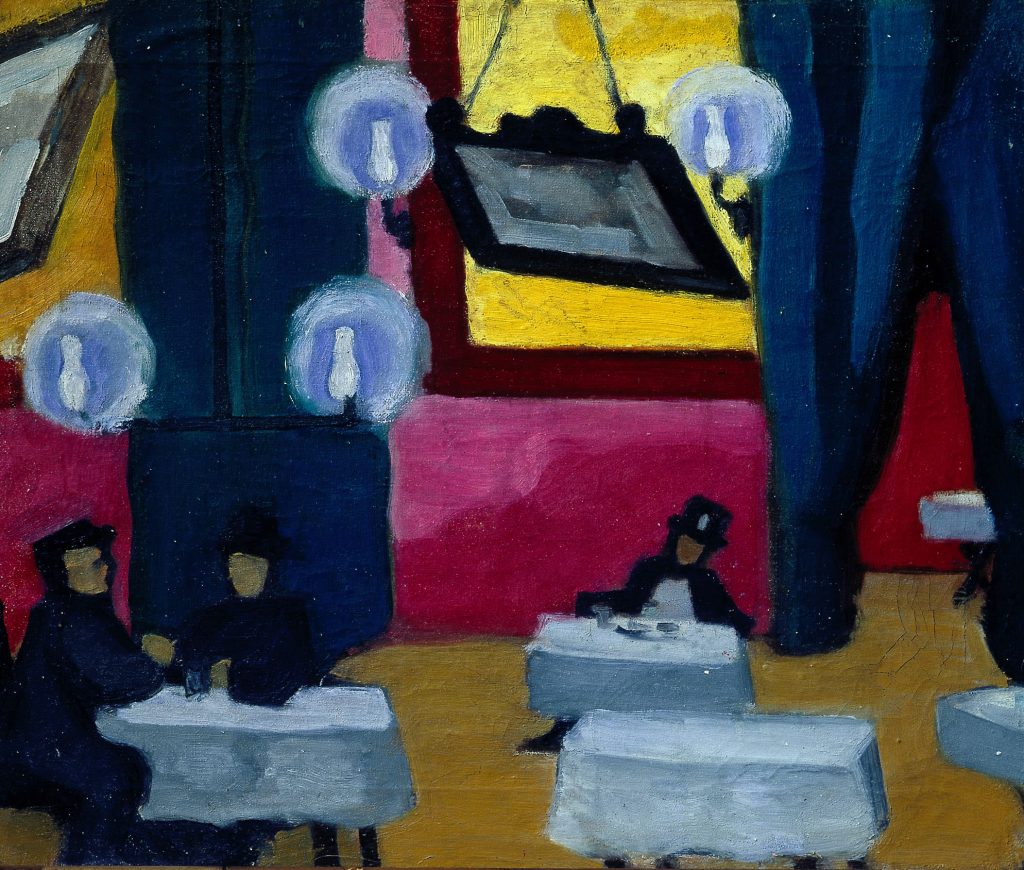 The State Russian Museum’s holdings, both in terms of artworks and documents, relating to the Union are immense, and in the rooms of this exhibition we get a sense of the works the Union brought to the attention of the capital’s public.  Bold and daring in colour and form, over two hundred of these paintings and drawings retain their ability to surprise a viewer, even though a century has passed since they first went on display.  Entering the first room of the exhibition brings one face to face with Olga Rozanova’s brightly coloured portraits and scenes.  In ‘At the Café’ (1912) the blues, greens, and yellows jostle for attention around the seated couple. The man has his head in his hands; the woman clutches a class in a left hand at the end of an arm that sweeps across the table. Rozanova had used the same bright colours in ‘Restaurant’ (1911) but there the figures are faceless, seen from a distance in a composition dominated by the green of the curtains and the white of the tablecloths and light bulbs.  While it uses a Fauvist palette, the earlier picture suggests an ordered calm, whereas a year later the scene is filled with barely contained emotional energy.

In this plurality Rozanova is by no means alone. Other artists represented here in the exhibition revel in the possibilities of different styles and techniques.  After the realism of the Nineteenth Century the Union of Youth embraced the new and the daring, and as in other European countries we retrospectively see in these artworks the potential of Modernism alongside the boundaries against which its practitioners often found themselves pushing.

Although the Union was based in St. Petersburg, the influence of Paris on its members is clear and strong.  The colour and pattern experiments of Henri Matisse are taken up in the landscapes and still life paintings of Rozanova, Iosif Shkolnik, and Aleksandr Gaush, where tablecloths and wall-hangings merge to render foreground and background almost indistinguishable.  Elsewhere, Cezanne’s work informs the landscapes of Saveliy Shleyfer and Benjamin Belkin, while Eduard Spandikov’s sketches show him carefully noting the Picasso paintings that he has seen and dutifully copied for future reference.  With Russian collectors buying up the latest works in the Paris galleries, domestic artists benefitted from the enlarged awareness of works produced outside of the country, feeling their own Unions and Societies to be part of an international ‘scene’.  War and Revolution would close many of these channels, leading to a more distinctively Russian version of Modernism, but the excitement of this initial exposure would prove to be irreversible.  The visitor is told that plans drawn up by the Union for a joint exhibition with German Expressionist painters fell victim to other events, but the fact that such things were planned is itself highly significant.

Of equal significance is the desire to pursue experimentation in other genres alongside the visual arts.  Designs for stage sets and costumes reveal a playful sense of colour and form.  Those who know of Vladimir Tatlin largely through the design of his unbuilt Monument to the Third International (1919-1920) may be surprised to find him represented here by some early paintings that acknowledge a clear debt to Matisse, and also the set designs for a production of ‘Tsar Maximyan and His Disobedient Son Adolf’ (1911), where giant cats frame the stage in a profusion of reds, blues, and yellows.  More famous, perhaps, are Malevich’s designs for the opera ‘Victory Over the Sun’ (1913), where we see, almost as an afterthought, the ‘Black Square’ motif that will soon come to hold such importance in his work.  Alongside early versions of Malevich’s ‘Cubo-Futurist’ images in the later rooms of the exhibition there is a poster advertising a performance of the play ‘Vladimir Mayakovsky’, in which another of the central figures of early-Soviet culture may be seen refining his avant-garde credentials. 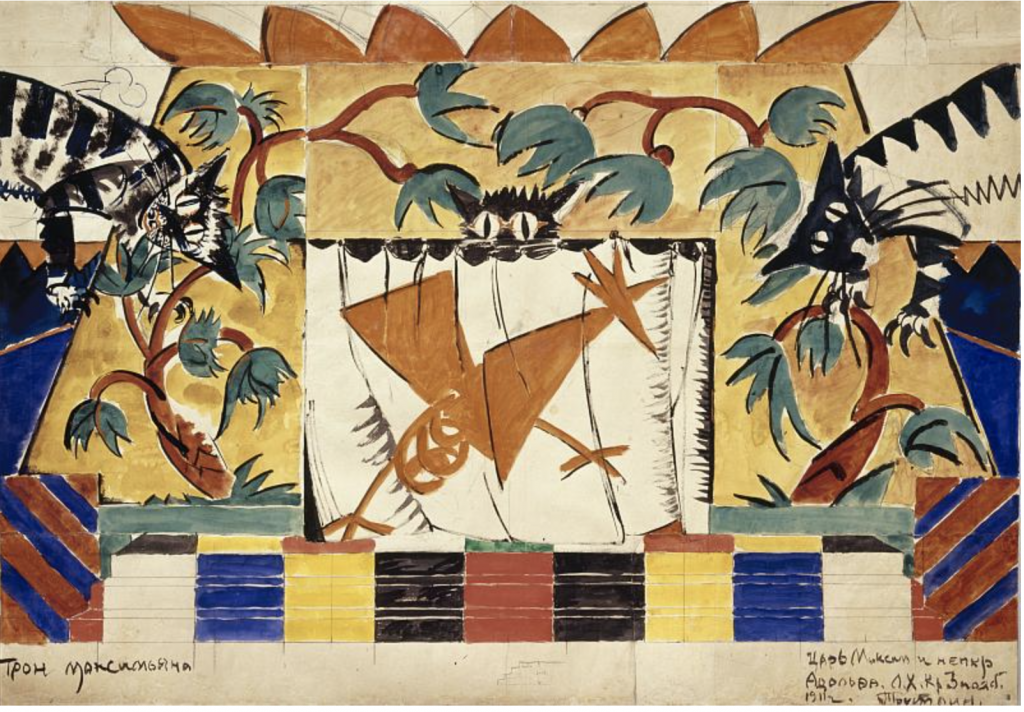 Indeed, some of the names featured in the exhibition will be better known than others to most visitors. Some, like Malevich, Goncharova, Tatlin, or Pavel Filonov are represented en masse in the upper-level rooms in the Museum’s Benois Wing. In the exhibition, though, they appear not as canonical figures in Russian modernism, but as artists finding their style within a larger community.  While not necessarily ‘members’ of the Union they participated in exhibitions in a sense of common cause and interest – a desire to make the Russian public as aware as possible of the new directions in which the visual arts were headed.  The outbreak of war in 1914 and the rise in nationalist conservatism that accompanied it changed the cultural landscape in Russia, but having experimented with the freedoms celebrated here the avant-garde would find other ways of responding to the rapidly changing world in which it found itself.  Events on the streets of Petrograd in 1917 would ensure that the Union of Youth would come of age in a world transformed beyond even its expectations.  This excellent exhibition, the first ever to be devoted solely to the Union of Youth’s activities, allows us a glimpse into a moment of thrilling promise, when everything was about to be made new and everything seemed possible.

The Union of Youth is at the State Russian Museum, Saint Petersburg, until 2 September.