The Siege of Leningrad in Art and Memories of Russian artists

27 January 1944 is a sacred date in the memory of most Leningraders. On this day, seventy-six years ago, the siege of Leningrad was finally lifted after 872 days of total blockade imposed on the city by the Axis powers during the Second World War.

‘I’ve heard on the radio that they will allow us to walk the streets during the night of 27/28 January… It is a joy to wait and realise that happiness is coming…’, noted in her diary Olga Matyushina, second wife of prominent Russian artist Mikhail Matyushin, who stayed in besieged Leningrad throughout the war and celebrated this memorable day together with the rest of the liberated citizens.

The Mikhail Matyushin museum houses the St Petersburg Museum of the Avant Garde and is holding an exhibition of works by the artists who lived and worked during the siege of Leningrad 1941-1944. It features seventy drawings and oils created by eleven artists which tell of the tragic time in the city’s history. There are several watercolours by Tatiana Glebova from her series ‘The Horrors of War for a peaceful populace’ and ‘Besieged Leningrad’ which stand out from the rest of the artworks, owing to the unusually bright colours the artist chose to express her personal story of the blockade. 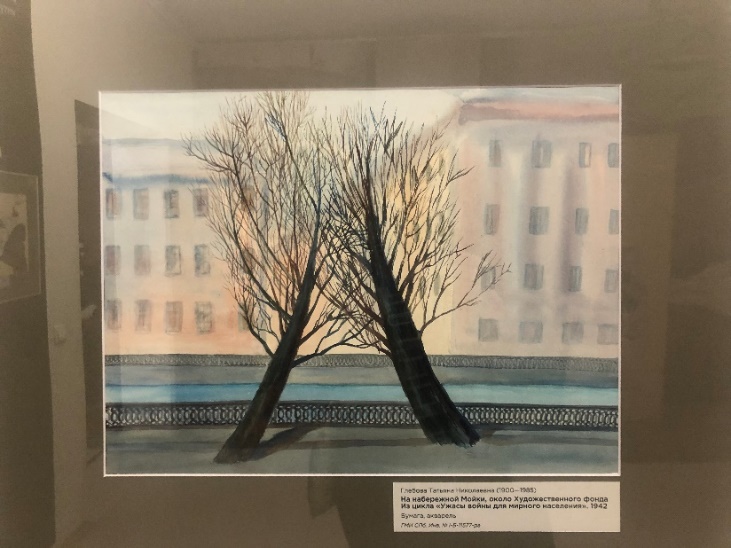 Tatiana Glebova, the Moika Embankment near the Art Fund, watercolour on paper. From the series “Horrors of war for civilians”, 1942 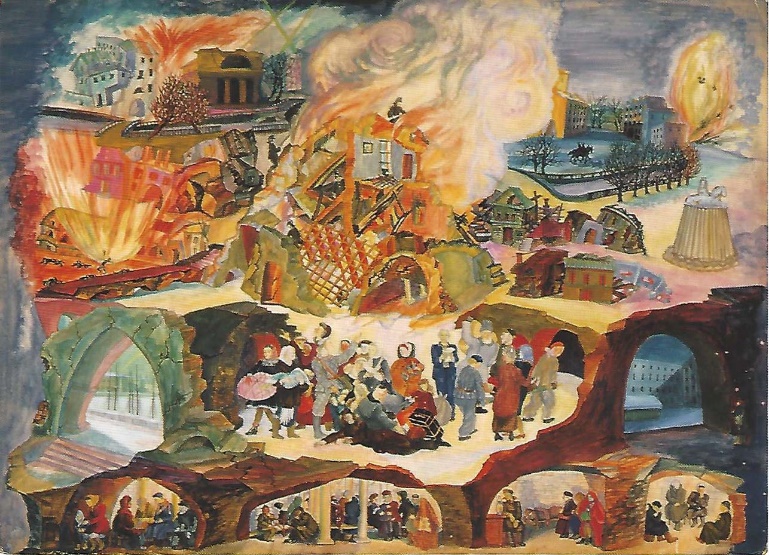 Tatiana Glebova, Scenes in besieged Leningrad, watercolour and tempera on cardboard. From the series “Horrors of War for. peaceful populace”. 1942

Tatiana was a dedicated student and follower of Pavel Filonov, founder of Analytical Realism, who perished during the siege. Tatiana created her series of watercolours in the besieged city before she was evacuated to Almaty, Kazakhstan in the summer of 1942.

There are also works by other of Filonov’s followers: Pavel Kondratyev, Aleftina Mordvinova, Vsevolod Sulimo-Samuilo.

The sketches of the victims of starvation at the Erisman morgue by Alexei Pahomov, works that were not for public display for many years after the war, are especially poignant. 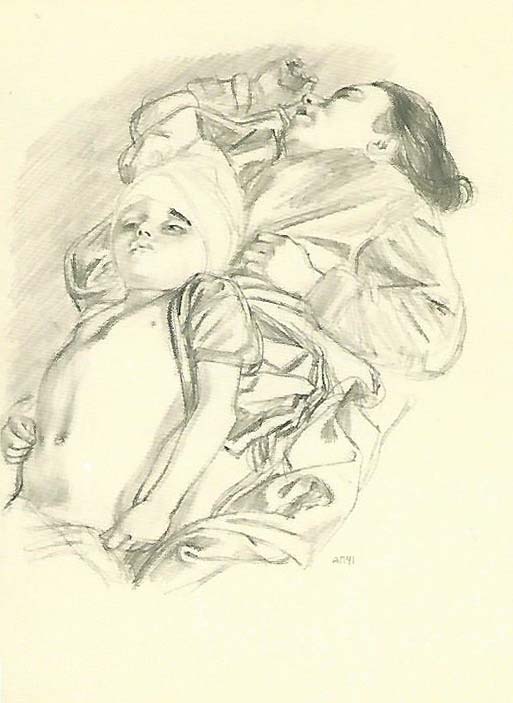 Alexei Pakhomov, Lying Woman with a child, pencil on paper, 1941

Alexander Nikolsky’s watercolours help one imagine walking the streets of the frozen city during the severe winter of 1941-42, when the temperature fell below -25C and Leningraders were cut off from all essential supplies, heating, electricity and water. As an established and highly skilled architect, Nikolsky brilliantly captured some of the famous architectural sights of the city camouflaged by artists.

‘Leningrad in the Siege’ by Vasily Kaluzhnin provides an atmospheric impression of the city centre during winter when public transport came to a standstill and people had to negotiate their way through snowdrifts to bring water from the River Neva on sledges. These memories are still vivid for Leningrad artist Elena Marttila (b 1923) – one of the few living witnesses of that time. 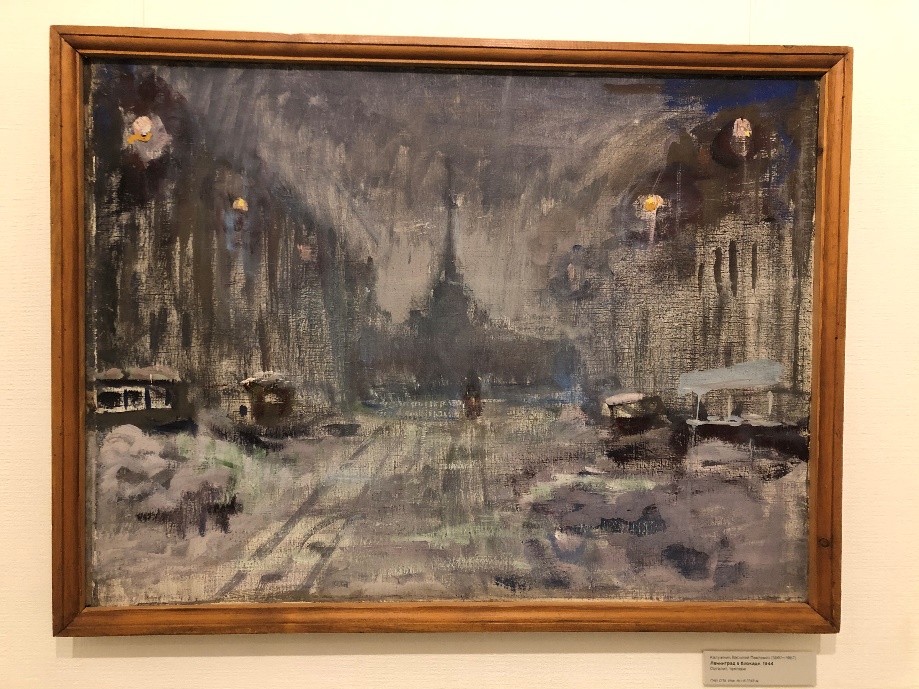 Vasily Kaluzhnin, Leningrad in the Siege, tempera on hardboard, 1944

Martilla had just turned 18 when, on September 8th 1941, the city was surrounded by the Nazis. A dedicated young art school graduate, she continued to work throughout the war, creating a series of sketches during the deadly winter of 1941-42, when the daily bread ration dropped to 125g and the death toll was up to 7,000 civilians a day. Memories of war have haunted her ever since. 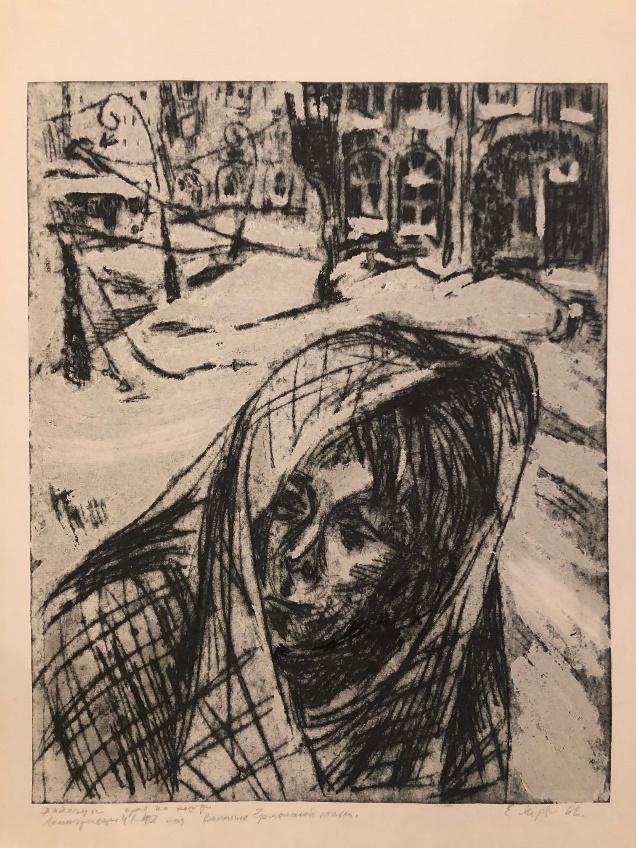 Elena Marttila, I will make it. Engarving on cardboard, 1962. Dedicated to Valentina Yermolaeva, who died from starvation in March 1942. 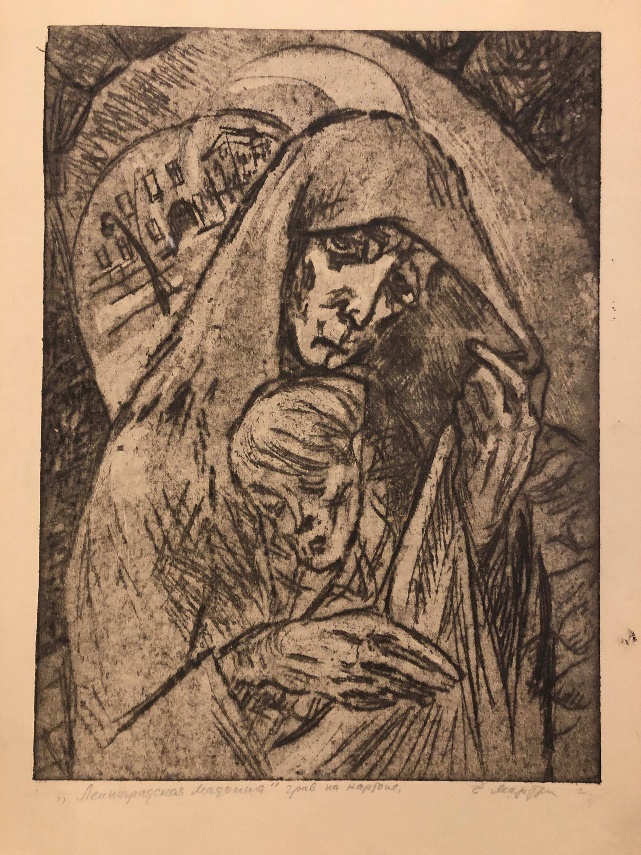 After the war, Elena returned to her studies but refused to follow the strict canons of the state doctrine of Socialist Realism. She developed her sketches into lithographs and engravings on cardboard. In her predominately black and white images, objects appear almost blurry – just as how starving Leningraders perceived them. Looking at them one feels transported through time and connected to the artist’s experiences of the siege.

Nine of Elena’s drawings, engravings on cardboard and lithographs from her ‘Leningrad and Leningraders’ series, including her portrait ‘Facing death’ from February 1942 are currently on display at the St Petersburg Union of Artists as part of the ‘Dedication to besieged Leningrad’ art exhibition which features selected pieces only by living artist-veterans who personally experienced the siege. 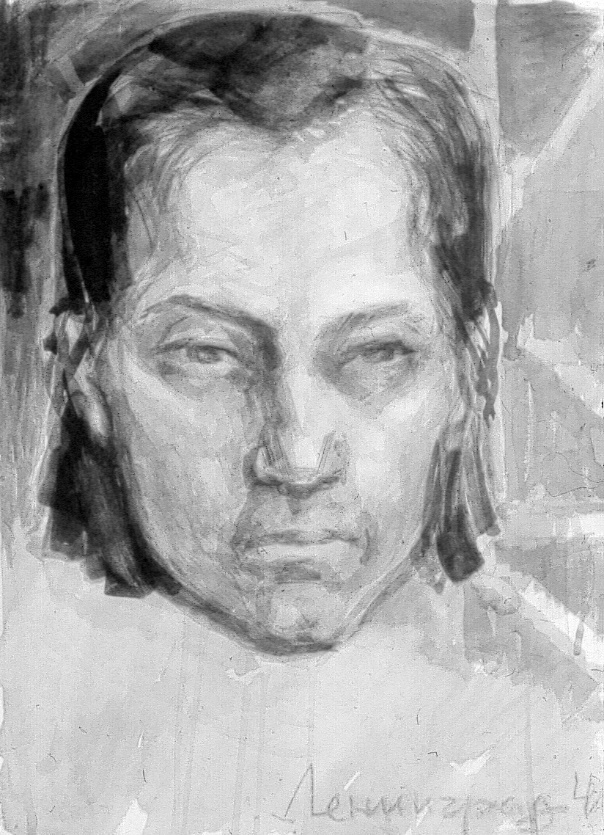 There are also works by representatives of the second and third post-war generations who explore family and cultural memories of the time in visual art.

Sculptor Alexander Gordin was born in Leningrad several weeks after the outbreak of the war in June 1941, and was evacuated with his mother and sister in 1942. He says that he can hardly remember his childhood until he went to school: “as though it has been erased from my memory”, admits Alexander. His sculptural compositions “Blockade Madonna” and “Fetching Water” made out of steel and glass, are dedicated to his mother and all the women who tried to preserve their children’s lives. Alexander created his self-portrait as a newborn in the arms of a seated woman. 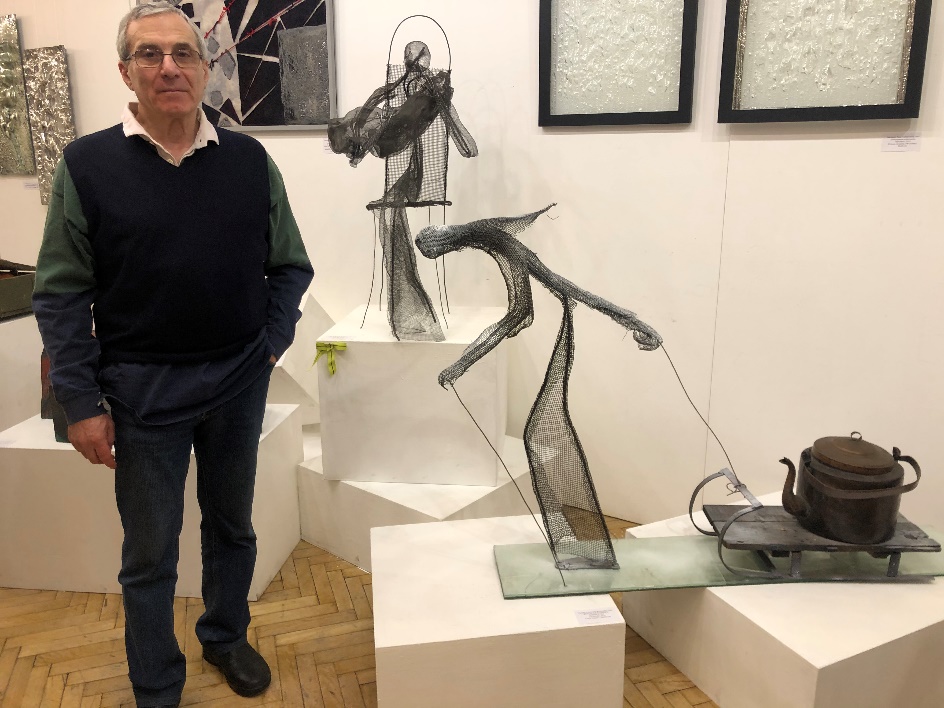 The siege of Leningrad took over 800,000 lives and touched many more across generations. Those born and bred in Leningrad often say that the Siege is part of their DNA. This makes memories of that time even more precious as years go by; the experiences and aspirations of witnesses should be heard and remembered for future generations to come.

The exhibition ‘Dedication to besieged Leningrad’ is on display at the St Petersburg Union of Artists until 1 February 2020. 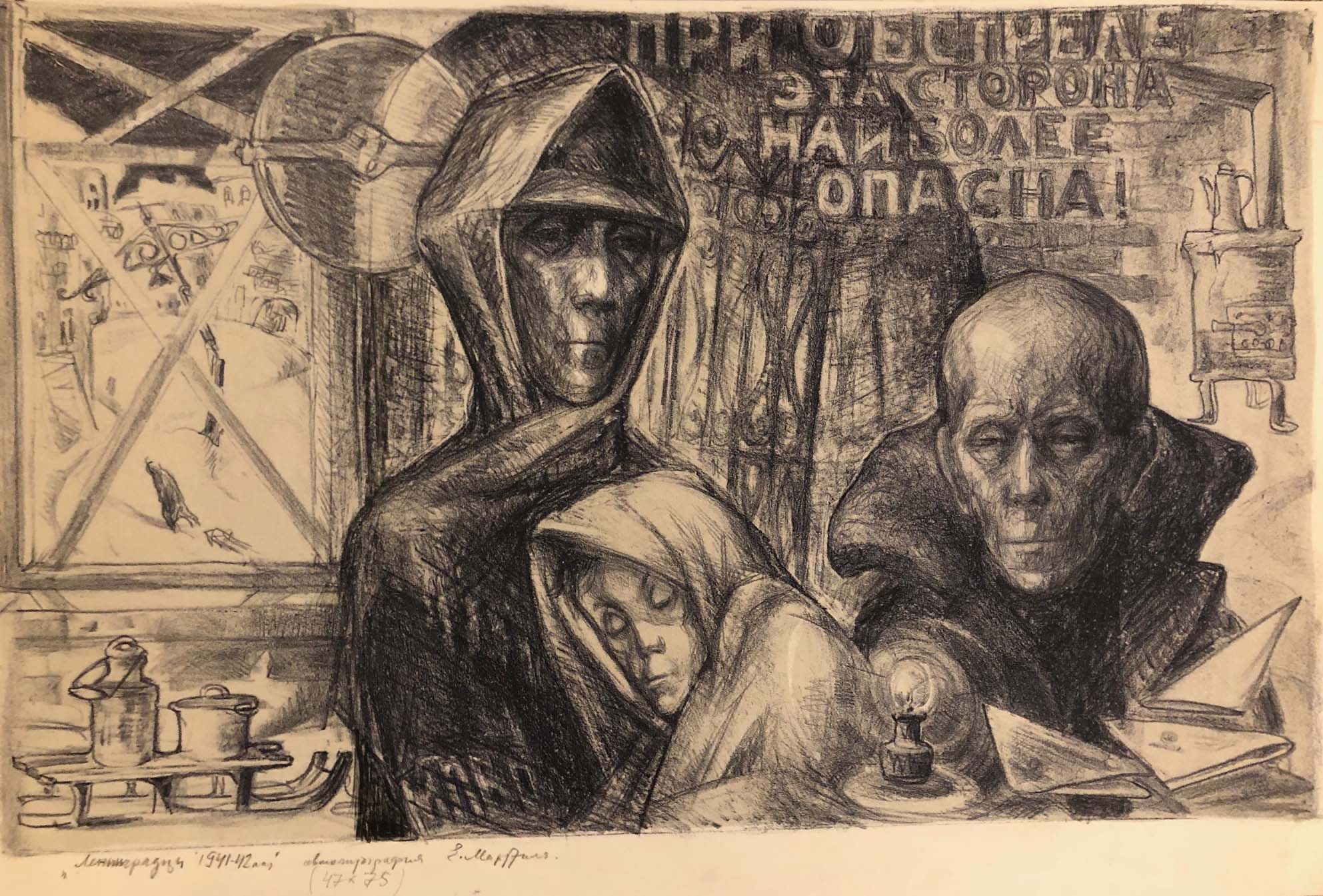 ‘God forbid for any human to experience what the inhabitants of the besieged city had to face during the war years. It was a long medieval torture applied to a large group of civilians in the middle of the 20th century. We must make sure that it never happens again. We should remember and thank those Leningraders who went through that Christian torment and thus created a certain spiritual and ethical basis for future generations, which rests on strength, dedication, compassion, and selflessness”, insists Elena Marttila.

Twenty-six of Elena Marttila’s works from her Leningrad series are on display in the museum of St Petersburg College of Traditional Culture at 51, Dalnovostochny Prospekt until 5 February 2020.

мы is the Russian word for ‘We’ – until 16 October