The Marylebone Theatre is London’s newest cross-cultural, performance space. Once known as the Steiner Hall, the theatre has undergone an extensive refurbishment, as a result of which it is now a versatile, state-of-the-art space, launching with an exciting programme of theatre performances, concerts, dance and spoken word events. We spoke with Alexander Gifford, the Artistic Director of the theatre to find out more. 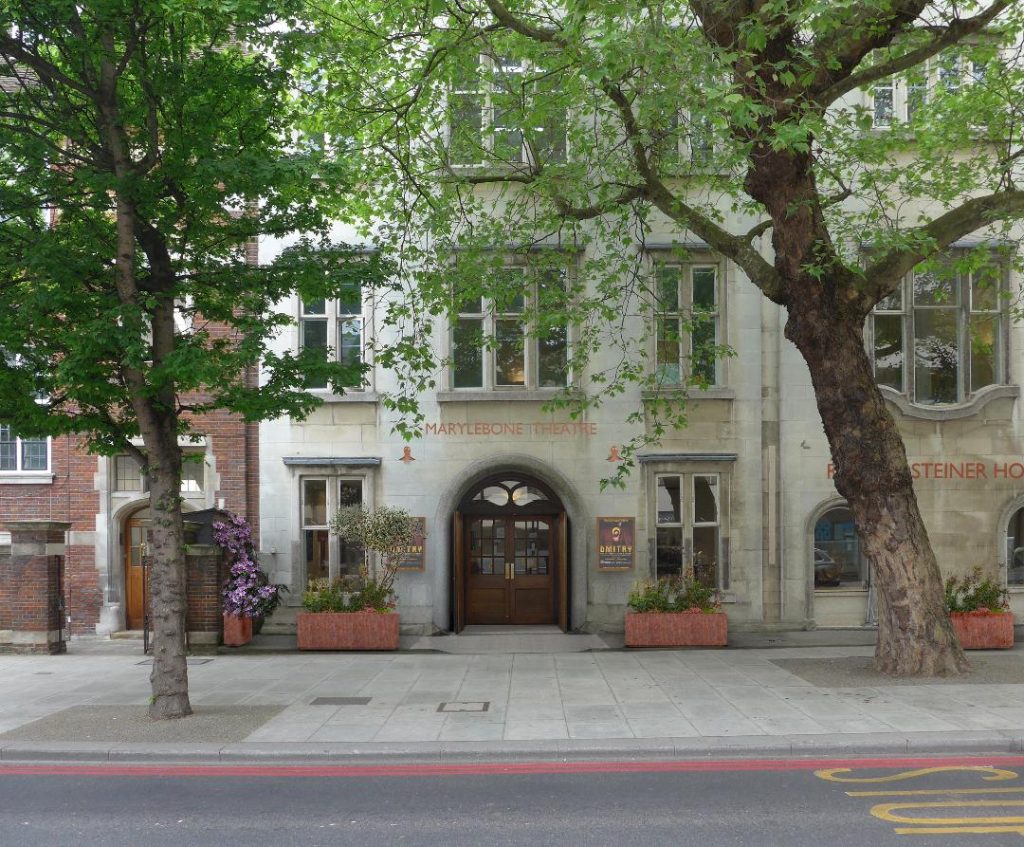 CGI image of the outside of the theatre

Elena Shampanova: Dear Alexander, congratulations on the opening! Please could you tell us more about The Marylebone Theatre as London’s newest cross-cultural, performance space once known as the Steiner Hall.

Alexander Gifford: Rudolf Steiner was a leading visionary and social activist in the early decades of the twentieth century. In the aftermath of World War One, he developed impressive initiatives for the remaking of human society, including what has become the largest alternative educational movement in the world, Waldorf education. In the last years of his life, Steiner’s followers bought a large property just off Baker Street. As the Steiner Hall, the building played host to popular, public performances of conventional plays and concerts as well as more unique performances inspired by Steiner’s ideas. Over the following decades, it built a reputation as a singularly inspirational venue – though in recent times it became unproductive and declined to relative anonymity.

Now, as it approaches its one hundredth year, the Steiner Hall is being rebranded and relaunched as the Marylebone Theatre with a programme, which remains true to the original vision of Steiner with a special mission to focus that vision on the most pressing issues of the present times. It will open to the public on 29th Sept with DMITRY, an explosive political thriller, inspired by an unfinished play by the great German author, Schiller – scripted by the brilliant Peter Oswald (formerly playwright in residence at the Globe) and to be directed by the legendary Tim Supple. Set in 1604, the play tells the story of the man known to history as the “false Dmitry” – a pretender to the throne of Russia whose claims turned out to be part of a Western-backed plot to overthrow the corrupt regime of Russia’s tsar, Boris Godunov. It is an extraordinarily pertinent investigation of the historical tensions between Russia and the West and how those tensions can be positively transformed. It will be lavishly staged, feature a superb cast and will, I hope, immediately establish the theatre as an important new player on the London cultural scene. 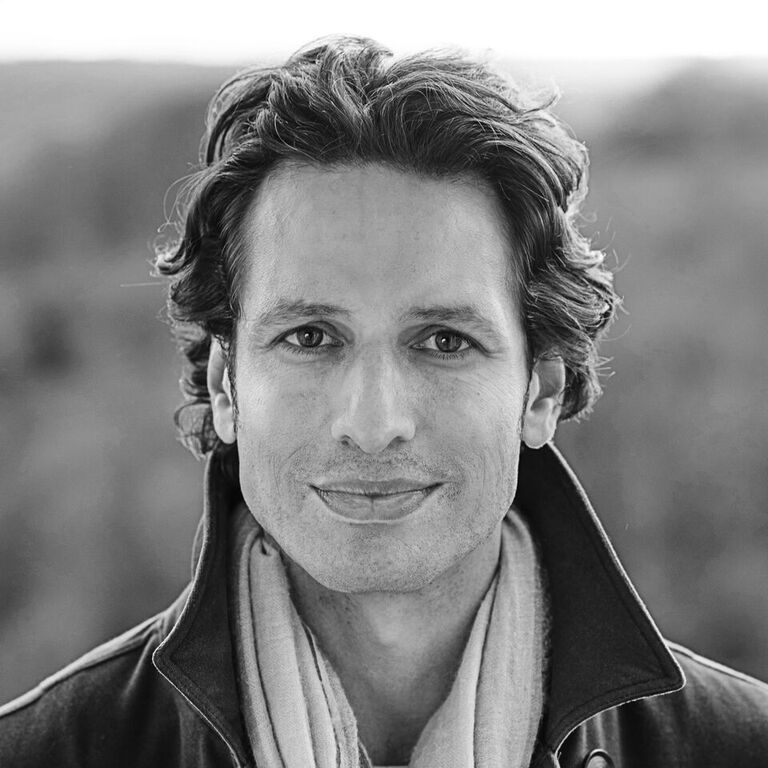 Elena Shampanova: That is very exciting! Why did you decide to open a new theatre in London?

Alexander Gifford: The impulse to open the Marylebone initially came from a new and dynamic board of trustees at the Steiner Hall. Having received a generous gift of money, they took the bold decision to renovate and re-enliven the space. I was appointed in May 2021 as the Artistic Director, having previously run two theatre companies and worked as a teacher in a Waldorf school. For me, the job came at a perfect time, enabling me to bring together the different strands of my career experience. What excites me is that I have the chance to create new and brilliant works of performance art, which bring Steiner’s visionary genius to bear on our current world-crisis. In respect to DMITRY, it is important to say that Steiner did in fact speak about the events on which it is based. He urged those around him to research the history of the “false Dmitry”, hinting that it held the key to a more profound understanding of Russia’s relationship to the West and how it might be healed. Underpinning Steiner’s whole approach to history and culture was a vision of spiritual dimensions and how the human being takes part in those. Schiller advocated the bringing together of religion and art – the union of the Good and the Beautiful – and, in essence, that sums up the reason and driving force of our whole project.

I should mention that we have so far – luckily – avoided the worst effects of the Covid crisis. The renovation works to the theatre took place, unimpeded, during the lockdown period. Opening now, we feel (relatively!) confident that audiences are ready to return in number – and that, in fact, we could catch a wave of renewed passion for great drama. DMITRY is in every sense a bold production: it requires 16 actors, a substantial set; it is a roller-coaster ride through the battles and intrigues of the seventeen century right to the heart of the politics of our times. From a financial perspective, it could be regarded as reckless way to open a new venue. Personally, I am confident that the sheer quality of the writing and the astonishing relevance of the content will ensure that we catch the popular imagination and become the hottest ticket in town. Having recently partnered with Russian Art and Culture to create a wonderful fundraiser event for Ukraine, I am hopeful that its many followers and fans will swing behind us by buying tickets and coming in force to see the show. I have no doubt that it will be a deeply moving experience for anyone who carries Russia’s painful destiny in his/her heart and yearns for its redemption. 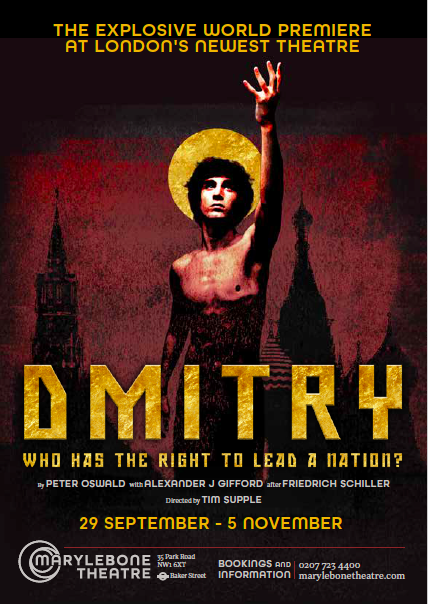 Elena Shampanova: Thank you, Alexander. Please could you tell us a bit more about your role in this project and about those who work with you?

Alexander Gifford: I am the Artistic Director of the theatre, which means I have the responsibility of determining the venue’s overall creative identity. I have to find and develop the right projects, work with directors and writers, programme in-coming companies and, generally, make sure the theatre is productive and attractive to audiences. I arrived in the post with a handful of key allies, whose work I knew would be perfect for the venue. Peter Oswald is a writer of genius, whose work I have loved since encountering it at the Globe theatre, where Peter used to be the resident playwright under the great Mark Rylance (one of our patrons). On getting the job at the Marylebone, my first email was to Peter to ask him what scripts he might have available for production. His response was to send me Demetrius, a play that had been commissioned by the National Theatre, optioned by the Donmar – but not performed by either. I knew instantly that it was a potentially dazzling, but currently very rough diamond. Over the next nine months, Peter and I joined forces to polish and improve the text, a process which culminated in a round-table reading, attended by the director Tim Supple. Tim is another theatre genius, whose work I have adored for decades, having been ravished by his famous Indian version of A Midsummer’s Night Dream. To my great joy, Tim loved the project and the venue and immediately signed up to direct. Since then, he and I have put in place a first class team of set and lighting designers, cast our actors and overseen a refurbishment of the back-stage areas. 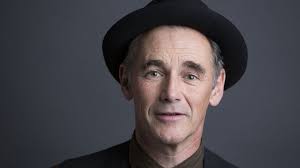 One of the theatre’s biggest challenges, of course, is simply to get known. As a start-up venture, it is essential that we have an excellent marketing and publicity team. In this respect, we are lucky to have teamed up with Chloe Nelkin Consulting and N9 Design, who have so far overseen the creation of our logo and website, production imagery and, generally, overseen a successful first announcement. We were recently thrilled to be featured in the Guardian and from September onwards, expect to see ourselves in more features and for our posters to be visible all over London at bus-stops and in the underground.

Elena Shampanova: Fantastic! Please tell us, how is The Marylebone Theatre different from other theatres in London?

Alexander Gifford: I always say I want the Marylebone to stand amongst the best medium-sized theatres in London in terms of aesthetic excellence – but apart from them in terms of content and purpose. What I mean by that is that we must be indisputably first-class without conforming to the sometimes philistine norms of commercial theatre. A drama teacher of mine used to say that “first, television imitated the stage, which was comic; now, the stage imitates film, which is tragic”. What he meant is that modern theatre has become too tied to the linguistic naturalism, which belongs to the screen, but which reduces stage expression to something too small and unpoetic. At the Marylebone Theatre, we want to stand resolutely against this tendency by developing plays, which refresh the great poetic tradition of Shakespeare and Schiller in a modern context. DMITRY, I believe, achieves this. It has the scale and majesty of the classical past yet precisely investigates the sicknesses and dilemmas of the present. Going forward, I would like this to be the cornerstone of our unique identity: that we create work, which fosters a renewed poetic utterance for our times. I would have to say that exploring the spiritual dimension of human experience will also be key: we hope to create plays, which restore the wisdom of Greek theatre, in which man’s destiny was never seen in isolation from the influence of a higher, divine world. A focus of our exploration will be the question: what is sacred theatre and how can it speak powerfully to our secular times?

Finally, I should say that I would like the Marylebone to be a truly international theatre, which welcomes artists from abroad and creates work, which addresses the different destinies of the earth’s multiplicity of peoples. I have a special love for Russian literature and history and am sure that this always be a major focus of our creative exploration.

Elena Shampanova: Thank you, Alexander. Could you share with us, what the future plans for The Marylebone Theatre are?

Alexander Gifford: We currently have a number of exciting projects in the pipe-line. Plays by Norwegian and American writers; a version for the stage of the Iranian epic, The Shahnameh. Our first season of concerts will kick off in December with performances by first-class classical musicians, including the Carducci Quartet and Stile Antico. We will also host a delightful Christmas play called A Sherlock Carol. I am excited that next spring we will also be producing one of my own plays, a sparkling comedy called The Playwright about a once-famous writer, trying to make a come-back.