The Fair Faces of the Russian North

Russian North never fails to fascinate and amaze an explorer of Russian history, not in the least, because of its associations with Old Believers and their traditions pre-dating modern history. If you plan to visit Moscow this winter or spring,  make sure that you have the Museum of Russian Icon on your list,  and especially the breakthrough exhibition The Fair-Faced Images of the Mountainous Industrial Urals: Three Centuries of the Nevyansk Icon. 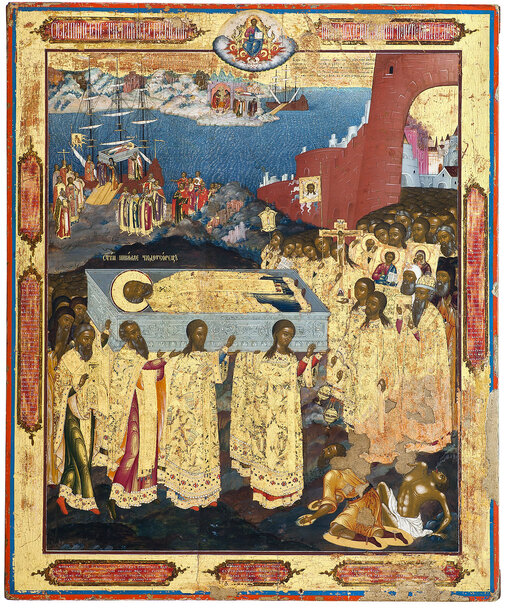 St. Nicholas the Wonderworker with his Life, 1836, the Bogatyrevs workshop, The Nevyansk Icon Museum, detail.

The Fair-Faced Images of the Mountainous Industrial Urals: Three Centuries of the Nevyansk Iconspans 300 years of the Nevyansk icon- painting school history, and features over 100 rare works of art.  All these icons originated in the industrial heartland of the Urals and were produced by the local communities of Old Believers (a large group of Russian Christian Orthodox who never accepted the religious reforms of the Patriarch Nikon of Moscow introduced between 1652 and 1666). According to the researcher and collector Evgeny Roizman, the Nevyansk School of icon painting blossomed between 1734 and 1919. The exhibition was made possible owing to the consorted efforts of two private museums and their owners: the Nevyansk Icon Museumin Yekaterinburg, founded in 1999 by Russian politician and art collector Evgeny Roizmanand the Museum of Russian Iconin Moscow established by businessman and art collector Mikhail Abramov. 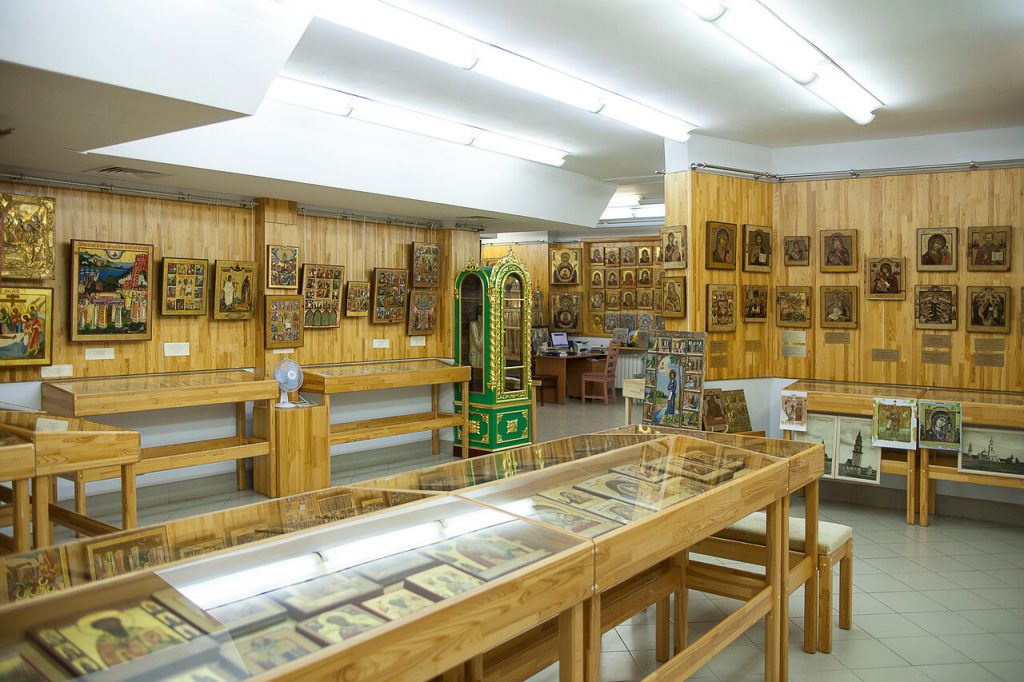 Interior of the Nevyansk Icon Museum

For the first time, Moscovites and overseas visitors alike have the opportunity to acquaint themselves with a largerly unknown phenomenon of Russian art and culture. Although it has been comprehensively studied in Russia (and even during the Soviet period), the Nevyansk icon is hardly known to the wider community of international scholars and art historians. Meanwhile, the Nevyansk school has its own distinctive features and stylistic characteristics. The most pronounced amongst them is the whiteness of faces – the so-called “fair faces” of the characters featured in the icons. Such an effect was achieved by icon-painters through a special technique of gradually applying the increasing amounts of white lead to the main ochre layers, or by white hatching. This invention quickly became the tradition, carried on by the subsequent generations of local icon-painters.

Another technique which makes these icons stand out is parquetry – special application of precious woods, such as birch or cypress onto the main panel, to create a smooth painterly surface. Most Nevyansk icons were made of lime tree with the use of the advanced polishing techniques. Obviously, the icon masters took the advantage of the iron plant amenities, thus, making icon panels of exceptional quality. Parquetry was a new technique which arrived to Nevyansk from Moscow, from the Kremlin Armoury. This technique was used only for custom-made icons. The masters excelled at it in the 18thcentury, when the iron factory in Nevyansk had its woodworking shop with excellent craftsmen.  After 1758 all known Nevyansk icons were painted against the profusely gilded background. Nevyansk masters only worked on private commissions, never intending to produce icons for mass market, hence their high quality and meticulous brushwork. Unlike in central Russia of these times, the Nevyansk icons were never painted in oils – only in tempera.

It is also quite remarkable that, according to Evgeny Roizman, Nevyansk icons had an additional function: they served as a secret sign, identifying Old Believers. On entering the house and seeing this type of icon displayed in the red corner (i.e. the icon corner, a small worship space visible when one first enters the house from the main entrance), the Old Believer visitor instantly knew that he was amongst his fellow brethren. Following old Byzantine practice, the Old Believer communities never hung their icons on the wall – only stood them against some support. The always had their distinctive ritual practices and shared a unique attitude towards icons and icon veneration, sometimes interpreting its subject matter in the ways different from the mainstream Church of the day. 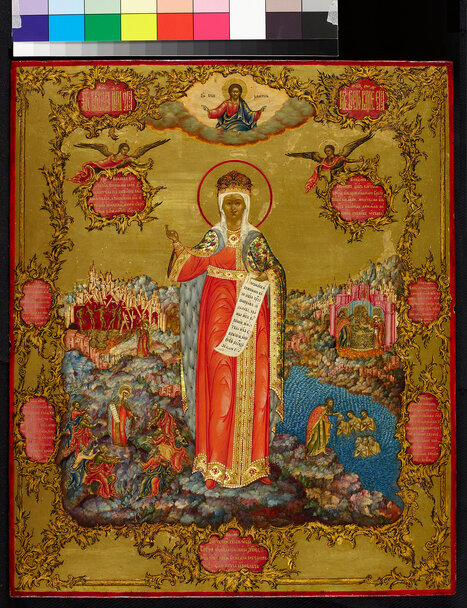 The central image of the exposition is the Vita icon of St. Nicholas, with its central scene depicting his relics being translated from the city of Myra in Lycia to Bari in Italy. The Old Believers saw this as proof of the universal veneration and love of the saint shared by the whole Christendom. Thus, St. Nicholas, the saint of the undivided Church, could bring together and reconcile various Christian and Orthodox denominations. Another Nevyansk icon of the Princess Olga, Equal to the Apostles, from the collection of the Museum of Russian Icon, also had a special meaning for Old Believers. Olga was the first Orthodox sovereign of Russia who had taken baptism in Constantinople and manifested the purity of the Orthodox faith, which was highly important for the Old Believers who saw themselves as guardians of the ancient faith, undistorted by the new reforms.

For many centuries Russian Old Believers (a large group of Russian Orthodox who never accepted the reforms introduced by the Patriarch Nikon of Moscow between 1652 and 1666) were seeking a safe haven for their communities, moving further north, wave after wave. It was mainly them who became the first colonizers of the Urals. Old Believers maintain the liturgical and ritual practices characteristic of Russia before the times of Peter the Great. Having been dubbed “schismatics” (raskolniki) and anathematized by the official Russian Orthodox Church, these communities sought to escape from the Central Russia with its harsh administration, unbearable double taxes and religious persecution. This is how they also came to be associated with the “golden age of the Russian iron” that goes back to the strategic decision of Peter the Great, at the end of the 17th century, to push forward the foundation of iron-making plants in connection with pre-industrial “works towns” in the Ural Mountains. 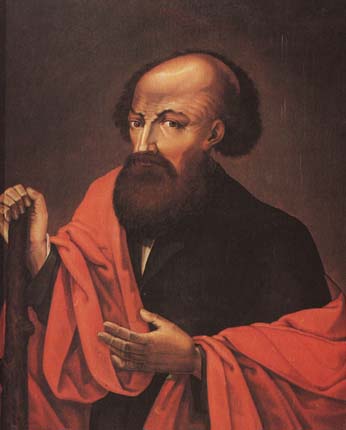 Portrait of Nikita Demidov, founder of the dynasty.

When Nikita Demidov (1656–1725), founder of the Demidov industrial dynasty, arrived Yekaterinburg on the orders of Tsar Peter the Great, he had mostly to rely on his Old Believer workers. Demidov never perceived their religious beliefs as a hindrance — on the contrary, the Old Believers were well-known for their integrity, industriousness and business acumen. Moreover, they were all literate, as they practiced the study of the Bible, not unlike their Protestant counterparts in Western Europe.

Within a few decades, the Urals became the centre of Russian iron production, with plants often equipped with larger and better tools and machinery than in Europe. Nevyansk, 90 km north of Yekaterinburg, was the first of these new plant towns. Founded by Nikita Demidov in 1699, Nevyansk, the “grandfather of the Ural plant towns”, became one of the most important factories – not only in the Urals, but also in Europe in terms of both the quantity and quality of the metal produced and rivalling English and Swedish iron. A new factory at Yekaterinburg followed suit, joined by the newly discovered iron mines in Kolyban.

All this had its beneficial effect on the Nevyansk icon painting school: the painters received larger commissions offered by wealthy, increasingly more discerning and highly sophisticated patrons, demanding for works of exceptional quality. It is believed that the Nevyansk icon is stylistically related to Suzdal icon-painting school (Mstera), Yaroslavl school, Moscow Kremlin Armoury workshops and the so-called “Stroganov school” of icon-painting. Probably, none other icon demonstrates this best as “Out of My Womb Before the Morning Star I Bore You”, interpreting a very complicated theological subject, originating from the Ps. 109: 3. These lines from Ps. 109 are profusely referred to during the festive Nativity services celebrated by the Eastern Orthodox Church and quoted in the 17th Kathisma. The icon, interpreting them, is excellent in its lyricism, beauty, finesse of execution and profound mysticism of its theology. Without doubt, it is one of the highlights of the exhibition, an undisputed masterpiece of the Nevyansk school. 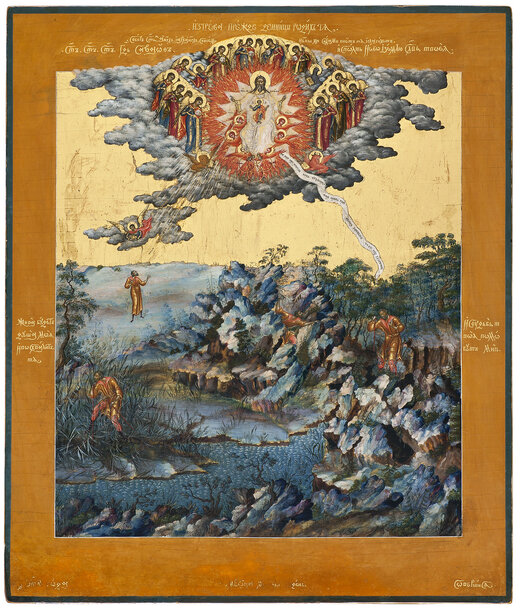 Out of My Womb Before the Morning Star I Bore You, 1832, the Bogatyrevs workshop, The Nevyansk Icon Museum.

The number of the surviving Nevyansk icons is very limited: many did not outlast the persecutions of the 19thcentury and of the Soviet times. The icons of the 18thand early 19thcentury are considered to be the best. In 20thcentury this unique icon-painting tradition falls into decline as soon as the October Revolution reached the region and all Demidovs’ plants became nationalised.  Russian art-historian Gerold Vzdornov, considers Nevyansk workshops be representatives of the last Russian original living school of icon painting that amalgamated some archaic traditions (restrained colour palette, austerity, restricted number of pigments, archaic posing of figures etc.) with advanced technologies of its day.

Fortunately, many of these icons were saved, restored and literally snatched from the oblivion by an avid collector and historian Evgeny Roizman, who has in store many thrilling and entertaining stories about their acquisition, restoration and research. If you are lucky, you may even sign up for the tour of the Nevyansk icon exhibition guided by Mr. Roizman himself, as he frequently travels from Yekaterinburg to Moscow for this purpose (please, contact the Museum of Russian Icon to arrange a tour, if you are interested).  Otherwise, you will have to console yourself with a virtual tour of the Nevyansk Icon Museum.

For more information on the show follow the link.