As part of its ‘In Focus: Sergei Loznitsa’ programme, the Institute of Contemporary Arts (ICA) hosted a screening of Loznitsa’s 2015 film The Event, with an introduction by the director. The film consists of archival footage from Leningrad during the failed coup d’état attempt of August 1991, which was led by a group of communists in Moscow. Soon after, the USSR collapsed, ending the 70-year-long rule of the Soviets. This carefully compiled documentary film transports viewers back to the confusion and optimism of August 1991. It questions what revolution means in the post-Soviet context more widely, and leaves us wondering whether its participants are victors or victims.

The reverberations of the Moscow coup were felt differently in every Soviet city. Loznitsa himself was in Kiev, having just left his job and preparing to join Moscow Film School. He received a call from his friend telling him to turn on the television. He discovered that all four state channels were broadcasting Tchaikovsky’s Swan Lake on loop. This was the case across the entire Soviet Union. News trickled in: Gorbachev had fallen gravely ill and was in Crimea, a state of emergency had been declared, and there were tanks rolling through Moscow. Of course, Gorbachev was not ill. The so-called State Emergency Committee was staging a coup to attempt to overthrow Gorbachev and undermine the president of Russia, Boris Yeltsin. In Leningrad, this news was met with thousands of pro-democracy protesters flooding the streets. 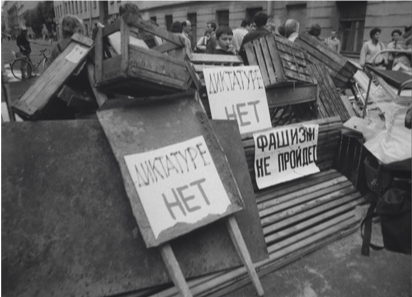 ‘Fascism Will Not Prevail’ ‘No to Dictatorship’

Among the Leningrad protesters were eight cameramen, who took to the streets to record the events as they unfurled. They captured confused citizens desperately scrambling for information leaflets, speculating whether Gorbachev was dead and listening to booming loudspeaker announcements. Nervous huddles gradually grew into thousands of excited people gathered in support of Boris Yeltsin’s democratic opposition. ‘Fascism will not prevail!’, read their placards. The coup had failed miserably and the tri-colour Russian flag was raised over the city. The day was hailed as the birth of Russian democracy.

More than a quarter of a century later, Loznitsa lifted this footage from the St. Petersburg Archive Studio. He carefully restored it and compiled it into a series of chronological episodes, which portray a bewildering mix of confusion, desperation, defiance and hope. Between episodes, a theme from the second act of Tchaikovsky’s Swan Lake plays over brief black screens. At some points in the film, the music sounds ironic. At other times, it sounds tragic or rich in pathos. By the end of the film, it seems that the protesters have proudly taken charge of the music which the plotters had so smugly broadcast on the radio and television. The film almost becomes a suspenseful opera. ‘The music sounds different at various moments in the film. It’s the Kuleshov Effect’, remarked Loznitsa, smilingly.

The viewer can sense which footage was captured earlier on by how it was filmed; the cameramen initially hid in cars and filmed through the windows, slightly shakily, afraid to step outside. Sometimes, they would suddenly hide the camera, cutting off the film. However, as their protesting subjects grew braver and bolder, so did they. They began to capture sweeping, overhead shots of the huge crowds, focus on individuals or small details, and pause to capture aspects of the city itself. Memorably, one cameraman chose to linger on a small, framed photograph of Lenin gazing across the street from a window above. Perhaps the cameraman felt nostalgia or sadness as he focused his apparatus on Lenin’s steady stare. Or perhaps he felt triumphant – we cannot know. What is certain is that Loznitsa includes this piece of footage with a satisfying sense of irony, forming his own message through the medium of documentary.

Cameramen were initially afraid to step out of their vehicles

he viewer witnesses August 1991 through the eyes of the citizens and cameramen who lived it. We can feel their fear and elation. We listen with them as Kino’s ‘Changes’ blasts powerfully through the crowds. By the end of the film, half a million fists are raised outside the Winter Palace. This is an emotional moment for viewers who have followed Russia’s political journey since 1991. Years on, we can’t help but wonder how the protesters look back and remember that moment when they stood together with their fists in the air. 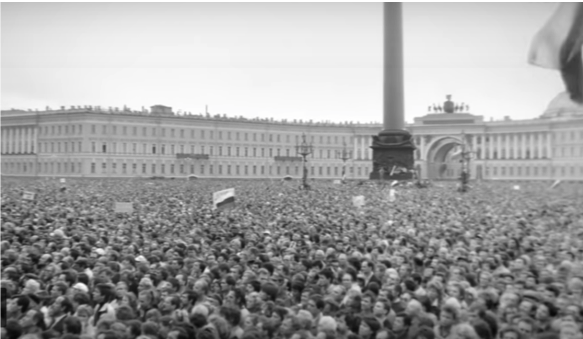 The vague title of the film reflects Loznitsa’s style: he avoids adding his own voice and labels to moments in history. It also portrays the mystery and confusion of August 1991. Even now, it is not fully understood what happened that day. Was it a revolution, or was it a spectacle masterminded by puppeteers? As modern viewers possessing the power of hindsight, we question what we are witnessing. Was August 1991 the collapse of a regime, or was it a sly passing of the baton? Loznitsa believes that it was a staged political performance aimed at changing the ruling elite. However, he prefers to allow audiences to form their own opinions and conclusions, which this title allows us to do.

Loznitsa’s archival films encourage us to understand the present by looking at the past. Bearing this in mind, there are certain pieces of footage in The Event which Loznitsa clearly selected by no coincidence. One particularly ominous moment shows the Mayor, Anatoly Sobchak, being escorted into a car with a group of aides. Among them is the eerily recognisable face of Vladimir Putin. It is impossible to know whether the cameraman had any premonitions at that moment. Either way, it is an uncomfortable moment for modern audiences. It is apparent that Loznitsa wishes us to question how Russia ended up in the hands of another puppet parliament, even after the supposed birth of Russian democracy.

Another such moment is the inclusion of a piece of footage showing a woman in Palace Square holding a placard reading, ‘My Long-Suffering People, Don’t Let Them Deceive You’. It is likely that the woman was referring to the communist stalwarts. With hindsight, this sentence can also be applied to Yeltsin and even to the current Russian government. Loznitsa likely included this piece of footage to insist that this sentence is just as important now as it was then. The Event appears to be as much about lost hope and populations being tricked as the 1991 coup and protests themselves. 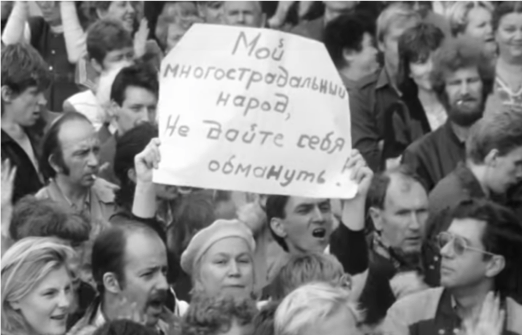 ‘My long-suffering people, don’t let them deceive you!’

The Event places us amid the excitement and hope of the momentous days of August 1991 that would change the course of history. It is also a striking reflection of present-day Russia. We are led to question and doubt the potential of revolution, and reflect on the extent to which present-day politics may be fuelled by deception. Tragically, we are left wondering whether the hope for true systematic change is futile.