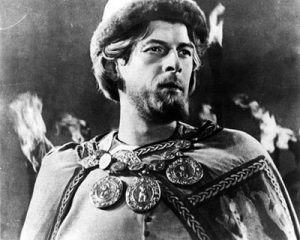 Picture it: conductor, orchestra, choir, soloist — all are performing Alexander Nevsky’s Cantata with Sergey Prokofiev himself on the stage at the Royal Festival Hall, reminiscing of the time when he was working on it.

Perhaps hoping to have the real Sergey on stage would have been too much of a dream, however the Bach Choir managed to take us very close to it. On stage, actor David Bamber had his own desk with a phone and some music sheets on it, and that was all he needed to impersonate Prokofiev while having calls with Film Director Sergey Eisenstein or his wife Lina. The acting element, mixed with the reading of poems by Alla Gelich and Helen Baranova, made the Bach Choir’s first ever performance of the Cantata not a conventional one.

Let’s start with a preliminary question: who is Alexander Nevsky? He was a historical Russian medieval hero, later canonised as saint,  who, with his strength and charm, led the Russians to win the battle against attacks from the Tatars and the Teutonic Order. The story of this heroic figure looked like a perfect plot to Sergey Eisenstein, who was thinking about making his first sound film. And who better than Prokofiev to ask to compose the music for it. The film and its patriotic message received the approval by Joseph Stalin, as it was encouraging the Russian people to unite against these western forces that were threatening Russia. However, following the pact that was formed with Hitler in 1939, Stalin ordered that the movie would not be shown again because it could have compromised the newly formed relationship. It became convenient again and therefore reintroduced in cinemas in 1941, when Hitler invaded Russia.

Eisenstein worked closely with Prokofiev during the creation of the film, planning scene and music together, with the music adapting to the film but also the film adapting to the music, if that was needed to preserve the integrity of the musical fragment. He really appreciated Prokofiev’s ability to capture the emotional effects, rhythm and structure of the scenes of the film after watching them for just two or three times. The trust and complicity between the two allowed them to express their own styles throughout the music and the film. The final product from Prokofiev ended up being so powerful and fascinating that, a few weeks after the film was premiered in 1938, the Composer expressed a desire to rework the music for Symphony Orchestra and Chorus, which culminated into the famous Cantata. The seven sections follow the chronologic structure of the movie. Even today, the Cantata remains one of the most beautiful and most powerful soundtracks ever composed. Even if you have never seen the movie, listening to its music will touch your imagination and transport you into a story which your mind can visualise and explore. Some, in fact, would also argue that Prokofiev not only composed a beautiful music for a film, but he also invented the modern film soundtrack genre with it. 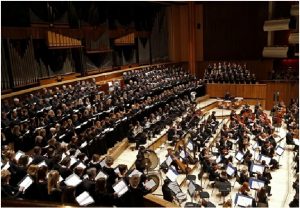 The Bach Choir perform at the Royal Festival Hall

What the Bach Choir presented worked from many different points of view. The first half of the programme was all American and with a link to film music, with Barber’s Agnus Dei and Bernstein’s Chichester Psalms and Symphonic Dances from West Side Story. The Philharmonia Orchestra and the Choir really excelled throughout the whole performance, with its peak in the second half with Prokofiev’s Cantata. The format of the Cantata worked very well: the mix of different means of communication – sound, reading, acting – went back to the original purpose of this music, which is to be used in harmony with other audio-visual elements. The aim of the Choir was to find different ways of helping the audience to discover the meaning behind the music, and they definitely succeeded in this.

David Hill, the Bach Choir’s Musical Director, conducted the musicians with his energy and charisma. A special mention goes to Contralto Hilary Summers, who delivered a powerful and moving interpretation of “In the fields of the dead”. The Choir’s brilliant singing of the last section, celebrating Alexander’s victorious return to Pskov, was a perfect ending to a fantastic concert.