IOTF is an annual online theatre festival, produced by  The Theatre Times showcasing the work of diverse global artists. Now, in its second year, over the course of a month, IOTF will present 25 different productions and films from a range of international companies, including Schaubühne, Stanislavsky Electrotheatre, Reckless Sleepers, and English Touring Theatre. Iconic productions to be screened include Enemy of the People (dir. Thomas Ostermeier), (A)pollonia (dir. Krzysztof Warlikowski), and Lenin (dir. Milo Rau).

!!!All productions are free to watch, wherever in the world you are!!!

When  launched the 2019 festival, the world felt like a very different place. 2020 has brought exceptionally difficult times with those in the creative industries hit particularly hard by the repercussions of the COVID-19 pandemic. This online festival offers a space for audiences to congregate (albeit digitally!) in looking towards better and more hopeful times, the theme of transformation and resistance – ‘in a world where you can be anything…’ – aims to create an online space that blurs geographical boundaries, rejects simplifications about borders and national identities and, most crucially, brings people  together as a community to think about what it means to be human.

The 2020 festival creates a digital place for exploring multiple definitions of theatrical space. In the main program there will be 23 productions from a wide and diverse range of international artists including Heiner Goebbels and Song of the Goat, and UK-based companies such as English Touring Theatre and Reckless Sleepers — these two presented courtesy of Digital Theatre+.

Companies returning to the IOTF following last year’s run include Nowy Teatr, Left Bank Theatre, Zhengyi Ci Xilou and the Stanislavsky Electrotheatre — the latter presenting five productions including Psychosis, a Russian take on one of Sarah Kane’s most celebrated plays and Boris Yukhananov’s spectacular Octavia. Trepanation, a new opera by Dmitri Kourliandski, one of Russia’s most acclaimed composers. This year’s festival also welcomes the Schaubühne presenting five stagings, including Katie Mitchell’s Orlando and Thomas Ostermeier’s The Marriage of Maria Braun. LA-based City Garage and Beijing’s Quirky Moth Theatre are just two of the companies presenting exciting new work from the USA and China. 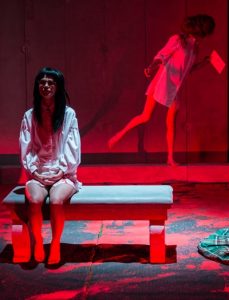 In a new ‘Beyond the Stage’ section, IOTF will be screening three films that engage with the theatrical: Michelle Memran’s The Rest I Make Up (2018) about the legendary American writer-director Maria Irene Fornes; Ventura Pons’ The Virus of Fear (2016), a screen adaptation of Josep Maria Miró’s acclaimed play, Arquimedes’ Principle, and Elisabet Cabeza and Esteve Riambau’s Masks (2009), which observed the legendary Spanish actor Josep Maria Pou preparing to play Orson Welles onstage.

These films invite us to reflect on what it means to create and adapt, and the ramifications that these processes have on how we perceive each other, in a world where we can be anything …

IOTF will be launched online from April 15th, 2020, through May 15th, 2020. Audiences will be able to access the shows via the festival page at:

IOTF: The International Online Theatre Festival is presented in collaboration with Stanislavsky Electrotheatre, Schaubühne, Stage Russia, Ninateka and DigitalTheatre+. With the support of The Royal Central School of Speech and Drama, University of London, Emerson College, and all the companies who have given permission for their work to be screened and shared.