TBILISI OR NOT TBILISI ? 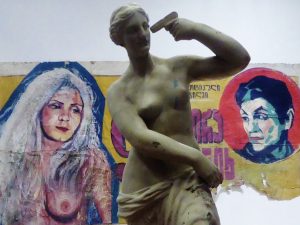 That was the question facing gallerists, collectors and our International Editor Simon Hewitt at the inaugural Tbilisi Art Fair (May 17-20)

The Tbilisi event was far grander than its Trans-Caucasus counterpart: more galleries, more international, and a VIP programme of élitist excellence.

The ExpoGeorgia fairs complex made an attractive venue, with its sculptures scattered around leafy pools, Soviet mosaics glinting in the background. The Tbilisi Art Fair, somewhat bizarrely, was consigned to distant Hall 11 – with most visitors arriving via Hall 4, home to The Hive and its selection of non-galleried artists.

The Fair opened on May 17 amidst perceived Russian imperialist controversy. Moscow’s Alex Sharov, boss of Gallery 11-12, was the man of the moment – aided and provocatively abetted, not for the first time, by that slippery Siberian Vasily Slonov. 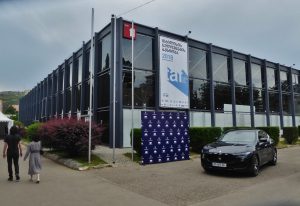 By the time I caught up with Sharov, a couple of hours after the Fair had opened its doors, he had turned around Slonov’s painting I Love Russia – and its companion piece I Love UK – to face the wall (the photograph below was taken in split-second secrecy). You might think that portraying the Motherland as a fried egg is the sort of sarcasm that would have patriotic Georgians licking their lips rather than foaming at the mouth, but we live in over-sensitive times. 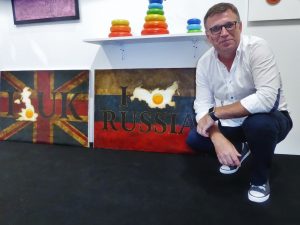 Alex was sporting trainers because his stand’s main offering was a psychedelic work-out gym by a young Russian duo known as the Simple Things Art Sect. This proved a bit conceptual for a public with scant exposure to the contemporary mainstream, and 11-12 endured one of their less lucrative fairs.

Another Vinzavod heavyweight – Vladimir Ovcharenko of Regina Gallery and Vladey auction-house fame, participating this time as Ovcharenko Project – kept a lower profile. In fact so low he was nowhere to be seen.

Two of the Russian artists in highest demand were to be found at Antwerp’s NK Gallery, where the powerful draughtsmanship of Kirill Chelushkin was engagingly complemented by the bright, lacquer-like paintings of Taisia Korotkova (see below). Roza Azora brought Ivan Yazykov’s intricate graphics, while Slavs & Tartars banners bedraped the stand of Warsaw’s David Radzisweski. 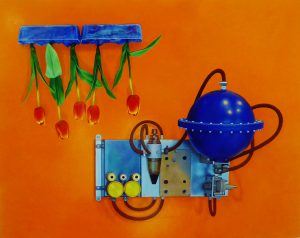 One-third of the Fair’s 30 galleries, however, were from Georgia – showing everything from Socialist Realism to abstraction via textiles and newspaper cartoons.

TBC’s Keti Kordzakhia, the grande dame of the Georgian gallery scene, was lured into the Fair at the last minute by the chance to showcase Guram Tikanadze’s vintage photographs of Georgia in the 1950s. This display dovetailed tastefully with the black-and-white contemporary photographs by Levan Kherkheulidze on show at Keti’s circular city-centre gallery. 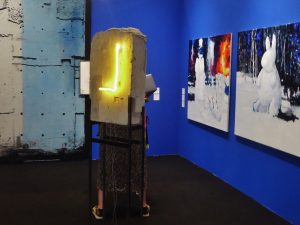 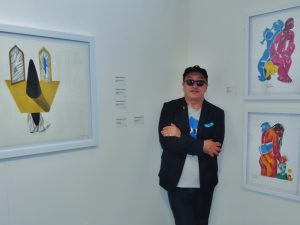 Although neighbouring Armenia was represented by KulturDialog from Erevan, promised galleries from Iran and Azerbaijan failed to show up. 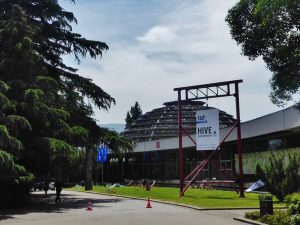 The Hive showcased 40 artists without gallery representation. Kestutis Svirnelis’ Something in the Air greeted visitors at the entrance with its hypnotic, billowing sheet of polythene. The glass-domed hot-house, opposite the entrance, was said to be hosting some sort of sound installation while, to the right, a maze of Georgian and international pictures and sculptures included a wallful of whimsical inventions by the self-taught digital artist Levan Amashukeli (see below). Although The Hive’s artworks stood comparison with most things on show in the main gallery hall in terms of quality, it was not clear if they were for sale – or, if they were, whom prospective buyers should address.

The far end of The Hive contained a lively children’s art-class area, then segued it another hall divided between a low-lit, grey-walled, apparently non-commercial section of Georgian-themed vintage photographs and an airy array of large-scale artworks led by Nata Sofromadze’s shiny-framed, grid-patterned flower pictures and a six-part horizontal abstraction by Lado Lomotashvili. 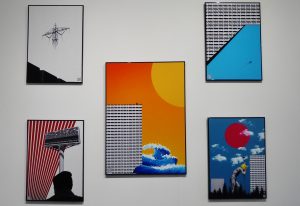 Yet another hall hosted art talks and Auto Genesis, a wall-filling techno-video by Tehran-based Nikzad Arabshahi. Elsewhere there were no fewer than 15 ‘off’ events, notably at the Tbilisi Kunsthalle and the Ghvinis winery, not forgetting visits to artists’ studios. Gamrekeli Gallery caught the back of the throat with a disconcertingly dry vernissage for their exhibition of Avant-Garde set designs by Irakli Gamrekeli.

After daytimes devoted to art, Fair visitors were subjected to a punishing eventide social schedule. The opening cocktail party by ExpoGeorgia’s fairy-lit lake offered Grand Meaulnes-like enchantment. The following night guests were whisked up the city funicular to stellar views, Stalinist architecture, succulent cuisine and soul-searching Georgian a capella singing. The third night featured a country-house shindig in Shindisi, 10 miles outside the city, with cheeky-eyed co-hostess Medea Medo Mirianashvili twirling her way around the gardens like a cross between a Whirling Dervish and Scheherazade.

Another momentous occasion was the launch of Nic Iljine’s ground-breaking 400-page Memories of Tiflis, a magnificently illustrated chronicle of the Georgian capital in Tsarist times published by Fachhochschulverlag of Frankfurt (€46). This meaty tome contains chapters on the city’s history, architecture, art, music, literature, folklore and photography, plus over 400 illustrations in the form of maps, old photographs, postcards, prints, posters, stage designs and paintings – including unfamiliar views of the city by Vera Rocklin (from a private collection) and Ayvazovsky (now lost, having been stolen from a local museum). The launch, lubricated by wines from the prestigious Vazisubani Estate and peppered with speeches by the book’s various authors, was ringmastered by Editor Iljine at his most Churchillian.

The roster of VIPs who flew in (not B.O.A.C.) with Georgia on their minds included the great London-based collector/philanthropist Igor Tsukanov; Vasili Tsereteli, boss of the Moscow Museum of Modern Art; Marc Franco, former Head of the European Commission in Russia; Elena Siyanko, Director of the Clark Art Institute in New York; Rita Janssens, Advisor to the BOZAR Culture Centre in Brussels; and Sandy Angus, who has organized art fairs from Hong Kong to San Francisco via Istanbul and his native India. 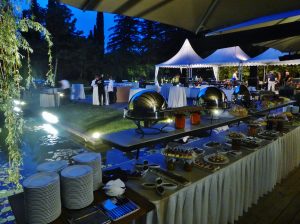 SO: TBILISI OR NOT?

Ringed by mountains, pierced by the gorge-like Kura River, its old town reeking of Oriental mystique… Tbilisi is one of the world’s most spectacular capital cities. Fair Founder Kaha Gvelesiani and Art Director Eric Schlosser exploited its exotic appeal to woo artworld VIPs from both sides of the Atlantic. A bewilderingly busy programme of artistic events, allied to sumptuous and imaginative hospitality, meant no one can have gone home disappointed.

The Fair attracted some important galleries from Russia and Eastern Europe – reflecting Schlosser’s previous involvement with fairs in Moscow and Vilnius – but was chiefly of note as a showcase for Georgia’s emerging and dynamic domestic scene.

The ExpoGeorgia venue, a 20-minute taxi-drive from the city centre (or an unsignposted 10-minute walk from the nearest Metro station), must count as one of the world’s most scenic exhibition sites. Stands were spacious and professionally lit, their content attractively varied – with a wide range of styles and media. But, even if they were tucked away at one end of the Fair (opposite its exorbitantly expensive café), the presence of two stalls selling cheap posters and arty souvenirs lowered the tone. Sales at these stalls were rather more rampant than at most stands, to the frustration of some exhibitors.

Other shortfalls included the banal Fair logo, lack of a printed catalogue, a cursory website and woeful media communication. Astonishingly, there was no post-Fair press-release detailing attendance and sales – or any indication as to whether the Fair will be staged again in 2019.

Let’s hope so. Gvelesiani and Schlosser defied the odds to put on an art fair in a country short of contemporary art collectors and throttled by dire transport links with the West: most flights to/from European cities involve a 4 or 5am departure or arrival (with hardly any of them direct). The Fair might benefit from a southwards swivel, targeting artists, galleries and collectors from Iran, Turkey and the Gulf – whose wealthy denizens account for the bulk of Georgia’s recent upsurge of foreign visitors and investors.