A tightrope walker carries artworks across a mountain canyon. This act dramatises the precarious survival of cultural heritage. In the work Tightrope 2015, Taus Makhacheva collaborated with fifth-generation tightrope walker Rasul Abakarov. He walks back and forth across a tightrope between two peaks. The mountains are in Dagestan, a republic of Russia in the North Caucasus region. Though born in Moscow, Makhacheva traces her cultural roots to this area. Abakarov carries with him copies of sixty-one Dagestani artworks from the nineteenth to the twenty-first century. Makhacheva selected these from the Dagestan Museum of Fine Arts named after P. S. Gamzatova. 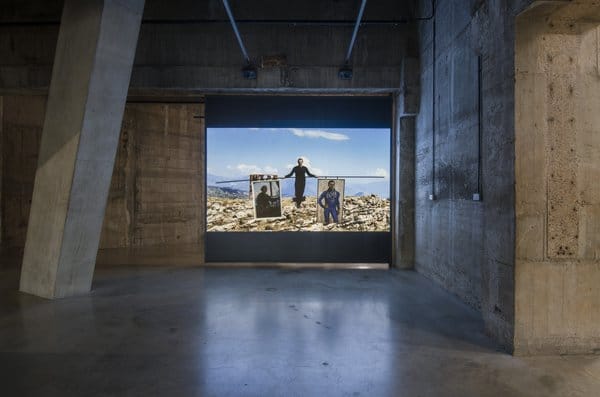 Tightrope offers a visual metaphor for the uncertain survival of cultural heritage. It likewise reflects on museums’ responsibility to protect objects of cultural value. At the beginning of Tightrope, the artworks are arranged in a line on a rack on one hill. Abakarov carries them carefully across the canyon. He then places and rearranges them in a structure reminiscent of museum storage. This relates to how museums dictate what is valuable by shaping historical and art historical narratives.

Tightrope has been exhibited widely across the world. It was shown at the high-profile art exhibition, the Venice Biennale, in 2017. Makhacheva is conscious of the contrast between how internationally visible her own work is compared to the Dagestani art included in Tightrope.

Focusing on these works, Makhacheva highlights how western art institutions might exclude certain art histories. This speaks to the value judgements and hierarchies that underlie the work of museums. Investigating this is part of the artist’s broader research into memory and preservation.