On 1st December Sworders will be holding a sale entitled ICONASTAS: Fine Russian Art & Antiques from the Renowned London Gallery.

The Piccadilly Arcade gallery was established by Chris Martin-Zakheim and John Gaze in 1974, and enjoyed a long and fruitful existence, frequented and loved by many, which included anyone from tourists to notable figures from the art world, until it closed its doors in 2018, having cemented a reputation as one of the industry’s leading specialists. The sale, which is the first of several auctions of residual Iconastas stock comprises 107 lots, which include a selection of icons from the personal collection of the late Chris Martin-Zakheim, whose premature passing after a brain-tumour diagnosis prompted the gallery’s closure.

Martin-Zakheim was a familiar face in the industry for many years, having started his career undertaking house clearances and selling relatively modest wares from a ‘junk shop’ in South-West London, before focusing his sights on Russian art and antiques, which at the time of the fall of the Soviet Union, was a particularly profitable corner of the market. As Huon Mallalieu, in the obituary that was published in The Times after his death explains,

“During the 1960s, the Patrice Lumumba University was founded in Moscow to attract students from developing nations in Africa and Asia, and thereby build a generation of third-world Soviet sympathisers. On leaving the USSR, these students were not allowed to take cash with them, but art and other keepsakes were unrestricted. Martin’s friends wondered why he made so many unexplained trips to Heathrow, but there, tipped off by another contact, he was welcoming the graduates with bundles of currency in exchange for icons they had bought as “souvenirs”.

This anecdote typifies the sorts of lines of trade with the Soviets, as well as those close to them, which earned Chris Martin-Zakheim a ban from the Union for ‘encouraging capitalism’. Nevertheless, he worked hard to manifest himself, as well as the gallery, as one of the finest dealers of Russian icons, Imperial and Soviet works of art, and antiquities, all of which feature in the December auction, which is being held as part of Russian Art Week: Autumn 2021. 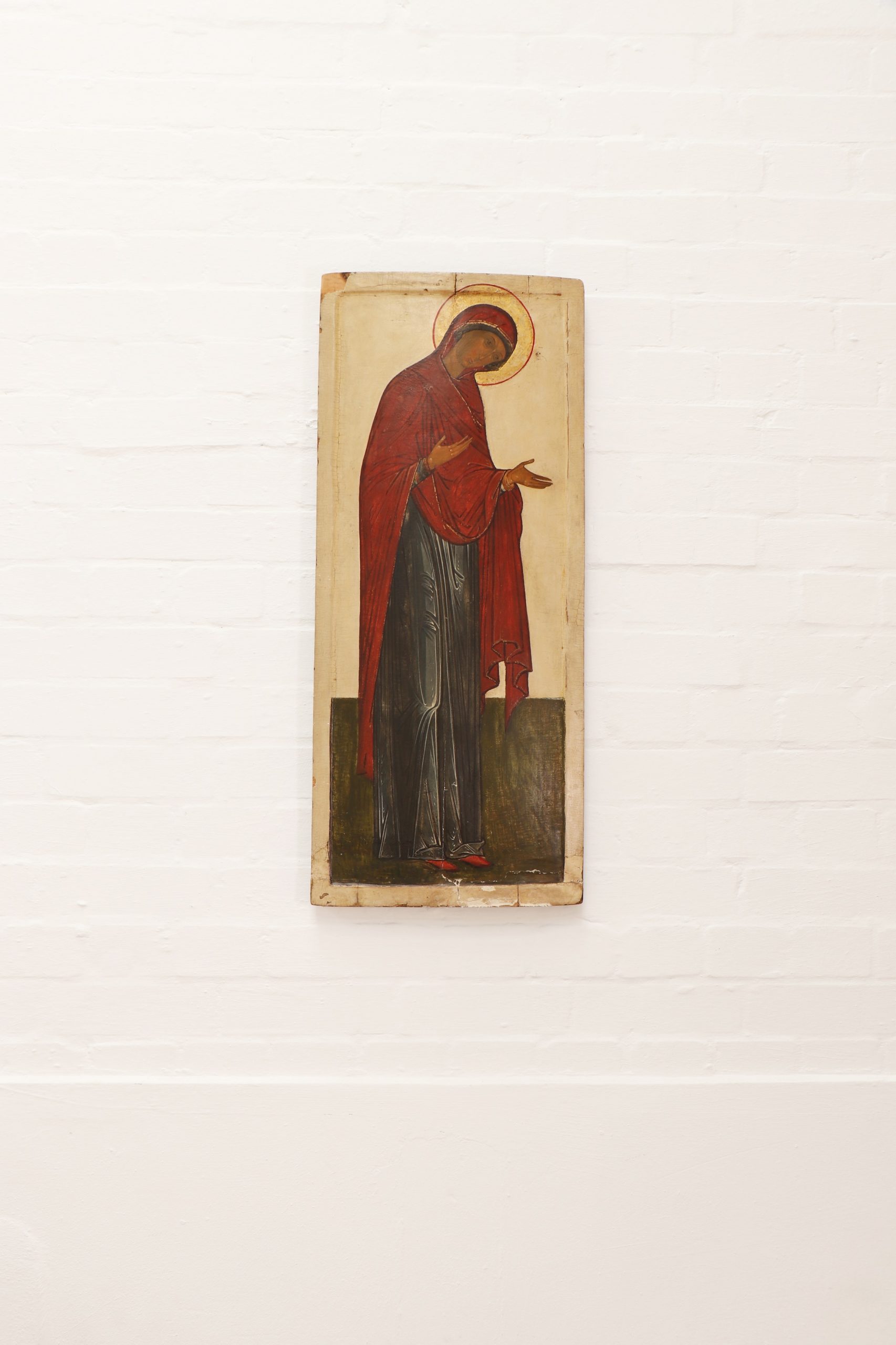 Lot 50. A large icon of the Mother of God, c.1900, but in the earlier Novrogod School style, Russia, from a deisis, tempera on wood, with Tretyakov gallery label and painted inventory numbers verso, 84 x 36cm

Particular highlights of Sworders’ sale are two icons, namely The Dormition of the Mother of God, and the larger Mother of God, which were both formerly in the collection of George Hann (1890-1979), who was a pioneer of American aviation, and who assembled one of the world’s finest private collections, which was previously sold in a landmark auction at Christie’s in 1980 after his death. He acquired many pieces directly from the Russian State in the 1930s, when the Soviet government were selling a great number of artworks from the nation’s important collections.

Following the Great October Socialist Revolution under the Soviet Union, or the October Revolution for short, the Bolsheviks embarked on a zealous and far-reaching policy of confiscation of jewellery, works of art, furniture, paintings, and crucially in this case, icons from the deposed imperial court, the nobility, the bourgeoise, the church and from various state museums and institutions. In the 1920s, Vladimir Lenin established the Central Office for the Purchase and Realisation of Antique Objects, or Antikvariat, a department within the Ministry of Trade, which was to facilitate the sale and export of such pieces around the world. In the eyes of the Soviet regime, the seizure and subsequent sale of vast numbers of artworks was to the benefit of its people, its Socialist ideals and to proletarian cultural enlightenment. Of course, financially, the sale of its treasures, many of which now grace important public and private collections across the globe, were helpful in funding state industrialisation.

The provenance of the icon of The Dormition of the Mother of God, lot 6, is particularly distinguished having once belonged to the famous Russian collector Alexei Vikulevitch Morozov, who bequeathed it to the Tretyakov Gallery. It can be traced to a sale by the Antikvariat directly to George Hann in 1936. Whilst in his ownership, it was included in six exhibitions across the United States from 1944-1945, including the Syracuse Museum of Fine Arts, The John Herron Art Museum, Indianapolis and the Allen Memorial Art Museum, Oberlin.

Similarly, the icon of The Mother of God, lot 50, featured in exhibitions at the Carnegie Institute and the Metropolitan Museum of Art in 1944. Both pieces, which are extremely finely painted, bear labels and inventory numbers for the State Tretyakov Gallery to the reverse.

Those who knew Chris Martin-Zakheim attest to his eclectic line of taste, on which basis he bought and sold a huge variety of art and antiques, irrespective of age or discipline, but all carefully chosen for their alluring academic or aesthetic qualities. The sorts of pieces of Soviet art which were offered for sale by Iconastas, often found awash with bright colours and abstract and stylised motifs, present a stark contrast to the very traditional nature of the icons and antiquities, of which the decoration, particularly the former, adheres to the rigid conventions of Byzantine art. Although disparate in ideology, when viewed alongside one another, present a fascinating glimpse into different epochs of Russian decorative arts, and the presentation of venerated and revered figures. Such was the view of Martin-Zakheim, who professed that some pieces of art produced during the Soviet era serve as ‘icons of their time.’

Just as one might expect to see the image of Christ or St Nicholas when considering Russian art prior to the turn of the century, pieces produced from the early-mid 20th century often depicted the key figures of the communist regime. A textile, lot 59, produced in Ivanovo, a town at the heart of the Russian textile manufacturing industry, in 1924, depicts Vladimir Lenin, Friedrich Engels, Mikhail Kalinin and Joseph Stalin, whose image replaces that of Leon Trotsky, which was presumably cut out after his expulsion from the Soviet Union in 1929. These key figures are shown amidst a swirl of vibrant motifs commonly associated with Soviet communism, particularly those of industry, agriculture and innovation. The piece, although sober and conservative in its messaging, espouses a sense of modernism in its composition, no doubt influenced by the highly popular Avant Garde movement of the time. Several other lots in the Iconastas auction are similarly representative of Chris Martin-Zakheim’s appreciation of the often bold and striking design of Soviet art, for which the market is now very strong. The presence of items from both fields of Russian art in the catalogue makes for an eye-catching juxtaposition of tradition and modernity. 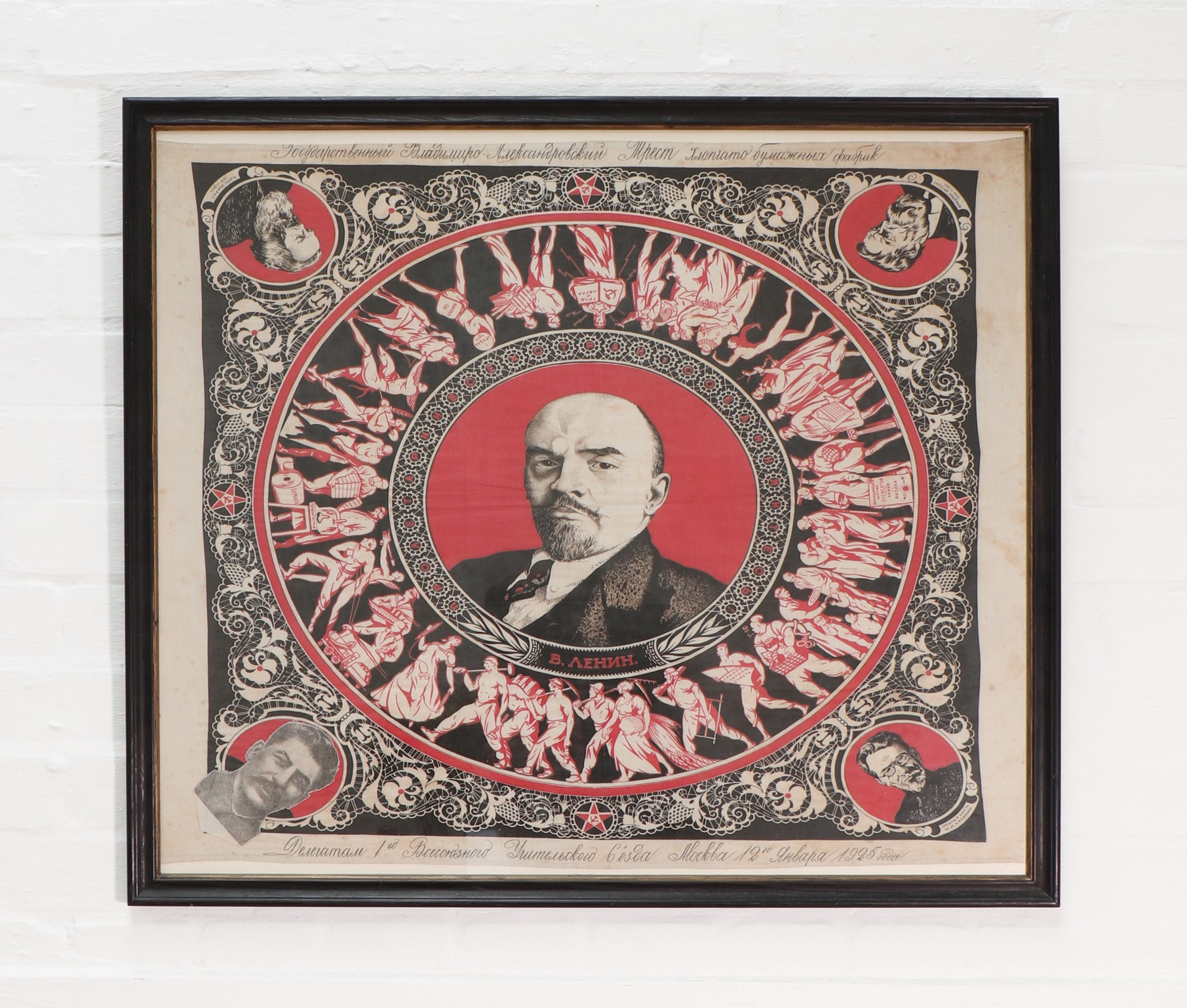 In this vein, many of the lots in the sale have been photographed alongside a selection of colourful textiles inspired by Russian, Central Asian and Eastern designs, which have been provided by Nathalie Farman-Farma of the design studio Décors Barbares. As well as lending vibrant accents to the catalogue, the colours and designs echo those in the pieces themselves, not only illustrating the continuation of such decorative techniques in the modern day, but also showing that works of such distinguished heritage can be blended seamlessly into a contemporary decorative setting.

All 107 lots in the sale will be exhibited at Sworders’ London gallery, located just off Leicester Square in Cecil Court, from 25th to 30th November, prior to the live auction at 2pm on 1st December at their Stansted Salerooms.