Story of the Future: Tretyakov Gallery’s take on the Avant-garde and Kinetic Art in Russia

The exhibition Future Lab. Kinetic Art in Russia that has just opened at the Tretyakov Gallery is one of the museum’s major 2021 exhibitions. Curated by Yulia Aksenova, Future Lab is unique in many ways. The iconic works of the Russian Avant-garde: Rodchenko, Stepanova, Popova, Tatlin, Malevich and Matyushin are in dialogue with rare, recently discovered visual experiments from the second half of the 20th century. This show serves as a unifying platform for different pasts, whilst also moving into the new millennium. The show investigates the idea of the kinetic — a term coined in 1960s — as a symbol of post-Stalinist innovation and the inevitable rediscovery of the radical experiments of forgotten revolutionary art. 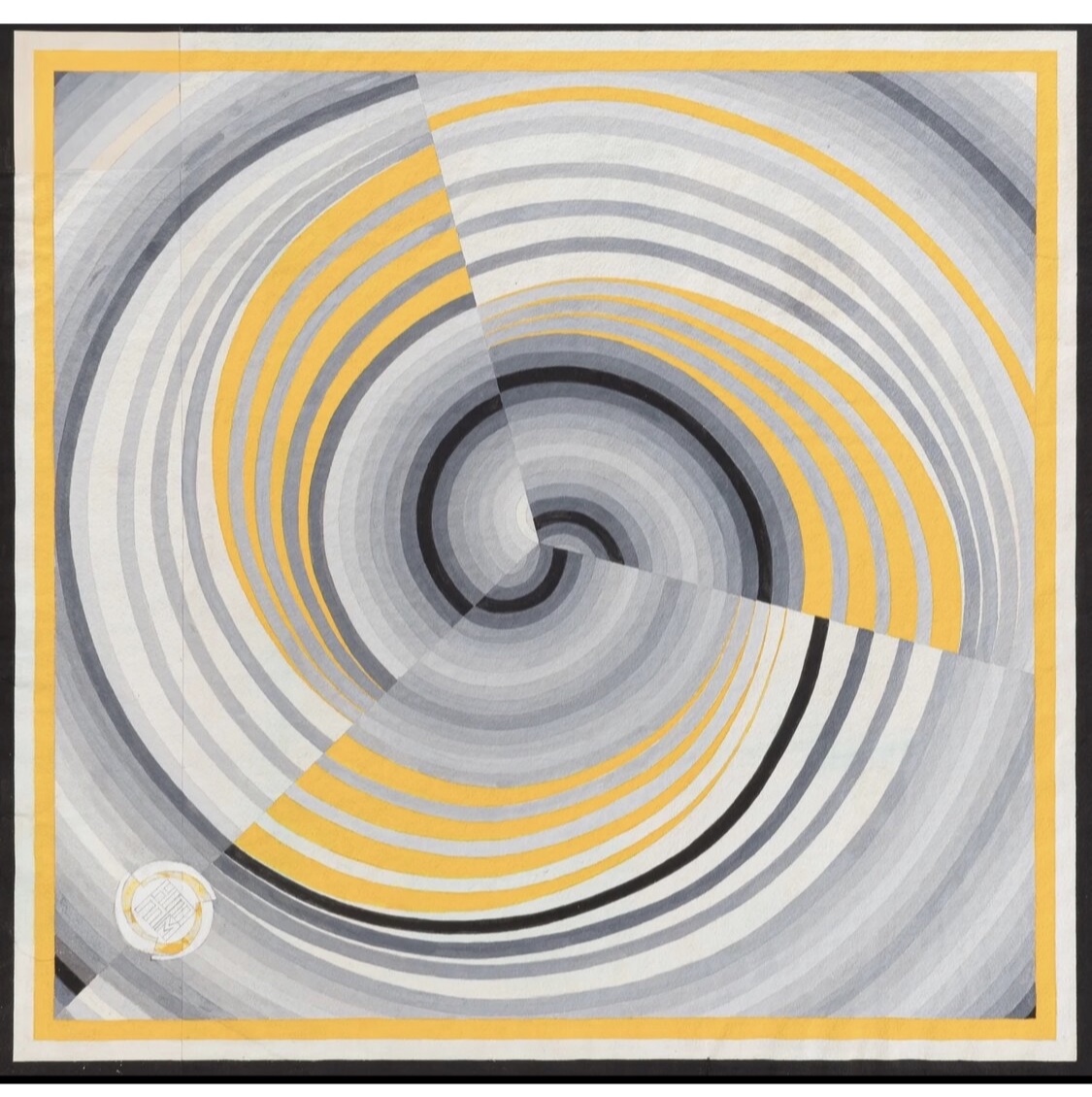 Kinetic Art in Russia is a riddle. It is seemingly beyond politics; it expands our vision and perception, it plays with optic parameters and the laws of nature. Kinetic art gives us a taste of the meta, the unlimited. Nonetheless, it contains an inherent political agenda. The term Kinetic marks the arrival of the 1960s and can also be seen as the result of the USSR’s new openness to the world and the start of the new cosmic era. With the appearance of the atomic weapons of the Cold War — a paradoxical guarantee of global peace — the world once again became a common playground. Once again humanity was encouraged to delve inside the psyche and move far beyond normal human capacities. Just as in politics in post-Stalinist USSR, where there was a push back to the universal appeal of the 1920s, the art scene at the time re-discovered the forgotten and forbidden avant-garde mode of thinking, rejecting overbearing Socialist Realism. Younger practitioners started to again experiment with the universal Unknown rather than describing history and illustrating its outdated ideologies.

It is no wonder, then, that the exhibition starts with an impressive installation The Beginning (2014) by Alexander Vogin — an enlarged version of the artist’s earlier work, created as part of the “Movement” art-group in 1965. The object reminds one of a sputnik satellite. An intricate metal construction around the object serves as a spiral train track through the dark infinite universe, and we get the sense of being on a voyage into the cosmos. As the curator Yulia Aksenova points out, “these works were created based on consultation with psychologists and scientists of the time, in order to create new experiences of oneself, a new sensuality.” 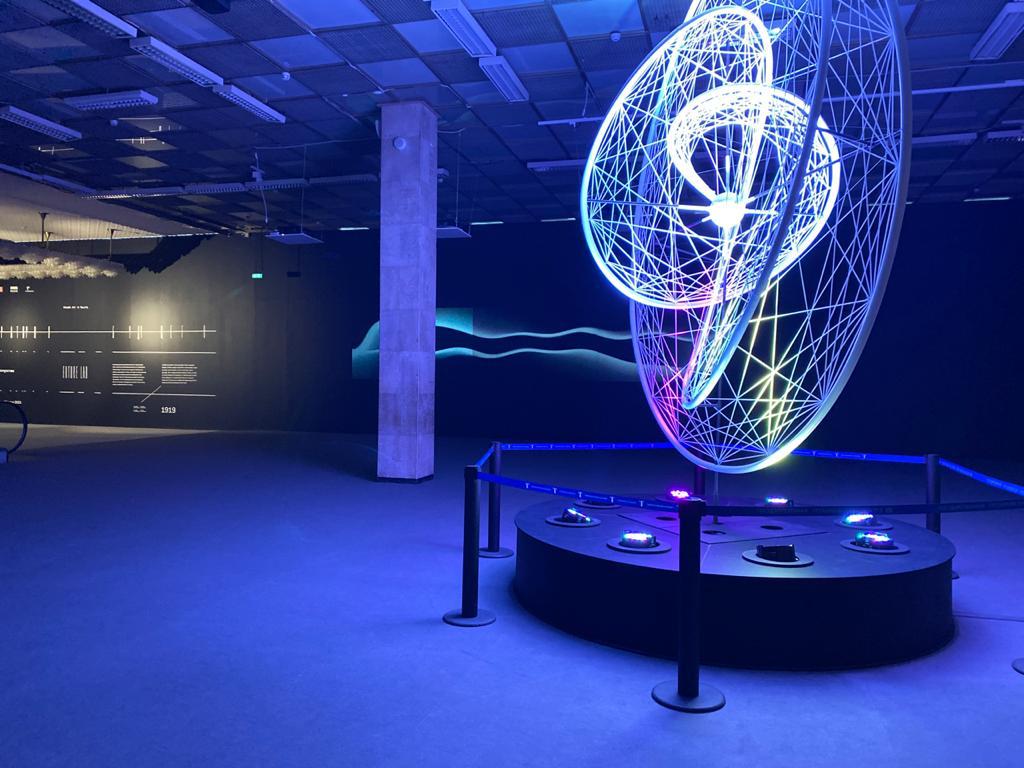 Occupying a large physical space at the Tretyakov Gallery, this exhibition is a meditative experience in its own right. It is like an aquarium, in which instead of sea life we come across art objects that capture our gaze, propelling it along its own labyrinths. It is also a laboratory — a training space and a testing ground for our sense organs and thought systems. We come across optical effects created by Koleichuk’s metallic columns with engravings, forcing us to believe that we see a 3D light structure — an illusion hanging up in the air. We see Infante’s wood and thread constructions under the ceiling that are moved solely by the power of gravity, and yet all in different directions simultaneously. Objects never move this way under normal conditions. With monotone music, diagrams, color-grading tablets and geometric patterns that change and expand our optics – the four sections of the exhibition act as a true scientific laboratory. 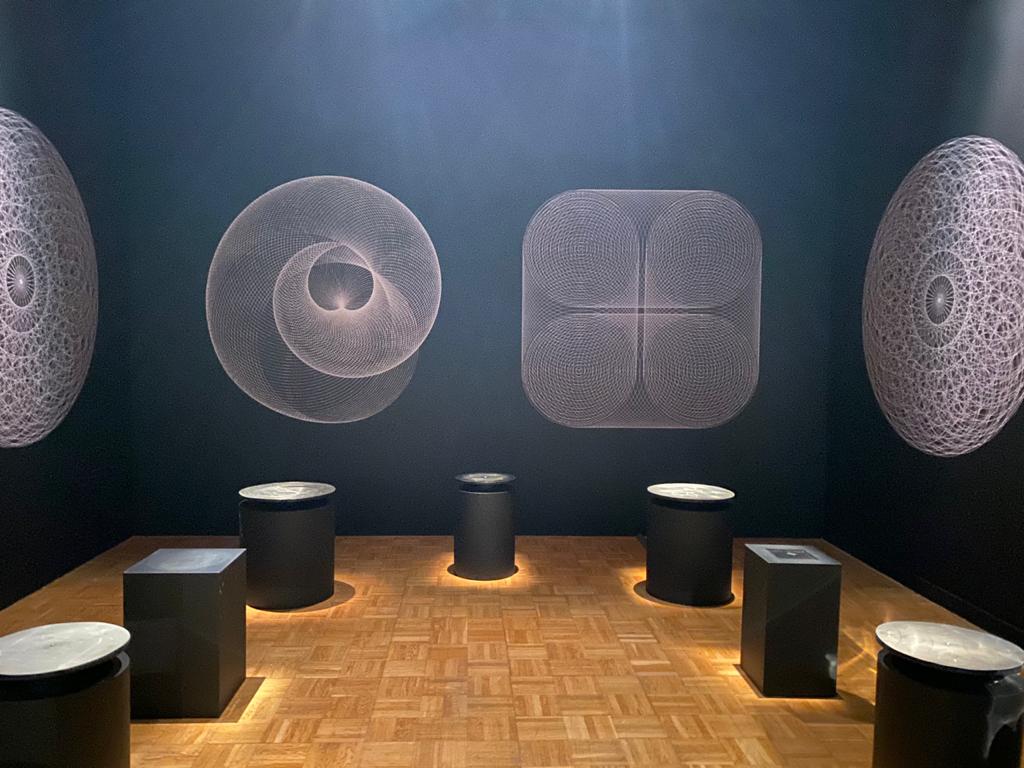 In the first zone – the laboratory of vision — we experience objects that broaden and alter our optical capacities. In the second zone we come to works that interact with our bodily senses. Then, come objects that work with our sense of measurement, proportion and linearity, only to be brought to the fourth zone, with its projects that aspire to change the public environment — the world around us. Yulia Aksenova states: “We were amazed by this very idea that something starts from scratch on a piece of paper, a visual fixation of some movement in pure ink, and then becomes an interesting art-object to be shown in a gallery and after can turn into a functioning architectural building or a whole public space”.

One of Yulia Aksenova’s interesting discoveries is the radical optical experiments of the artist and mathematician Tatiana Andreeva. Her 1974 installation for the “House of Tourists” on Leninsky Prospekt in Moscow is a true icon of Socialist Modernism. The geometric optical patterns were designed to cover the walls, ceilings and linoleum. Moreover, a visitor to these rooms was offered a special vinyl “rain-coat” featuring the same pattern, so that the human figure would disappear in the environment. This was a unique case of total design, an experimental Gesamtkunstwerk, that was officially stopped at the final stage of its realization, and labelled as being “anti-Soviet.” Sealed and forgotten till recently, these designs were in storage at a dacha. It seems that the second generation of the Avant-garde shared the same political fate as the first one. 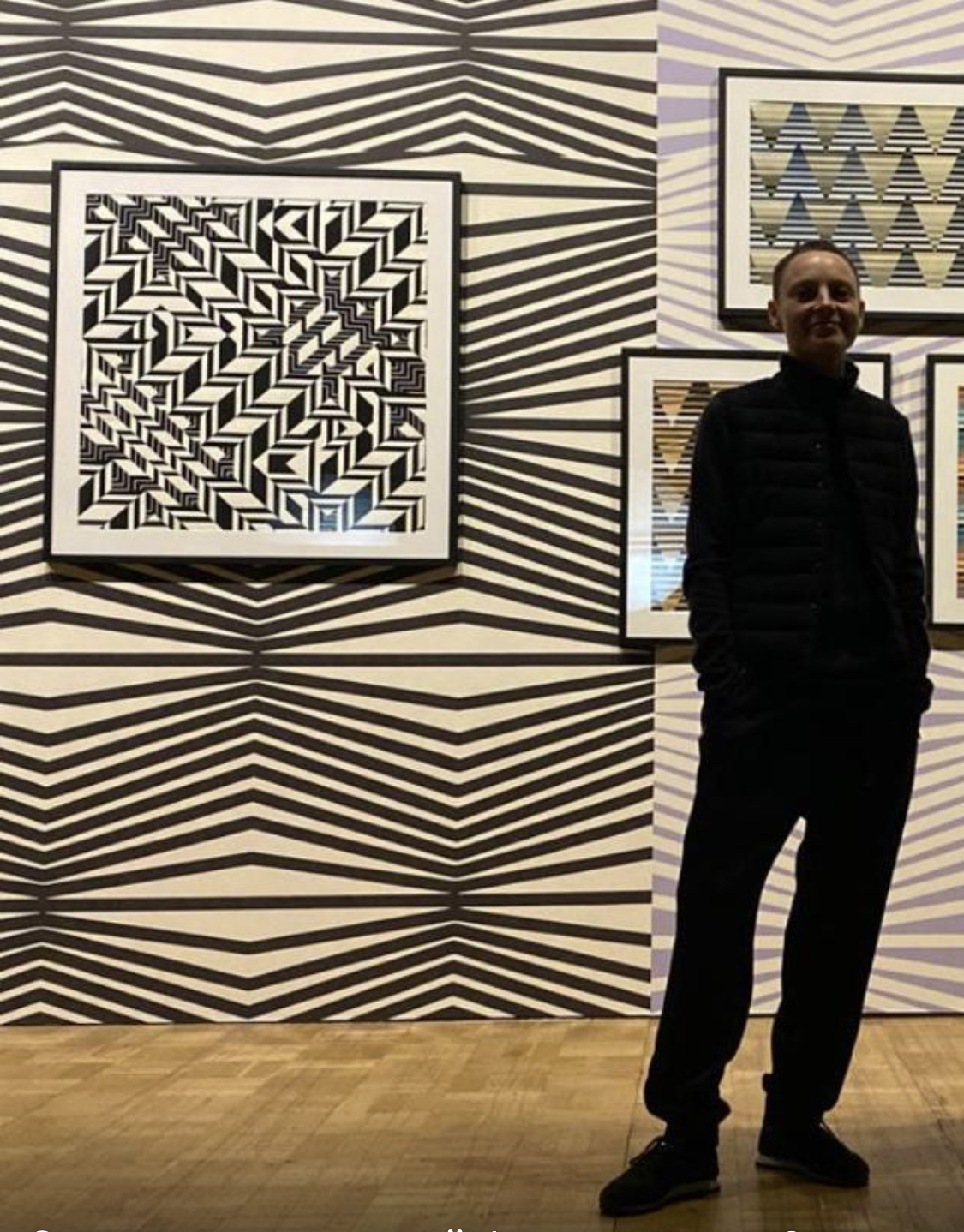 Tatiana Andreeva. Total design room for the Central Tourist House in Moscow, 1974, mixed media on paper, digital copy. Courtesy of Tatiana Andreeva. Yulia Aksenova, the curator, is next to the artworks.

Perhaps it is only just that the curatorial group chose this non-linear narrative to tell the story of Kinetic Art. In presenting different media, the show brings together the color-grading works of Matyushin, the formal architectural drawings of El Lisitzky with photography by Francisco Infante alongside them. The multimedia objects of Platon Infante are also displayed, as well as Vyacheslav Koleichuk’s moving sculptures, optical constructions by Stuchebryukov, Anna Andreeva’s textile designs and Tatiana Andreeva’s mathematical formulas. The show is not a historic procession through dates and names; it is a collective laboratory of the future. It is a pure, utopian, distilled territory, opened up to the perception of the masses.

I am reminded of Stanley Kubrik’s 2001: A Space Odyssey, a futuristic image-flow ending up with a vision of a cosmic child that has none of the anger, aggression or power-lust that seem so contagious within the earth’s normal conditions. This child of the future sees through time and space. “This exhibition changed my view of the classical Avant–garde of the 1920s,” says Yulia Aksenova.  We have always seen the Russian Avant-garde in the light of its left-wing politics and its tragic history. Yet, the Kinetic Art of the 1960s and 70s offers a radically different perspective. For the first time, the concept of the “New Man” is separate from an ideological agenda. It tells a story of perception and sensuality. It urges us to see beyond, to measure and experience the endless — just as in antiquity. It is the story of the future.” 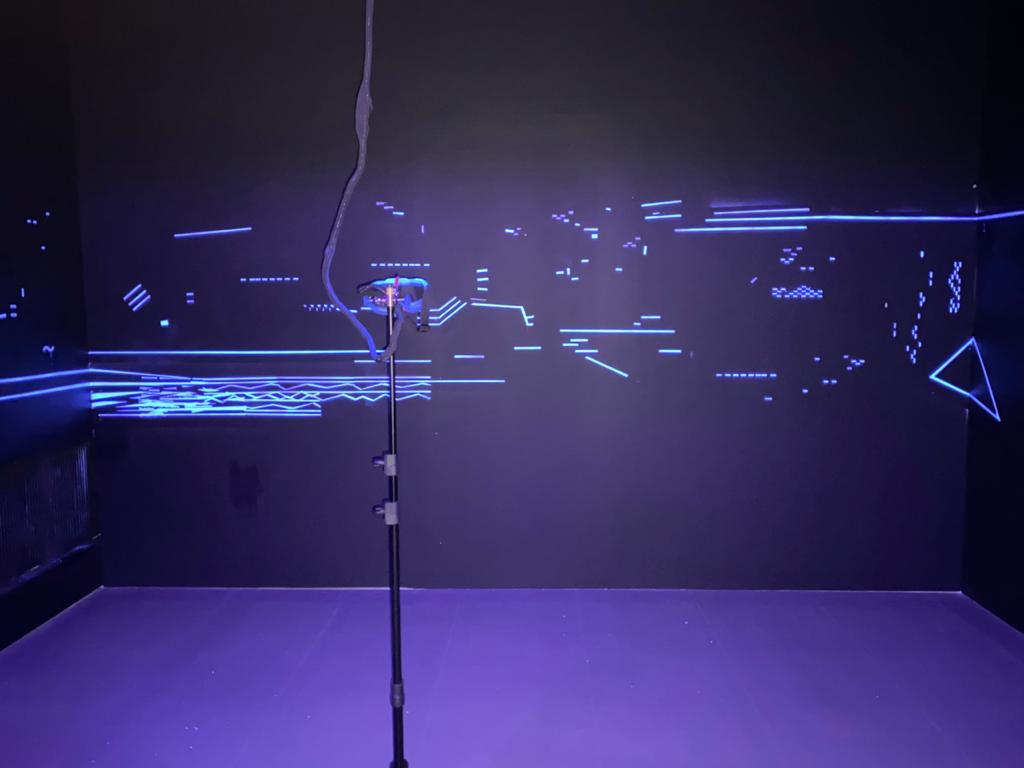 There is one more interesting turn to this story. The 1960s were marked by the discovery of new oil fields in Western Siberia. This oil boom offered the ruling government a feeling of stability, making the former need to reinvent the country economically and morally redundant. And thus the future left it. By 1991 the USSR had ceased to exist. Perestroika, the last attempt at new liberation, put Russia — once again a single country — back on the planetary cultural map.

Today, in the context of political absurdity and massive protests in Moscow and beyond, we can see a great division between the desire for power and the desire for innovation. Liberation is like “a white flash” that dissolves the “oil-stains” of power-struggle — an impulse towards the infinite. At the end of his career Stanley Kubrick — a true child of liberational politics of the 60s in the West — released his famous film Eyes Wide Shut. The eyes of the cosmic child are now the beautiful eyes of Nicole Kidman, whose character has a pornographic dream of infinite love with infinite numbers of people, her retelling of which sends her husband off on his own odyssey. By the end of it, the only thing the protagonists proclaim is that: “….we should be grateful to stay where we are.” Why? Because we can be crushed by what we really want. We can be crushed by the future. 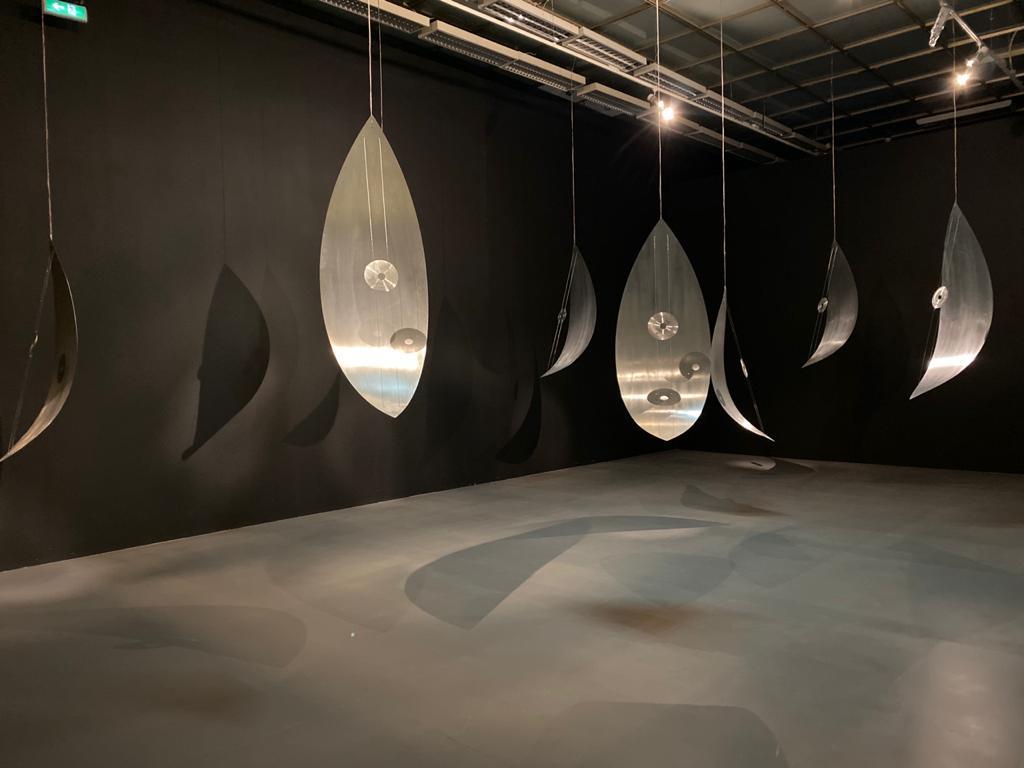 Whilst walking through Moscow’s Future Lab exhibition and feeling this nostalgia for the new liberation of dream and imagination, I somehow relax. I begin to listen again, to see again, to stretch myself again through my own frame into the outside. Perhaps the future is not lost for us. Not yet. Perhaps, we are too not yet lost for the future. This exhibition at Tretyakov Gallery opens the new doors to re-visit the unorthodox paths of 20th century Russian art.….” Perhaps it is once again time to start training ourselves not to live within a conditional, limited space but rather to belong to the immersive space of the infinite. Even if the spectre of the next potential failure haunts us, as Samuel Becket said after the havoc of the Second World War, we should encourage ourselves to: “fail again… fail better.”