The Danish auction house Bruun Rasmussen can present art and antiques that tell us stories about the close connections between Russian and Danish culture. The auction at 3 pm on 2 December takes a long and interesting journey through history: from miniature portraits of the Russian Imperial family, through modern art made during the post-war period to unique antiques from Fabergé.

The final Russian auction at Bruun Rasmussen this year embraces a broad spectrum of Russian cultural history, where Russia and Denmark have crossed paths. The auction features miniature portraits of the Russian Imperial family, modern works from the post-war period and decorative art from Fabergé’s iconic workmasters.

“This year, we’re once again focusing on the special stories that the auction’s objets d’art represent. They tell us both something about Russia’s own history and the history that Russia and Denmark share through the close royal and imperial relations dating back to the Danish-born Tsaritsa Maria Feodorovna. So, not only is this an opportunity to find beautiful works of art, but also a chance to acquire small fragments of Imperial Russia,” says Martin Hans Borg, Chief Specialist in Russian Art at Bruun Rasmussen.

The Russian Imperial family is well represented at the auction. Danish-born miniature painter Johannes Zehngraf attracted many of Europe’s royal and imperial families as clients and became the head miniature portrait painter for Fabergé in St. Petersburg. His portraits are known for their often-careful choice of colours and photographic realism. The miniature portrait of Tsarevich Alexei Nikolaevich of Russia, estimated at GBP 3,450-4,600 (DKK 30,000–40,000), is a perfect example of this. He was the only son of Tsar Nicholas II and Tsaritsa Alexandra Feodorovna of Russia and was executed at a young age together with his family during the Russian revolution. 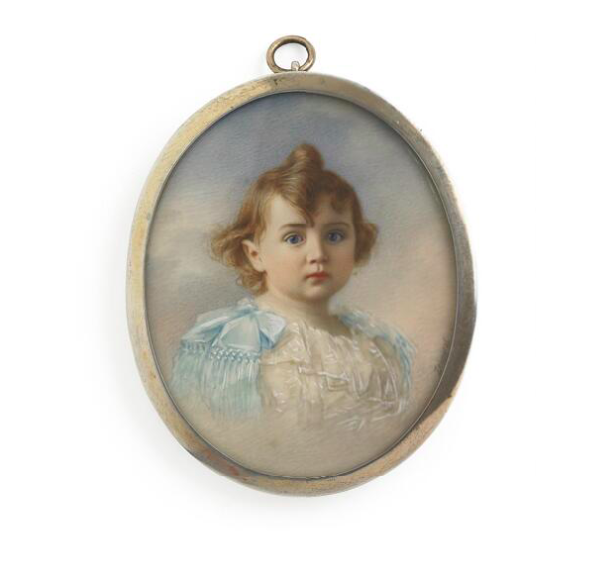 There is a family thread that runs through the works up for auction, which includes the Tsarevich’s aunt – the Grand Duchess Olga Alexandrovna of Russia. She was the youngest child of Tsar Alexander III of Russia and Tsaritsa Maria Feodorovna, the daughter of King Christian IX of Denmark. After the Russian revolution, Grand Duchess Olga Alexandrovna moved to Denmark and later to Canada, where she lived until her death. Despite the Grand Duchess’ imperial background, she preferred a simple life and dedicated a lot of her time to painting, including the work “Vinterdag i Rusland med folkeliv ved en kirke” (Winter street life in Russia at a five-domed church in the evening sun), which is estimated at GBP 3,450-4,600 (DKK 30,000–40,000). 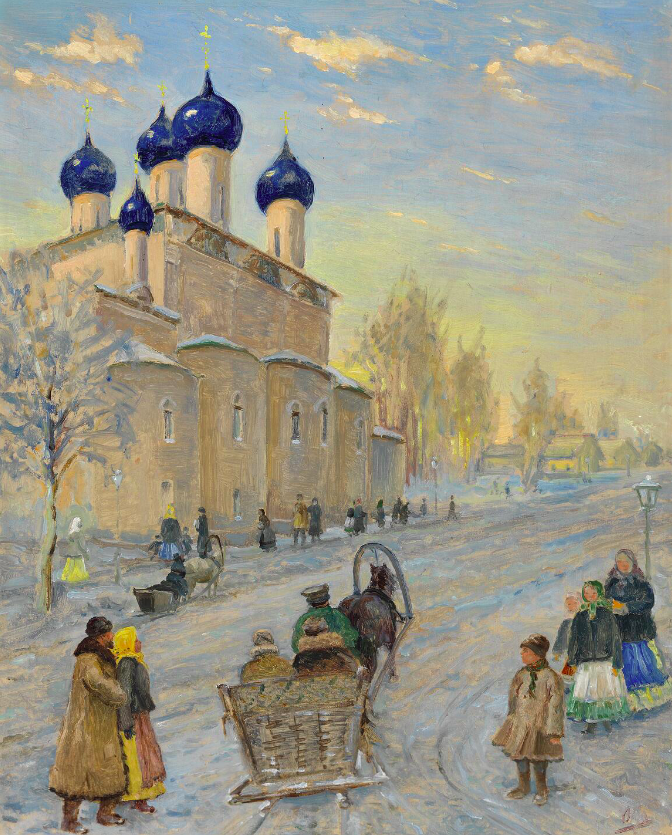 Another unique miniature portrait is by the famous Swedish-born Russian miniature portrait painter Ivan Andreevich Winberg. He was a professor at the Imperial Academy of Arts in St. Petersburg and painted for Russian tsars, specialising in oval watercolours and ivory plaques. This miniature portrait is estimated at GBP 1,725-2,300 (DKK 15,000–20,000) and depicts Tsar Nicholas I of Russia, who was Tsar of Russia and King of Poland. He is best known for his anti-revolutionary policies in Europe, earning him the sobriquet “Gendarme of Europe”. 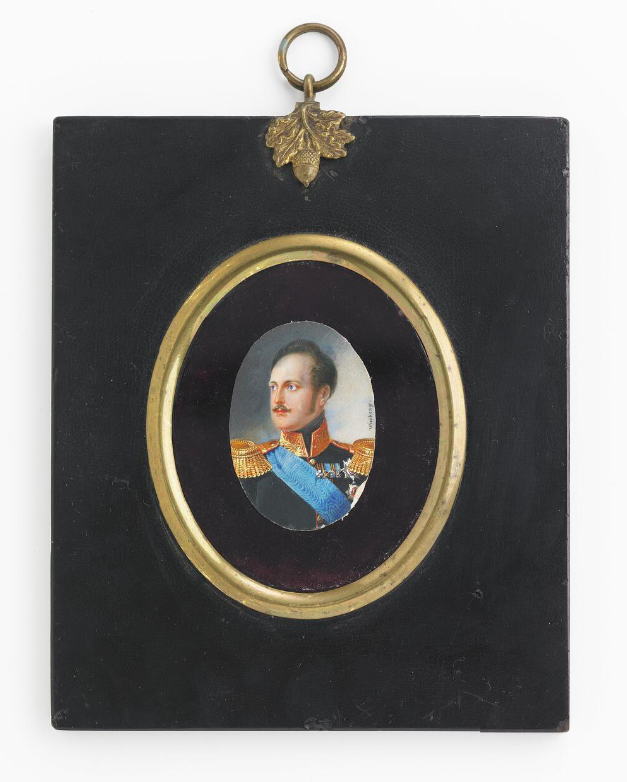 From a Sleeping Beauty to the Defender of War

It is not just works of art from Russo-Danish cultural history that are up for auction this time. Modern art is also in focus. Russian artist and critic Alexander Nikolaevich Benois created a beautiful stage set design for the prologue of the famous ballet “The Sleeping Beauty” by the popular Russian composer Piotr Ilich Tchaikovsky, which is estimated at GBP 11,500-17,250 (DKK 100,000–150,000).

Lot 390. Alexander Nikolaevich Benois (b. St. Petersburg 1870, d. Paris 1960) “La belle au bois dormant, prologue”. A stage set design for the prologue of »The Sleeping Beauty«, the ballet by Piotr Ilich Tchaikovsky. Signed Alexander Benois and inscribed by the artist with the title in French. Tempera and mixed media on cardboard. 60.5×75 cm. Unframed.

Another modern painting in an almost impressionistic style entitled “Frost” was painted by the Russian post-war artist, Igor Aleksandrovich Popov. The painting depicts a view of Moscow Park and differs from his famous landscape paintings with an emphasis on high precision. Estimated at GBP 4,600-5,750 (DKK 40,000–50,000), it is from the art collection of a former European general who was affiliated with the Russian Embassy in Moscow from 1970–1989. 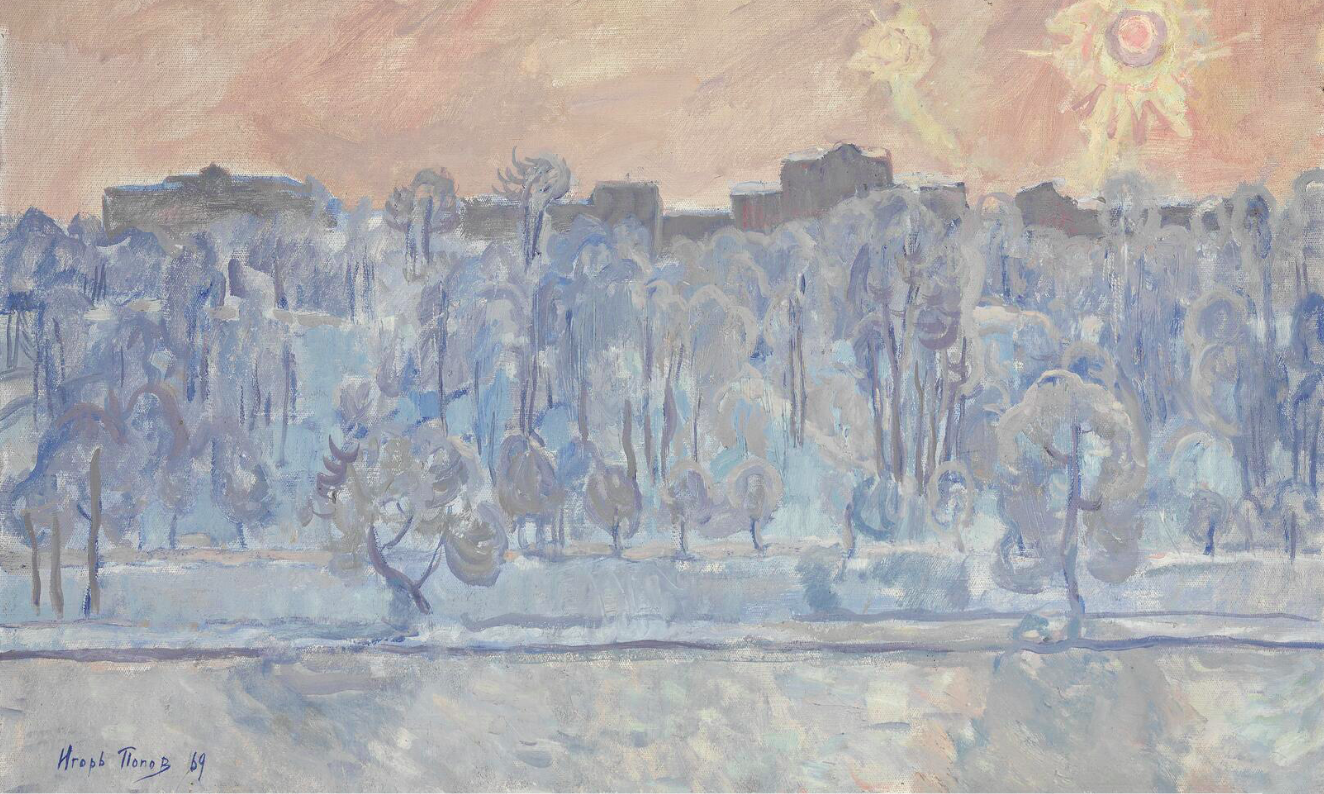 At the more serious end of the auction, we find Russian sculptor Mikhail Konstantinovich Anikushin, who has created a bronze sculpture, which is a draft for the central section of the “Monument to the Heroic Defenders of Leningrad”. The monument was unveiled on the 30th anniversary of the victory of the Soviet Union in World War II and is located on Victory Square in Saint Petersburg to commemorate the heroic defence of the city – that the artist himself participated in. The work is estimated at GBP 1,150-1,380 (DKK 10,000–12,000) and, up until 1990, belonged to the Russian painter Victor Josifovich Reichet, who was a good friend of the artist. (lot 392) 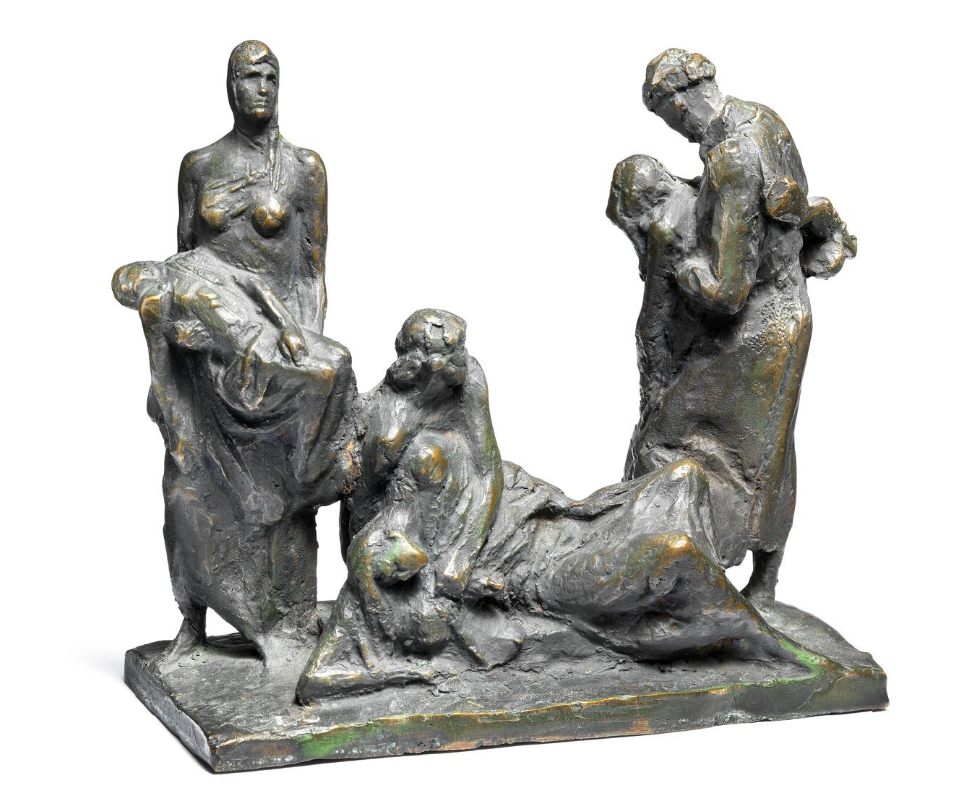 No Russian auction would be complete without antiques from the iconic House of Fabergé. In 1886, Mikhail Perchin became the head workmaster at Fabergé, where he, among other things, oversaw the production of the famous Fabergé eggs. He is the man behind the auction’s scent bottle in two-colour gold and decorated with translucent white enamel, estimated at GBP 1,725-2,300 (DKK 15,000–20,000). 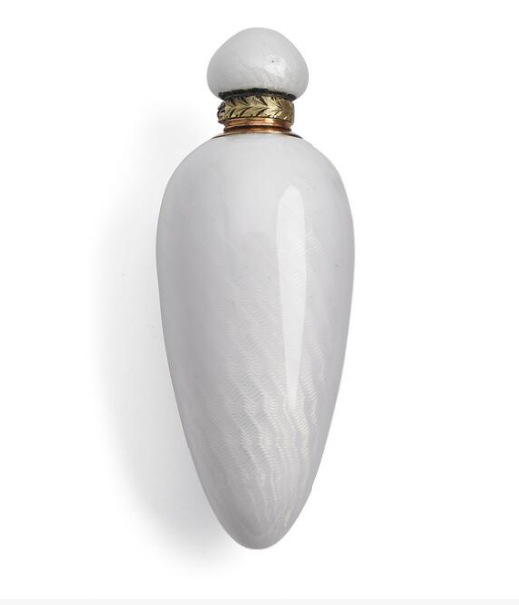 August Hollming became a workmaster for Fabergé in the 1880s. The auction features a spherical watch with a white enamel dial and Arabic numerals suspended from a brooch. It is of 14 ct. gold, purple enamel and adorned with a fabulous fish, diamonds and a ruby. The watch appears upside down to the beholder but hangs correctly for the person wearing it and is estimated at GBP 5,750-6,900 (DKK 50,000–60,000). (lot 418) 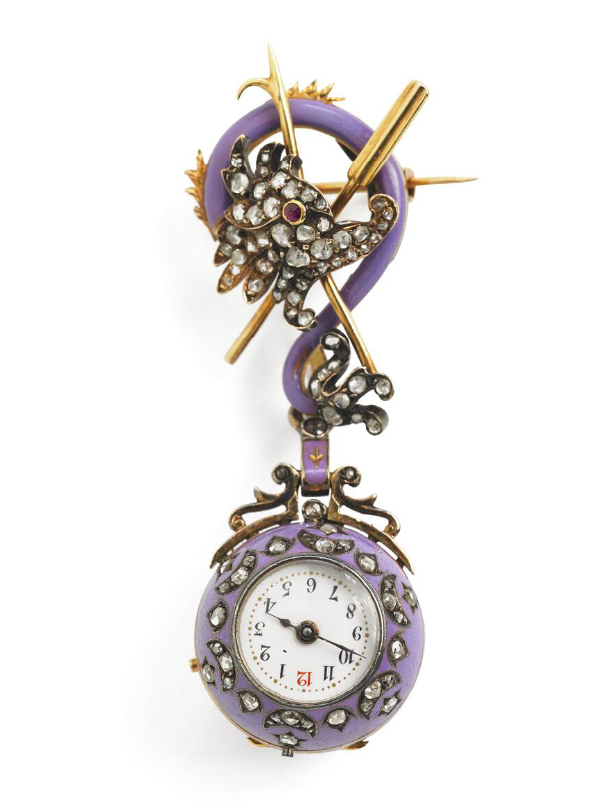 Workmaster Feodor Rückert also worked for Fabergé from 1887. Among other things, he was a pioneer of the Neo-Russian style and known as the “Master of Enamel” due to his special technique with cloisonné enamel. The auction features not one, but two caskets adorned with the masterful enamel. One carries an estimate of GBP 5,750-6,900 (DKK 50,000–60,000) and is made of silver-gilt, decorated with stylised flowers and geometric patterns. (lot 399) The other is silver-gilt with a large faceted citrine and 18 tourmalines and beryls, estimated at GBP 9,200-11,500 (DKK 80,000–100,000). (lot 396) 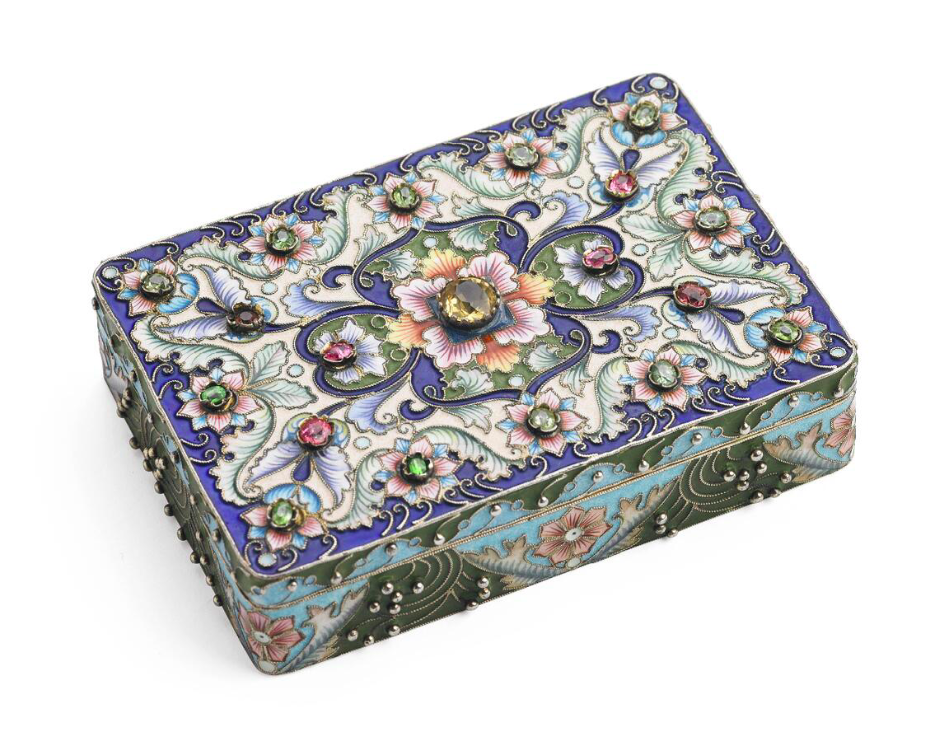 A Russian Online Auction will also take place a few days later at bruun-rasmussen.dk at 5 pm on Monday 6 December. View the selection here.