Station “Russia” at the Architectural Biennale 2018 in Venice

Russian pavilion at the 16th International Architectural Biennale 2018 in Venice will turn into a railway station.

The exhibition concept for the Russian pavilion has been kept secret until recently: finally, an agreement has been reached in the course of the delayed negotiations with the potential sponsor, JSC Russian Railways. Now they continue negotiating with a private foundation. The budget of the exhibition will amount to more than 1 mln. Euros.

The idea of the Station Russia was suggested by the present Russian Pavilion  commissioner Semyon Mikhailovsky, Rector of the Repin Institute of Painting, Sculpture and Architecture in St. Petersburg, where he holds the post of an  Associate Professor at the Chair of Architectural Theory and History. In Mikhailovsky’s opinion, railroads traversing vast Russian expanses, hopes for a better life in future and communication in the broadest sense of the word are the distinctive characteristics of Russia. This also correlates well with the main theme of the Biennale – Freespace.

“Free space is the foundation of architecture, which rests upon such concepts as generosity and humanity. Free space is a way of seeing the world in a new light,  discovering how architecture can improve the quality of life for every person living on our fragile planet“. The concept has been announced by the curators, co-founders of the Irish bureau Grafton Architects in Dublin and permanent participants of the Biennale Yvonne Farrell and Shelley McNamara. It should be viewed as a follow up on the discussion about the social architecture and the quality of life,  initiated by the previous curator of the  Venetian Architectural Biennale –  Alejandro Aravena from Chile.

“The exhibition we prepare is not just about architecture.  A Railway station is also an essential part of our life as a place for meetings and farewells, tears, emotions. If you are watching a good old movie, a railway station will be a necessary element of the emotional impact on the audience, and that is an important aspect in the arrangement of our exposition as well” – said Semyon Mikhailovsky at the 6th St.Petersburg International cultural forum.

The exhibition consists of five sections, each taking a separate room in the Russian Pavilion. In the large central hall named the Project Depot  there will be displayed  models and drawings of such acclaimed  train stations, such as Sochi (built by Alexei Dushkin) , St. Petersburg (like the famous Vitebsk railway station designed by Stanislav Brzhozovsky ), Nizhny Novgorod and Moscow (like Savelovsky station in Moscow engineered by A. S. Sumarokov and spearheaded by Savva Mamontov).  They will also be accompanied by the models of a newly built by Studio 44  Ladoga station or  Nizhny Novgorod.  The projects by Nikolai Shumakov, President of the Architects’ Union of Russia and chief architect of JSC “Metrogiprotrans”, will also feature there. Shumakov designed numerous underground stations and lines in Moscow.

From the Project Depot one will get into the Waiting Hall of the Future  with a large-scale video screen and models of the future railways and cities.

“We are not only going to display the projects that have already been constructed,” – comments Semyon Mikhailovsky, – “There will be a space for the Russian avant-garde projects and cities of the future. The exhibition in the making is not about the architecture, — it is about people. And even though it is all taking place at an Architectural Biennale, we still wish to pair all this with aesthetic experience and talks  about life“.

However, one major issue still persists: how to master vast geographical space  without being overpowered by it.

The Architectural Biennale will take place in Venice between 26 May to 25 November 2018.

Other Articles By Anna Kanunikova 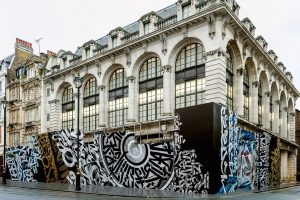 Pokras Lampas on his commission for Dover Street Market