Stage Russia and Pushkin House will be offering an online screening of the Satyricon Theatre’s Golden Mask Award-winning “King Lear” followed by a Q & A with its leading actor Konstantin Raikin. Staged by Yury Butusov, the film will be available for online viewing on 8-10 April, followed by a live Zoom event on 10 April at 2PM (GMT) featuring Raikin in conversation with Russian theatre scholar Michael Earley. The movie will be presented in Russian with English subtitles, and the Q&A will be conducted in English, and Russian with English translation. 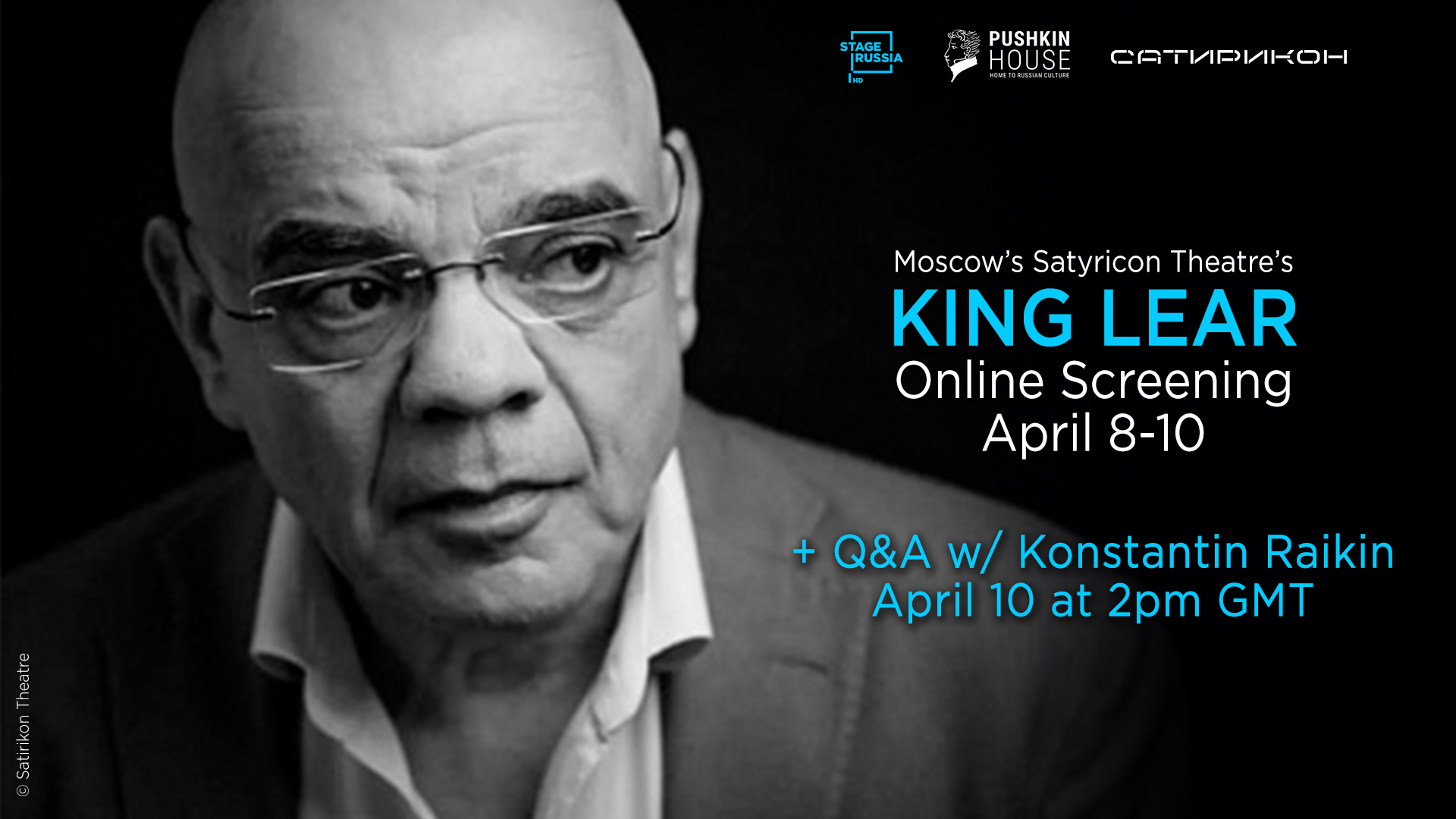 Yury Butusov’s award-winning staging of King Lear tells a story in which the collapse of a family, the collapse of a country, and the collapse of an individual are all connected to each other. In Shakespeare’s classic work, Lear imagined himself to be God’s equal – and so he divided his kingdom between his daughters just to see what would happen.

This is the 6th such event offered by Stage Russia. Past online screenings included the Red Torch Theatre’s “Onegin”, the Vakhtangov Theatre’s “Anna Karenina” and the Satyricon Theatre’s “The Seagull”. Previous online Q&As allowed audiences to meet with, among others, Rimas Tuminas, Yury Butusov, Anatoly Smeliansky and Timofey Kulyabin.

“These online Q&As are a terrific way to personalize our filmed performances,” says Eddie Aronoff, managing director of Stage Russia. “Everyone, even the guest speaker, is at home, relaxed, eager to see and meet the artist (and the artist, their audience). It gives theatre fans a real opportunity to delve into a production, to ask a director what he or she meant by this or that. It’s a terrific atmosphere.”

Konstantin Arkadyevich Raikin is one of the most highly decorated Russian stage actors of all time. He is a laureate of the State Prize of the Russian Federation in the field of literature and art, winner of the Crystal Turandot Prize, of the International Stanislavsky Prize and four time Golden Mask winner for Best Actor (1995, 2000, 2003, 2008), including for the roles of Richard in Richard III and Lear in King Lear, both directed by Yury Butusov. In 1967 Raikin entered the Boris Shchukin Theatre Institute and was enrolled in the course of the renowned actor and teacher Yuri Katin-Yartsev. After graduation in 1971, Raikin was invited by Galina Volchek to the highly regarded Sovremennik Theatre, where he honed his craft for 10 years. In 1981, he moved to the Leningrad Theater of Miniatures under the leadership of his father, the revered Soviet actor and comedian, Arkady Raikin. In 1982 the theater moved to Moscow and became the State Theater of Miniatures (in 1987 it was renamed as the Moscow Theater “Satyricon”). In 1988, after the death of his father, Konstantin Raikin became the artistic director of the theatre, now known as Russian State Theatre “Satyricon” named after Arkady Raikin. Since then he has starred in and directed countless award-winning productions.