A highly accomplished and vibrant portrait of the last Tsar of Russia, in the uniform of The Royal Scots Greys, has been placed on loan by the Royal Scots Dragoon Guards Regimental Trust with the National Galleries of Scotland, where it will go on public display this week. 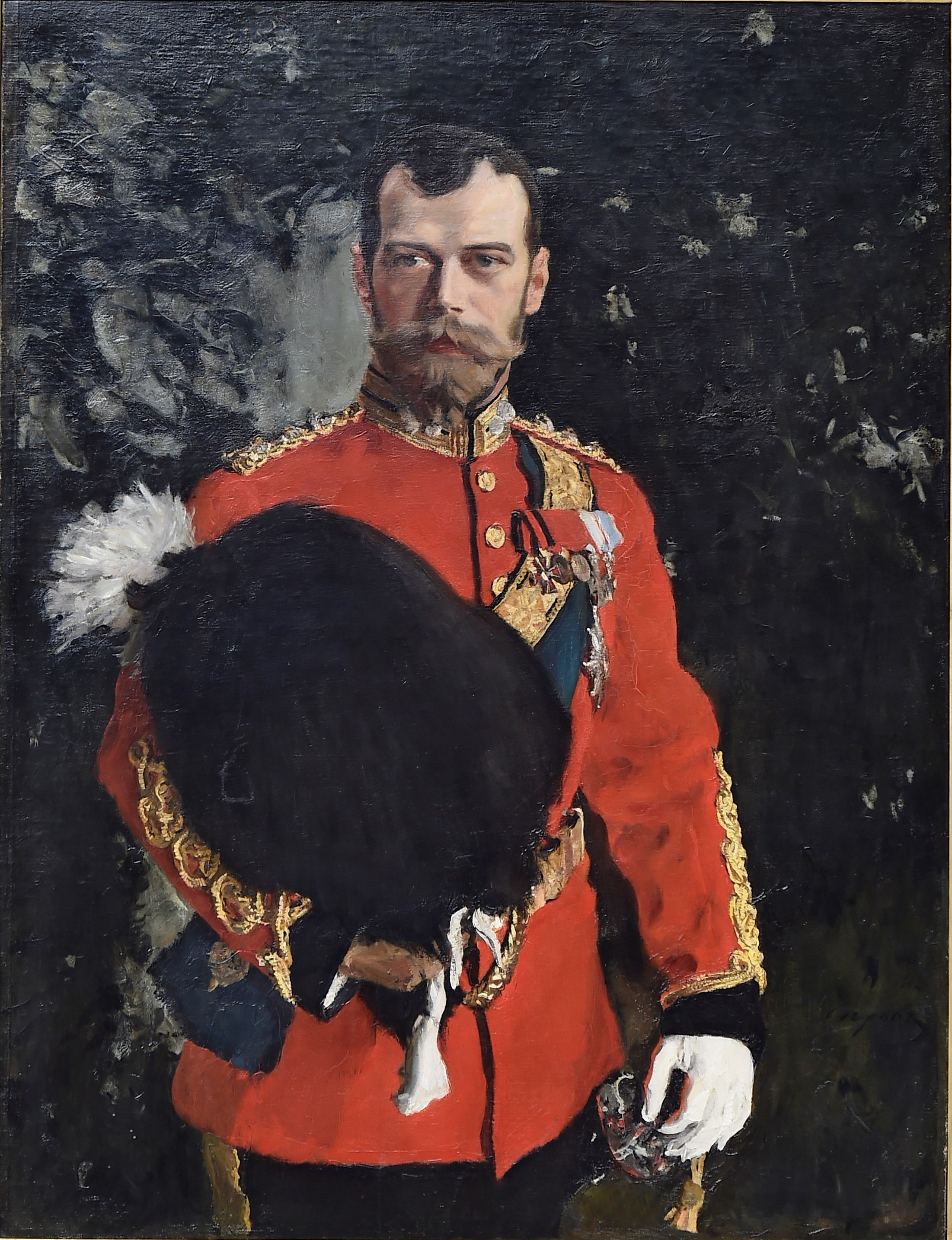 In 1902, Tsar Nicholas II was portrayed by Valentin Serov (1865-1911), one of the greatest Russian painters of the pre-revolutionary era, wearing full dress uniform as the Colonel-in-Chief of Scotland’s senior regiment, the 2nd Dragoons (The Royal Scots Greys). He was appointed to this position in 1894 by Queen Victoria and retained the distinction until his death. The portrait was commissioned by the Tsar and presented to the Regiment. Now its successor Regiment, The Royal Scots Dragoon Guards, has generously lent the painting to the National Galleries. This is an especially noteworthy and poignant gesture at the time of the centenary of the execution of the Imperial family by the Bolsheviks.

The British and Russian royal families had an intimate relationship and Nicholas II made five visits to Britain: in 1894 he stayed with Queen Victoria and spent time with Princess Alix of Hesse, one of the Queen’s granddaughters, who, following his marriage to her, became Empress Alexandra Feodorovna.

Queen Victoria bestowed various honours on the Tsar: he also became a Knight of the Garter, an Honorary Admiral of the Fleet and in 1916 a British Field-Marshal. However, his connection with the Scots Greys appears to have been especially appreciated. In the 1880s he had served in a Russian cavalry regiment and was clearly proud of his new role, wearing his full dress uniform on a number of occasions, including during his time at Balmoral in the autumn of 1896.

It was the 1896 visit that cemented the relationship between the Tsar and the regiment and had an impact on the creation of the Serov portrait. The Tsar was photographed during this visit by Robert Milne, a local photographer, who specialised in portraits. Photographs that he created established the pose later utilised by Serov in his painting.

Born in St Petersburg, the son of a composer and music critic, Serov received a wide-ranging training as an artist in Munich and under the outstanding realist painter Ilya Repin in Paris and Moscow, as well as at the St Petersburg Academy. Although chiefly considered a portrait painter, he also excelled as a master of genre scenes and landscapes and theatrical sets. Extensive travels across Europe allowed him to draw inspiration from a wide range of earlier and contemporary artists, ranging from Velázquez to the French impressionists, Sargent and Boldini, although he forged his own distinctive style.

Serov taught at the Moscow College and received numerous accolades, including a grand prix at the Exposition Universelle in Paris in 1900. His sitters were drawn from right across Russian cosmopolitan society and as well as including the Tsar and his circle embraced the world of writers, artists and actors.

The portrait of Nicholas II – which is the only major oil painting by the artist in any British public collection – formed part of a group of studies of members of the Imperial family depicted in military uniforms which date from the years around the turn of the century. The Tsar’s uniform survives in the collection of the State Hermitage Museum, St Petersburg.  A major and very popular exhibition of Serov’s work was mounted in 2016 at the Tretyakov Gallery in Moscow.

Christopher Baker, Director of European and Scottish Art and Portraiture at the National Galleries of Scotland, commented: “This impressive portrait of the last Tsar of Russia, Nicholas II, is an important, poignant and generous loan to the National Galleries of Scotland, a century after the execution of the Imperial family.  What makes the painting so arresting is its relative intimacy, the intense eye contact with the viewer and singing colours. Painted by one the greatest of Russian artists, whose work is little known in Britain, it has strong and fascinating connections with Scottish military history.”

Brigadier David Allfrey MBE, Colonel, The Royal Scots Dragoon Guards, added: “We are tremendously proud of our Regiment’s history and our association with our Royal Family right back to 1678 and Charles II. In similar vein, our connections with Russia are long-honoured, not just through Tsar Nicholas as our Colonel-in-Chief but through a number of regimental customs and routine contact with friends and families across the years. We carry an icon of Saint Nicholas with Regimental Headquarters on operations and on training and the Serov portrait has traditionally hung at the end of the Officers Mess Dining Room. It is a precious and important object for all of us.”

“We are delighted the National Galleries of Scotland has accepted our Trust’s offer to loan the picture and we are honoured that it will hang in close company with a host of other notable works of art. Great portraits offer an intimate view into the world of the sitter and the painter and this picture serves as a fabulous marker in the colourful and oscillating relationship between our country, Russia and our people over several centuries.”

The portrait will be on display at the Scottish National Gallery in Edinburgh from Tuesday 22 May. Entry to the Gallery is free.