Spectacular Night at the Savoy.

Timur Askerov and Kristina Shapran in Romeo and Juliet.

Kristallin Productions, with Linda Rogers as its director and producer, made its debut with a new ballet programme Sunday at The Savoy, in London, and brought an internationally acclaimed group of dancers. Indeed, the pool of global ballet stars who performed on Sunday night, was more than impressive:  the principles of the Bolshoi and the Mariinsky Theatres,  ex-and- current principals at the Royal Ballet, stars of  Dutch National Ballet, of the Cuban National Ballet and many others.

Rogers’ choice of dancers had been based on profound respect  and well- informed regard for the traditions of the Russian classical ballet  — a more than welcome initiative on the existing London scene. Although, here in London we are spoilt on a regular basis with the most refined contemporary dance performances, hardly the same can be said about good quality, real Russian ballet shows. They appear only sporadically on the London art scene when the Hochhausers bring the Bolshoy and Mariinsky’s ballet performances to the Royal Opera House. However, this happens only once annually, with Bolshoy and Mariinsky theatres performing in alternate years, in order not to clash. And this is a rare treat, indeed! The pain is also somehow alleviated by annual Ballet Galas run by Olga Balakleets. It is also true that the London Russian Ballet School led by former Bolshoi principal Evgeny Goremykin also makes great efforts to bring Russian ballet traditions back to the London stage, but overall, we may quite accurately say that the presence of Russian ballet school on the London stage is still somewhat underwhelming.

Therefore, it is all the more encouraging to welcome a new player who is capable of organising and presenting a vigorous ballet programme of high quality and whose focus and love for the Russian ballet is obvious. The performance programme run by Kristallin Prodactions.by was short, but vivid and memorable. It was also an excellent introduction to the gems of classical ballet repertoire, and of very good taste. It was also a joy to see that the evening attracted some international guests, with celebrities and pop-singers walking the foyer among us, mortals: thus, one could occasionally spot the British singer Brian Ferry in the theatre bar  with a mysterious young lady who also confessed his love of Russian cultural events.

From the very start, Matthew Golding, the ex-principal Royal Ballet, performing in  Solor’s role (La Bayadere,  from Act III Shadow), traversed the Savoy stage in a single soaring jump, setting the tone and standards of the whole evening performance. Golding offered a perfect interpretation of his character from La Bayadere, renewed by Natalia Makarova for the Dutch National Ballet. One could not fail to notice a special melodious plasticity, the  elegant performance, expressive lines of the dancer’s body and the magnificent elevation and rapture in his parties. Indeed, the the Savoy stage was far too small for the dancer of his scope and potential.

Two items on the programme were presented by two principals of the Mariinsky Theater Timur Askerov and Kristina Shapran, embodying the lyrical component of the evening programme. A tender and sensitive duo from Prokofiev’s Romeo and Juliet  was performed by the Russian dancers according to the version offered by the British choreographer, which was in itself intriguing. In Russia, this drama of Leonid Lavrovsky has a completely different dance fabric and emotional overtones. So, the lyric scene at the balcony was  gentle, owing to the emotional and plastic saturation of the roles. It was also an emotional spectacle to view: one could not tear one’s eyes off the flash-like sequences of supports. It was a very welcome bow to Macmillan’s choreography: indeed, Nuriyev and Fontaine were the first ones to dance it!

The second entrance of Askerov-Shapran in Giselle (2nd Act) evoked some most contradictory feelings which ranged from the initial misunderstanding to rapture. At the very first glance, Kristina Shapran’s height does not correspond to our habitual expectations, or the demands to the stature and build of the Romantic ballet performer: it seemed incongruous at first, as we are accustom to expect certain proportions, and far too lean and modern lines of Shapran’s body  did not quite fit into this mould. However, the dancer managed to completely captivate the audience through her special grace,  attention to detail, musical sensitivity and technical prowess, which promises to develop into  a mastery. However,  what is more valuable,  her interpretation of the role bore a mark of true individuality. In any case, it will be interesting to follow her career.

However, the Gala did not only consist of classical ballet performances: the classical pieces were alternating with contemporary choreography. Two (Rise and Fall) by Russel Maliphant elevates contemporary choreography to the status of  sophisticated contemporary art in the truest sense of this word. Visual findings are quite stunning, as they work to unfold a slow build of geometric and sculptural drama of gestures and postures. One cannot help but be lost in praises for the convincing wonderful interpretation of this piece by internationally acclaimed  Ivan Putrov, an ex-Royal ballet dancer who became more experimental once he left the Royal Opera House.

Those who followed the programme closely, could not help but notice a certain competition unfolding over the course of the evening between the National Cuban dancer Taras Domitro and the Bolshoi Principal Igor Tzvirko. A piece from the Wunderland ballet (choreographer Edwaard Liang for Ohio theater) seemed to have demanded the wonders of athletic prowess from the male dancer: the mind-boggling rotations and frenzied support themes in combination with a soft swirling dance, were exhilarating and very demanding technically. This was also one of the best examples of “dancing in the rain”: the Cuban Ballet Royals Taras Domitro and  Adiarys Almeida demonstrated the wonders of overcoming the powers of gravity.

Echoing  this piece, appeared the unexpected Moscow Waltz and Flames of Paris staged by choreographer Vasily Vainonen. The choice of these pieces suggests that the author of the performance programme had both an excellent sense of humour and a good knowledge of the history of the ballet. The Moscow Waltz was also a challenge full of technical tricks. However, it transported us to a totally different era, when the dance was meant to proclaim the happy life of a Soviet man. Igor Tsvirko and Eugenia Savarskaya, both the principals of the Bolshoy, were superb in their roles. They playfully conveyed the moods of the Soviet dramatic ballet: with deft vivacity they were alternating high supports with low jumps. 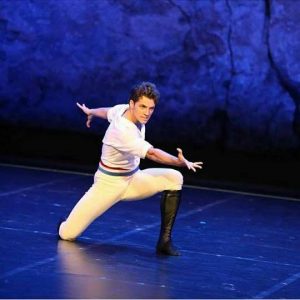 Igor Tsvirko in Flames of Paris

What became clear after the piece from the Flames of Paris, was that the Bolshoi principal Igor Tsvirko was in a perfect form, dancing with complete abandon, body and soul, which was bordering on superhuman. His panther-like jumps, rotations and expressive dancing were defying the laws of gravity.

However, Taras Domitro was not to give up so easily. He made his statement  during the pas de deux from Don Quixote by soaring in a side split.

All these giants, the stars of the best ballet companies, were brought together on a single memorable evening, when the small Savoy Theatre seemed to be bursting at the seams from the onslaught of extraordinary talent, creative temperament and this tingling sensation of excitement at the encounter with something exceptional and unique.

We have certainly had our appetites sharpened, and are now waiting for more. Please!

Other Articles By Marina Shtager 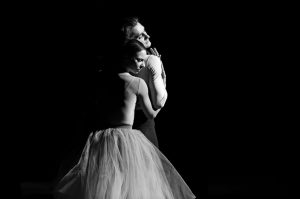 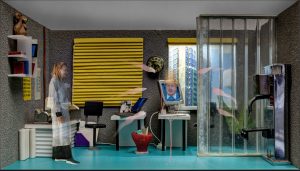