What turn did Russian music take after the 1917? With Stravinsky already in the west, its more experimental side had shifted to Paris and the Ballets Russes, not least with the premiere of The Rite of Spring in 1913. The new Soviet scene was quick to catch up after its own fashion. So much has been written about the move to socialist realism under Stalin, and how Prokofiev and Shostakovich managed to circumvent that up to a point. Yet the state absorption of individual groups, which at first seemed like a good thing, didn’t happen until 1933.

The 1920s, on the other hand, were a hotbed of experimentation reflecting both the ‘mechanical style’ to come out of Paris on the one hand and the twelve-tone and atonal scores of the Second Viennese School on the other (Berg’s Wozzeck reached Russia in the late 1920s). Some of the movers and shakers, like Mosolov and Roslavets, are all but forgotten today; we’ll be hearing some extraordinary recorded excerpts showcasing their work. The pioneering dramas of the young Shostakovich and the rather older Prokofiev in ballet and oratorio will also be illustrated in sound and vision, with passing reference to the visual artists who progressed alongside them.

The axe officially fell on ‘new’ music with Stalin’s attack on Shostakovich’s opera Lady Macbeth of Mtsensk in 1936, which marks our official cut-off point. But we’ll also be looking at how the greatest geniuses got round the ukase with daring and skill. Come along and experience one of the richest times in musical history anywhere.

Virtual Artistic Residence: Artists are invited to Apply by 20 July 2020

Another artist of the week is now here, can you gu

📷 For the first time, a Russian artist has won

Are you enjoying all the auction updates and keepi

🎞 @margy_kinmonth discovered an unseen clip of

📋Have you already caught on to #russianartweek?

⛪️ On 10 July, the auction house Millon in Par

🖊 Do you make, write about art or are you passi 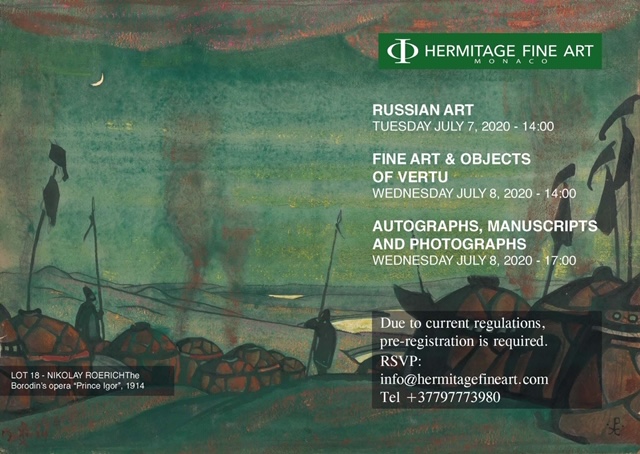