On 18 January 2022 Kino Klassika in partnership with the Institut Français will launch Soviet 60s: A Turning Point in Cinema, a monthly in-cinema film series spotlighting a selection of films from the decade that changed both cinema and the world: from beloved Soviet comedies to rarely-screened New Wave classics.

The Sixties are synonymous the world over with rebellion and reaction, and the Soviet Union was no different. Post-war and post-Stalin, the decade saw a nuclear superpower on the brink of change and reckoning anew with its place in the world – caught between the Thaw and Stagnation, optimism and pessimism, liberalisation and repression. Just as a mass consumer culture emerged that made stars of its popular heroes and villains, a generation of auteurs transformed film culture with their daring visions, confronting the past and daring to imagine the future. 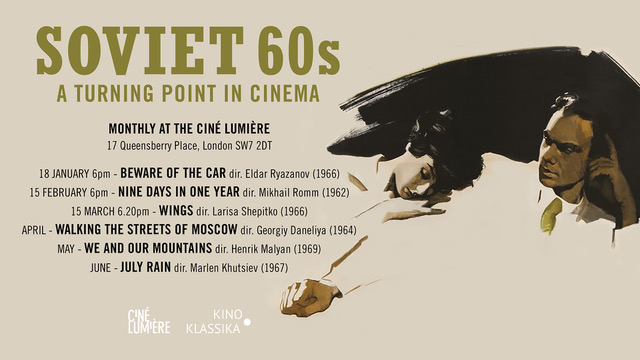 We spoke with Sam Goff, Editorial Director for Klassiki about the festival programme for the season. Sam is a lecturer in Russian and Soviet culture at the University of Cambridge. Previously he was Features Editor at The Calvert Journal, and has written on the film and culture of Russia and the post-communist world for numerous publications.

Elena Shampanova: Sam, first of all, please tell us a few words about yourself. How did your interest in Soviet culture begin and how has it developed?

Sam Goff: My route into this world was very straightforward: I studied Russian at university. That was my first contact with Soviet culture. I’ve been studying, and latterly teaching Soviet culture since then; I’ve worked on all sorts of culture, but these days my focus is very much on cinema. I think my first Soviet films would have been the Tarkovsky classics. When I was living in St Petersburg as an undergraduate, my Russian teacher had us watch Ryazanov’s Beware of the Car, which was my first exposure to ‘popular’ Soviet culture of the kind that foreigners don’t tend to hear about – and now that film is opening our season.

Elena Shampanova: The title of the season you curated for Klassiki is “Soviet 60s: A Turning Point in Cinema”, why so?

Sam Goff: We think the 1960s are a fascinating decade. In artistic terms, the promise of the early post-Stalinist years is starting to wear off; in the mid-60s, films start being banned with greater regularity. But at the same time, you have the emergence of a new generation of filmmakers who are either far enough removed from the formative, traumatic experiences of the recent past – Stalinism and the Second World War – or simply relate to them in new, divergent ways, that they can provide a fresh perspective on what’s going on. Simultaneously, you see the real consolidation of a kind of mass culture – what we might call ‘consumer culture’ – that becomes embedded in the popular consciousness. Those are the two currents, the popular and the auteurist, very broadly speaking, that we wanted to place side by side in the season. In a global context, the 1960s are understood as a period of rebellion, generational conflict, post-war reckoning: May ’68, the sexual revolution, and so on. But the Soviet Union is often left out of that picture. So we wanted to show that these debates were going on within the USSR as well, that people there were, in their own way, reckoning with their political legacy and asking where they might be heading as a country.

Elena Shampanova: What are the highlights of the programme?

Sam Goff: They’re all great! It’s so rewarding that audiences will be able to watch a film like Walking the Streets of Moscow on a proper cinema screen: it’s so delightful, it deserves to be experienced at the proper scale, in public. We’re also partnering with the Armenian Institute for the screening of Henrik Malyan’s satire We and Our Mountains, which is particularly exciting, because it provides a perspective on Soviet filmmaking that most people outside the former USSR would otherwise likely miss entirely.

Elena Shampanova: What are your personal favorites?

Sam Goff: July Rain would be in my shortlist for the best Russian-language films of all time. Marlen Khutsiev is a master and I think this is his most perfectly realised film, so I’m thrilled it’s closing the season. It’s so exquisite, melancholy, unresolved. I’m also particularly excited to be screening Mikhail Romm’s Nine Days in One Year, which I think is criminally underappreciated outside of Russia. You can really see in that film the extent to which foreign film cultures were influencing Soviet directors at the time, but it’s also completely ‘native’, speaking to the place of the Soviet Union in a post-nuclear world. And Romm is a very important figure in the development of Soviet auteurism: Tarkovsky, Shepitko, Konchalovsky, Panfilov all studied under him in Moscow.

Elena Shampanova: How can different audiences relate to the Soviet realia in the films? Is there anything specific they should look out for?

Sam Goff:  Filmmaking craft is a pretty universal thing; we look for it and react to it in whatever film we watch, regardless of context. The level of cinematography, screenwriting, acting, composition in the Soviet Union in this period was very high, as all of these films demonstrate. And the material details are no more indecipherable than any other film, I don’t think. The world of black market commission shops and amateur theatre clubs in Beware of the Car, for instance, might seem a little strange at first, but it’s no more off-putting than a film like Casablanca being set in a Moroccan casino. As always with Soviet culture, it’s important not to treat it as if it came from some forbidding, alien world.

Unassuming insurance agent Yuri Detochkin leads a double life as a daring car thief in this iconic caper. Frustrated with the corruption and lassitude of the Soviet elite, Detochkin plays Robin Hood, stealing cars and donating the proceeds from their sales to orphanages. One of the most popular films in Soviet history Beware of the Car blends sharp satire with affectionate nods to various cinematic traditions, from film noir to the silent comedies of Lloyd and Keaton.