This June, Sotheby’s London will stage the largest ever online sale series of Russian art. Bringing together a wide array of Russian Pictures spanning two centuries and representing many of the most important movements in Russian art, with an exceptional selection of works of art by the most revered of Russian makers and craftsman, the two sales will open on 1 and 2 June, with a combined estimate of over £11 million.

The Russian Pictures sale (1 -8 June) features a particularly strong selection of works from the early 20th century, including two early canvases by Mikhail Larionov, as well as an important work on paper by Natalia Goncharova inspired by Russian Orthodox icons. A large selection of Soviet-era pictures as well as contemporary works are also on offer. The 19th-century section includes a rare view of Capri by Sylvester Shchedrin, as well as several works by Ivan Aivazovsky, the artist whose monumental painting The Bay of Naples, achieved a new record price (£2.3 million / $2.8 million) for any painting offered in an online sale, in the equivalent Russian Paintings auction last year.

The Russian Works of Art, Fabergé and Icons sale (2- 9 June) is led by a historic group of Fabergé, with significant exhibition history and provenance, and Military porcelain plates from an important UK private collection. The sale brings together an unprecedented group of Imperial presentation pieces, including an Imperial presentation snuffbox, as well as a rare group of twenty-four Russian Military Orders from an Important Swiss Collection.

One the largest and most accomplished of Larionov’s impressionist paintings, Les Feuillages was recently rediscovered in an American private collection. Appearing at auction for the first time, the work dates to an early key period in the artist’s career when Larionov spent several summers at his grandparents’ house near Tiraspol, painting a series of pictures of their garden, roses, and trees. Most likely dating to 1907, it shows the influence of the French Impressionists, whose work Larionov would have known from exhibitions in Russia and Sergei Shchukin’s collection. Yet the palette of greens, blues, and silvery greys indicate a shift towards Symbolism and reveal the influence of artists such as Viktor Borisov-Musatov. During the late 1950s and the 1960s a flurry of exhibitions of Larionov’s work in commercial and public galleries, as well as new publications, recognised the important contribution the artist made to the development of modern art. Works from this formative period in the artist’s career rarely come to auction.

Last offered on the market almost forty years ago, this impressive work, telling the life of the two martyrs, was first exhibited in Moscow in 1913 at The First Lubok Exhibition. Despite its short duration, the display marked an important moment in the revival of traditional forms of Russian visual culture. Depicting Florus and Laurus, the protectors of horses, the work continues Goncharova’s exploration of peasant traditions, which she focused on in her oils of the period. 1913 was also a key year for Goncharova personally, with the opening of a large solo exhibition of her work – comprising over 800 works that the artist had created since 1900 – that solidified the artist’s position at the forefront of the Russian avant-garde. 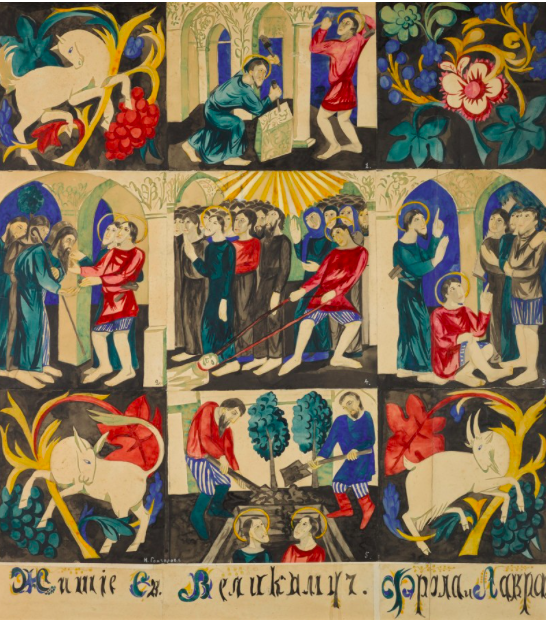 Stylistically, Nude shows similarities to other paintings by Larionov thought to date from around 1907-1908, a key period in the artist’s development when he was exposed to a variety of influences, in particular French post-Impressionism. In 1906, he visited Paris for the first time, and in 1908, he participated in the first Golden Fleece exhibition in Moscow, at which contemporary Russian art was shown alongside modern and contemporary French painting. 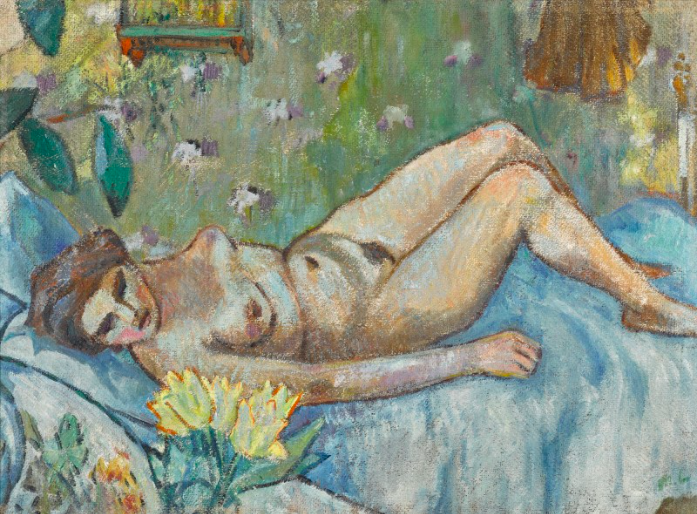 Renowned for his seascapes, Aivazovsky occasionally turned his attention to land-locked subjects. He would go on to define the genre of seascape painting and redefine its place in Russian art, finding fame both in Russia and abroad.

Man from Siberia belongs to a series of paintings depicting Russian peasants, which Rozhdestvensky worked on during the first half of the 1930s and which were created under the influence of Malevich’s post-Suprematist, peasant-themed paintings. Appearing at auction for the first time, the painting was acquired by Galerie Gmurzynska directly from the artist and was included in the artist’s solo exhibition held at the gallery’s space in Cologne in 1993. Most recently, it was exhibited at the 2006 retrospective of Rozhdestvensky’s work held at the State Tretyakov Gallery in Moscow. The geometricised background and the man’s elongated facial features both echo Malevich’s compositions, yet the work’s colour scheme – inspired by the beauty of the landscapes of his native Siberia and its people – points to Rozhdestvensky’s quest for his own, distinct style. *Sotheby’s holds the top 10 prices for artist at auction* 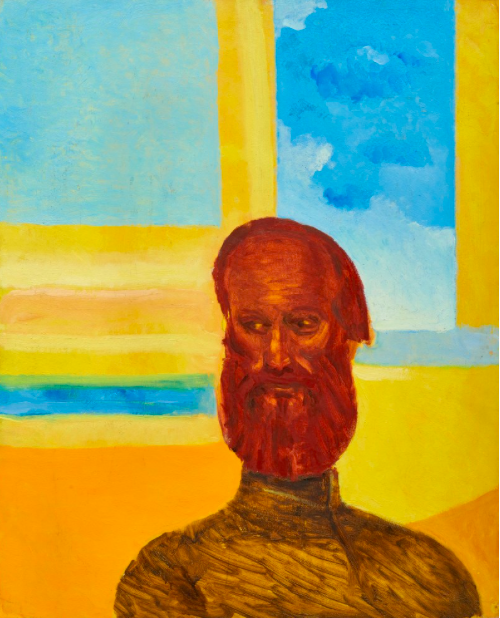 These two panels by Sudeikin were painted in 1916 for a basement cabaret-cafe that became a meeting place for writers, poets, musicians, and artists, and ultimately, a focal point of Russian Modernist culture with staged poetry performances, lectures, debates, music, and dance. To block out every slither of light cast by the brightest of Petersburg White Nights into the vaulted room adjacent to the stage, the artist painted scenes with the characters of the Commedia dell’arte on plywood, in order to cover the windows. The very fact that these scenes were not painted directly onto the walls meant that they were able to be removed after the cabaret closed its doors in 1919. The panels’ remarkable survival was first documented during the early 1990s when they resurfaced in France. 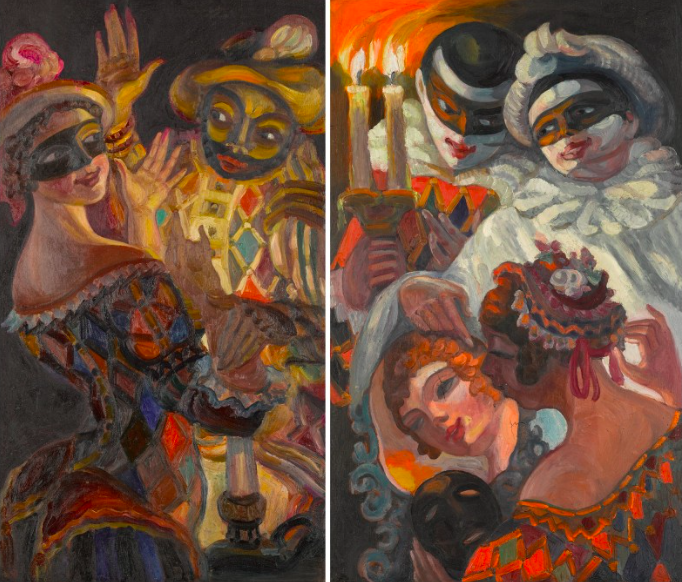 The Island of Capri became a refuge for Sylvester Shchedrin during the last decade of his life. Painting directly from nature, he would add figures – drawn from life and captured in his sketchbooks – to his canvases back in the studio. Works from the artist’s late period appear infrequently on the market.

In the same family collection since 1969, The Hunters is one of the most accomplished works by Pokhitonov to appear at auction in recent memory and brings together elements of the influences which formed his style, namely that of French nineteenth-century landscape artists and Russian landscape and genre painting.

The Rothschild family were the most important patrons of Fabergé’s London branch, second only to the Royal family in terms of the scope and importance of their purchases. Referred to by Henry Bainbridge, manager of Fabergé’s London branch, as ‘Their Exquisitenesses’, members of the extended family patronized Fabergé often for both personal commissions, and as the primary source for their generous gift giving. This photo frame – of an octagonal shape which is very rare amongst the firm’s production – was formerly exhibited with a photograph of Lady Aline de Rothschild Sassoon and belonged to Sir Edward Sassoon. 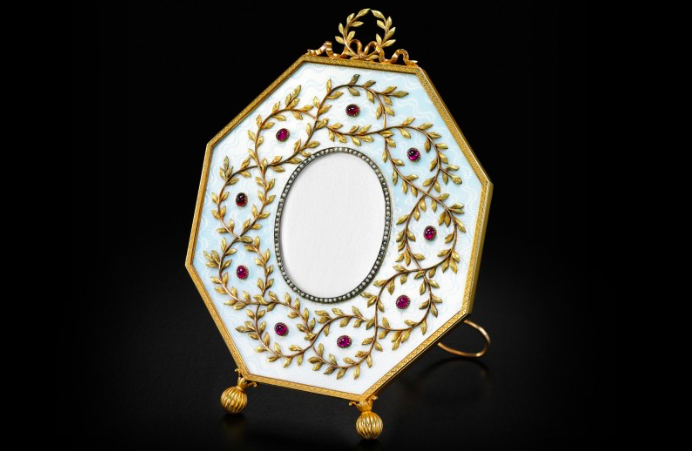 Offered from the same important collection is a Fabergé Jewelled Gold-Mounted Aventurine Quartz Hand Seal, Moscow, circa 1890, est. £10,000-15,000, which forms part of a rare group of hardstone seals by Fabergé that employ hardstone or semi-precious materials and an elegantly designed gold mount, and an Important Fabergé Miniature Jewelled, Nephrite and Guilloché Enamel Kovsh, Probably St Petersburg, circa 1900, est. £18,000-25,000

The sale also features a Fabergé Platinum, Gold and Diamond Brooch, Workmaster Albert Holmström, Probably Designed by Alma Pihl, St Petersburg, 1908-1917, est. £20,000-30,000 – amongst the last of Fabergé’s works, created in 1916. The technique relates to that of the Imperial Mosaic Egg in the Royal Collection, designed by Alma Pihl, suggesting that this could be a new discovery in the Fabergé designer’s oeuvre.

This Imperial presentation snuffbox by Bolin was completed and delivered to the Cabinet of His Imperial Majesty, Emperor Nicholas II, in March 1909. It was officially presented to Count Carl August Ehrensvärd, who was the Swedish Minister of Naval Affairs, on 16 June 1909 during the State visit of Emperor Nicholas II to Sweden. The opulent cagework of the design, set with rose-cut diamonds and rich in enamel, was priced at 1,600 roubles at the time of its creation. The Imperial Russian court was renowned for presenting lavish gifts to Russian and foreign dignitaries, a tradition that flourished especially during the reign of Emperor Nicholas II. 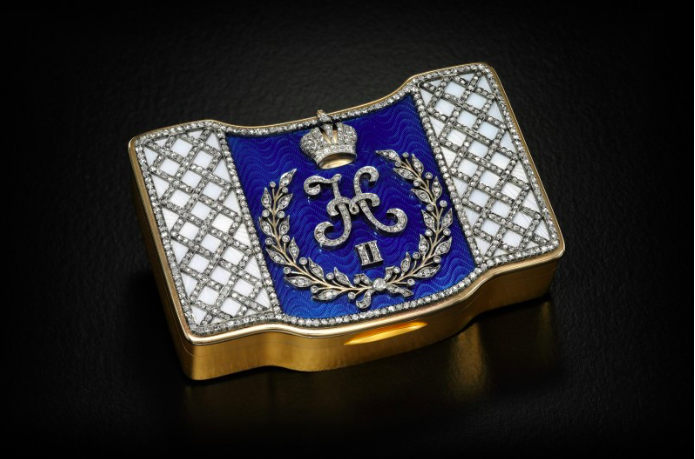 Forming part of a group of twenty-four Imperial orders from an Important Swiss Collection and formerly part of the Sandars collection, The Order of St Catherine came in two classes and was established in 1713 by Peter the Great to commemorate the heroic deeds of his consort, the future Empress Catherine I. The highest class of the order was that of the Dame Grand Cross, which entitled the recipient to both the Sash badge and the Star. All female members of the Russian Imperial family were awarded the Grand Cross of the Order, as were members of foreign Royal families. The statutes of the order dictated that only twelve Dames Grand Cross could be awarded. With so few made, it is extremely rare to find such a complete diamond-set Grand Cross set of the insignia.

Offered from the same Important Swiss Collection of orders, the Order of St Andrew was the highest order or decoration in the age of Imperial Russia, reserved for those who displayed outstanding civilian or military merit, and established by Peter the Great in 1698. It is the only order which includes a collar chain in its insignia.

A very strong selection of Russian porcelain is led by rare Military porcelain plates by the Imperial Porcelain Factory from the Period of Alexander II, offered from the same important collection as the Fabergé octagonal frame. Comprised of sixteen Porcelain Military Plates, the collection is an exciting opportunity to acquire a diverse and comprehensive group of these cabinet pieces, originally designed for Emperor Alexander II and his heir.

The curated selection of porcelain in the sale ranges from the earliest production of the Imperial Porcelain Factory to the Soviet Period. Soviet works include 10 years USSR: a rare and large Soviet porcelain propaganda charger by Aleksey Vorobyevsky executed in September 1927, one month before the anniversary celebration, The Sailor Takes a Walk: A Soviet Propaganda porcelain plate, 1921 and Young Man Reading the Newspaper Pravda: a Soviet porcelain propaganda plate, 1923, both after designs by Alexandra Shchekotikhina-Pototskaya.