Sotheby’s is set to offer works by some of the most pre-eminent creators of Russian art in dedicated online sales of Works of Art, Fabergé and Icons, open for bidding on 9 – 17 June. The Russian Works of Art sale will bring together over 200 works, highlighted by several groups from important private European and American collections of Fabergé, silver and a strong selection of porcelain from the Imperial Porcelain Factory.

Originally scheduled to take place as a live auction, Russian Works of Art, Fabergé and Icons have in light of the current global circumstances been converted online. The start of 2020 has marked an unprecedented year for online sales at Sotheby’s, with over 50 dedicated online auctions being held to date, totaling over $80million. Sotheby’s online sales have continually demonstrated strong sell through rates, such as the sale of works from the collection of Old Masters dealer Rafael Valls that more than tripled the high estimate and saw 98% of the lots finding a buyer, whilst the Contemporary Curated sale, achieved the highest ever total for an online sale staged at Sotheby’s.

Sotheby’s Russian Works of Art sale will be highlighted by significant pieces of Russian Silver and Enamel, including an exceptional Fabergé icon with impeccable provenance. This rare icon of Christ Pantokrator was originally listed in the Imperial cabinet records, as part of a list for possible presentation to the Royal Family of Montenegro from Emperor Nicholas II for their golden wedding anniversary in 1910. The icon was not chosen, probably due to its high cost, and was then gifted to the tea magnate Nicon Molchanov in 1916, and subsequently travelled with the family to China, Brazil and America, from where it now appears for the first time on the market.

The sale features over sixty works by Fabergé, highlighted by frames, cigarette cases and brightly enamelled vertu from an Important German Collection, as well as egg pendants, enamels and rare works from notable private collections. Other works by Fabergé sourced from throughout Europe and America include a rare seed-pearl and enamel charka and a three-piece tea service by Feodor Rückert, both of which epitomise Faberge’s Neo-Russian designs and sophisticated colour palette.

A further highlight of the sale is a rare and historic collection of porcelain and silver from the private collection of Prince Felix Yusupov and his wife, Princess Irina Alexandrovna. An aristocrat and husband to Emperor Nicholas II’s niece, Prince Felix is perhaps best known for his participation in the assassination of Rasputin. Forced into exile following the Tsar’s abdication, Felix and Irina fled Russia with very few of their possessions. The Bolsheviks occupied most of their property, including a mansion in central Moscow, and it was there that a secret storage was found under the staircase in April 1923, containing jewellery, gold and silver. The Soviet government held a very pragmatic view of Imperial treasures, selling them abroad or even melting them down. Thankfully, some of this group was salvaged in September 1927, when a wealthy American traveller Edward C. Finch bought it from a Soviet shop to benefit Russian children. The group of treasures travelled to the United States, where it remained in his family’s private collection ever since. 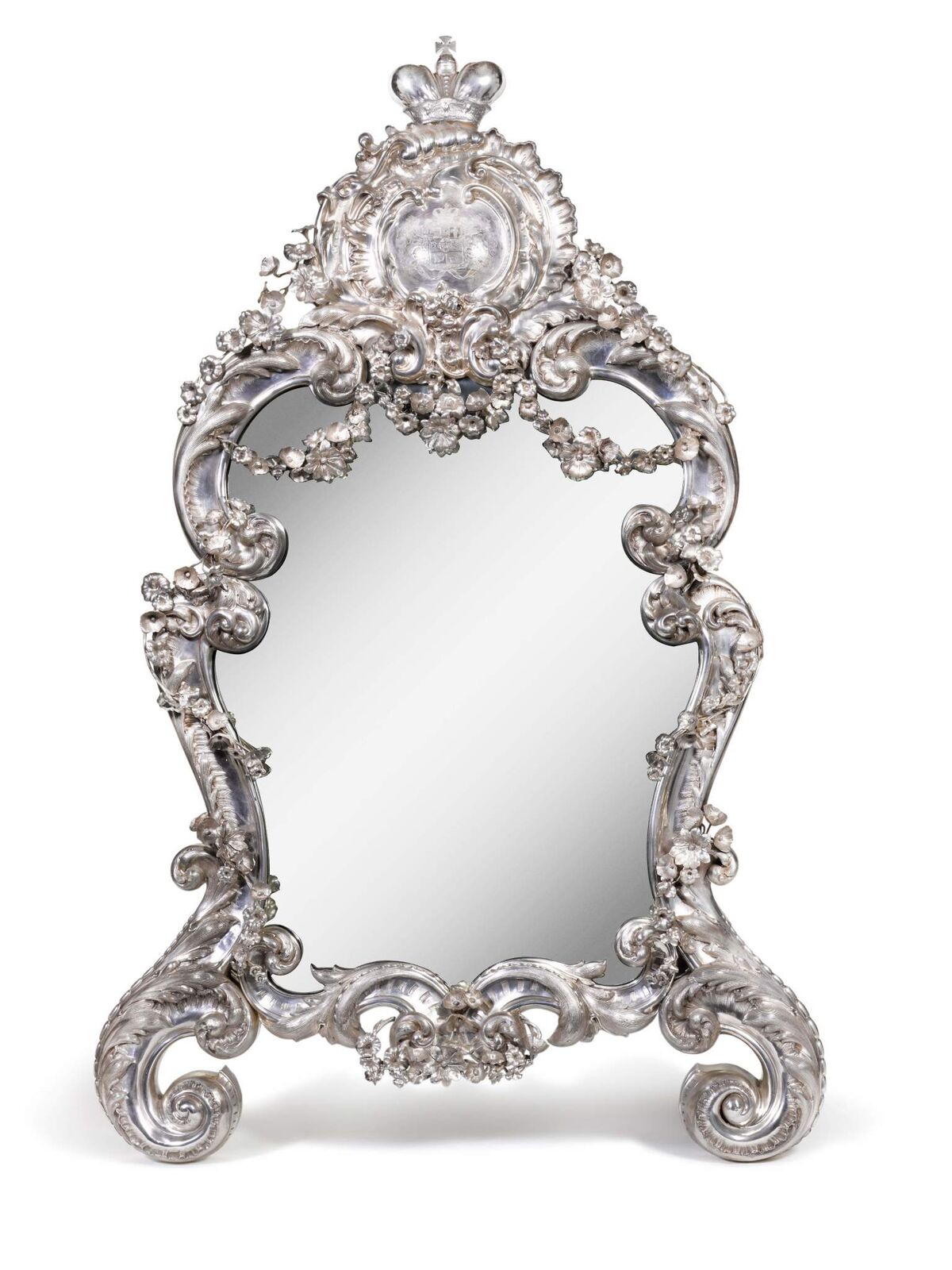 The sale also features a superb selection of porcelain, produced by the Imperial Porcelain Factory from the reign of Empress Elizabeth Petrovna to the final Imperial years of Nicholas II and beyond, into the radically different avant-garde and propagandistic designs of the early Soviet era. Works by the Imperial Porcelain Factory are highlighted by rare pieces from the Order Services and an exceptionally rare porcelain plate depicting Officers of the Caucasus Mountain Guards Squadron from the Period of Nicolas I. Notably featured are rare propaganda plates by the State Porcelain Factory and two lots made at the turn of the century by Kornilov Brothers Porcelain Factory, painted after the famous fairy-tale illustrations by Ivan Bilibin. One of the best-known Russian artists, Bilibin captured the magic of the traditional Slavic folk tales, reviving national mythology and developing a style that would be recognised as typically Russian internationally. 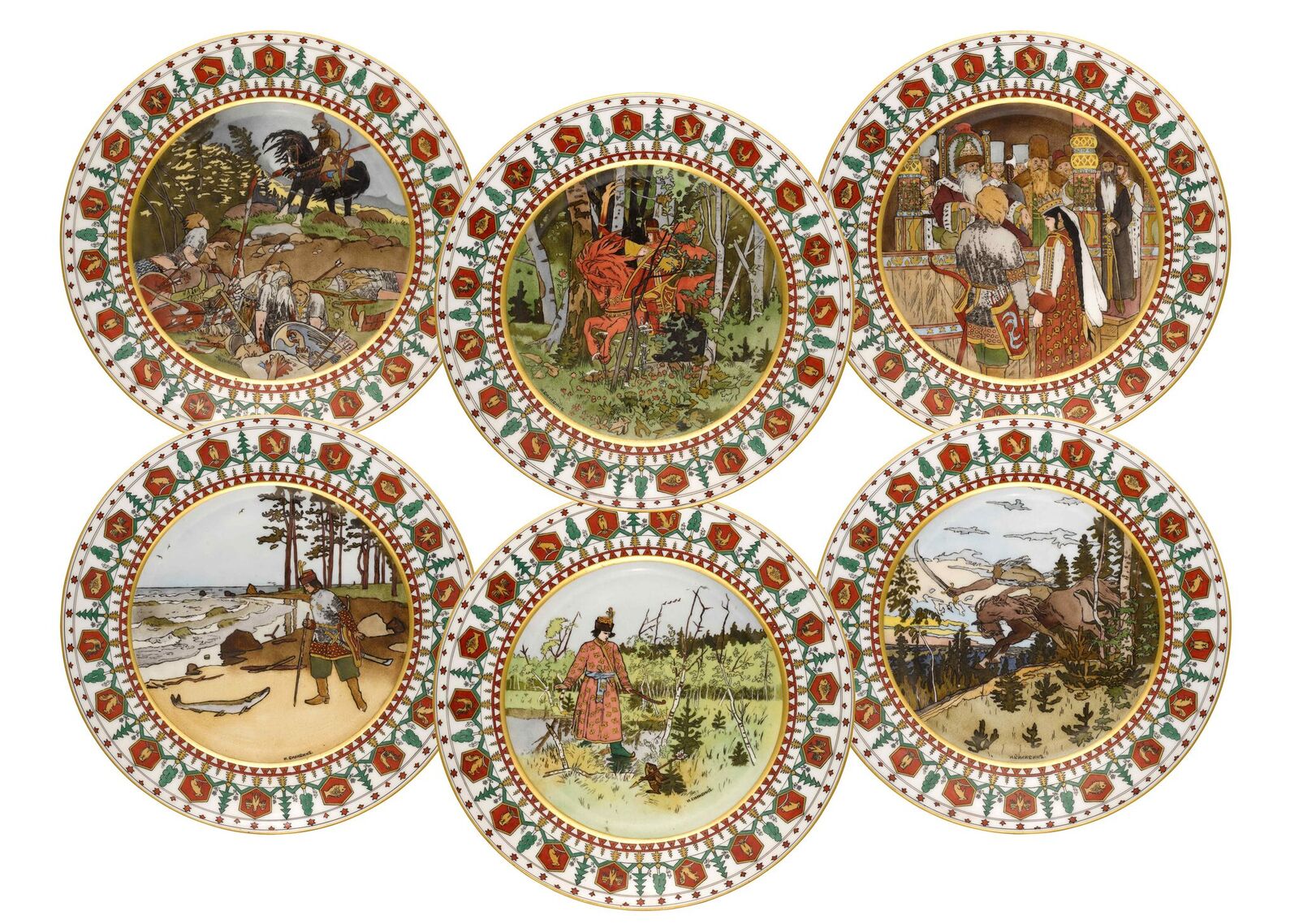