Moscow’s Heritage Gallery are the most eye-catching newcomers at the 2019 BRAFA Art Fair (until February 3) with a taste-tickling array of Soviet furniture, glass, ceramics and textiles led by an Azeri prayer-rug starring Jeremy Corbyn and Sylvio Berlusconi. 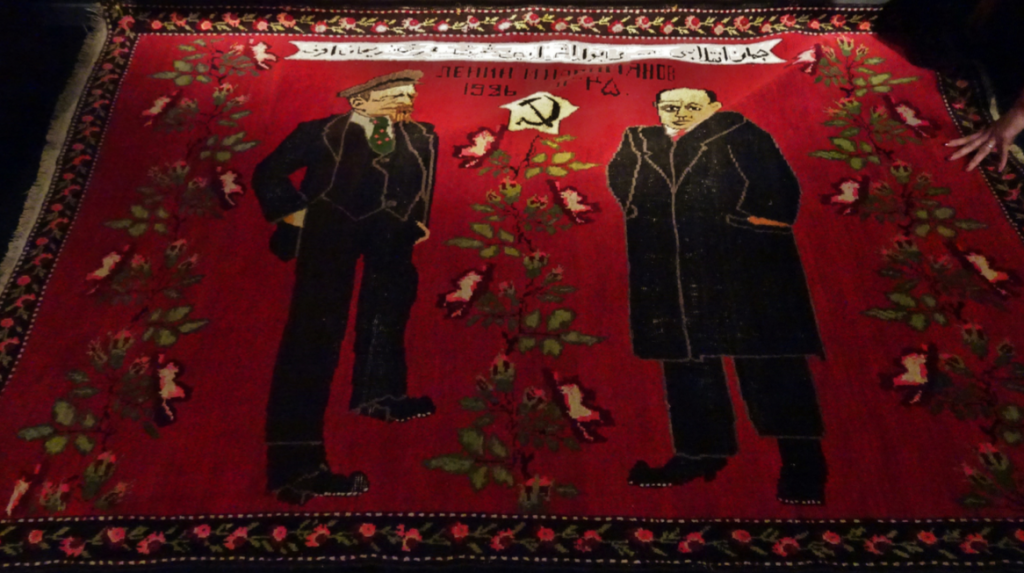 The woollen rug, woven in 1926, purportedly showcases Vladimir Lenin (died 1924) and Nariman Narimanov (died 1925). Codswallop! Since when did Lenin sport hobnail boots and a green tie with pink crosses?

A word on the obscure but remarkable Narimanov (here miswoven Narimyanov): a Gori-educated Azeri playwright, novelist and disillusioned Bolshevik born (in Tbilisi) in April 1870, eight days before Lenin, and one of the greatest statesmen to emerge from the Caucasus. He died in mysterious circumstances’ after accusing Stalin of behaving like a dictator, became a Non-Person during the Purges, was reinstated by Khruschov, buried in the Kremlin Wall and had a Baku Metro station named after him in 1967. 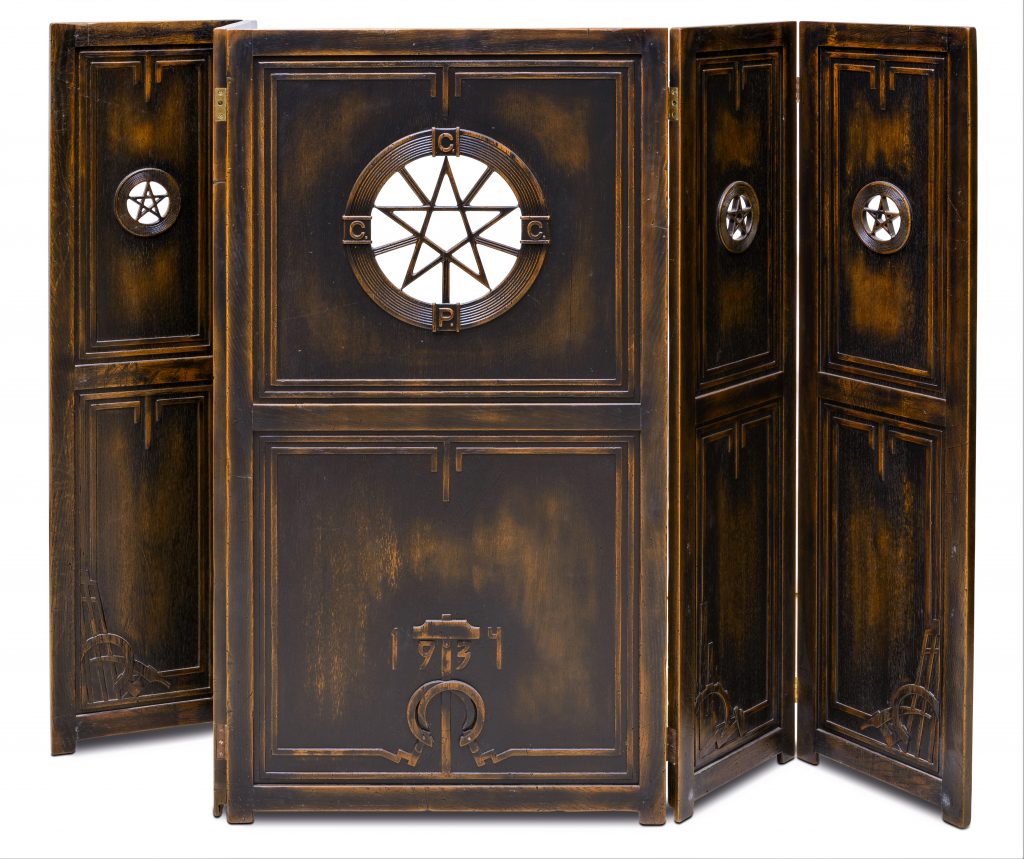 Another wacky offering at Heritage was a 1920s Agitprop table with legs made from rifle-butts and a rough marquetry top incorporating two hammer-and-sickles. Equally extraordinary was a carved oak speaker’s lectern and matching five-fold screen designed in 1934 by Alexander Dmitriev for the ‘Military Youth Camp’ set up by the Leningrad Oblast Education Department in Tsarskoye Selo to house some of the homeless infant vagabonds roaming the streets. The lectern thoughtfully included a built-in gramophone to submit camp inmates to the grim fate of listening to Stalin’s crackly speeches. That fate could have been worse: in 1935, seeking a final solution to the ‘youth gang’ problem, the USSR lowered the minimum age for the death penalty from 18 to 12, and applied it to pickpockets as well as murderers.

The screen was designed to box in the lectern and prevent young Stalin fans from stealing the gramophone. Both screen and lectern were carved with sickles, hammers, cog-wheels, pick-axes, compasses and openwork stars. 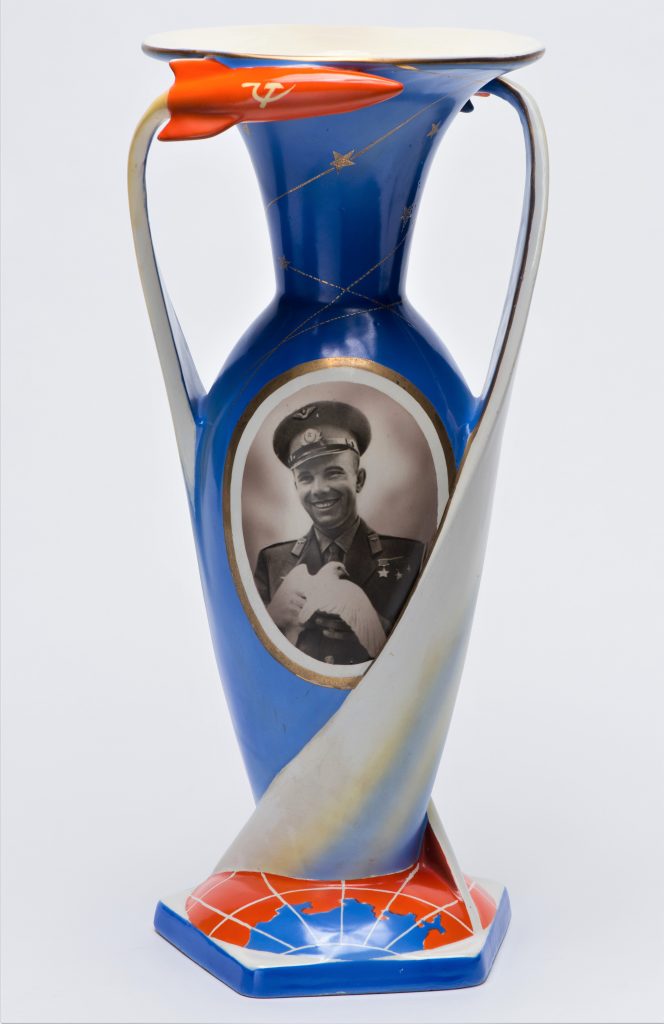 Arrival at BRAFA sets the seal on a successful first decade for Kristina Krasnyanskaya’s Petrovka outfit, who have shown at Design Miami/Basel since 2012. Next stop TEFAF? 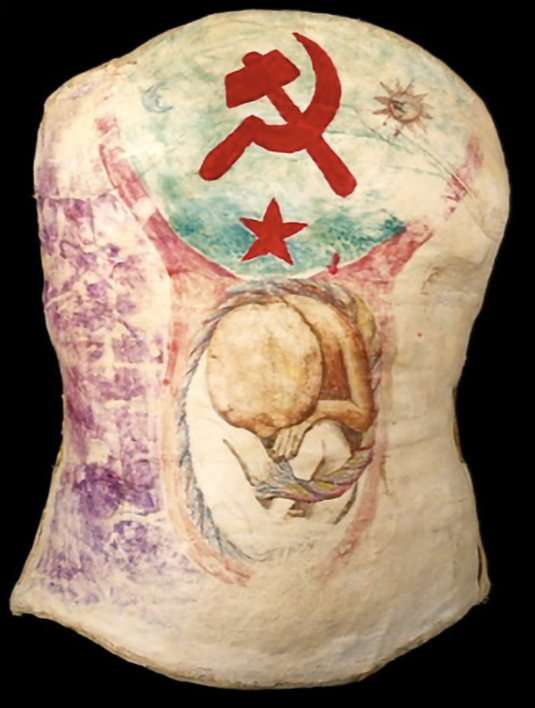 Another hammer and sickle can be admired on the unlikely background of a woman’s corset – made for Frida Kahlo during her confinement at Mexico City’s Hospital Inglés in 1950. Kahlo painted the corset in bed, using a mirror, after plaster had been applied directly to her body.

The colours have faded but the hammer and sickle remain bright poster red. Extensively exhibited on both sides of the Atlantic since 2007 – most recently at the V & A last year – the corset is one of three made for Kahlo and the first to come on the market. Given its €2m price-tag at Sofie van de Velde (Antwerp) it could stay on the market for some time. 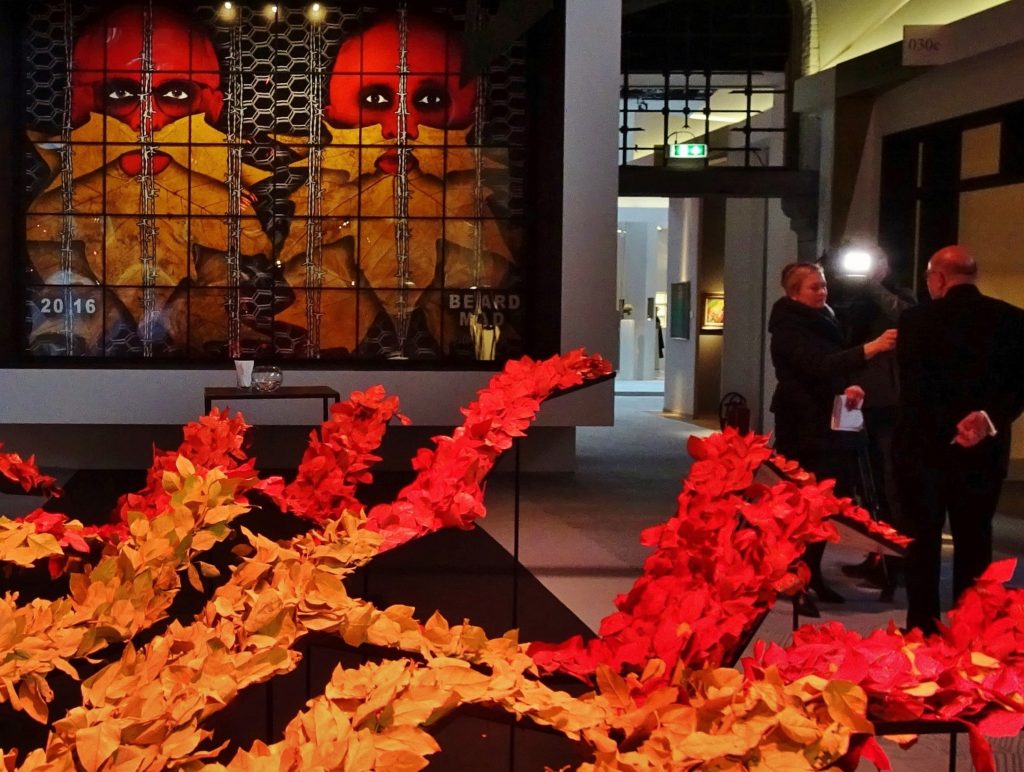 Guests of Honour at this year’s BRAFA are those East End Eccentrics Gilbert & George (no Russian connection here, apart from George’s uncanny resemblance to Lord Poltimore). The duo’s art has long subsided into repetitive narcissism, but their surrealist song-and-spiel comedy act – part Monty Python, part Morecambe & Wise – remains as slick and entertaining as ever. 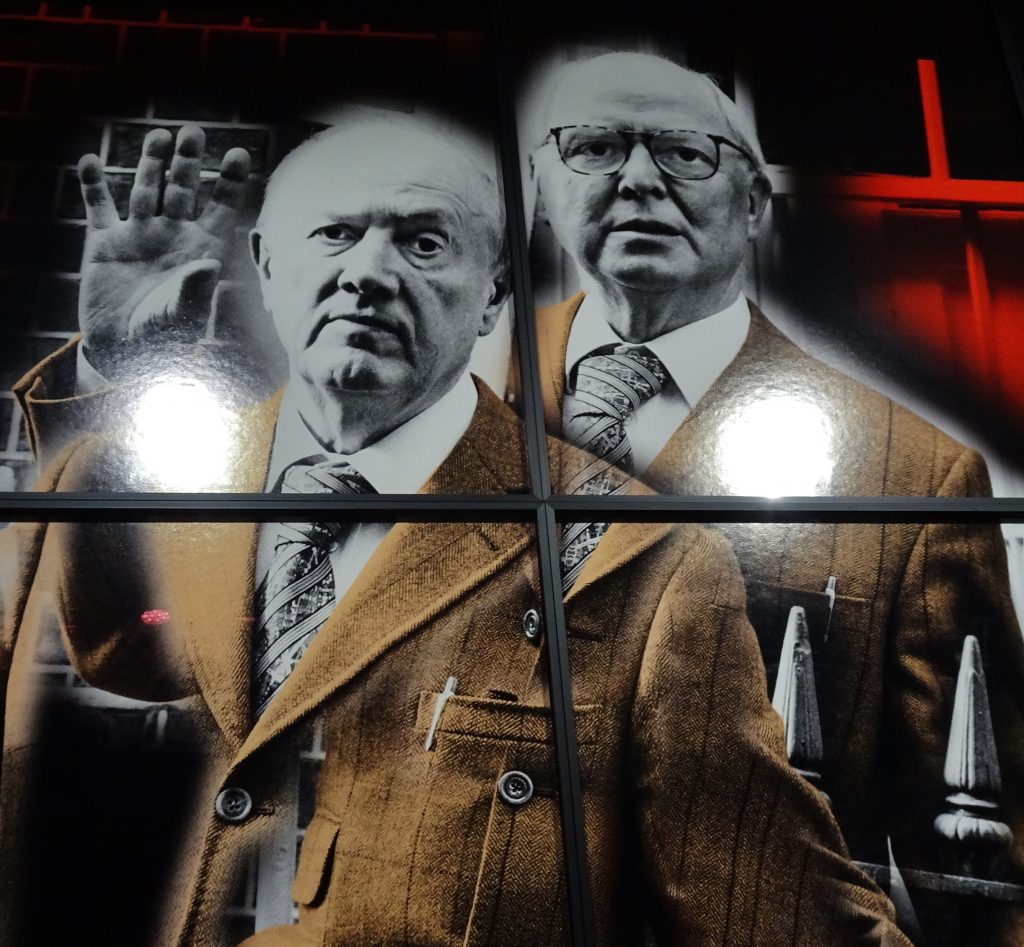 Along with the inevitable luxury car five giant, non-commercial works by Gilbert & George are dotted around the Fair as part of the overall design. Confusingly, two stands are also offering works by Gilbert & George for sale. This crass opportunism undermines the Fair’s integrity and blurrs the impact of its intriguing decor of Autumn leaves, sprouting flower-bulbs, subtle lighting and unusually discreet carpeting – whose motifs are reproduced on the front of a catalogue that has grown so repulsively heavy and unwieldy (600 pages, the last 80 devoted to advertising) that it is no longer fit for purpose.

As ever, a bevy of Moscow designers and collectors were jetted into BRAFA by the Fair’s Franco-Russian Liaison Officer Countess Limonad de Rochambeau. They could enjoy Russian material at a score of galleries. 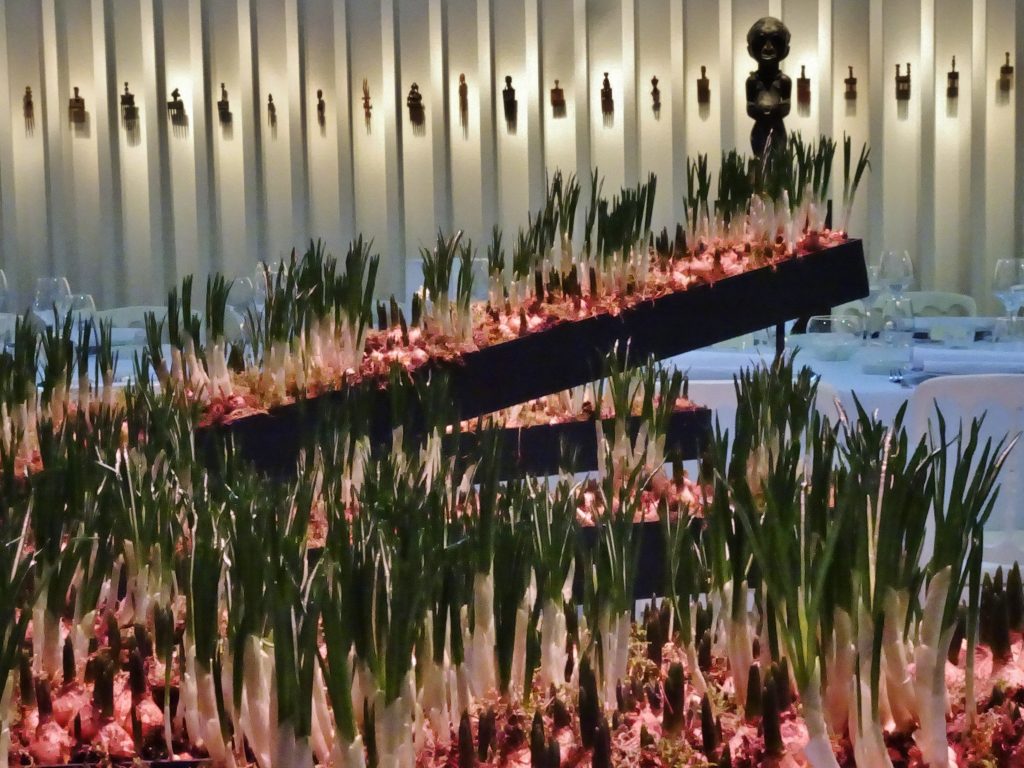 Tsarist memorabilia at Dario Ghio (Monaco) takes the form of two wedding gifts: a circular ivory miniature portrait of Tsar Paul I’s daughter Grand Duchess Maria Pavlovna(1786-1859), painted by Domenico Bossi to mark her marriage to the future Grand Duke of Saxony-Weimar in St Petersburgin 1804; and a square silver box with the arms of Empress Alexandra Feodorovna, gifted to her by CaptainK. Pegsky of the Imperial Artillery in 1894. 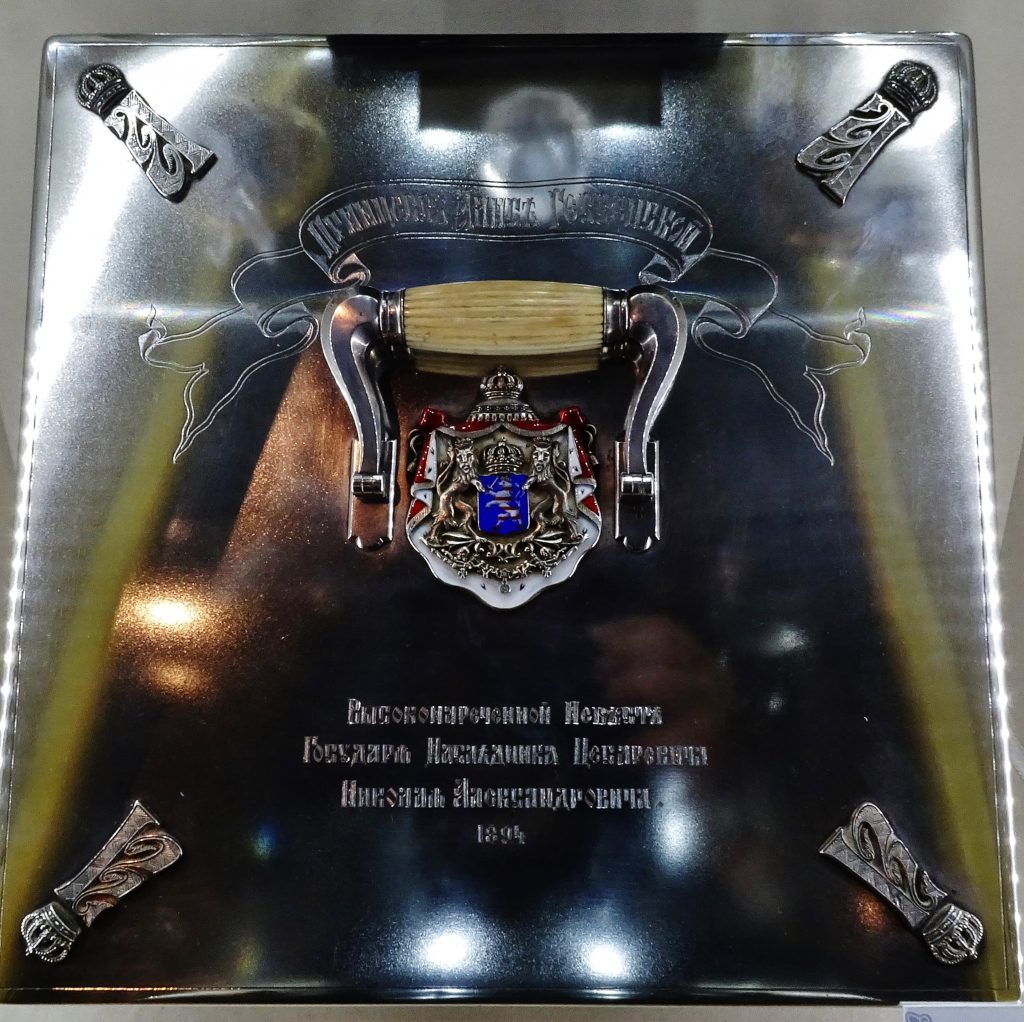 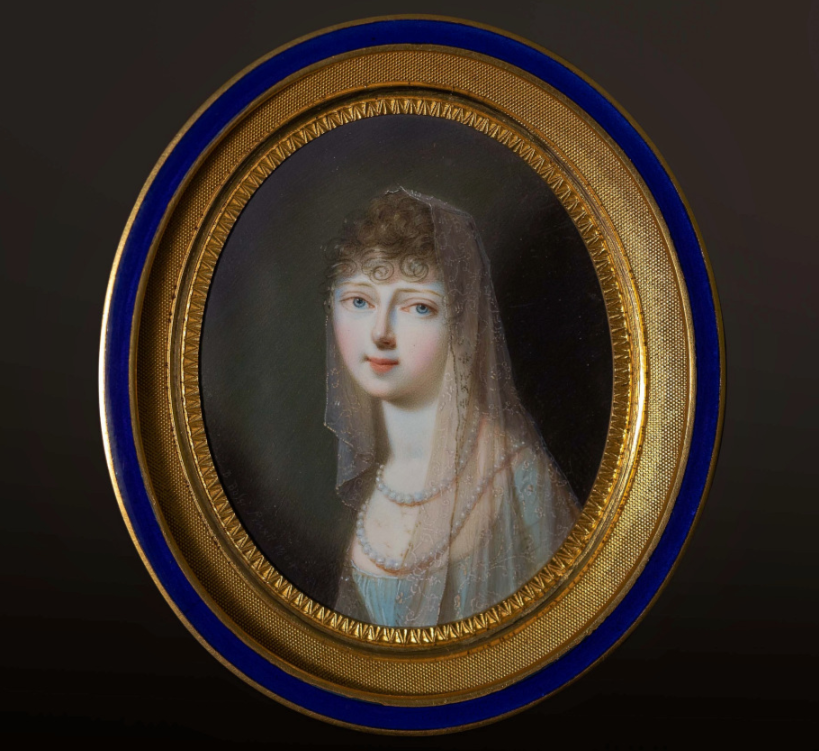 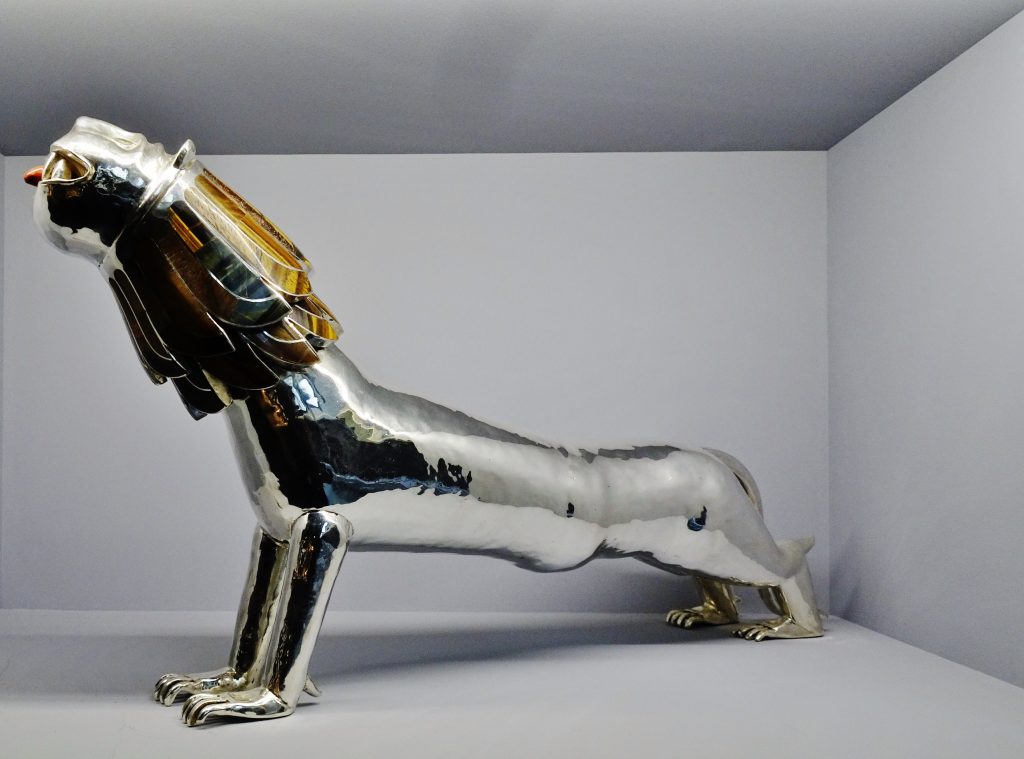 Brenske Gallery (Munich) have brought an extensive selection of (mainly Russian) icons – including an 18th century Monumental Virgin of Vladimir (below) – interspersed with a handful of modern paintings, one by Lanskoy. Gallery owner Stefan Brenske has written a lavishly illustrated bilingual (German/English) book on Icons and Modern Art (Schnell+Steiner, Regensburg 2005), but admits that icon collectors themselves are seldom fans of such ‘cross-fertilization.’ Even so, he finds plenty of buyers at BRAFA – he’s back for the seventh successive year – and says that, despite the dearth of icons in recent Russian auctions, the market is solid. ‘Auction houses maybe don’t have the same level of icon expertise they used to’ he explains. ‘Icons are a highly specialized field where dealers come into their own.’ 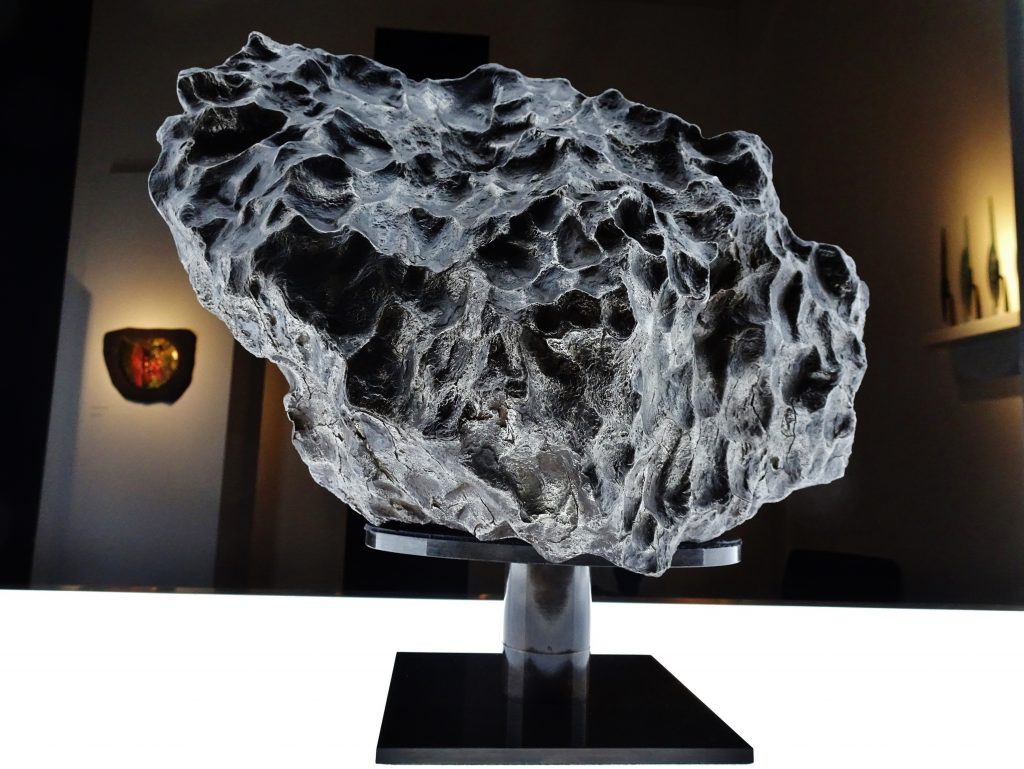 One Modern artist influenced by icon painting, feels Stefan Brenske, was Serge Poliakoff – visible at BRAFA just about everywhere you look: at Galerie des Modernes, Alexis Lartigues, La Présidence Boon (Knokke), Bailly (Geneva) and Berès (where he is upstaged by a majesticMartin Barré from 1956). The first stand Poliakoff fans should head for, though, is Whitford Fine Art (London) – to inspect a ripsnorting constellation of earlier works by Poliakoff’s stylistic mentor (and painterly superior) Joseph Lacasse. 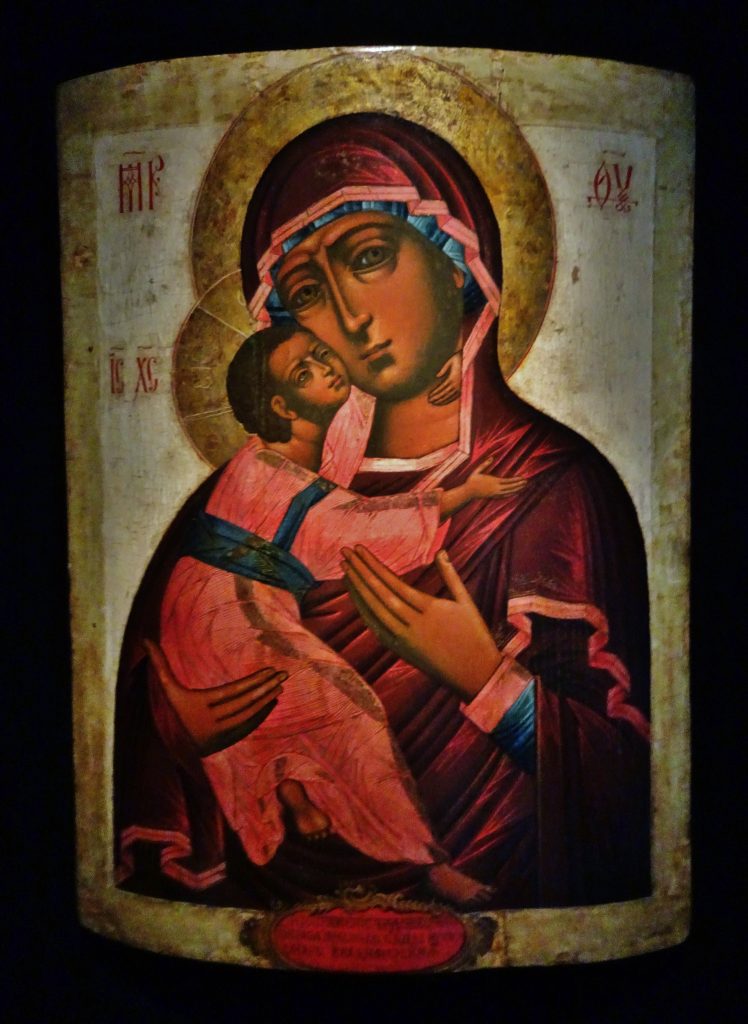 As well as their Poliakoff, Galerie des Modernesalso have a small 1925 Kandinsky drawing of a stylized Cricket Ball & Stumps(1925); a Survage Oiseau (1915); and a Zadkin gouache and watercolour Couple in the Room(1919). A Zadkin Reclining Nude is at Stern Pissarro (London) along with a Survage Still Life with Flowers (c.1918), priced at €250,000, and a  wall full of Biblical Chagalls, including Ahasuerus Dismissing Vashti(1956, below right) in gouache, ink and pencil (€160,000). Even more Chagalls lurk around the corner on a stand that, like many at BRAFA, is simply too large, with its better stock – including a couple of Sonia Delaunays – padded out with mediocre efforts by Pissarro’s latterday descendants. 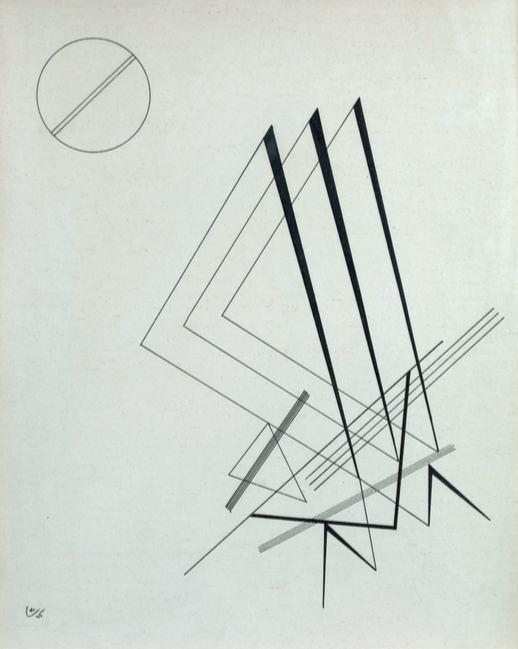 A 1957 Sonia Delaunay gouache and collage Rythme Coloré (1957) hangs at Brame-Lorenceau, while De Wit (Mechlin) have an Aubusson wool tapestry entitled Autumn (1972) based on her original design.

Among all the late Chagalls proliferating like lakeside mosquitoes are Flowers in the Window (1959) at Willow Gallery (London) and Le Coq Bleu (1960) at Tamenaga, complete with Eiffel Tower beneath crescent moon.

Serge Charchoune can be had at both Patrice Trigano and Berès, while two Jawlenskys (and a very curious Vlaminck) are available at Von Vertes (Zurich).

Alexis Bordesups the tone with an exquisite, quasi-abstract Leon Bakst 1910 gouache set design for Kashchey’s Palace in the 1910 Diaghilev production of Stravinsky’s Firebird.

Meanwhile, at Dominique Basteyns (Hatrival), a first edition of Moscou vu par Henri Cartier-Bressonplunges us back into the Soviet era where we began. The most poignant of its 163 images – all snapped in 1954 – shows two mischievous little girls in a playground walled in by the benevolent gazes of Mikoyan, Voroshilov, Khruschov, Malenkov, Lenin, Stalin and Molotov.

Those were the days.

PDF version of this report can be downloaded here