Shtager Gallery/Elephant & Castle Experimental Space announce the launch of Storming — total installation of the seminal Russian artist Alexander Shishkin-Hokusai (b. 1969, St. Petersburg, Russia) which will be shown in London for the first time.

The installation consists of 43 hand-painted plywood sculptures and is created especially for the London exhibition to follow the Frieze art fair and to mark the centenary of the Great October Revolution. The installation will be shown in several spaces, each time adapting to a new site and its surroundings.

The plot of the installation dramatises the storming of a building (in this case an industrial building in South London) by a group of plywood sculptures – soldiers, sailors, naked women and other participants in the “spectacle”, bordering on reality and imagination. The installation arranged to appear as a frame in a film or a shot/  theatrical mise-en-scène. Such a comparison is based not only of Russian but also of world cultural history.

The hybrid nature of Shishkin’s artistic practice is the outcome of his professional involvement as both,  a set designer for large theatrical productions, for which he uses his birth name Alexander Shushkin,  and contemporary artist under the name Shishkin-Hokusai. As the artist explains himself: “[a famous Russian painter Ivan] Shishkin painted nature. I have added to that the antagonist Shishkin-Hokusai. Hokusai prone to the abstract with some figurative plasticity. In this way, I encode two vectors of development for myself: Shishkin is an environmental component and Hokusai is the psycho-dramatic element referring to homo sapiens”. 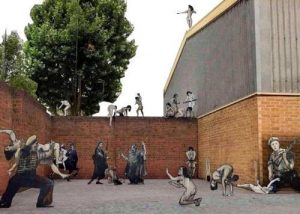 The main visual component of Shishkin-Hokusai’s artworks is graphical drawing. His first sculptures made of paper were exhibited as indoor groups and immediately drewattention of the professional community and art critics alike. Valentin Dyakonov compared the artist to William Kentridge, who also recurs to stage and theatrical themes, but with political overtones. However, Dyakonov views the works by Hokusai as magical realism, mixed with folklore and anecdote, which may also send us back to the works by members of the World of Art, such as Nikolai Sapunov and Stepan Sudeikin. Pavel Gerasimenko points out the beauty of the mechanics in Hokusai’s works and catches the glimpse of  the shadow of “the father of all contemporary art” Marcel Duchamp. Another Russian critic  Alexander Borovsky relates to Hokusai’s work as  “the breakthrough” in his research Contemporary Drawing (published by the State Russian Museum, St. Petersburg, 2013): “Alexander Shishkin-Hokusai is an outstanding theatre artist. All his kinetic paper figures are nothing else but graphics. Solid material would have transformed them into the category of “complete” things.” (The Drawing Changes It’s Skin. ART1. 25.03.2014).

Curator of the exhibition Denis Maximov comments on the project in the following way: Shishkin-Hokusai’s practice is as enticing from the technical perspective as in its conceptual essence. The images acquire sculptural shapes while remaining flat and  blurred, almost transgressing on the fundamental boundary between a sketch and an object.

The whole drama of the spectacle of the total installation revolves around the Elephant & Castle Experimental Space in the South of London, a seemingly insignificant location for re-staging grand spectacles that once changed the course of history. However the story of one of London’s “Newingtons” is very intriguing: it was transformed from a no-go-area into the experiment of urban utopian planning after the Second World War, and then went back to being one the most dangerous parts of the city after the experiment failed. At the moment,  it again lives through the controversial “storm” of the new Renaissance, brought about by the neoliberal capital,  arriving from elsewhere during the London real estate boom, which in itself can go bust again, as part of some catastrophic socio-economic consequences following Brexit “. 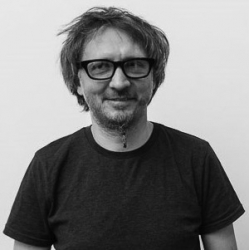 Alexander Shishkin-Hokusai (b. 1969, St. Petersburg, Russia) lives and works in St. Petersburg. He graduated from the Art and Design Faculty of the Leningrad State Institute of Theatre, Music, and Cinematography in 1995. He has been a member of the Russian Union of Artists since 1998 and, since 2010, he has been a member of the artistic collective PARAZIT. Total Installations include: Watching, Garage Triennale of Contemporary Art, 2017; Wish You Were Here, Youth Educational Center, State Hermitage Museum, St. Petersburg (2016); Practices of Growing Up, Street Art Museum, Saint Ptersburg; (2015–2016); Shooting Range, Busan Biennale of Contemporary Art, South Korea (2012). He has received numerous awards for theatre design, including the Golden Mask (2008, 2011, 2012), the Golden Soffit (2010), and the Stanislavsky Prize (2009). Shishkin-Hokusai was the laureate of Sergey Kurekhin Award in 2016, nominee for the prestigious INNOVATION PRIZE Award and 2011 nominee for the Kandinsky Prize (Project of the Year).

THE PROGRAMME OF THE OPENING:

This Storm is What We Call Progress