This year at Start Art Fair on 21-25 October 2020 Shtager Gallery represents the leading Russian contemporary artists Alexander Shishkin-Hokusai and Marina Alexeeva with their unique digital series of artworks and installations. The stand debutant and a tribute to the traditional canvas is Katya Granova, an artist with a large-scale painting dedicated to beloved Russian dramatic actress Vera Komissarzhevskaya. In addition, Japanese artist Yusuke Akamatsu, who uses his own fingers as his brush and his iPhone as his canvas, will introduce his new series of diptychs related to Pablo Picasso’s Guernica. 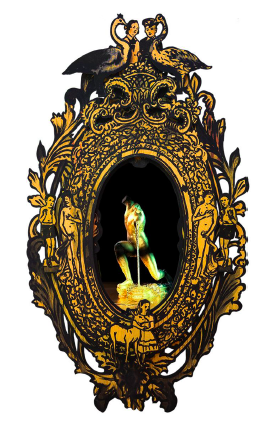 Alexander Shishkin Hokusai is a seminal Russian interdisciplinary artist, recently represented Russia at the 58th Venice Biennale. The oppositional nature of anthropology is a recurring subject in the artist’s work: the on-going series of plywood video installations are a symbolic and bold representation of normalised ontological brutality of dialectics in being. His critical interpretation of dichotomy has unique aesthetics: evoking the theme of agonistic politics and cultural destruction directly, albeit in a disarmingly soft and poetic way. Fountain series by Shishkin-Hokusai are simple, vivid and therefore impactful forms of engaging with wider audiences. They are noticeable, catchy, accessible and present multiple connotations. Aesthetically his work is closely connected to theatrical stage design: he materialises the call of Brecht to bring theatrical masks outside and therefore de-mask the theatralised world of politics. We will be holding the premiere of a video installation by Alexander Shishkin-Hokusai “Gold Bleeding Fountain” series. It is a bewitching and mesmerising video inserted in a deliberately contrasting and simple display made of plain plywood. 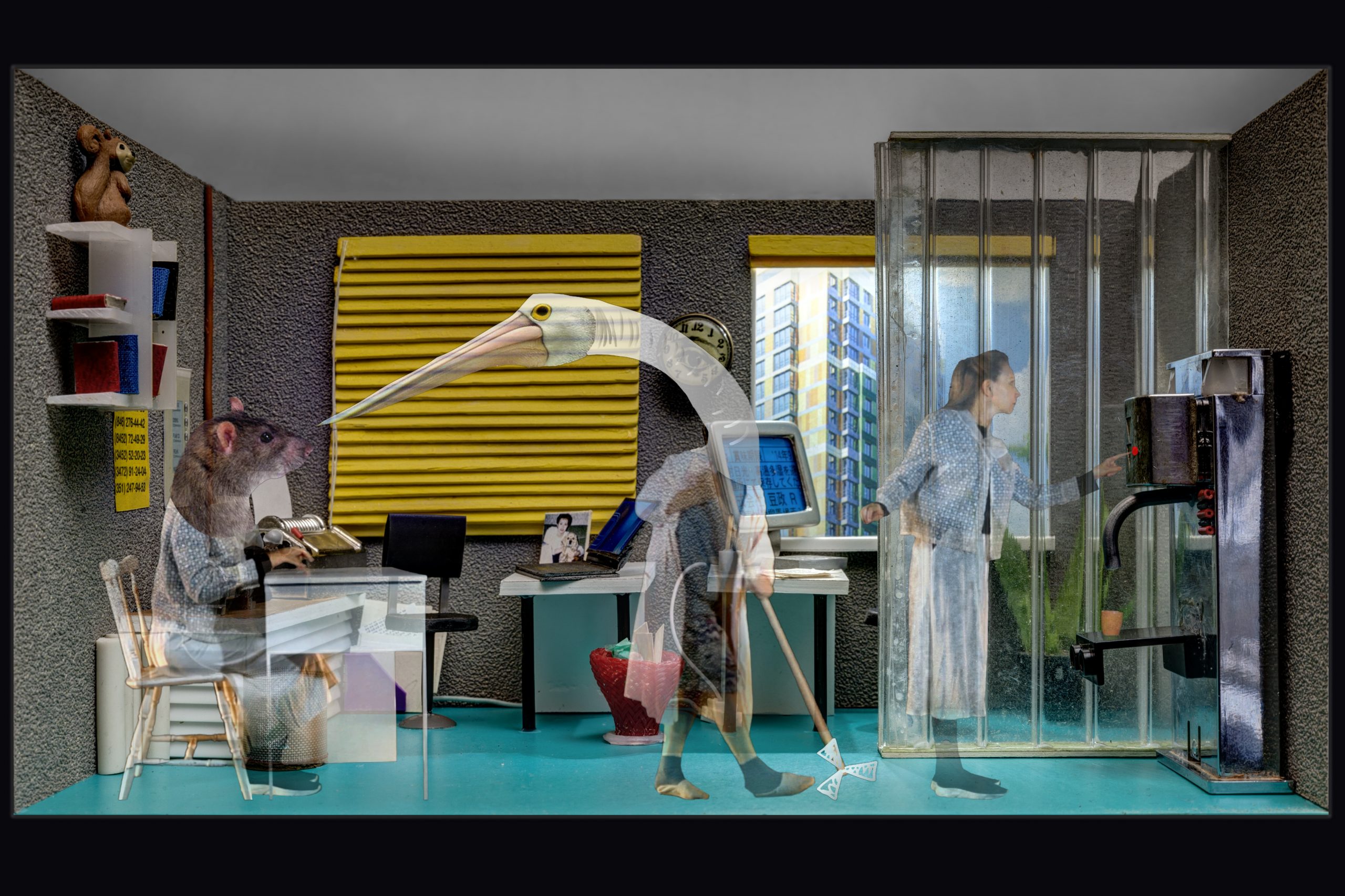 Marina Alexeeva is one of the most significant media artists in Russia. She has been working in the medium of micro-installations called “Life Boxes” since 1990s. Finally animation was incorporated and her work began to develop as the films, created by the artist and projected inside the boxes. The art of Marina Alekseeva belongs to the rich tradition of maquette creation that has been known in Europe since the 17th century: as with the Doll House of Petronella Oortman from the Rijksmuseum, Amsterdam. This tradition existed in the 20th century – Carey Walter Stettheimer doll house with the works of Marcel Duchamp (The Stettheimer Doll House) at the Museum of the City of New York is an example. Unexpectedly it received a powerful development in contemporary art, and has turned from a home and amateur occupation into an actual artistic statement about the nature of authority, with an emphasis on universal control and observation. Should we be surprised then that these ingenious “Liveboxes” are enjoyed by dozens of viewers all over the world, from Sir Elton John to old friends of the artist, who love to gaze into their boxes from time to time? There is a certain desire to occasionally check whether something new has appeared there, or to glance at the details of a magically organized life. At the Start Art Fair 2020 Marina will show a series of five light boxes specifically designed for the UK in 2019, which describe everyday situations in an absurd manner. Many works are devoted to the impact of disciplinary practices on people, such as a school, gallery, office or even the ballet theatre, the usual spaces of human habitation. For the first time, the artist turns to acutely political topics of today, from current newspaper headlines, such as sexual harassment or Brexit. 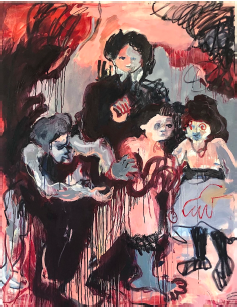 Katya Granova: ‘My approach to painting can be seen as a speculative archaeology of the pre-existing image or an alchemical effort to bring a dead image to life with my body and its dissecting gestures – just as a surgery does. As any collective past operates just like a closed country, open to any speculative reading from the outside, my practice uses the same method as that of a child drawing over pictures in magazines, bringing his/her presence to it, but not pretending to fake it into something else or serve some ideology. This desire to intrude the body of the past with my own corporeal presence brings me to a bigger scale, where painting becomes a physical act or even a dancing interaction between myself, the photograph, brush marks, a viewer’s gaze, and the past I’m dealing with.’ .

Yusuke Akamatsu was born on October 21, 1967 in the city of Ibaraki, in Osaka. He tried his hand at being a comedian, a director, a screenwriter, a novelist, an event entertainer. In 1995, he changed gears and became a filmmaker, initially influenced by David Lynch, Wong Kar-wai, Kon Ichikawa, and Takeshi Kitano. Yusuke continues to fuse film and photography to create experimental films. Since 1997, he has travelled the world (Korea, Hong Kong, Vietnam, Thailand, Singapore, Taiwan, Los Angeles, America, and London, England), creating works on the theme of human barrenness.

Akamatsu’s prior work with the moving images taught him to combine two seemingly incompatible modes of working: intense, quick decision-making and contemplative, attentive gaze into the essence of the phenomena he observes. Like a contemporary impressionist, he opted to innovate with the materials he uses to create paintings instead of following the well-beaten paths. Akamatsu works in the technique of collage, assemblage and montage at the same time – blending the media and disciplines to produce his unique poetic works. Akamatsu’s take on this heavy subject is performed with thoughtful contemplation rather than with the political agenda. Art is not the space to do politics – but a space to think about it, ask questions about it, restart the gears of reflection. Yusuke Akamatsu oeuvre, distinctly presented in his new series, charts that space of thinking for the viewer and provides an entry point to our human complexity.