Sergey Sapozhnikov, a photographer whose solo exhibition has recently opened at the New Tretyakov Gallery, started out as a graffiti artist. He may have swapped the spray-can for the camera some time ago, but its influence is still tangible in his work; his prints consist of dark backdrops accented with high-voltage shots of synthetic colour, pigments which could only come from polymers: acid yellow, lime green, fuchsia pink. Urban decay continues to be the underlying theme uniting his work, although this is not immediately obvious in his photographs, which are zoomed, cropped, and blurred to render their content unfamiliar. Images such as Untitled (2011) from Sapozhnikov’s 2012 series Failed Views shows a seemingly abstract assemblage of household debris and foliage shifting in and out of focus. “I’m interested in creating visuals in which the viewer can’t immediately work out what’s going on. One has to peer into the picture, examine it closely, take part in the work itself”, Sapozhnikov explains. 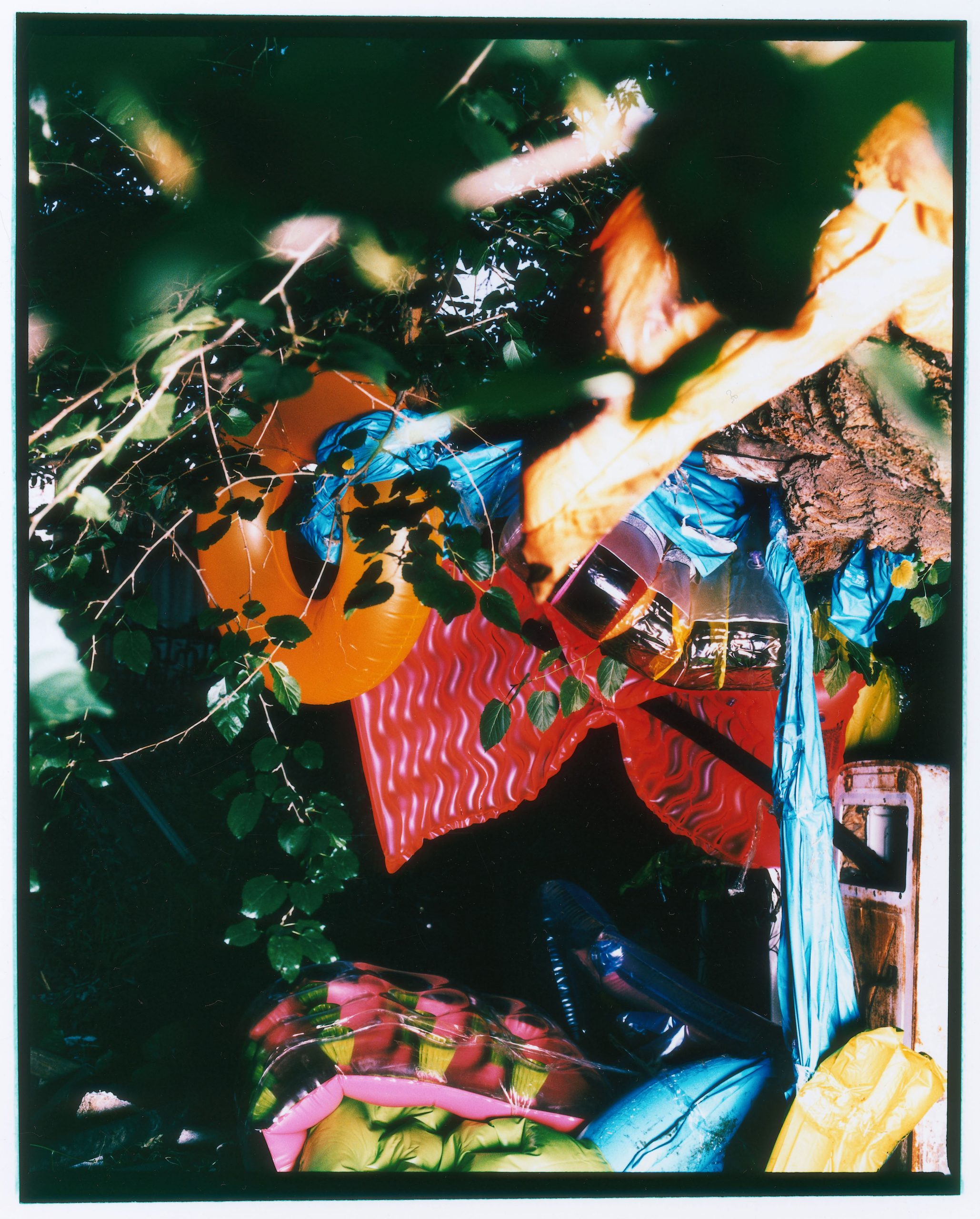 Sapozhnikov’s works indeed demand active engagement for the viewer. At first his images – all of which are untitled – seem to be set in unidentified locations. Instead of specific place- markers, we recognise an accumulation of anonymous, industrial signifiers: building beams, dilapidated structures, crumbling bricks, over-spillling landfill. Yet, there are clues embedded in the exhibition which alert us to the fact that these seemingly-anonymous sites are actually ones of biographical significance for the artist. Sapozhnikov hails from Rostov-on-Don, where he lives and works, and several of the photographic series on display here are shot in his home region. “For me, Rostov is particularly interesting because it’s a post-war space. The majority of the buildings were reconstructed after the Second World War”, Sapozhnikov explains. 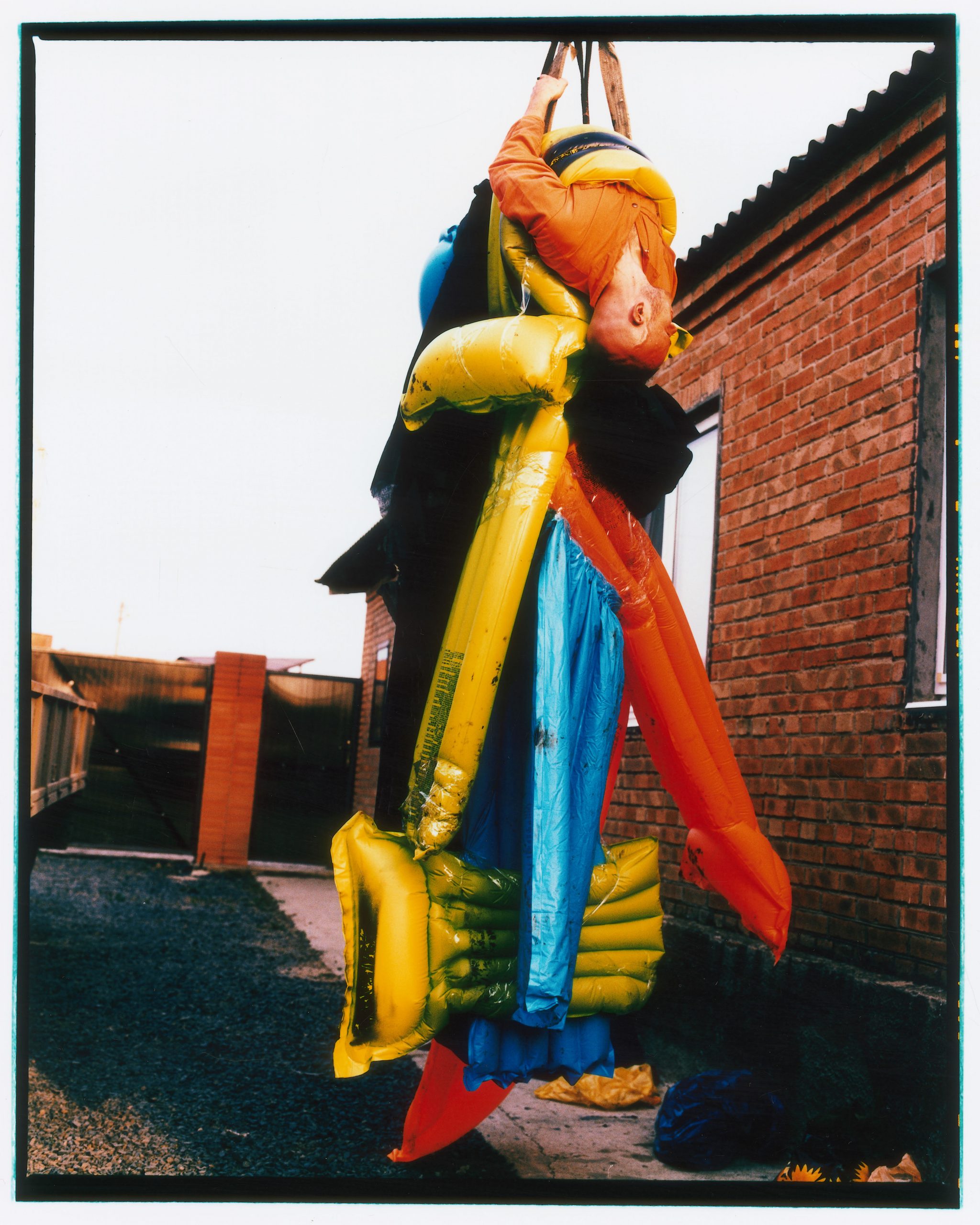 This area draws him primarily “for how it displays the resourcefulness of people, how they reconstruct [their habitat]”. Resourcefulness and reconstruction are, indeed, just what the artist himself displays in his art. Sapozhnikov’s prints have a documentary function, a permanent record of his transitory interventions into dilapidated, post-industrial spaces. In his series Wonderful Day (2018), he created large-scale sculptures out of coloured plastic objects, situated amongst the ramshackle infrastructure of rundown buildings. The effect, of objects including inflatable mattresses, lilos and swimming rings hanging amongst derelict wooden beams, is absurdist and almost post-apocalyptic, suggesting post-human spaces and their (in)habitability. This theme continues in Dance (2018), in which Sapozhnikov collaborated with professional dancers to stage a performance in a disused urban space. The result was a series of photographs of twisted and contorted human bodies, entangled within contained spaces which both seem on the brink of breakdown. 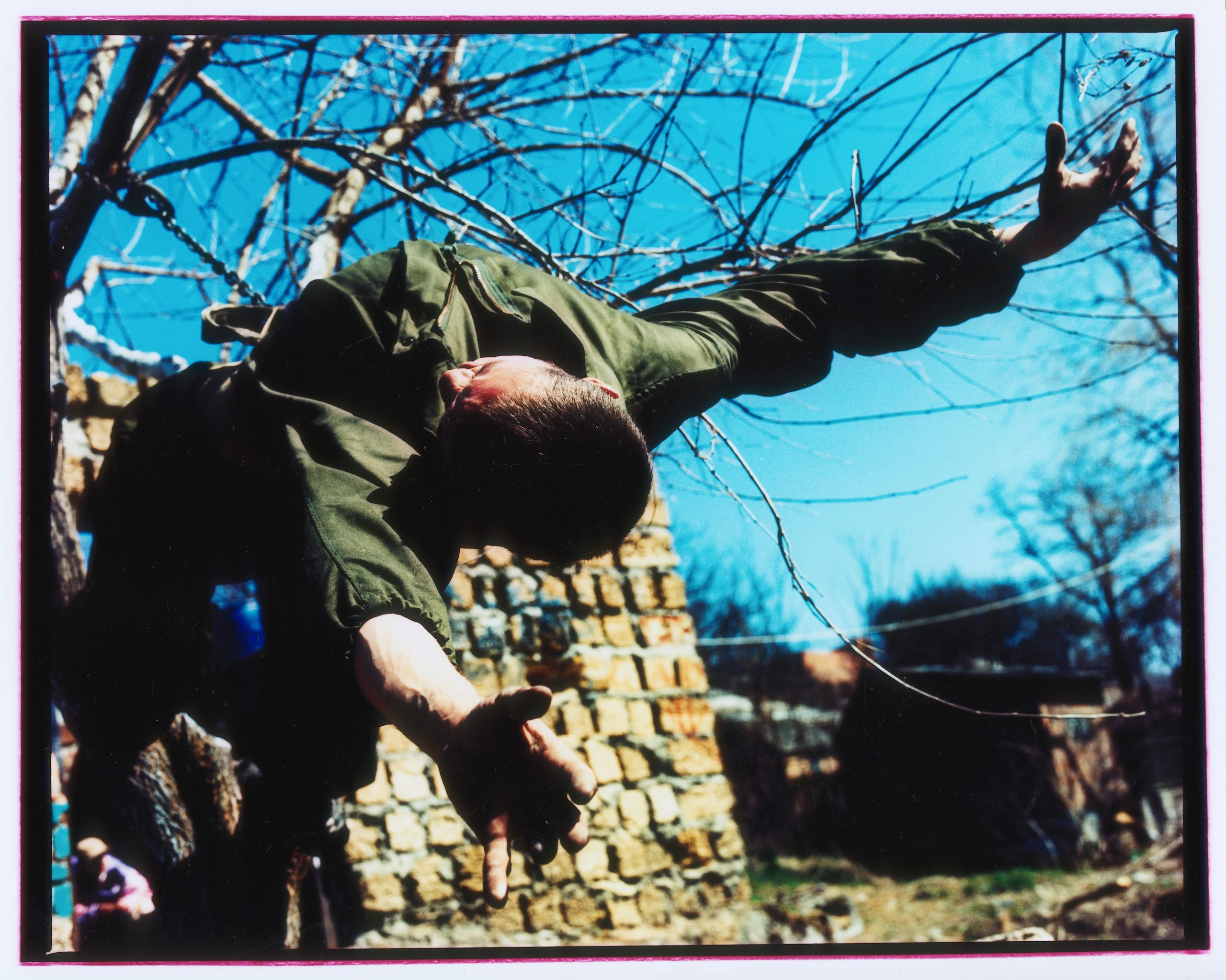 “It’s very difficult to see what we’re looking at here because the subjects are deliberately nonsensical” Sapozhnikov observes of his work, much of which, indeed, rests on the cusp of abstraction. The high-contrast light and shadow, accented with intensely saturated fluorescent colours which make up his photographic palette means that his final prints have an abstract expressionist quality; a series of scattered shapes which slowly resolve themselves into recognisable objects as one draws closer. The effect is not dissimilar to one of colour-field painting, a comparison which the artist welcomes; “painting began to interest me more and more [as I developed my photographic practice].” The Pollock-esque effect of his work is heightened by their large-format, Sapozhnikov works with huge oversized prints which take up multiple sheets of paper, stitched together, and pasted straight onto the wall. 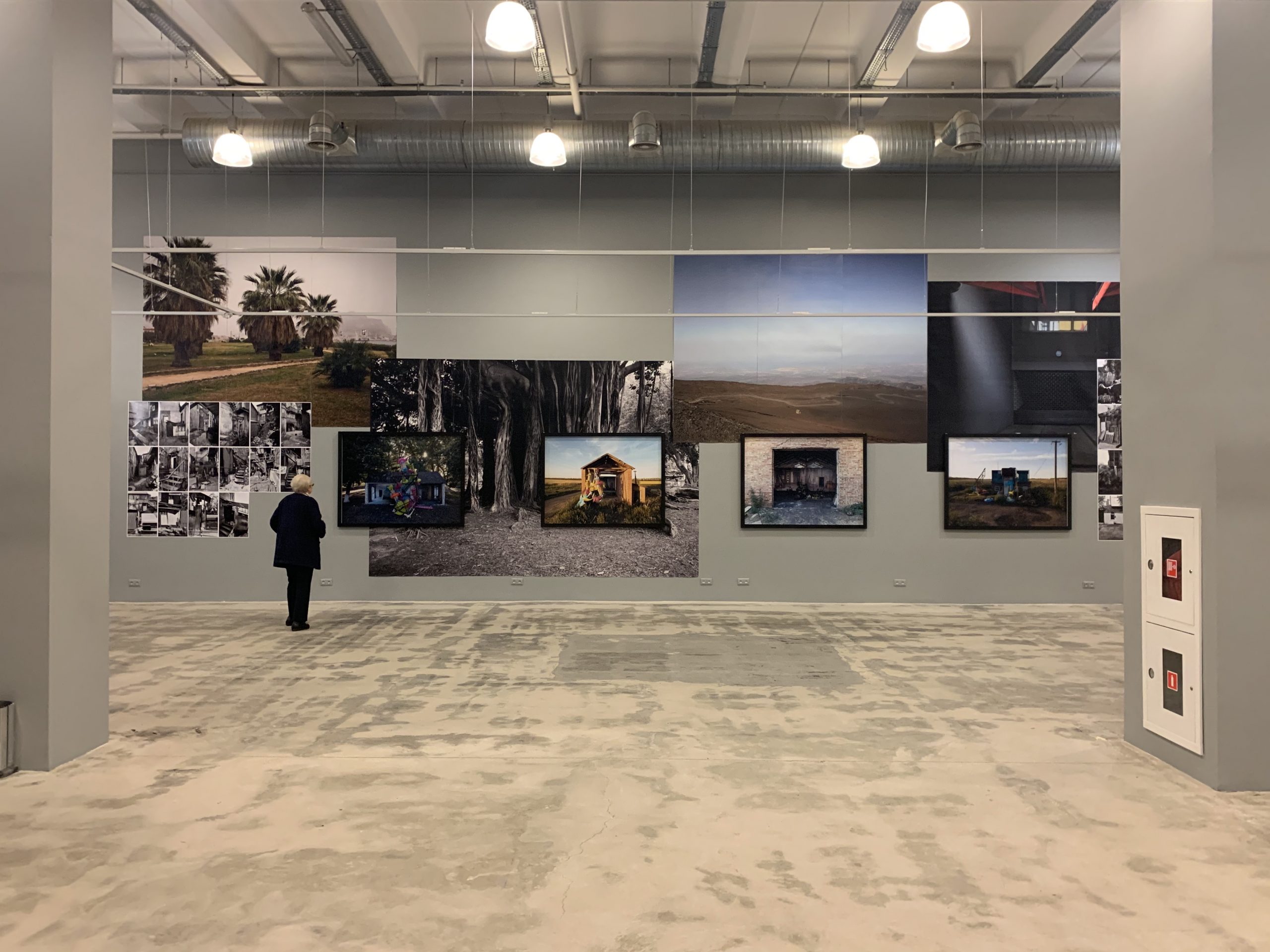 The choice to mount several of Sapozhnikov’s works as posters further heightens the comparison to street art. The basement room in which this show is installed has overlapping images jostling for wall-space in an apparently disordered display which presents itself as a chaos of colour, defying logic or order. There is, however, a method behind the madness; the photographs are in fact hung in a chronological sequence, presenting a linear career retrospective of the numerous projects which Sapozhnikov has worked on since 2006. 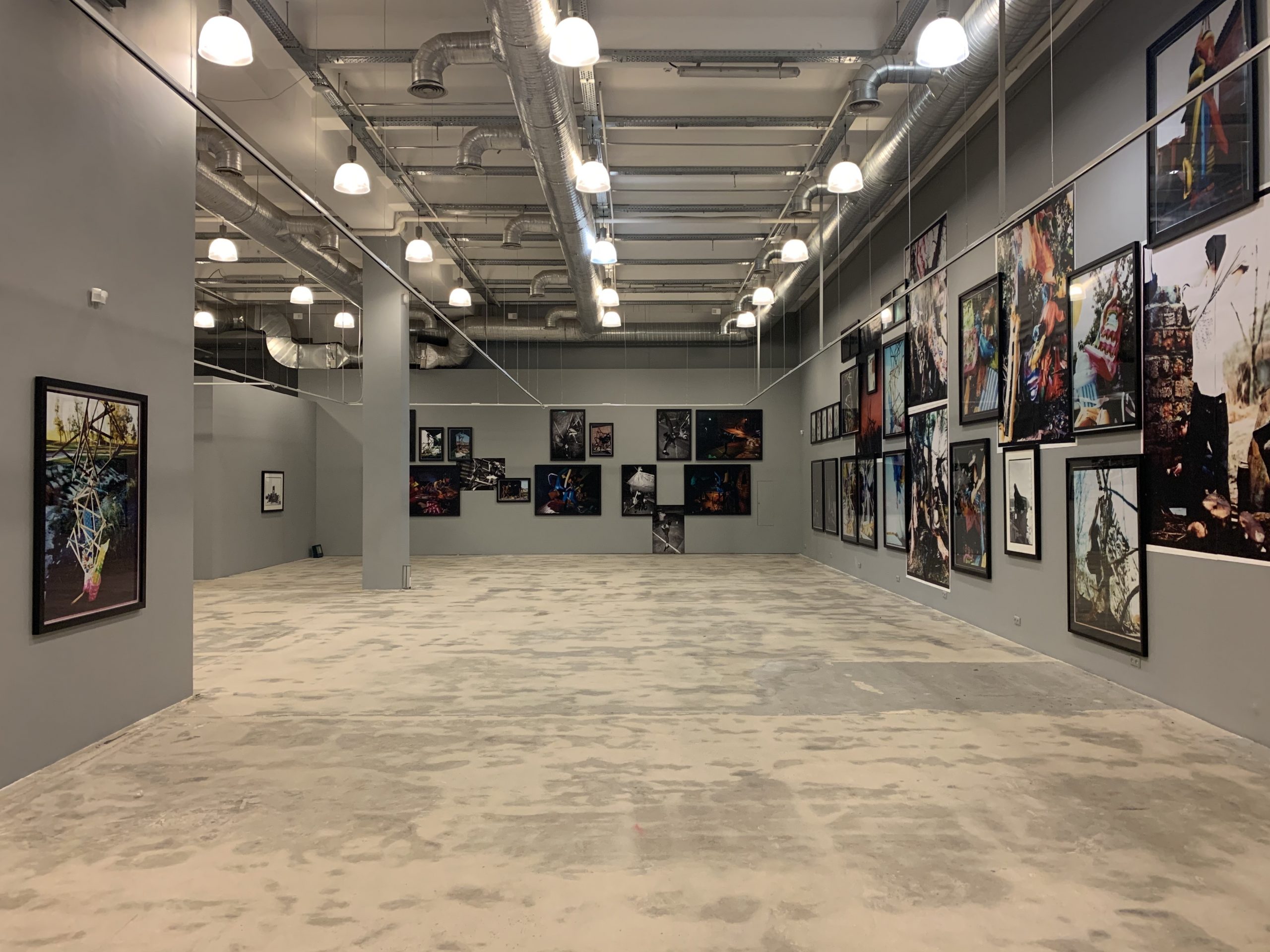 The curatorial decision to mask this underlying order through a disorientating hang of mismatched sizes and stacked photographs, in itself, echoes the apparently haphazard constructions of Sapozhnikov’s work itself; the accumulation and layering of formless masses which make up the content of his photographs is mirrored in their hang. Ultimately, these are images of instability, and both the artist and curator collaborate in this exhibition to invert the impression of a system in disarray and exploit the tension of art on the cusp of collapse.

Other Articles By Kamila Kocialkowska