SCREAMS OF TIMES PAST – ALFRED KUBIN AT THE RICHARD NAGY GALLERY

Lao Tzu wrote that, “knowing others is wisdom. Knowing the self is enlightenment. Mastering others requires force. Mastering the self requires strength”. Alfred Kubin, “my conceptions do not follow any aesthetic canon, nor are they caricatures, they escape all formulations, but I know that certain creative forces drive me irresistibly”.

If one examines the premise that the exhibition of drawings from 1898-1906 by Kubin at the Richard Nagy Gallery in Bond Street is a portrayal of the stream of conscious of an individual, what conclusions can be reached as to the inner workings, thinking, raison d’etre of an artist? What, if such a thing can be quantified, is his level of self-knowledge? Is he enlightened?

It would take a myopic, myxomatosis-afflicted rabbit not to see that Alfred Kubin Esq. must have been one messed up sonovabitch but, and herein lies the importance of this small but staggering exhibition, a more honest self-examination is difficult to imagine. If the goal of art is to thyself be true then Kubin dishes out a 5-0 drubbing.

Kubin does not seek to ‘master himself’, quite the opposite. His enlightenment is the portrayal of self in as visceral, erotically-repellent and violent a manner as possible. This is open-chested, screaming, painful art, this is imagery that stays in the mind. This is art going beyond the realms of honesty and into the realms of phantasmagoria. This is powerful, thumped in the solar plexus during a night out, art

Of course there are precedents. Bosch, Goya but with Kubin between these dates there is no let up, there is no ‘up’ side, no garden of earthly delights, no parasol. ‘Torture’, a drawing with an tribesman impaled on a huge spear whilst being roasted is pure ‘Horrors of War’ by Goya but Kubin’s journey between 1896 and 1906 is a never-ending stamp through darkness, drudgery, ruin, pestilence, war, famine, the folly of existence and especially relationships, both sexual and familial. It feels prophetic – empires totter and fall.

On occasions, the drawings are more illustrations than works of art, but provide excellent contrast to the horrors hanging nearby. The more formulaic ‘Executioner’ and ‘Ghostly Dancer’ from 1899-1900 – hang next to ‘Violation of a Moravian Farmer’, a female violated while strapped to a St Peter Cross. 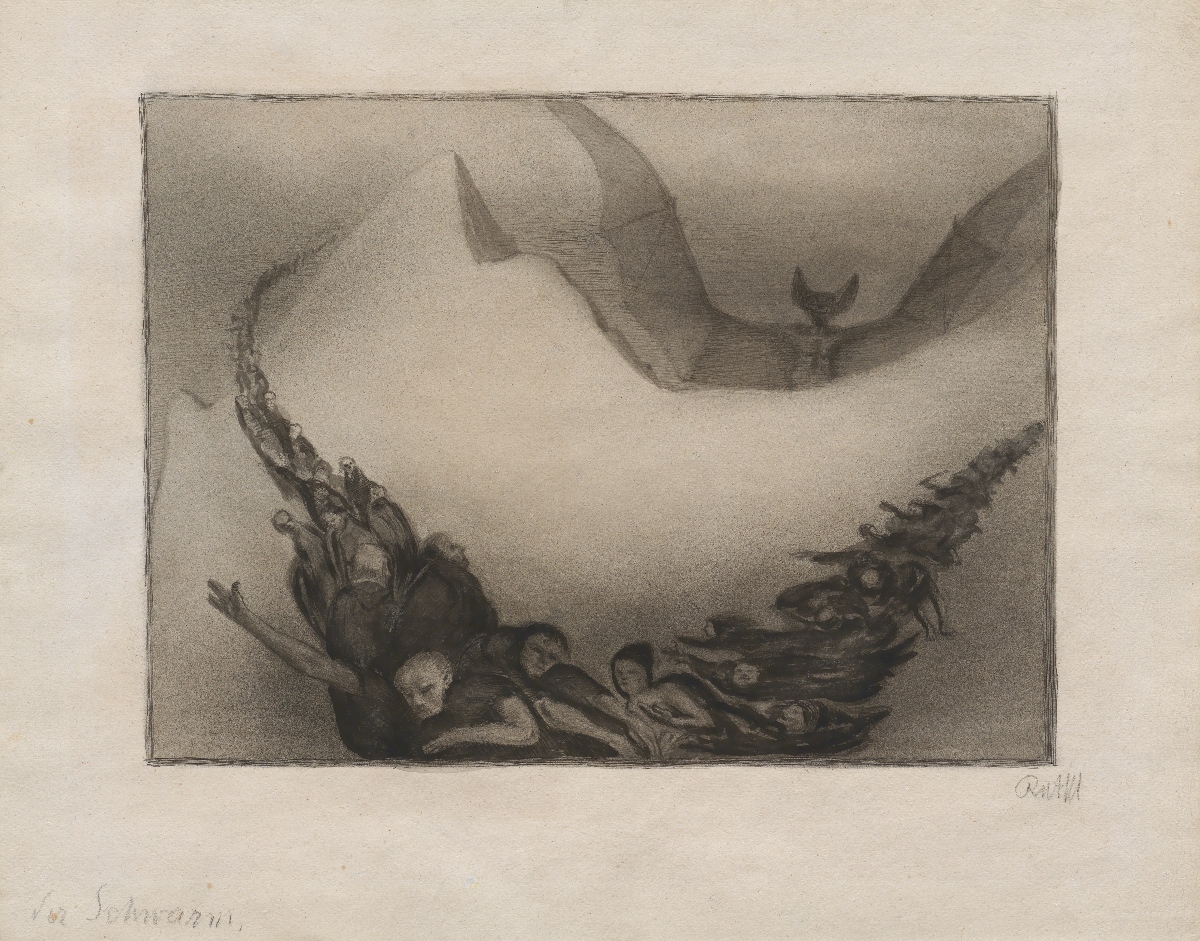 There is nothing ambiguous about a middle-aged woman, bare-breasted, hanging from a chandelier, ‘The Dead’ but ‘The Wind’, ‘Night Descends, Day Flees’ and, especially, ‘The Swarm’ work on their own as outstanding works of art. In the ‘Swarm’ two semi-circles reflect one another, the flying bat, the fleeing crowd. The image is sophisticated, the construction simple. Whilst the images come from Goya, their interpretation is quite unique.

The historical perspective here, straight laced, fin-de-siecle Munich with an emerging and vibrant intellectual scene is interesting, the personal perspective critical. The over-protective mother dying when Kubin was ten, a year later he experienced sexual contact with an older woman. Within a year of this his authoritarian father had married Kubin’s aunt who died in childbirth soon after. The death of his great love Emmy in 1903, his wife a morphine addict. Such a series of events could lead anyone into the Dark Side but few can so openly, so creatively and with such brutal imagination portray it?

The scope of the exhibition featuring, for the first time, loans to a private gallery from the Albertina is impressive. The high quality and factual catalogue speaks volumes for their professionalism and far-sightedness – this is an important exhibition.

As the exhibition ends this week, I can only urge readers to purchase the first class catalogue that accompanies this gore fest from the gallery post haste. If not, head to 22 Old Bond Street by Friday and, please, don’t wear Chanel.