“The English are better at building railways and cooking chops than they are at art” – a letter from Vasily Polenov to his family from London, 22 May/3 June 1875. Join art historian Rosalind Blakesley for an exploration of a century of artistic dialogue from the time of Catherine the Great.

British artists have long attracted attention from Russia’s collectors, commentators, and connoisseurs. Imperial and aristocratic collections acquired British art from the 1770s, and Catherine the Great referred to Hogarth’s print The Enraged Musician when she was bemoaning her excessive workload. British painters enjoyed their fair share of adventures in Russia, while Russian artists found much both to admire and to decry in their British counterparts. In this lecture, Rosalind Blakesley traces the highs and lows of this relationship, from the enthusiastic encounters of the late eighteenth century to robust engagement with Realist and Pre-Raphaelite practice as the imperial period drew to a close.

A historian of Russian and European art from the 18th to the early 20th century, Rosalind Polly Blakesley was educated at the universities of Cambridge, Oxford and Moscow, and is now Professor of Russian and European Art at the University of Cambridge and a Fellow of Pembroke College, Cambridge. She is also the co-founder of the Cambridge Courtauld Russian Art Centre, a leading research centre dedicated to Russian and Soviet art, through which she has run a number of collaborative projects with museums, galleries and universities abroad.

Blakesley is a Syndic of the Fitzwilliam Museum, and has curated and contributed to the catalogues of exhibitions in London, Cambridge, Moscow, Darmstadt and Washington DC. She has also served on the boards of the Hamilton Kerr Institute and Kettle’s Yard and as a Trustee of the National Portrait Gallery, London, where she curated the exhibition Russia and the Arts and advised on its partner exhibition at the State Tretyakov Gallery, Moscow in 2016. For this collaboration, together with her book The Russian Canvas, Blakesley was awarded the Pushkin Medal of the Russian Federation in recognition of her services to Anglo-Russian relations and the study of Russian art. The Russian Canvas was awarded the 2017 Pushkin House Book Prize. 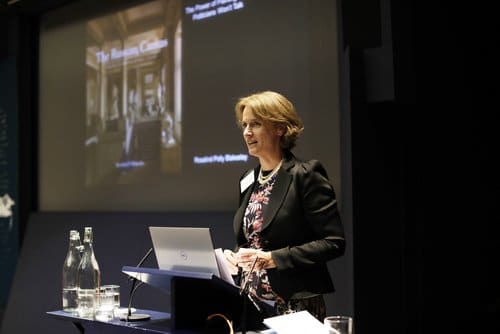 Blakesley has received research funding from the Arts and Humanities Research Council, British Academy, Leverhulme Trust, In Artibus Foundation and Association of Art Historians, among others, and was a Likhachev Foundation Cultural Fellow in St Petersburg in 2014. Media work includes Front Row and World at One on BBC Radio 4 as well as interviews for BBC Radio 3, Sky News, the Australian Broadcasting Corporation, Russian national television channels, Voice of Russia and the Russian Service of the BBC.