Roseberys final Fine & Decorative auction of the year will take place on Wednesday 25 November, starting at 10am. The sale comprises of five-hundred and thirty-two lots in total, ranging from works of art, and silver to furniture from around the globe. You may view the fully illustrated catalogue here

A prominent feature throughout the sale is silver from Russia. The Russian silver on offer is broad and varied, spanning several centuries and in a range of ornate motifs and designs. Russian silver is highly collectible and its popularity is ever on the rise, with avid aficionados around the world.

Lot 161 is a wonderful early twentieth century Russian silver and cloisonné enamel kovsh. The Kovsh is a traditional drinking vessel or ladle from Russia. It is typically oval-shaped like a boat with a single handle and may be shaped like a water bird or a Norse longship. Originally the Kovsh was made from wood and used to serve and drink mead, with specimens excavated from as early as the tenth century. This particular kovsh is by Vasily Ashmarin and hails from Moscow, c.1908-1917. The body is enamelled with varicoloured floral, spiral and foliate motifs. It is expected to make £1,000- £2,000 at Roseberys auction. 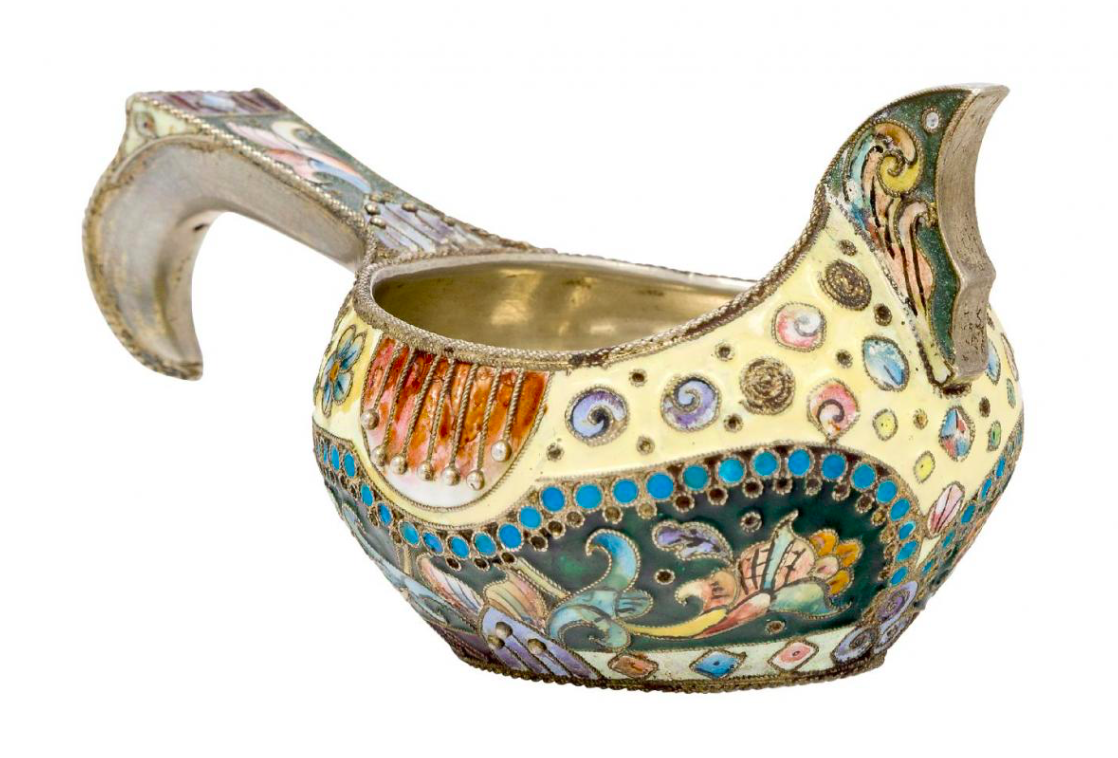 Another highlight are two wonderful 19th century Russian silver salt thrones, one Moscow, c.1866, assay master Victor Savinkov, maker’s mark for Alexei Osipov, the second throne Moscow, c.1869, assay master A. Svechin, maker Alexander Mukhin. Both are of traditional form, with the hinged seats engraved with the words ‘без соли, без хлеба половина обеда, meaning lunch without salt and bread is only half a meal. Salt occupies an important place in Russian culture and as such, dipping bread in salt at weddings remains a tradition practiced by many couples today. In bygone times, visitors were often welcomed into a house with a piece of bread and salt, which symbolised health and prosperity. In ancient and Medieval Russia, salt was an expensive commodity and was saved for special occasions, which makes these thrones even more special. The backs of both thrones are pierced with decoration and the underside of the lid of the Mukhin throne are engraved with a cockerel. These highly decorative salt thrones are estimated to make £500- £800 at Roseberys Fine & Decorative auction. 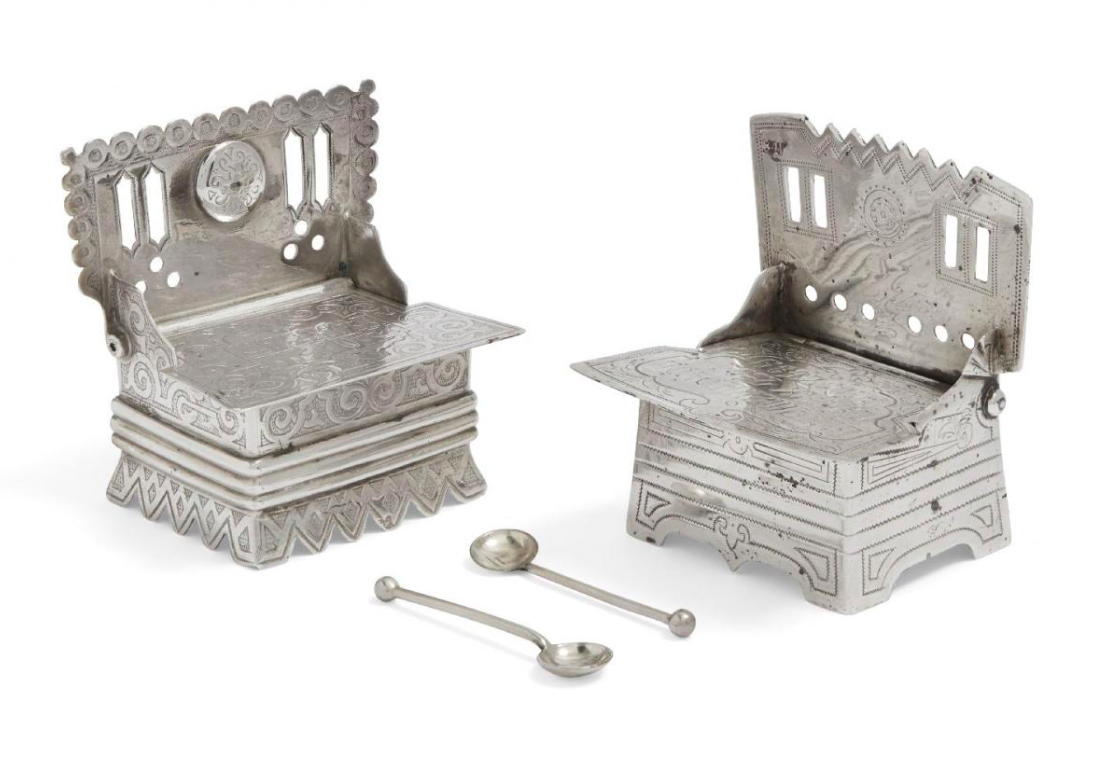 Entered in to auction at £200- £300 is a Russian silver enamelled beaker, (probably) Aleksander Vladislavovich Skovronsky, Moscow, c.1896. The beaker has blue enamelling and an intricate scrolling design throughout. It comes with a similar, enamelled dish, with a beautiful polychrome enamelled design. 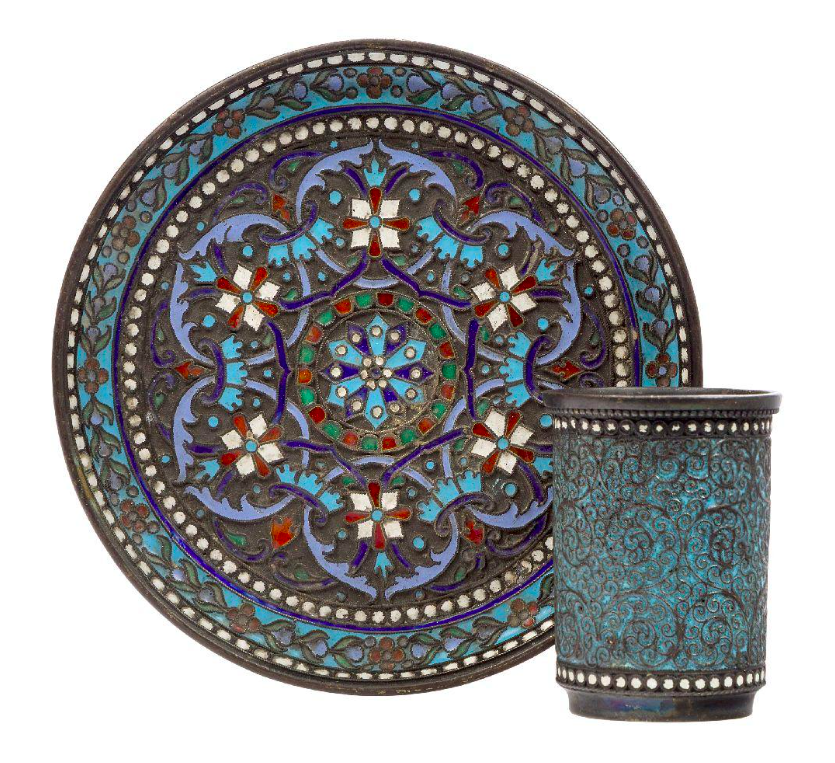 An 18th century Russian silver beaker, c.1735, comes with a Cyrillic maker’s mark GMK. The body is engraved with cartouches depicting a castle and river scenes to foliate garland spacers. This beaker was made after Peter the Great declared himself Emperor (1721). During this era the influence of Western silver began to assert itself and Russian silversmiths began to explore Western forms such as the tankard, the salver, and other more common forms. This beaker comes with an estimate of £200- £300 at auction. 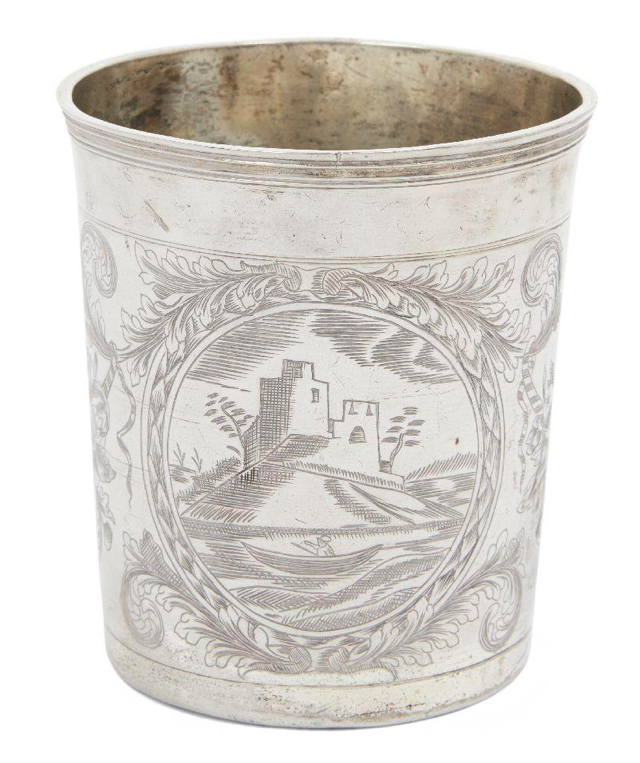 Ending the highlights within the sale is lot 163, a Russian silver and champlevé enamel ‘izba’ design box, created in 1892 in Moscow by Gustav Klingert, assay master Lev Oleks. Raised on four square feet, the lid and sides are cast to resemble geometric patterns of woven birch, and the lid is decorated in traditional izba style and enamelled thumbpiece. Estimated to make between £1,500 – £2,500, this is a lovely trinket box, beautifully decorated with enamel and designed to resemble a traditional Russian rural dwelling. The maker, Gustav Klingert, was born in Germany but began his career working as a master for Fabergé. In 1865 he founded his own factory in Moscow and it was later described as one of the most important firms in Russia.

No public bidding allowed for this auction – live online only. We are pleased to facilitate condition reports, extra images and video viewing. Please contact worksofart@roseberys.co.uk for more information.