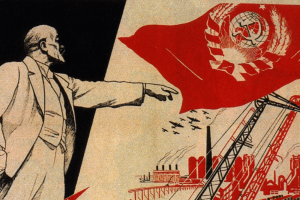 Russia experienced a period of cultural prosperity during the three decades leading up to 1917. Poetry went through what was called the ‘Silver age’ and with it music, dance and visual arts also flourished. Many of its strongest advocates had developed strong links in Europe, particularly France. With the arrival of the Bolshevik’s many of these close ties were severed and the cultural scene shifted nearly as fast as the political one. The revolution brought about a blank artistic canvas in Russia, one that the party re-built according to a new set of rules and values.

With each new change in power came a new challenge for the Russian composers of the time, and the volatile political environment often left them fearing imprisonment or even death at the hands of the state.

100 years ago, the Bolsheviks, led by Vladimir Ilyich Ulyanov (better known by his alias, Lenin) overthrew the Russian government, seizing post offices, electric works, railway stations as well as the state bank. After a shot rang out from the Battleship Aurora, the Red guard – a thousand strong collection of armed workers – stormed the Winter Palace officially taking control of the country. 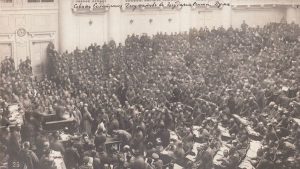 Assembly of the Soviets at Petrograd in 1917

To mark this historical occasion DiscMuseum created a playlist of Russian works that capture the spirit of Revolution or were written around the time of the revolution and the subsequent political climate itself!

Classical music of the 20th century marked a dramatic shift in compositional styles. The movement was spearheaded by the pioneering compositions of Arnold Schoenberg, which broke from tonality; the impressionistic works of Claude Debussy, which escaped previous harmonic rules and enriched the musical language; the highly experimental music of Charles Ives, who was one of the first 20th century composers to compose music that was in two or more keys simultaneously; and the highly expressive and often explosive music of Igor Stravinsky, who – most notoriously with the Rite of Spring – pushed music to new levels of barbarity! The Russian composers preceding the revolution would have been influenced by one or more of these composers whilst staying true (or attempting to stay true) to the Russian Nationalistic aesthetic of the previous generation of composers such as Tchaikovsky, Rimsky-Korsakov and Borodin.

The compositions included in this playlist show how the composers of the day reacted to this new musical climate, whilst often facing harsh political and musical criticism for their works, which potentially could have resulted in their imprisonment, or even death at the hands of the Soviet Regime! Most of the pieces are quite violent in their musical nature, perhaps reflecting the times of which they were written in!

The most remarkable among them were: 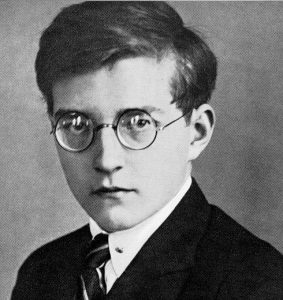 Shostakovich’s 5th symphony is possibly his best known work and for good reason. It’s final movement contains some of the most memorable and stirring conclusions to any 20th century symphony.

A few days before the premiere, an article appeared in the Moscow newspaper Vechernyaya Moskva, reportedly written by the composer himself. It declared that his work was “a Soviet artist’s creative response to justified criticism” This referred to the composer’s denunciation in 1936, which began with an attack on him in the Russian newspaper Pravda with an article entitled, Muddle Instead of Music. Days before the publishing of this article, Josef Stalin himself was in attendance at the production of Shostakovich’s Lady Macbeth. Shostakovich watched in horror as Stalin recoiled every time the brass section played too  loudly for his liking, and even laughed during certain scenes of the opera. The article itself proclaimed that Shostakovich’s work was  “coarse, primitive and vulgar”. Of course this period was an incredibly precarious time to be a Russian composer. Many of Shostakovich’s friends had been imprisoned or even killed for ‘subversive actions’ or creating works of ‘formalist’ nature, including the poet Boris Kornilov and the dramaturge Adrian Piotrovsky, who were both shot in captivity. He knew therefore, that his 5th symphony could potentially lead to his execution, based on whether or not it was well received by the Soviet empire. Listen to the final movement from the work here, a work that very likely saved the composer’s life!

Discover more works by the composer Shostakovich by clicking here

The epic Alexander Nevsky suite, contains music written by Sergei Prokofiev for choir and orchestra to accompany the 1938 film by Sergei Eisenstein, Alexander Nevsky. The film was the most popular of Eisenstein’s work, and was awarded the Stalin Prize in 1941.

Alexander Nevsky was intended as an allegory for the strained political relationship between Soviet Russia and Nazi Germany. Some of the helmets worn by the Teutonic infantry resemble those of the German troops from the First World War and in the first drafts of the script the invaders helmets were to sport swastikas. While Eisenstein was filming he published an article entitled Alexander Nevsky and the Rout of the Germans, which highlighted the similarities between Nevsky and Stalin. The film therefore was certainly intended to stir up anti-German feelings highlighting the important role the general populace played in saving Russia from her enemies.

The film is set in 13th century Russia (then known as the Novgorod Republic) and focuses on the story of Alexander Nevsky, a Russian prince who leads his people to drive back an invading force of Teutonic Knights. The Battle on Thin Ice is the longest movement of the suite, and depicts a long and bloody battle between the two armies on a frozen lake. The incredibly tense opening details the Russian army anticipating the arrival of the Teutonic knights and is incredibly successful at painting a picture of the horrors that await the soldiers in the oncoming, inevitable battle! When the battle begins the music is bombastic and violent, but maintains the melodic and harmonic sensibilities that make Prokofiev such an important and highly regarded composer. The music, like the film, is intended to stir a mixture of emotions; the dangers and inevitability of war, and the triumph of saving Russia.

Also listen out for music he scored to accommpany another of Eisenstein’s movies, Ivan the Terrible as well as his Cantata for the 20th anniversary of the October Revolution on texts by Marx, Lenin and Engels

Please, click here to listen to the best recordings of both works. 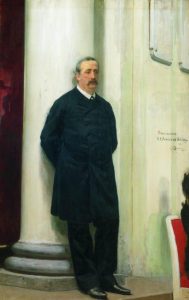