FROM MALEVICH TO KREMLENAGRAD: THE RUSSIAN PRESENCE AT THE PARIS BIENNALE

THE 31st PARIS BIENNALE (September 13-17) – the second time it has defied its own name to be staged in successive years – is down from nine days to five but with the number of exhibitors up from 62 to 75. A New Talents section devoted to young dealers is the main reason for that expansion.

The Biennale continues to be held in the Grand Palais halfway along the Champs-Elysées and, in another nod to Paris tradition, the Metro was shut down by a strike on the opening day.

The Biennale’s varied fare ranges from jewellery and watches to old books, comic strips, religious sculpture, Chinese bronzes, Portuguese ceramics, the Vienna Sezession and Art Deco. There is again much to interest Russian connoisseurs along the engagingly spacious aisles, starting at Kunstberatung of Zurich, displaying a Malevich Snowscape painted in the environs of Nemchinovka, near Moscow, in October 1929 while the artist was visiting his daughter Una. 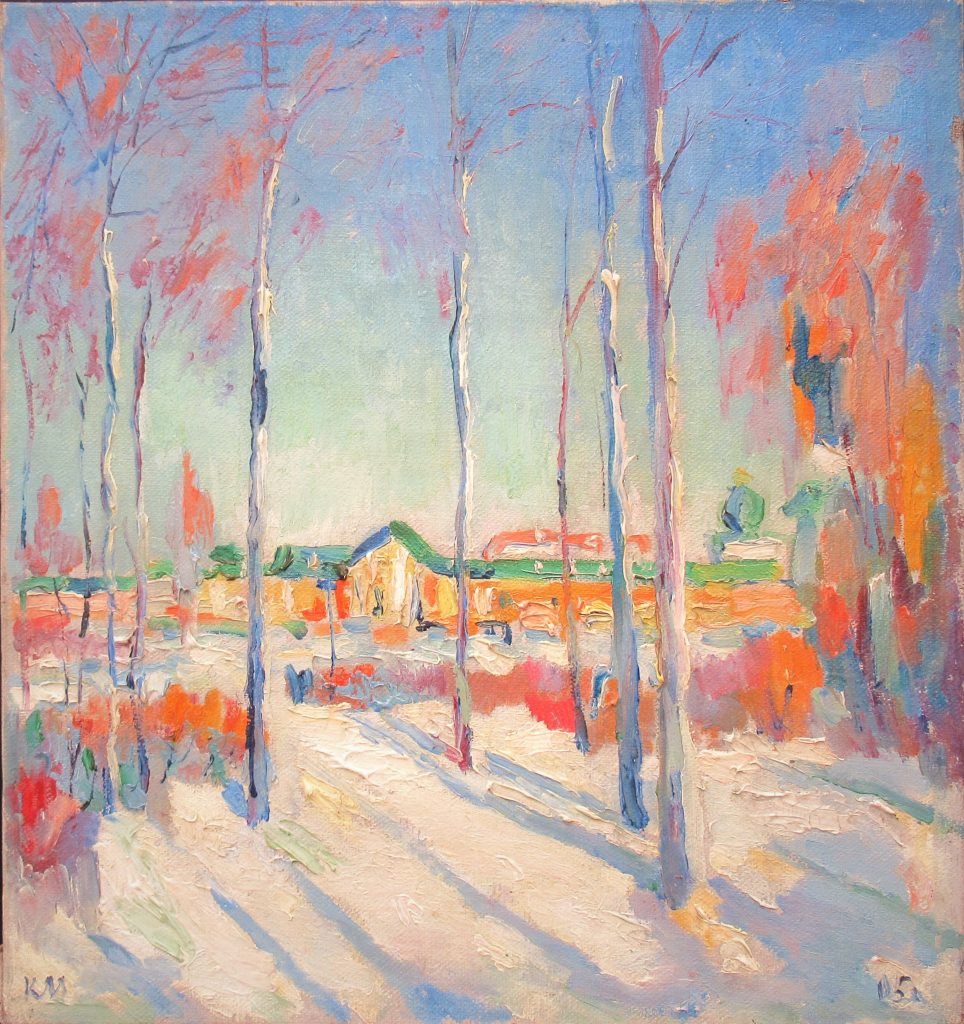 The accompanying brochure declares that Malevich gifted this almost square painting (36.8 x 34.5cm) to his medical consultant Nathan Puterman. It was inherited by his architect son Leonid and spent most of the 20th century in the Putermans’ Leningrad flat. It was shown at the Not Only The Black Square exhibition held in Moscow in Winter 2017/18 curated by Alexandra Shatskikh.

Kunstberating are also showing early works by Kandinsky and Petrov-Vodkin (his Archon from 1904), plus a 1923 Roerich mountainscape entitled St-Moritz.

The other most prominent Russian artists on show at the Biennale are those usual suspects Chagall and Poliakoff.

Chagall stars at Opera Gallery with Les Mariés in tempera on wood (1981/2), and at London’s Jerome Zodo Gallery with a monochrome 1971Maternity in ink wash and gouache.

There is a fine1955 brown and bordeaux Poliakoff at Brame & Lorenceau, entitled Marron. Zurich’s Galerie Von Vertes have two Poliakoffs – a scarlet-toned 1954 oil composition and a 1958 watercolour – alongside a late Jawlensky head, Meditation (1934), and a vigorous 1949 Composition (Peinture) by Nicholas de Staël.

Serge Férat returns to Galerie Berès with a Harlequin with Guitar (c.1922), while Léopold Survage catches the eye at Galerie Fleury with a 1912 watercolour, Coloured Rhythm (Phase), which may date from around the time he settled in France but reeks of Matyushin.

Russian sculptor Vadim Andrusov (1895-1975) moved to Paris in 1920 and studied with Bourdelle before branching into interior fittings, often in collaboration with the great furniture designor André Arbus. Andrusov’s 1952 bust of Arbus, unusually in both bronze and terracotta versions, can be admired at Galerie Collection’s.

Nearly twenty views of Russian cities feature in Joan Blaeu’s celebrated 11-volume Atlas printed in Amsterdam in the 1660s, including one of the Moscow Kremlin (winsomely entitled Kremlenagrad). A full set of the Atlas volumes can be had at Camille Sourget. 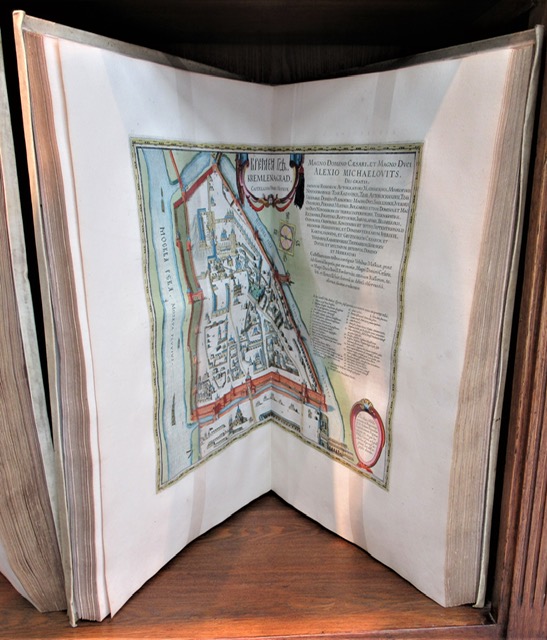 An innovation at this year’s Paris Biennale is a stand devoted to forthcoming highlights at the city’s main auction house, Drouot. One of these is a wool and sink tapestry evoking Asia, woven in St Petersburg in the 1740s, to be sold on November 15. 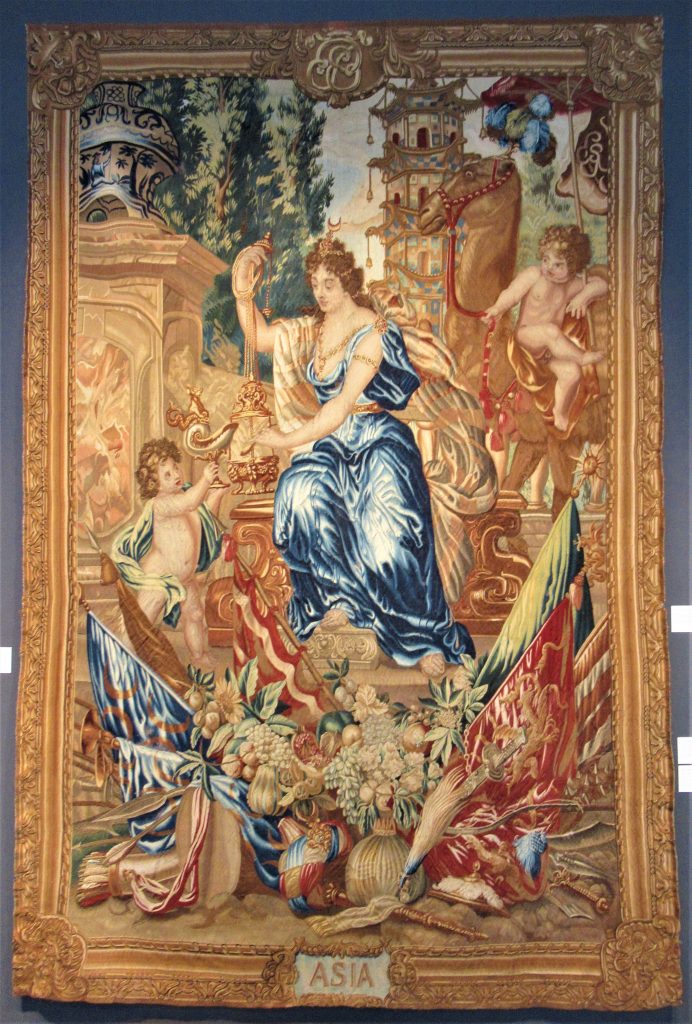 The Biennale centrepiece is a giant pavilion devoted to the state of Bahrein, filled with contemporary paintings, photographs, hand-crafted furniture, pearls and ceramics, plus – more incongruously – two 2017 acrylic works by the German artists Peter Klasen entitled Homage to Malevich.

The Biennale used to be dominated by 18th century French furniture dealers but this year, in the absence of the Perrin dynasty, their only survivor is Steinitz, with a stand whose opulence will strike a chord with visitors to the Moscow World Fine Art Fair, where Steinitz exhibited from 2005-08. Their panelled stand in Paris this year, replete with giltwood chairs, desks and tables, is fronted by an extraordinary equine sculpture in gleaming white marble. 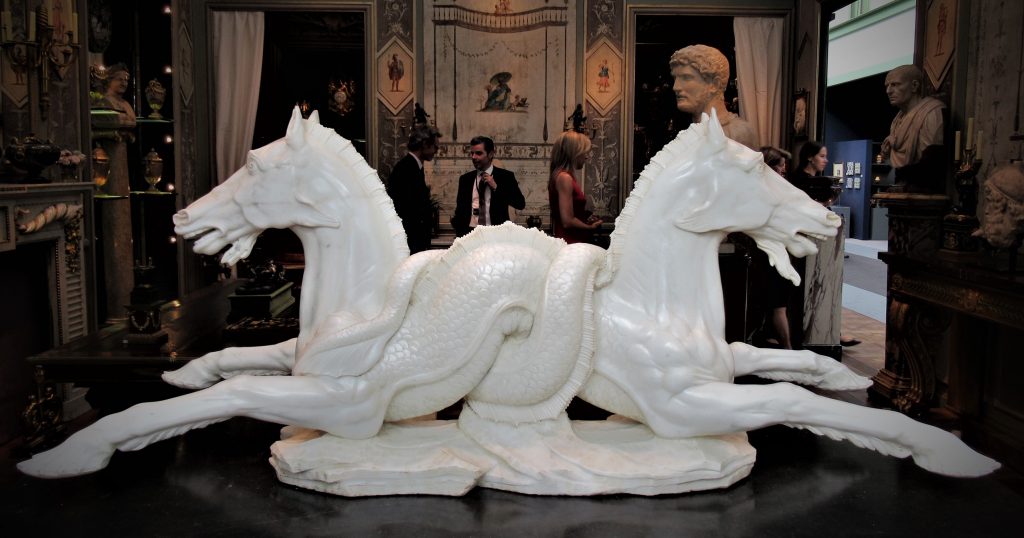 The dynamic, semi-abstract works of Eugène de Kermadec (1899-1976) are rescued from undeserved oblivion at Galerie Dodier, where they are shown alongside African tribal art on a stand shared with Galerie Meyer, whose smattering of ancient walrus-ivory carvings from eastern Siberia is complemented by an incised tjuringa– a story-telling shaft some 7ft tall, with white and ochre colouring – from South Australia.

Ancient artworks from the Middle East are on display at Kevorkian, while Cahn of Basel have a 1st century Roman micro-mosaic featuring a partridge singing to a fluffy white cat on a stool. A 19th century Ladies’ Mirror from Turkey, set with coral and lapis lazuli, can be handled at Kent Antiques of London. 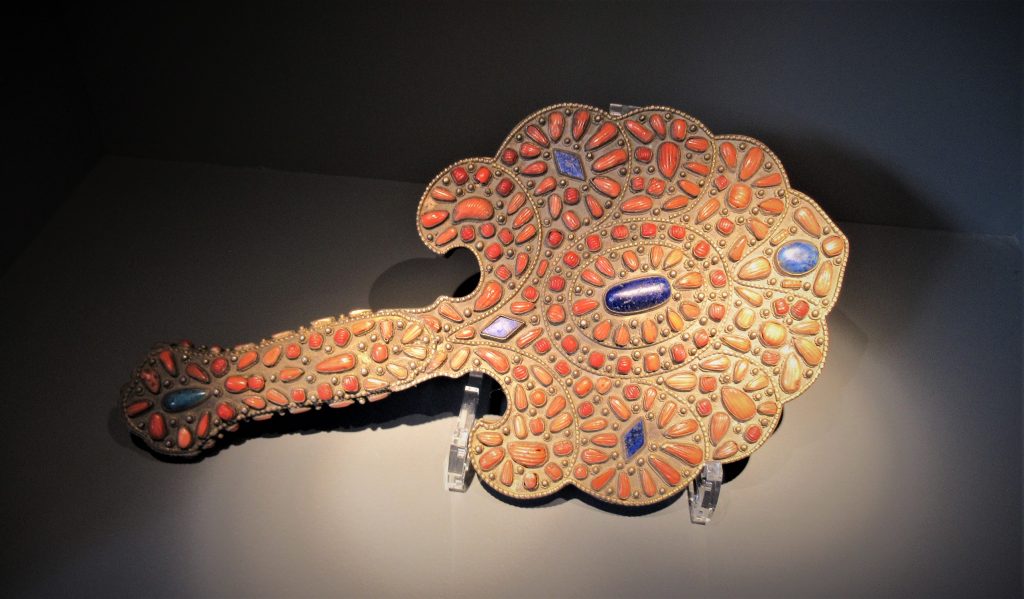 Fittingly, given the landmark glass and iron roof for which the Grand Palais is famed, artworks in glass are prominent in Paris this year.

The most spectacular is a stained glass cupola, 20ft in diameter, designed by Eric Bonte for Galerie Capazza, who are showing a dozen new works by the quirky Georgian silversmith Goudji.

Plexiglas creations by Monique Rozanes – still working though now in her eighties – are attractively juxtaposed at Martel-Greiner with 1970s acrylic abstractions by her late Argentine husband Leopoldo Torres-Agüero (1924-95). The Grand Palais roof is engagingly reflected in a pâte de verre Vanity at Rest (2010) by Antoine Leperlier at Galerie Michel Giraud. 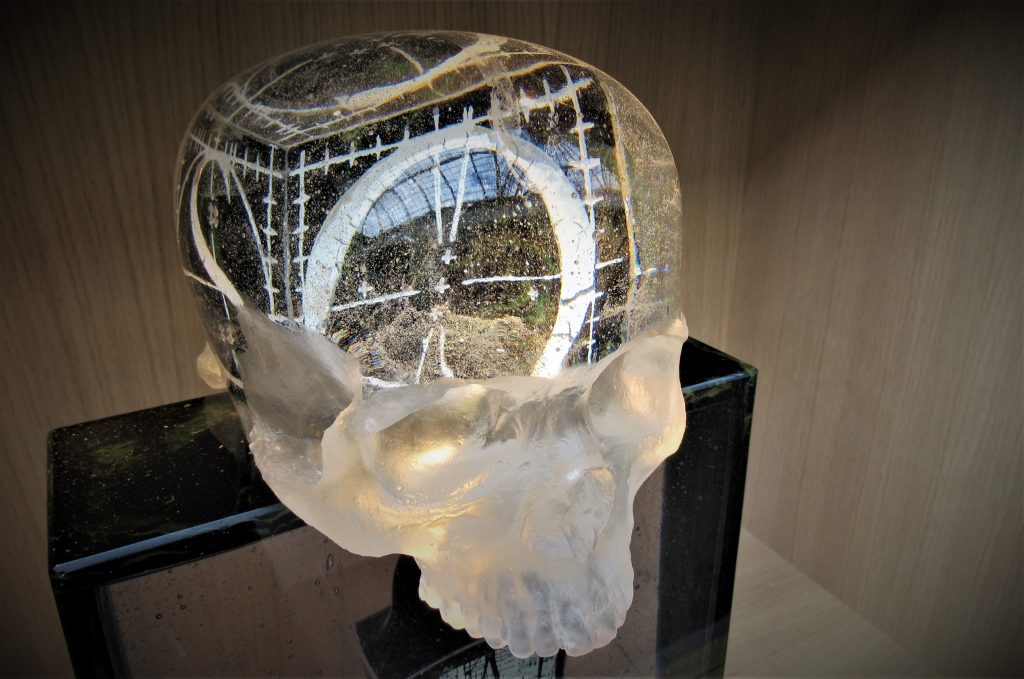 Most spectacular glasswork of all is Transchromie, a ‘labyrinth’ of glass panels in nine different colours by the Franco-Venezualan artist Carlos Cruz-Diez, originally conceived in 1965 but readapted for the Grand Palais. 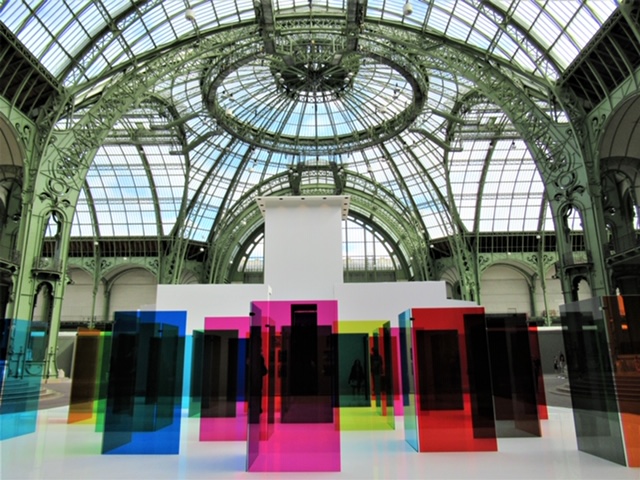