A genuine bidding war broke out in the saleroom on Wednesday 7 December when Bruun Rasmussen auctioned off exquisite gifts given from the Imperial Family to various Danes, among them kings and queens. 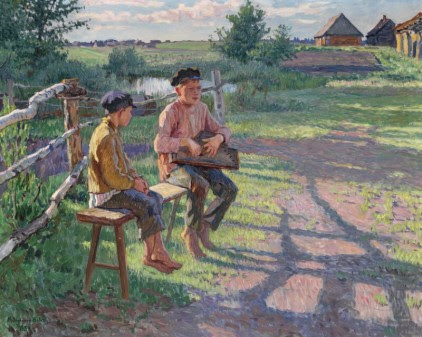 Throughout history, Denmark and Russia have had very close royal connections, and this relationship began with Christian IX and his wife Queen Louise. The Royal couple were called “The In-laws of Europe” because their six children were all married into various European royal houses, including their daughter Princess Dagmar who married Alexander III of Russia in 1866 and became known as Tsaritsa Maria Feodorovna.

“It is wonderful to see that our Russian customers continue to show a great interest in our Russian auctions, especially during COVID-19. Denmark and Russia have always had a close relationship, here exemplified in gifts from the Imperial Family to both the Royal Danish Family and Danish citizens,” says Martin Hans Borg, Head of the Russian Art Department at Bruun Rasmussen Auctioneers.

The Imperial provenances were particularly prominent in the jewellery featured at the auction, which included a beautiful Art Nouveau tiepin given by Tsaritsa Maria Feodorovna of Russia to her father, Christian IX of Denmark. In the Royal Family, she went by the name Minny, and in the accompanying box, there is a neatly written note with the words “Min Engle Papa fra Minny” (My Angel Papa from Minny). The hammer price for the tiepin was DKK 26,000.

Other gifts from the Tsaritsa included three brooches that she gave to her lady-in-waiting Thora Mortensen at the large villa “Hvidøre” just north of Copenhagen in the 1920s. Especially an amethyst and diamond brooch by August Hollming chased with the mitre crowned Imperial Russian double-headed eagle was at the centre of a true bidding war. It ended at DKK 90,000 – more than 225% of the estimated price. The brooch has never before been on the market.

Throughout the 18-1900s, many Scandinavians were posted in Russia, from where they brought home art objects to their respective countries of origin. This was also the case with the five paintings by Nikolai Petrovich Bogdanoff-Belsky, which were commissioned by the Danish merchant and Ford representative, Director Gunnar Helge Haagensen (1895–1957). All of the paintings sold well, but the interest was greatest when it came to “Summer landscape with two boys sitting on a bench, one is playing sitar for his friend”, which went for DKK 320,000 and “Children at a tea table in the sunny birch forest”, which achieved a price of DKK 190,000.

The same can be said about a painting by the relatively unknown Alexander Petrovich Blaznov. Nevertheless, the interest was great for his evocative portrait of a young Russian woman. It sold at 550% of its estimated value reaching DKK 110,000.

Bruun Rasmussen Auctioneers also sold a total of five Easter eggs. The Imperial Family liked to order Easter eggs from Fabergé, their favourite jeweller, or the Imperial Porcelain Factory. Fabergé also seemed to be the audience’s favourite; a small Easter egg pendant made for Grand Duchess Anastasia Mikhailovna of Russia by Mikhail Perchin sold at more than three times the estimated value as it made its way to DKK 32,000. The auction also featured some rare porcelain Easter eggs from Grand Duchess Olga Alexandrovna of Russia and Grand Duke Pavel Alexandrovich of Russia, which sold at DKK 12,000 and DKK 14,000 respectively.