Russian Delights at the Paris Biennale

THE 30th PARIS BIENNALE (September 8–16) marked the first time it has been staged in successive years. In line with most art and antiques fairs around the world, ‘The Biennale’ has morphed into an annual event… although, with its ‘brand name’ bearing the same global prestige as a Louis Vuitton handbag, it will continue to style itself La Biennale Paris.

The Biennale is held in the Grand Palais: a glass-roofed, Art Nouveau landmark halfway up the Champs-Elysées. Taking part costs a bomb: this year the number of participating galleries was down from 94 to 62. Visitor numbers, however, were up. Paying attendance (and I mean paying – entrance costs a whopping £31) soared 30% to 44,000, with an extra 9,000 pouring in for free on the penultimate evening as part of European Heritage Weekend.

Brigitte Macron, the President’s wife, had popped in for free a few days earlier, to be greeted by a Black Cube resembling a cross between Lenin’s Mausoleum and the Kaaba in Mecca’s Sacred Mosque. This Cube contained a modest array of Napoleonic memorabilia, no doubt meant to evoke La Grandeur de la France. Above the Cube psychedelic banners, with silhouettes of Napoleonic Generals, fluttered from the rafters. 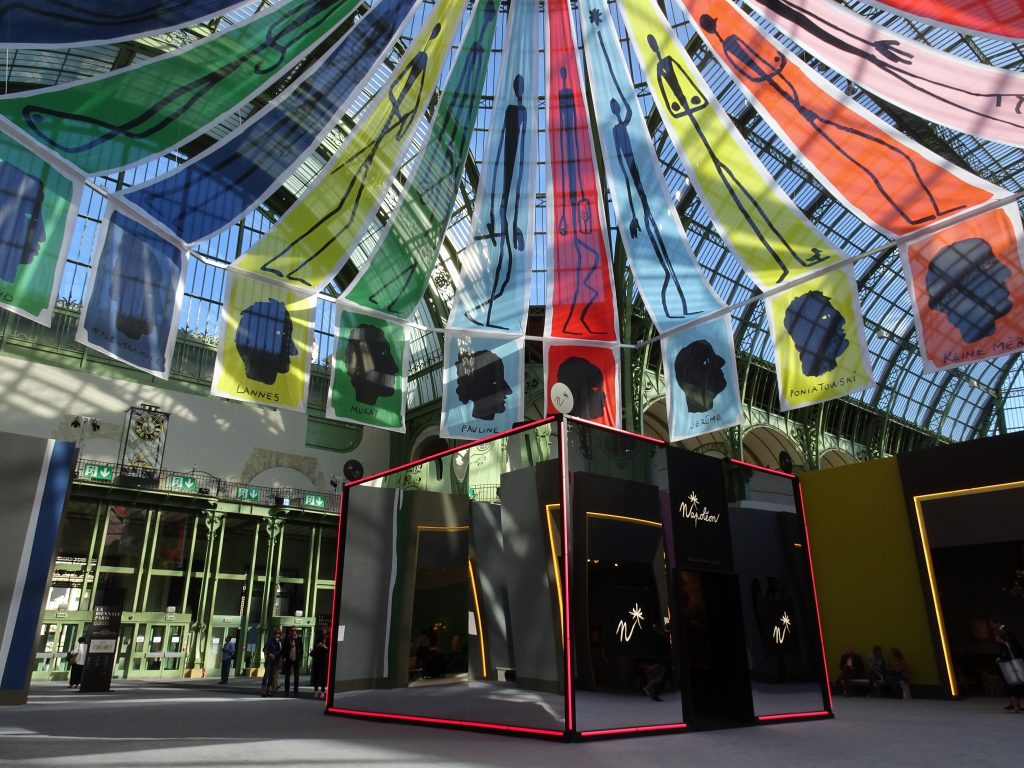 Such playful simplicity characterized the fair as a whole. Exhibitors’ stands lined two alleys either side of the Cube. Their sober, clean-lined design eschewed the pomposity for which the Biennale was long notorious.

The Biennale’s varied fare ranged from jewellery and watches to old books, comic strips, religious sculpture, Portuguese ceramics, the Vienna Sezession and Art Deco down to the inexpressibly quirky 2018 Octopus by Umberto that lorded it over the stand of Univers du Bronze.

There was plenty to interest Russian connoisseurs along the engagingly spacious aisles, starting with Siberian Eskimo Art.

That’s not something you often find in Western Europe, but Left Field (I mean Left Bank) dealer Anthony Meyer – a veteran of Maastricht and other top international fairs – had dug up a 1500 year-old toggle in the form of a crouching Polar Bear from Eastern Chukotka.

The 2-inch figure, in walrus ivory darkened (or ‘mineralized’) with age, was lined with prophylactic tattoo markings and pierced to allow the passage of sinew lines. It was priced at a very reasonable 940,000 rubles. 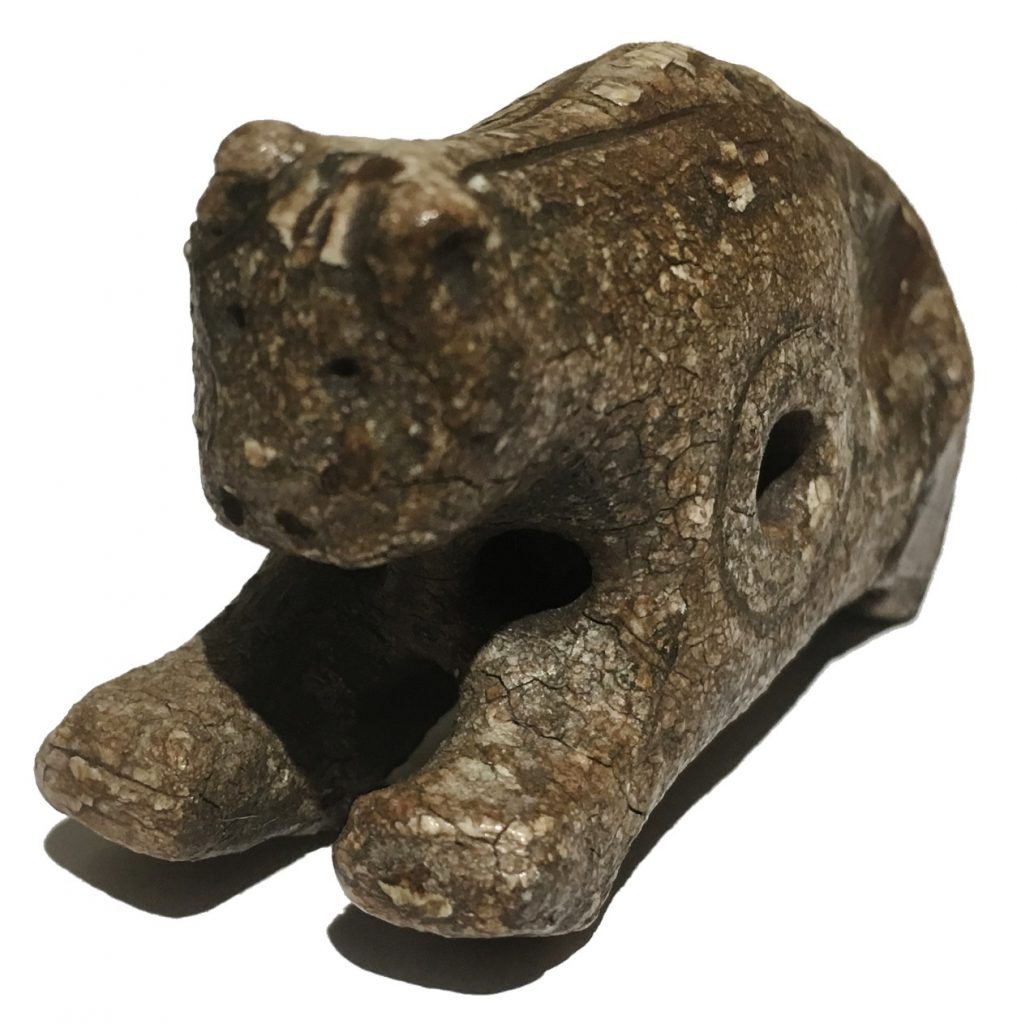 The amiable Mayer, his walrus moustache bristling in the Indian Summer heat, told me that his ancient bruin came from the shores of the Bering Strait opposite Alaska – doubtless from the Ekven burial site excavated in recent decades by specialists from Moscow’s State Museum of Oriental Art.

The Biennale used to be dominated not by Russian bears but by 18th century French furniture, whose dealers styled themselves the ‘Barons’ of the Paris trade (others preferred the term ‘Dinosaurs’).

Changing times, changing tastes; many of the barons have now retired, some forcibly after a string of scandals involving fakes and deception. Just a couple remained at this year’s event: Patrick Perrin and Benjamin Steinitz, who fronted his stand with a pair of bronze Hercules figures (c.1700) after Charles Le Brun of Versailles fame. 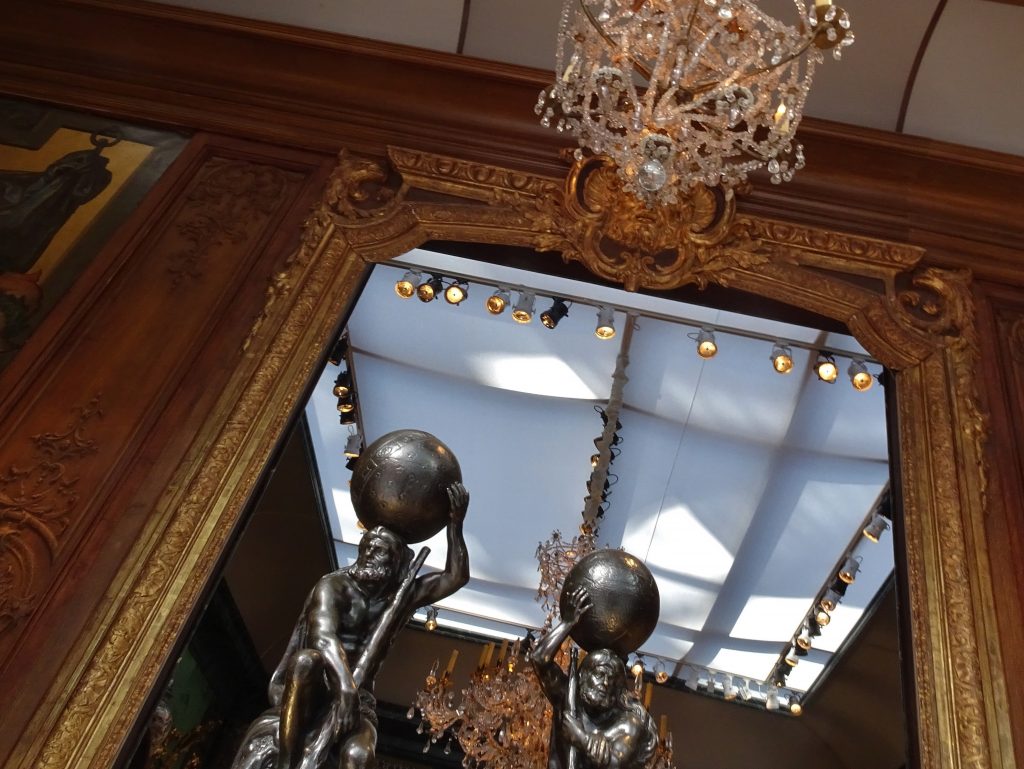 For reasons that escaped me, my old friend Benjy – beloved of many a Russian millionaire since his swaggering stands graced the late and great Moscow World Fine Art Fair – thought fit to welcome visitors with a giant, block-lettered placard reading ALL THE DECORS AND PANELLING ADORNING THIS STAND ARE AUTHENTIC. Well, good to know. THEY ALL BELONG TO THE STEINITZ GALLERY, added the placard helpfully, AND ARE FOR SALE.

Like Benjamin, a number of other Biennale exhibitors also take part in its Brussels equivalent, BRAFA. These include Jacques Barrère (Asian sculpture), Clara Scrimini(contemporary glass), Cahn (antiquities) and Alexis Bordes who, in Paris, reported keen Russian château-owner interest in a portrait of Louis XV’s daughter Madame Adéläide, set off by a giltwood frame pleasingly topped by a fleur-de-lys shield.

The 1784 portrait, by Julius Heinze, lorded it over Bordes’ back wall. The 52 year-old Princess– fourth of Louis XV’s eight daughters – wore a scarlet dress that glistened rather more appetizingly than when Bordes bought the picture at auction for around €40,000 eight months ago. Expert cleaning and restoration justified its rather higher Biennale price-tag. 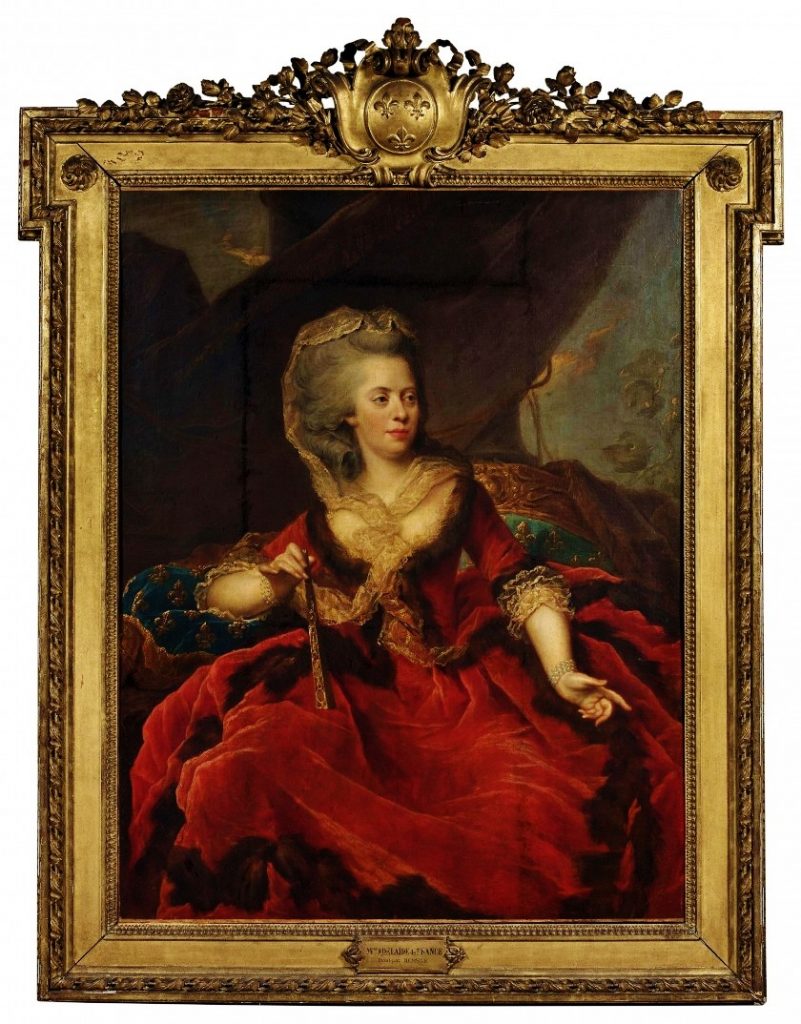 Heinze (who like to brand himself Heinsius) hailed from East Germany, grew up in Holland, worked as court painter in Weimar, then became family portraitist to Louis XV.His works can be found in the Versailles and Louvre. He painted Adélaïde more than once.

The prospective Russian buyer may or may not have been aware of an exciting Russian episode near the end of the Princess’s life.

Adélaïde and her younger sister Victoire, both spinsters, fled revolutionary France for Italy in 1791. They spent five years in Rome then, as Napoleon’s armies advanced, moved down to Naples (whose Queen, Maria Carolina, was Marie-Antoinette’s sister). In December 1798, as the French marched on Naples, the court left for Sicily. Adélaïde and Victoire departed in the opposite direction. According to Wikipedia, they sailed to Trieste via Corfu on a Russian frigate.

Never trust Wikipedia. In December 1798 the Russian fleet was nowhere near Naples, it was in the Adriatic.

The ageing Princesses crossed southern Italy in a carriage, from Naples to Brindisi – which was liberated by the Russian Mediterranean Fleet under Admiral Fyodor Ushakovon 23 April 1799. Ushakov whisked the Princesses to Corfu, which he had captured from the French two months earlier. Here they found a boat to take them to Trieste (then part of Austria, and thus an ally of Russia – and safe haven for French émigrées). Victoire died soon after, Adélaïde in 1800. Both were buried in Trieste Cathedral. In 1817 their bodies were reinterred in the French royal acropolis of St-Denis, just outside Paris.

Another French painting with Russian appeal was Paul-Louis Bouchard’s picturesque view of Moscow in the Snow (1900), showing the frozen banks of the Moscova beneath the Kremlin. This could be admired at De Souzy, alongside a welter of twee interwar snowscapes by Ivan Choultsé. 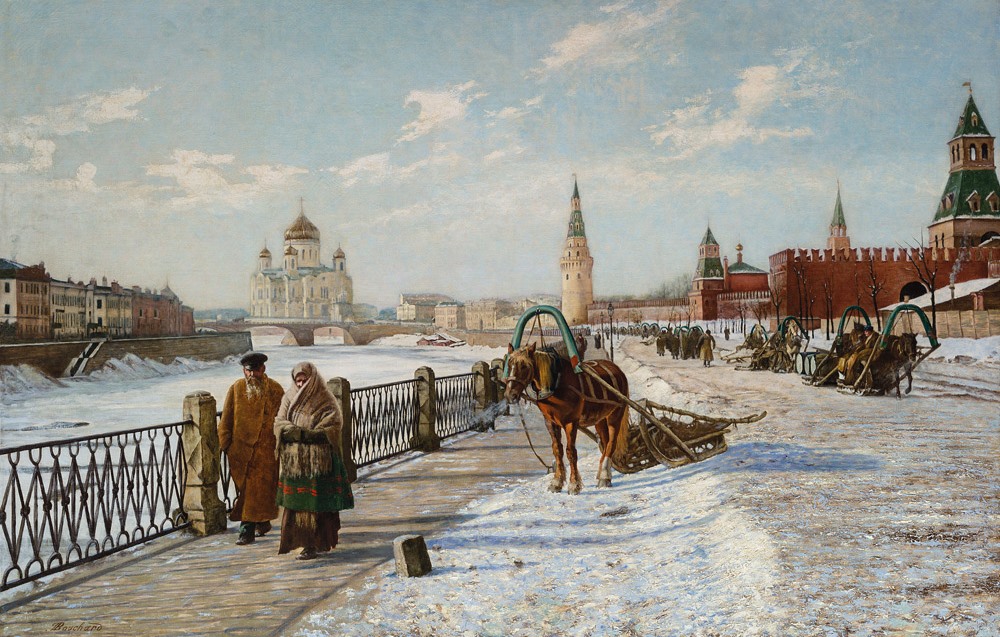 Raphaël Roux dit Buisson had decades’ worth of Chagalls – from a late ’20s Pink Cow in Vitebsk to an early ’80s Red Rooster. Less typical than a Chagall view of the Champs- Elysées (1952) and Two Faces (1972) was his 28 x 40cm white marble bas relief depictingReclining Lovers (c.1968). 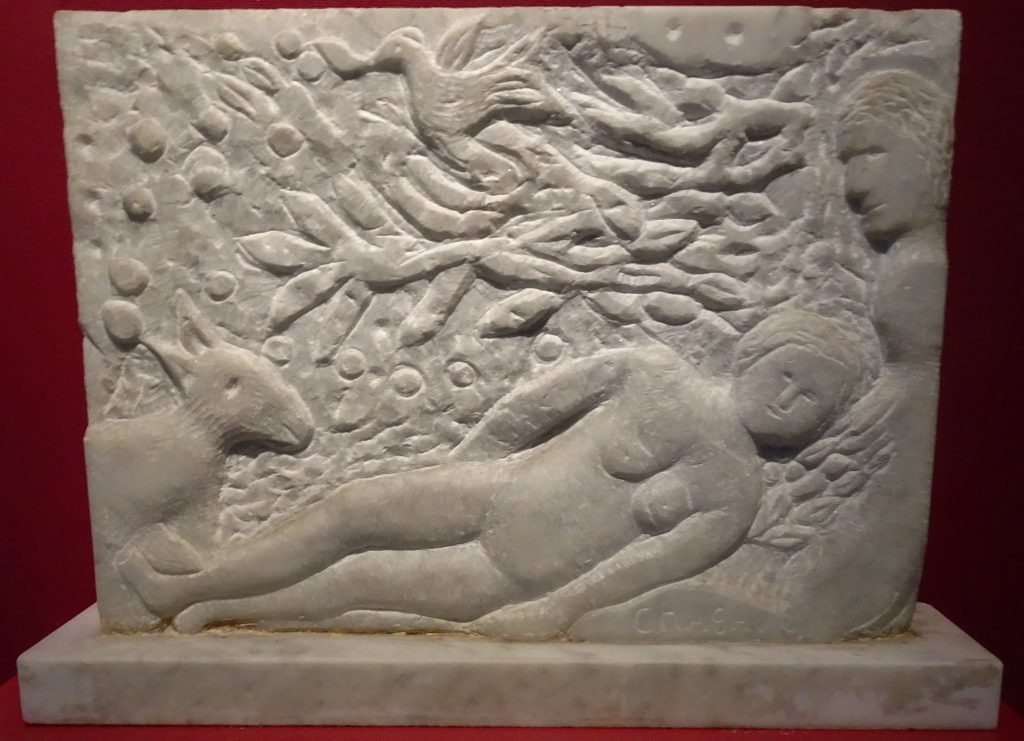 Another son of Vitebsk, Osip Zadkine, was represented at Fleury by a late ’50s casting of his 1929 bronze Figurine Drapée – and by the same small gouache, Les Cavaliers (1925), that the gallery took to BRAFA last January.

Whitford were back with an even bigger array of works by the under-rated Belgian artist Joseph Lacasse than they showed at BRAFA. Lacasse spent much of his career in Paris, where he inspired and nurtured Serge Poliakoff. Their paintings often look similar, but Lacasse’s are better – and cheaper.

For many years BRAFA has had its own Moscow Liaison Officer in the person of Franco- Russian Countess Ekaterina Limonad de Rochambeau. Russian collectors and designers have become a regular presence in Brussels as a result. The new team now running the Paris Biennale could reap future benefits by adopting a similar policy.