Continuing on a journey to find out what is available for the lovers of Russian art and culture in the UK collections, it is appropriate to go with a winter theme, especially that the festive season in the Orthodox world has only just started.

However, it is not going to be one of the Kustodiev’s chocolate-box images of Russia with its spirit-restoring, mercantile snow drenched glamour – think of his painting ‘Maslenitsa’ (1916) in St Petersburg. 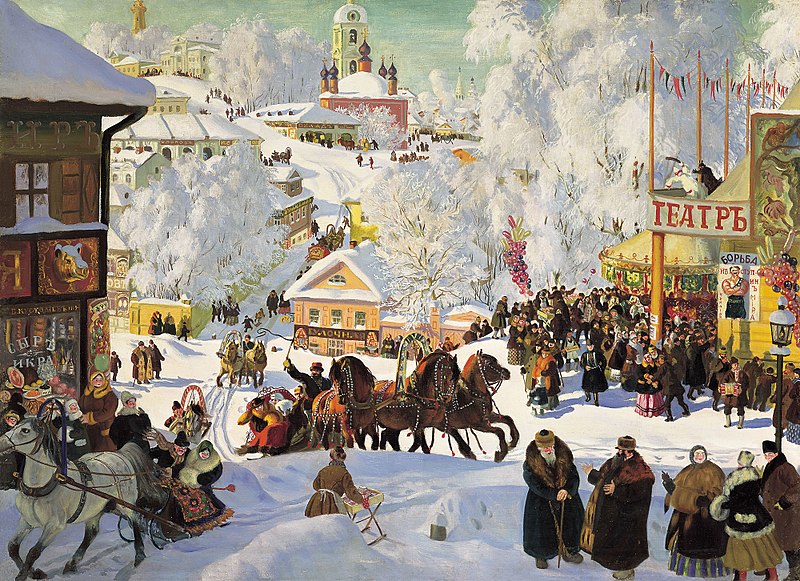 Instead, I would like to turn to something more obscure, but which dwells in London.The work in question is a colour lithograph illustration to the folk tale Snow Maiden (or Snegurochka) by Ivan D. Suytin published in Moscow in 1900 in a publication entitled ‘Narodnye Kartiny’ [Russian Folk Pictures]in the Victoria and Albert Museum, London. 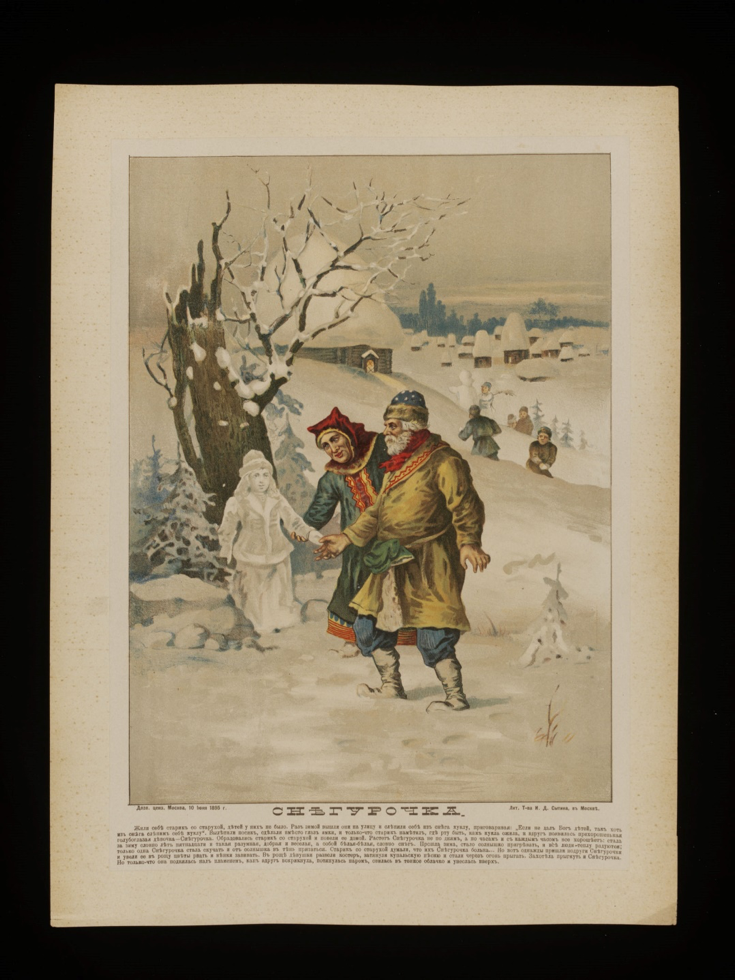 Colour lithograph from a set of 50 by Ivan D. Suitin (or Suytin) entitled ‘Narodnuiya Kartinui’ [Russian Folk Pictures], mounted on card and published in Moscow, ca. 1900

The print found its way to the UK through the purchase of a New York book dealer in 1980s’ and has lived in the Prints and Drawings room of the V&A ever since. Viewing the image requires some physical effort – endless corridors of the V&A and signing in and out of the Prints and Drawings room – but it is well worth it. In the dimmed protective lights of the archive the grainy texture of this five-colour lithograph looks rich in detail. It awards another bizarre discovery. The image is not a page from a book as it may appear, but an A1 poster contained in an ornate cloth-bound portfolio with other posters of beautiful women, laughing children and Russian folk songs. The images are not signed by the artist. Ivan Suytin was, in fact, the founder of the largest publishing house in nineteenth-century Russian.

The print is accompanied by a brief account of the fairy-tale. A hopeful story of an elderly childless couple making a daughter out of snow (a Russian Pygmalion!) finishes sadly as the Snow Maiden melts away in the summer game of jumping over a bonfire with her girlfriends. However, she is much more than that.

Long before the princesses from Disney’s Frozen entered the popular psyche, the image of the Snow Maiden had dominated Russian kids’ imagination. Those lucky to have been born in the USSR, to paraphrase the Beatles song, would remember the honour of being selected to be a Snow Maiden at the New Year’s school celebrations (think of the Virgin Mary in the nativity but with a lot of speaking lines). I cannot vouch for the persistence of the tradition nowadays, but I can imagine that it is strong.

And now to the origins. Surely, a maiden made of ice and snow could only have evolved in the depth of Siberia and its folklore. However, the Snow Maiden only appears in one fairy tale unlike, say, Baba Yaga, who is a recurring character. The reason for this is its somewhat artificial introduction to the Russian folklore. Her appearance in A. Ostrovsky’s literary fairy-tale of 1873 immortalised her. The daughter of Aleksandr N. Afanasyev, a Russian equivalent of the brothers Grimm, Snegurochka can trace its genealogy to the Celts, but has been christened and romanticised along the way.  If one thinks she is far away from home, remember that Celtic settlements stretched into the western Carpathians, so Snegurochka did not have to travel that far after all.

She bears little resemblance with her prototype and it is, probably, for the better. To save themselves from the evil winter spirit, ancient Celts sacrificed young virgins by tying them to a tree (often an evergreen) overnight in the middle of winter. Lovely! As the practice stopped with the introduction of Christianity, the frozen figures of the young unfortunate maidens continued to haunt human imagination and transformed into the folklore character of Snegurochka. It is Afanasiev who we must thank for humanising the character even further as, unfortunately, Snegurochka continued to be relentlessly murdered by her girlfriends or taken to the forest by her parents to die even in her post-pagan adventures. Poor girl.

The lithograph summons up thoughts about traditions and their evolution. It is fascinating to think how something that appears so traditional as a character and an artefact actually represents a progressive leap in human psyche. Perhaps, deviation from tradition is not such a bad idea after all and what appears as a tradition may actually be a newly made convention. The Snow Maiden is a good example of this. Tradition and its controversy are intertwined with her image. 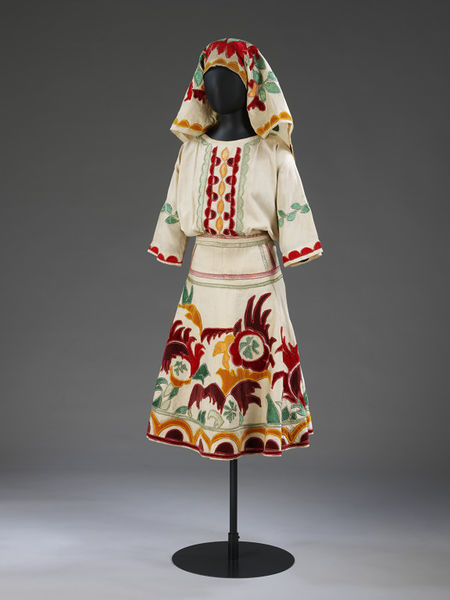 The more experienced Russian culture enthusiasts would also be familiar with the Snow Maiden of Diagilev ballet. Diagilev eventually stopped productions that were based on the Russian folklore as he was anxious that popularisation of the Russian peasant culture inadvertently lead to the Russian Revolution. M. Larionov’s costume of the Snow Maiden for Diagilev/Massine’s ballet Le Soleil de nuit (1915) is also available at the V&A theatre collection and looks positively folk and … dangerous? One can imagine Frida Kahlo wearing it as a revolutionary statement, if only the skirt was longer.

At the same time, there is something Bavarian rather than Russian about the costumes of the elderly couple in Suytin’s lithograph and the winter fun against the convincingly receding background reminds of Dutch genre paintings. Whilst emphasising a tree as a symbol of life (or death?) looks strikingly Friedrich-esque. 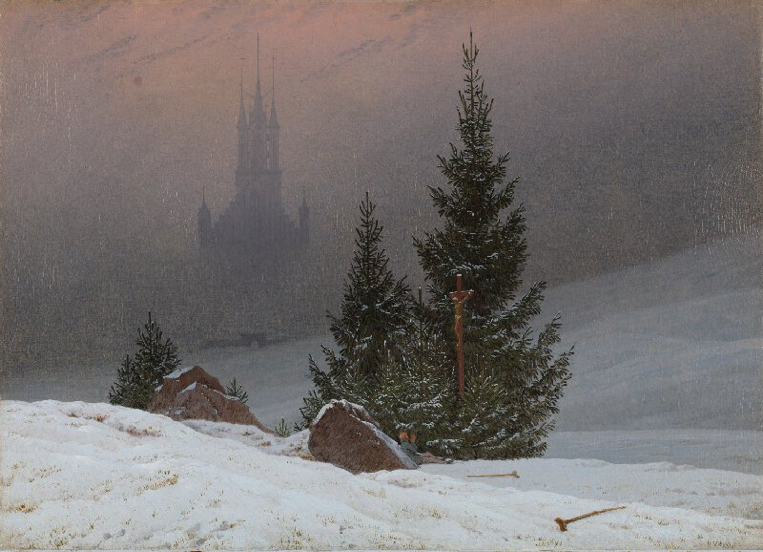 This European guise would be a short spell for the Snow Maiden. Looking at this 1900 lithograph, one ponders about further transfortations that she is about to undertake to become the female symbol of the Soviet Christmas. Indeed, a woman can be many things and Snegurochka is a good example of that.

And so the Snow Maiden epitomises something very current about Russian culture – a fascinating example of a tradition in flux against Russia’s complicated political history. She is a survivor and an extraordinaire of guises. The V&A lithograph is only one of them. I prefer her current role – the granddaughter of Father Frost, she summons him up at children’s New Year’s parties and wishes everybody a very happy new year.