Why go and see the ephemeral sculptures of Naum Gabo in the UK art collections? Well, his sculptures can offset many principles and pursuits of our own age. Besides, of course, being exceptional examples of elegant Constructivist aesthetics. 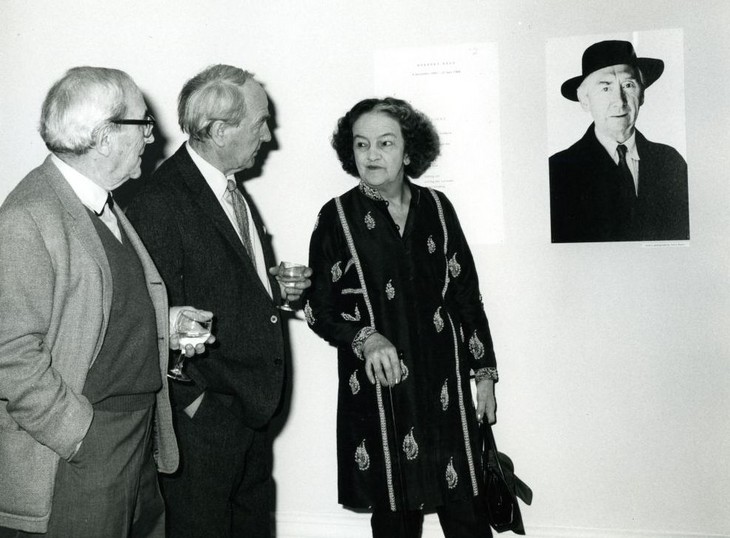 Naum Gabo, Henry Moore and Barbara Hepworth next to a portrait of Herbert Read at the Herbert Read Memorial exhibition at the Tate Gallery 1968. Tate Archive

Venturing away from the obvious destination to sample international art Tate Modern, a somewhat more interesting relationship with Gabo’s sculpture can be established in two collections that contain his works: Kettles Yard in Cambridge and Tate St Ives. Despite their geographical distance the two venues are thematically linked. Both have considerable collections of British Modernists artworks, among whom Naum Gabo is often placed, hence occasional confusion surrounding his origins.

Jim and Helen Ede moved to Cambridge in search of a stately home. Instead, they bought a number of derelict cottages. They became home to their extensive collection of the Modernist art. Once opened in 1957, the couple maintained an ‘open door’ policy welcoming Cambridge students to visit every workday afternoon to enjoy their collection. The Kettle’s Yard’s Student Picture Loan Scheme echoes the benevolent tradition of the Edes to share their art. students of Cambridge and Anglia Ruskin can apply to loan an art work form kettles Yard to have in their room for a year. 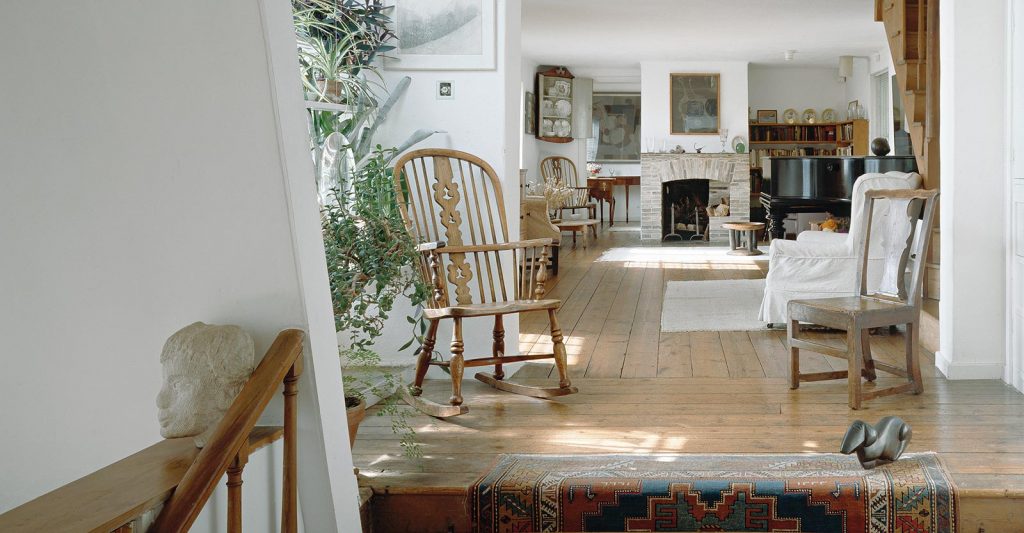 If Jim and Helen Ede (the founders of the Kettles Yard collection) described themselves as ‘friends of the artists’, then Naum Gabo can be described as a ‘friend of the British Modernists’, namely Barbara Hepworth and Ben Nicolson, whom he followed in 1939 to their self-imposed exile in St Ives.  His Linear Construction in Space No.1 (1944-1945) on display at Kettle’s Yard resembles a musical instrument in spite of Gabo’s attempts to dematerialise sculpture. The association is exploited by the sculpture’s placement on top of the reflective surface of the grand piano. Gabo’s piece seems like a harp silently accompanying the piano. Barbara Hepworth was inspired by Gabo’s application of wire, which she incorporated into numerous sculptures of her own.

First of all, there is the question of plastic. Naum Gabo pioneered and fetishized plastic as a manifestation of the immaterial in art. For him plastic symbolised the brave new world. It is difficult to imagine what it feels to regard plastic as a material capable of dignified timeless aestheticsin a society that demonises it. Let alone to understand what it feels like to endow a material with transformative function that heralds advances in science and social progress.

On the one hand, Gabo denied art’s utilitarian function, yet was ideologically rooted in the socialist and Constructivists aesthetic sensibilities.

What would be the equivalent of plastic nowadays for an artist? Something progressive, offering a wholesome aesthetic, an educational value and a break from the misguided past. Something biodegradable, that helps attain social nirvana and educate children to be better and kinder citizens. Perhaps, something made form the eggshells of the chickens reared in one’s own garden. Naum Gabo’s assuredness with the plastic just shows how much at a loss we are for the art material that would symbolise the ambition of our age. Wood is lovely and socially acceptable, but implies a merciless murder of trees and the shrinking Amazon rainforest. Stone is the material of the archaic autocratic regimes. I wonder if it is Gabo who should be credited for giving the material a sense of social responsibility, an opportunity to express form and social sensibilities? 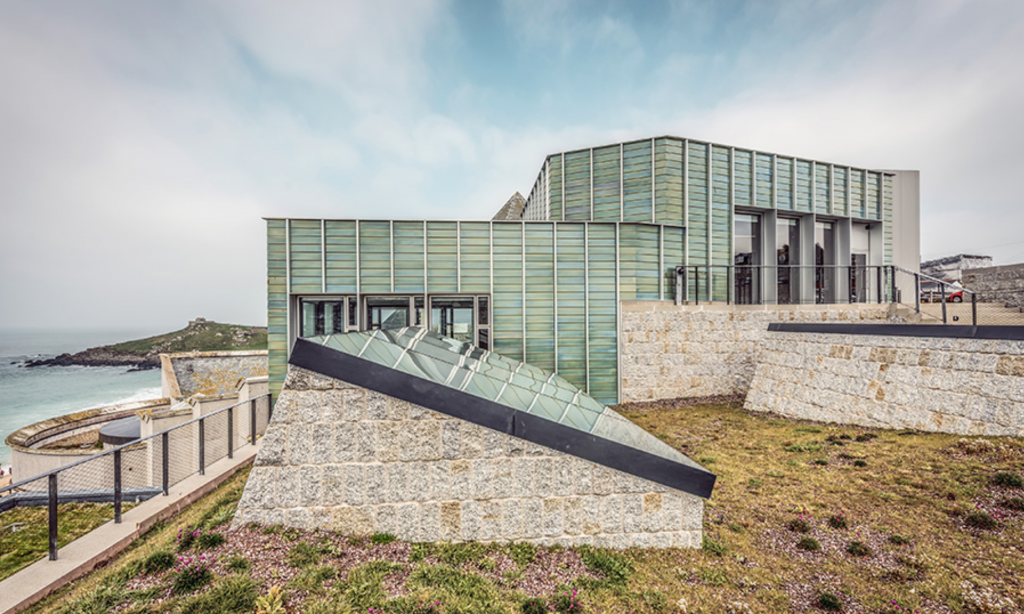 Modern society is in deep need of a sculptor who would transcend the materiality of a material and aestheticise it. Some of the sculptural materials that emerge now (bioplastic and hydroceramics) at least appear to bear ecological sensibilities. Unlike the monolithic Assyrian and Egyptian sculptures, they biodegrade. Of course, we have other means to preserve a memory of our civilisation. Sculpture stands for permanence and even Gabo’s seemingly weightless transparent sculptures are  permanent. So, is he the last of the Old Masters rather than the first of the New Modernists in his attitude to the materials, namely, pertaining its millennial permanence?

Herbert Read coined Gabo’s experiments as “the highest point ever reached by the aesthetic intuition of man”. Despite plastic’s lack of nobility, like marble or bronze, Gabo’s sculptures would be sure to survive the next thousand years.

Gabo believed that transparent materials could reveal the internal dynamics of the sculpture. To think that such exists is fascinating. Like a Cubist, Gabo was delving into the new understanding of the matter, offered by the developing science, as complex and penetrable. 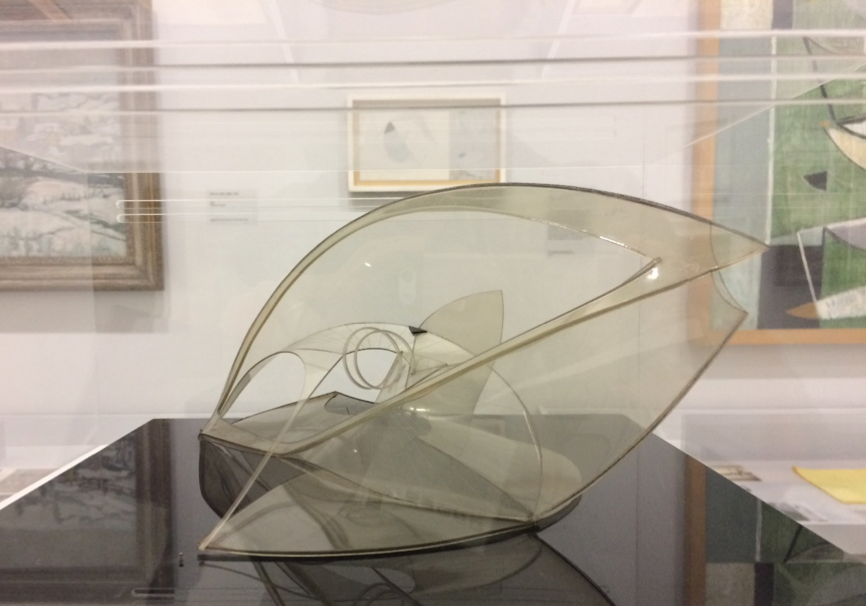 There is also a question about our relationship with the landscape. Gabo’s Spiral Theme (1941) at Tate St Ives is exceptionally fitting with the other painting surrounding it bound in the British landscape. Circumambulation around the sculpture allows to view these paintings through the sculpture’s changing prisms. Be warned, it is not an elegant activity as it may sound as the sculpture is not on an eye level and there is no way of doing this in a dignified way. However, the experience is worth it.

Despite the resemblance to the landscape and the natural form, Gabo was not overtly loyal to it as a source of inspiration, as was Barbara Hepworth, for instance.

The popularity of St Ives rides on the accessible narrative of romanticising the landscape that provides a powerful artistic inspiration. Gabo sculptures at Tate St Ives appear to tell a story of a landscape that gave him a powerful inspiration for his work. My three-year old thought that his sculptures looked like shells. It appears easy! One leaves the gallery with a satisfying feeling that they have sussed it all up. Yet, I think the story is a bit more complex.  Gabo did find the needed refuge in St Ives in 1939, but he also left Cornwall after seven years, at the first given opportunity on the first ship that sailed to the US to escape the parochial paradise where he never quite fitted. I suspect it was also a bit of a problem getting hold of the cellulose acetate and perspex there in the 1940s.

Strolling through the nearby Padstow or Padstein (after the famous chef who transformed it from a sleepy fishing village to an epicurean retreat) the unfashionable idea about the force of the individual genius comes to mind. There has always been plenty of fish, if not chips, in Padstow, but it is Rick Stein who created there his famous fish and chips among other places, which boasts the never-ending queue, even at breakfast. 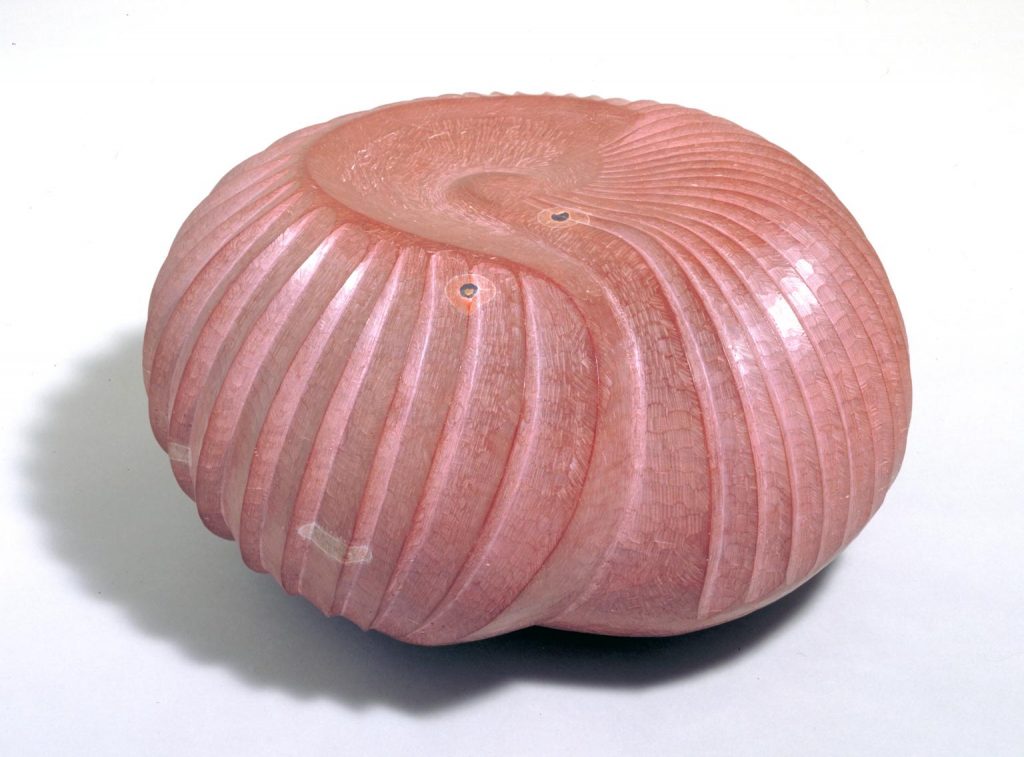 The same goes for St Ives. The lesson about the somewhat unexpected presence of Gabo’s influence in Cornwall is that himself and his fellow British artists would have changed the course of British art, even if they ended up in Port Talbot in Wales during WW2. It is a disappointing idea for art pilgrims looking for inspiration in Cornwall, but a positive one for humanity. It is the force of human imagination and a good company that makes ideas flourish.

Another one of Gabo’s sculptures at Tate St Ives Red Stone (1964-5) greets the visitors in the atrium of the gallery and seduces the aspiring artists into the false sense of security that the natural geological surrounding would sublimate into their imagination, just as they did into Gabo’s.

The Tate St Ives gallery space designed by Evans and Shalev provides multiple opportunities to form that aesthetic relationship with the landscape, especially on the roof top restaurant. There is an educational value in the architectural design of the Tate that seems to say – look, that is what Gabo and his fellow artists saw, that is how he viewed his surroundings and got inspired. You can do the same! It is a wonderful idea, if not simplified, but an exceptionally pleasurable one over a cup of coffee overlooking a beautiful view. One can wonder over a slice of delicious Cornish cake just how different the undulating curve of St Ives’ bay would have looked like from Gabo’s native Briansk, yet he left it all behind to pursue new adventures. 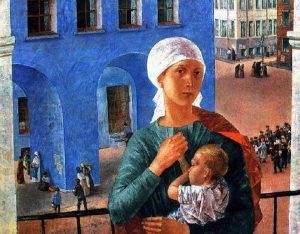