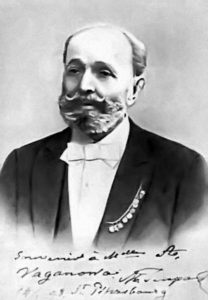 The annual Russian Ballet Icons Gala event has already become a tradition in London. It is anticipated long in advance and attracts most honoured guests from Russia, the UK and beyond. This tradition was initiated by a musician and entrepreneur Olga Balakleets and her company Ensemble Productions in 2006. The Gala  brings together an array of world class dancers from the Bolshoi and the Mariinsky theatres, the Royal Ballet and other leading companies across the world to celebrate the legacy of  the Russian ballet. In 2017 it was commemorating Dyaghilev and the Russian seasons. This year, it celebrated the birthday bicentenary of Marius Petipa, the great Russian ballet master.  Most ballets performed onstage were either ‘after Petipa’ or contemporary interpretations of his legacy. The programme of the event contained addresses from the Russian Ambassador in the United Kingdom, His Excellency Mr Alexander Yakovenko, Vladimir Medinksy, Minister of Culture of the Russian Federation, Rt Hon Matt Hancock MP, Secretary of State for Digital, Culture, Media and Sport, Rt Hon John Whittingdale, OBE, MP, Director of the Royal Ballet Kevin O’Hare, Dame Lillian Hochhauser and FT Ballet critic Clement Crism, who also penned down the introductory in-depth article commemorating Petipa’s legacy.

The first and very instant impression of  this year’s Gala is that it has considerably evolved since its early days and become more selective in its programme and choice of performers. The idea to alternate much-loved traditional classics and contemporary choreography also seemed to work quite well this year. 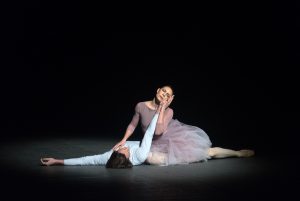 Among the contemporary performances our particular favourites were an extract from Yuri Possokhov’s controversial Nureyev brilliantly danced by the Bolshoi principals Maria Alexandrova and Vladislav Lantratov to Liszt’s music. Despite the lack of context (which was a drawback), Lantratov seemed to convey the style and the panache, so characteristic of Nureyev himself.  Hopefully, the full ballet will follow soon despite the controversy surrounding it in Moscow. 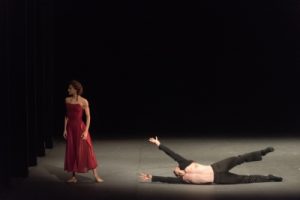 The world premiere of Ilya Zhivoy’s  A Flashback was visually and choreographically stunning. The dancers Ekaterina Kondaurova and Roman Belyakov (both from the Mariinsky Ballet) managed to overcome the challenge posed by intellectual and somewhat ascetic, minimalist score by Arvo Pärt, transforming it into a moving, if somewhat obsessive memory. Konstantin Binkin’s dramatic lighting concentrated on two figures dancing in a single spotlight,  the characters emerging from the shadows and then receding back into darkness. Zhivoy’s complex choreography captured the range of  emotions from regret to elation and loss. Kondaurova, in a flowing red dress, was very expressive breathing emotion with her every movement. Some elements she performed, like curving her sinuous, lithe body into an ellipse around Belyakov, were complex and challenging, but her technical prowess never interfered with the dramatic and tragic message of the dance.

The evening started with Royal Ballet’s Mayara Magri and Stanislaw Wegrzyn dancing an enchanting piece from Coppélia. Both were impessive: he as a prince, with his proud posture and confident dancing, and she — with soft steps, confident balances and fouettés.

The classical theme was continued by Francesca Hayward and Federico Bonelli, two other Roal Ballet principals, who performed an act from Giselle. Francesca Hayward was truly magnificent with her airborne elevations and soft arms. However, we as staunchy traditionalists, greatly missed the flowing skirts, usually completing the impression of an air spirit: these modern festooned, clingy fabrics failed to do justice to Hayward’s truly airy flight! 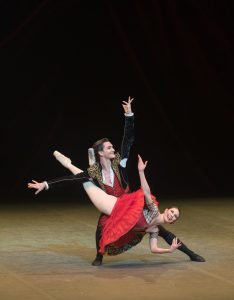 The first act was concluded by the pas de deux from Don Quixote  by Maria Alexandrova and Vladislav Lantratov of the Bolshoi. This was a sparkling élan vital to Ludwig Minkus’s music. Maria Alexandrova looked very fiery and seductive in her red, black and sparkling gold tutu, playing with her crimson fan as she performed her incredible fouettés.  Be it triple turns en l’air or double cabrioles derrière — they all looked effortless and impeccable in each variation.  Lantratov was also spectacular with his panache, some Spanish bravado, ballon leaps and soft, barely audible landings. 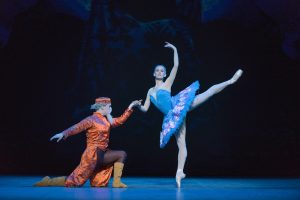 After the interval the Gala resumed with the world premiere of Julian Nicholas MacKay’s Warrior of Light. Seemingly, a commendable attempt to turn back to colour and exuberance of Dyaghilev’s Russian seasons, it still left the viewers somewhat puzzled, although it is difficult to judge of a whole work, still being developed along the way,  by a short extract. Set to a score by Jean-Gabriel Rauynaud and Cedric Baravaglio, and performed by Theatrum Vitae, the descendants of the Khan and MacKay dancing dynasties,  this orientalist fantasy was dedicated to life and art of the Russian painter and theosophist, a leading figure of the Russian Silver Age,  Nicholas Roerich. This might be an apposite idea for a London premiere, as Roerich stayed in London after the 1917 revolution, waiting for his documents, allowing him the passage to the Himalayas. It was also in London that he met and befriended great Indian poet Rabindranath Tagore. The piece demonstrated to the audience consisted of three variations, representing three of Roerich paintings being created by the artist in his studio: Song of the Morning, Dorje the Daring One and Mother of the World. Julian MacKay was impressive as the dancing warrior. The performance was preceded by Roerich’s quote about the beauty: “In beauty we are united, through beauty we pray, with beauty we conquer.” Overall, the piece left us feeling ambivalent: on the one hand, it is an interesting idea worth the effort, on the other hand – the result seemed somewhat pale despite the stunning costumes. One should wait for the whole full-length ballet to appear in 2019 before passing the final judgement. 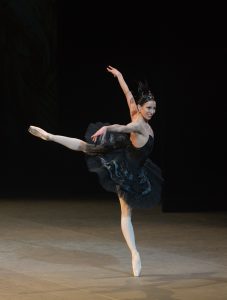 The evening then took off with the Black Swan pas de deux from the Swan Lake where Viktoria Tereshkina from the Mariinsky held the viewers spellbound outshining Xander Parish onstage. Tereshkina’s hands were magnificent, her  tours de la salle and fouettés were light and effortless and somewhat superhuman.

The theme of a swan was continued further by Ricardo Cue’s The Swan, danced by Sergio Bernal, representing the Ballet Nacional de España. The performance started with the howls of wind over the frozen lake, giving way to the sounds of  Saint-Saëns and The Dying Swan. It was a fantastic idea, and danced very convincingly, but it failed to impress as much as it could. The opening was brilliant but it was a challenge to beat the set of clichés associated with the whole tradition of female performances from Pavlova onwards. Perhaps, it would be much better to set the dance to a totally different music and make it into an independent contemporary piece. The fact that it followed the brilliant Black Swan performed by Viktoria Tereshkina and Xander Parish also failed to do it justice. 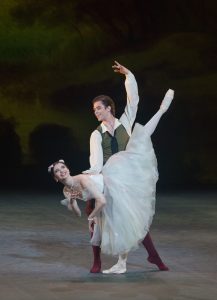 The gravity and tragic mood of the Swan gave way to the light and airy scene from La Sylphide, as  James (Artem Ovcharenko) was being bewitched by the skittish and mischievous fairy, performed by Anna Tikhomirova, both dancers of the Bolshoi Ballet.  Tikhomirova was an enchanting, expressive and butterfly-like sylph. Artem Ovcharenko also impressed with his soft cat-like landings, impeccable batterie and effortless leaps. 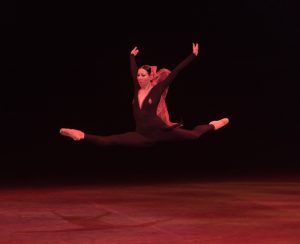 Viktoria Tereshkina in the Legend of Love @Marc Haegeman

The next entrance made by the stunning Vikotira Tereshkina was int he Legend of Love by Yuri Grigorovich. She was dancing with Vladimir Shklyarov instead of Natalia Osipova, who could not make it to the Gala. Tereshkina was simultaneously sensual and ethereal in the role of Mehmene Banu. We could only reiterate the wish of other critics to show the whole ballet on London stage during one of the Mariinsky’s seasons in London. 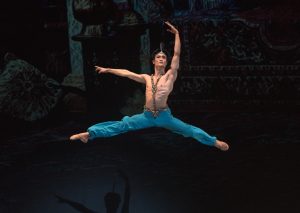 The evening ended with another spectacular performance to match Alexandrova and Lantratov’s: the pas de deux from Petipa’s Le Corsaire. A Mariinsky’s soloist Kimin Kim danced in partnership with  the Bolshoi’s Ekaterina Krysanova.  Kimin Kim was truly spectacular in the role of Le Corsaire, with his jumps defying all laws of gravity and reminding of legendary Nijinsky’s perfomances, when he seemingly hang in the air when jumping. It was a terrible nuisance that the stage was so slippery (Kimin Kim was not the first to slip on the surface during the Gala), that the dancer fell while performing his jump. Luckily, he proceeded undaunted while Krysanova continued with her   fouettés with verve and vivaciousness. Still, half the audience held their breath for Kim, hoping he would end up safe and sound after performing on apparently hazardous surface. Hopefully, next time this issue will be resolved.

We understand that it is not an easy task to keep up with the audience demands and keep the programme interesting and varied. The Russian Ballet Icons Gala seems to be going from strength to strength with each new year, and we hope, its significance and impact will only grow, helping to establish and further maintain cultural bridges between the UK and Russia.