You know that rumbling feeling, when you feel a bit of an idiot? Maybe you don’t? Maybe you lack the qualities of self-deprecation required to reach full-confessional status? The advantage of being a sub-standard hack is that, out there, is a New World, a world of the internet where you can bare all. I’m pretty sure I despise this world, its all too showy, too needy for the reserved person but it has one advantage – you can be the first to admit that your every prediction was wrong. 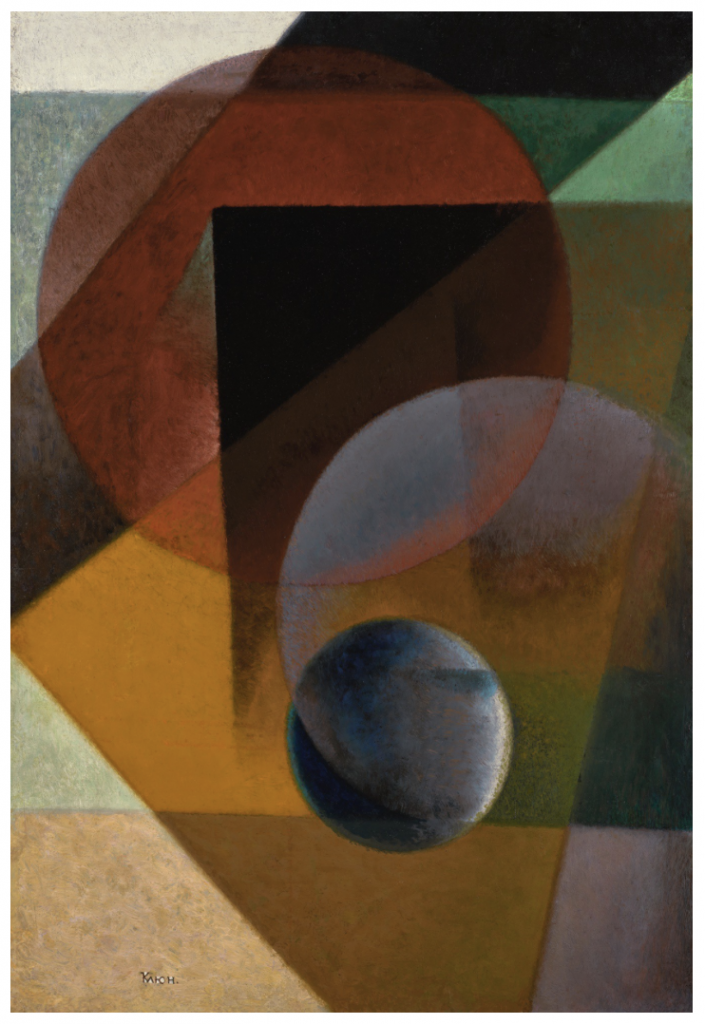 Firstly the star of lot of Russian Art Week, the Kliun fizzled and spluttered its way to £4.1 hammer price when I had predicted more. I was asked why it failed to hit the heights and chose to bite my tongue. It’s an infinitely more important painting than Kuzma Petrov Vodkin that soared at Christies in June, it’s braver too and Kliun is second only to Malevich. Why? The only reason is the one given by Russian colleagues who shared my surprise – it’s not a realist painting and Russians have yet to achieve the level of sophistication in their buying habits as have Westerners. A harsh comment.  But fair?

Overall figures, which now take in the book sale at Christies were, actually, up on June but I am not sure this is a fair yardstick and would require more in-depth analysis than my paycheck allows. Perhaps an overall lot count would help with a ratio of average prices? After all, we are all so busy fact-checking these days, but I am not sure this helps. I think it’s the overall feeling that counts, the overall state of the market. 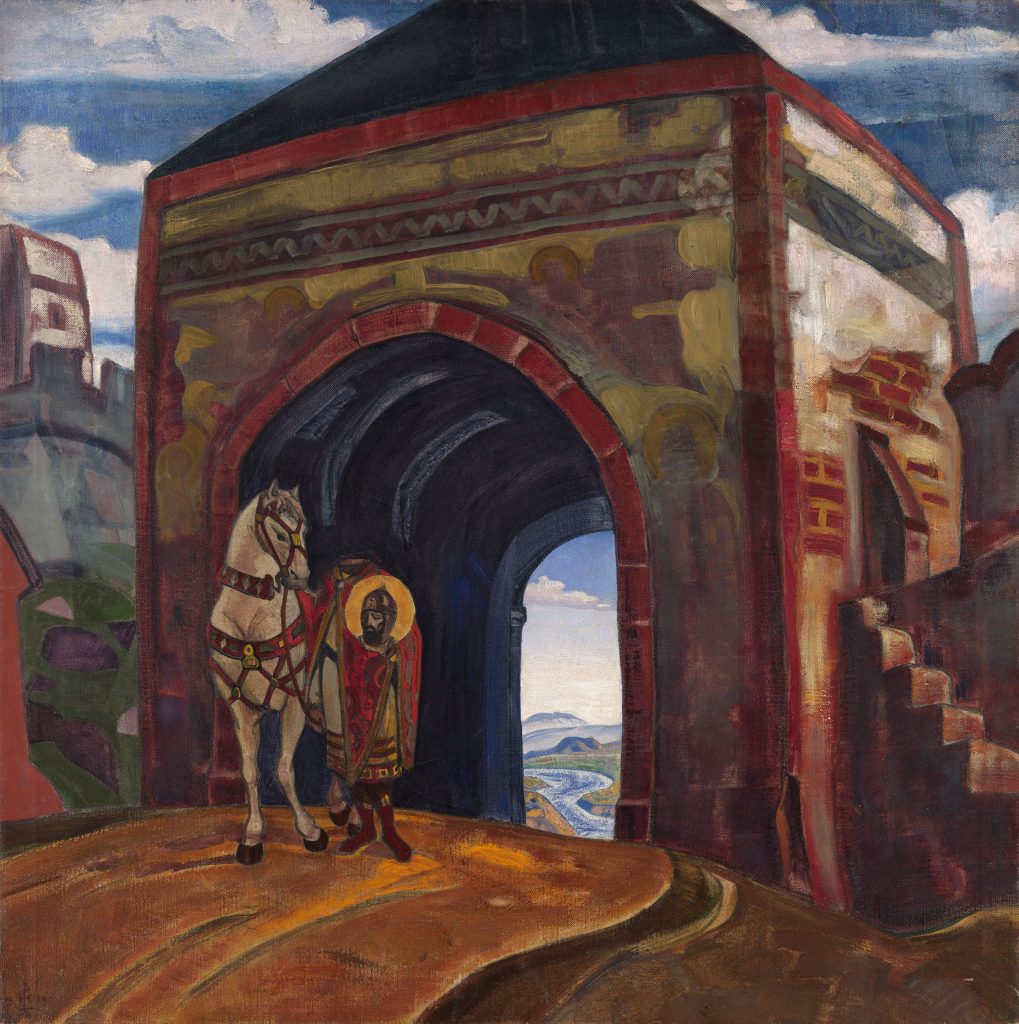 Firstly, and very much against all my pathetic predictions, some top lots did not sell and, the book sale aside where items offered at £5-8,000 flew to £195,000, there was no lot that screamed into the cosmos laying waste all before it. The feeling, at least to me, is one of stagnation, the lights gradually fading, optimism waning and Leonid Illich Brezhnev on the telly boring us all rigid with his tales of equality whilst all the time adding to his Rolls Royce collection. You know the period of stagnation must end, but when?

Beginning with Christies, results for paintings 5/10, results for works of art an impressive 9. Christies opening party, by the way, if you like a cheese and tortilla wrap, is a must, but their auction showed a mixed bag of results. The major Roerich’s work The Call of the Sun, very much against my pathetic predictions, did not sell whereas a painting that had been up before many times, St Mercurius of Smolensk managed a respectable £310,000 give or take. The vase of the Arctic wastes also failed to meet its reserve though, in my defence (I had very much lauded it pre-sale), it was nothing like as impressive in the raw.

Christie’s works of art really flew. Of 245 lots only 58 were unsold, I do not have the post-sales figures available which might increase this figure, which is a very impressive 77%. 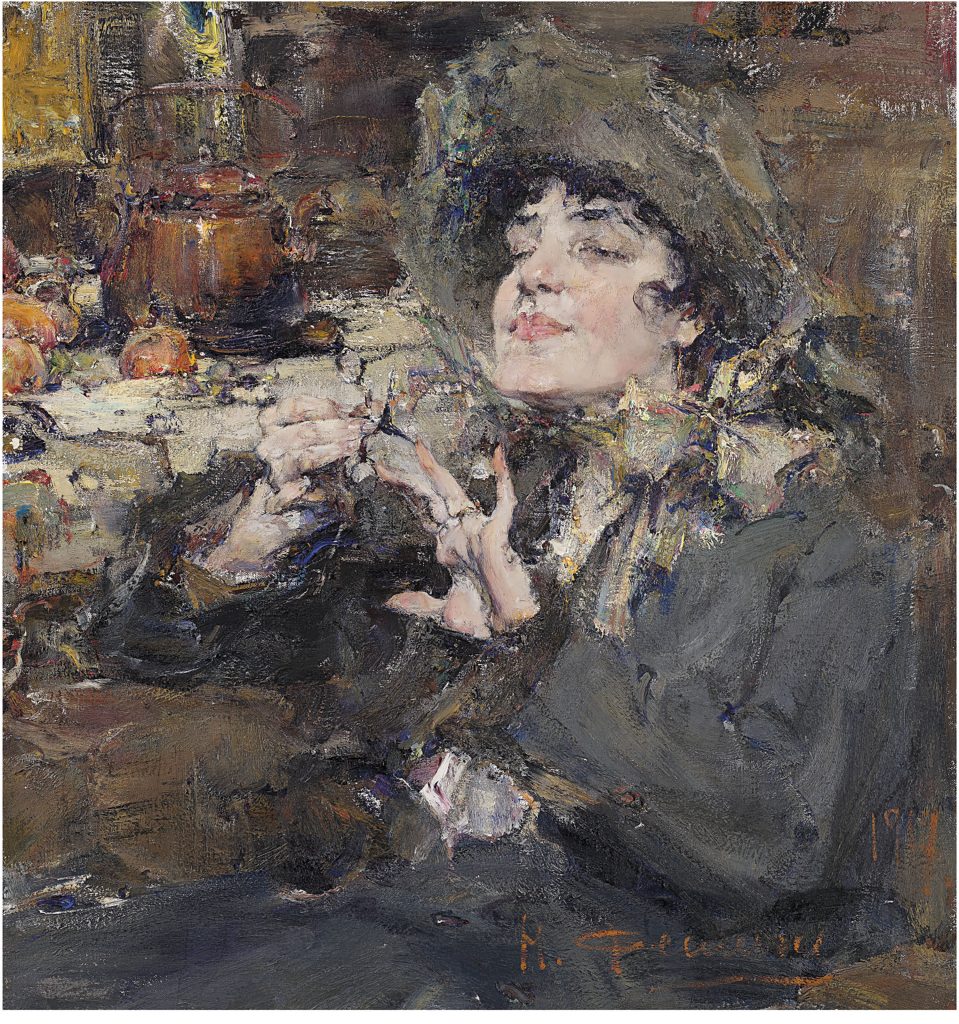 Thus Sotheby’s star lot – Kliun’s Spherical Suprematism – sold and, oh dearly and best beloved, it sold above upper estimate. This public platform also has the benefit of my being able to congratulate whoever-bought-it on acquiring a stone-cold bargain. Ave buyer, ave te salutant! 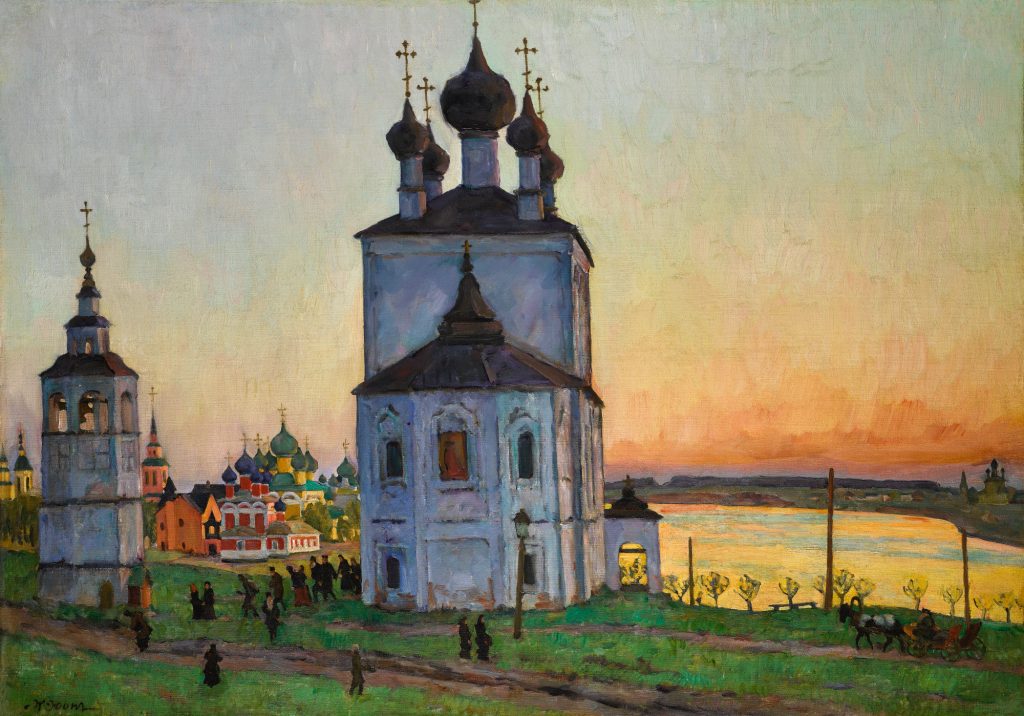 Sotheby’s sale is fronted, as many of you know, by a peer of the realm whom I am proud to call friend. Mark Poltimore is one of those people who is just as nice in person as he is whilst declaiming on the stand.  His positivity and sense of humour are infectious but even he could be seen sighing at the failure of the first few lots to sell.

Things picked up however, the soupy Yuon’s landscape The Ancient Town of Uglich achieved a very respectable £1,100,000 hammer. Only 48 out of 159 lots failed to sell. Worthy of mention are the excellent Konchalovsky’s Portrait of Levon Bunatian which soared to £855,000 on a £300-500 estimate, the Larionov still life which, whilst excellent, was a slightly ‘difficult’ painting and two later Grigoriev’s, one of a cellist that, for reasons known only to those who have made a life studying the insane, went for ten times its lower estimate. 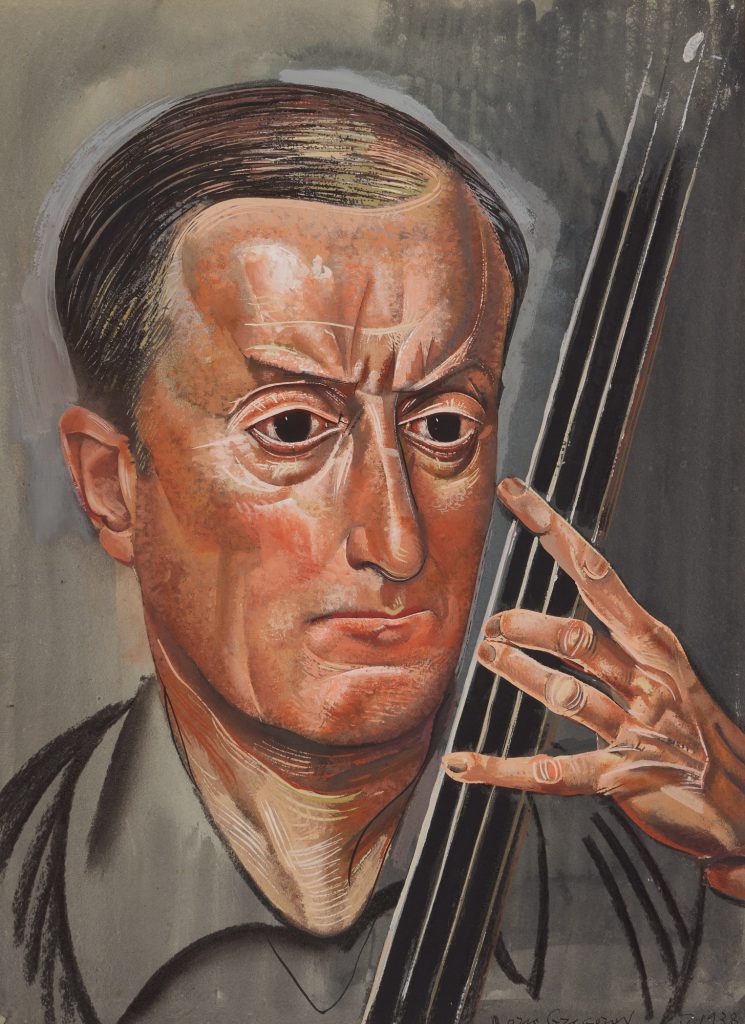 At the other end of the scale was a collection of 52 drawings by Briullov which, even in 2009 would have soared, such is their rarity and importance, but failed to find a buyer on an attractive estimate. 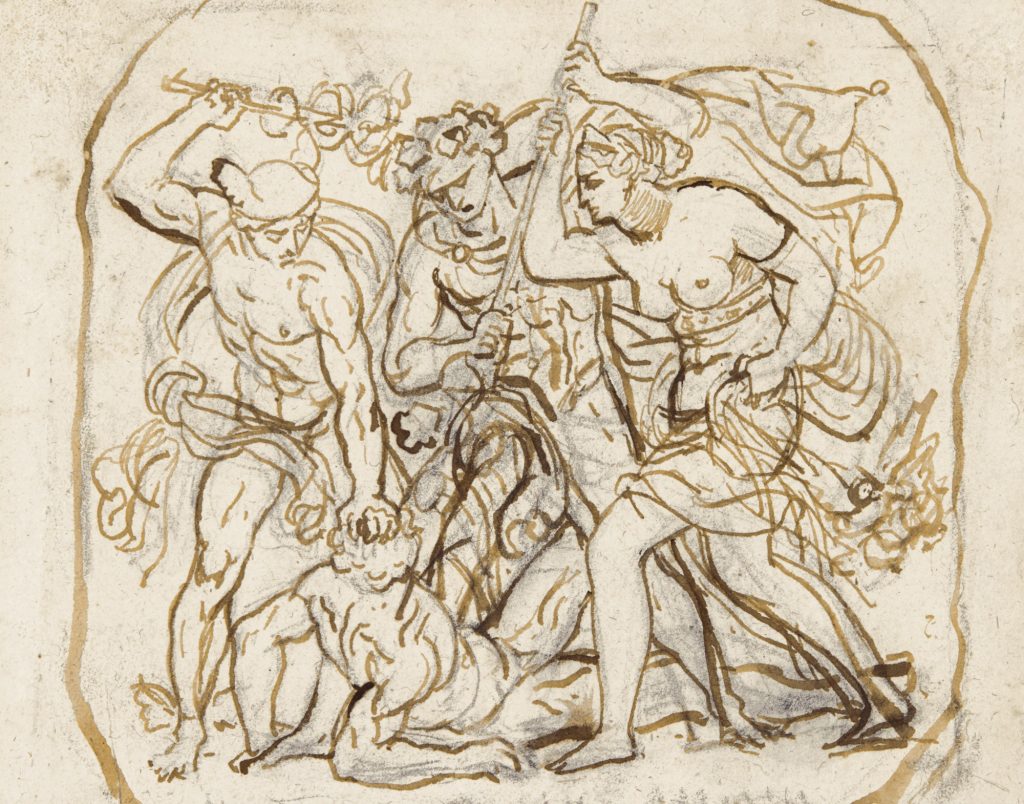 KARL PAVLOVICH BRIULLOV, A COLLECTION OF 52 DRAWINGS AND SKETCHES, SOME OF WHICH DOUBLE-SIDED. Estimate: 40,000 – 60,000 GBP Unsold

Bonhams’ sale was something of a curate’s egg. The early Goncharova, frankly as dull-as-ditchwater, fetched £250,000 with premium whilst the Larionov, ‘Tête de jeune fille’, went for £25,000. 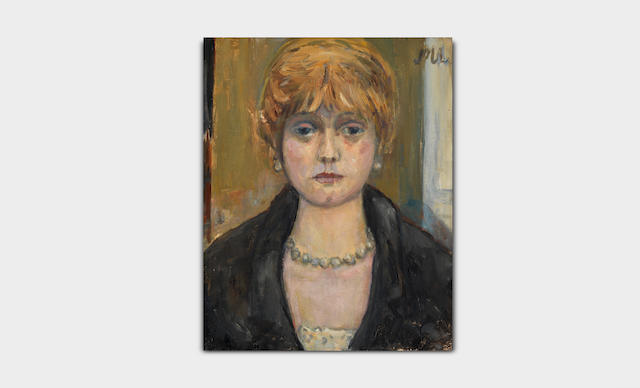 Macdougalls results for non-conformist art were very impressive and, if this market does make its long-awaited comeback, it is to the Macky D’s to whom we should doff our caps. With 124 lots on the stand they managed to sell, an impressive 50% which must be the highest percentage figures of a sale devoted solely to this period of art, Sotheby’s recent New York auction aside, for many years. 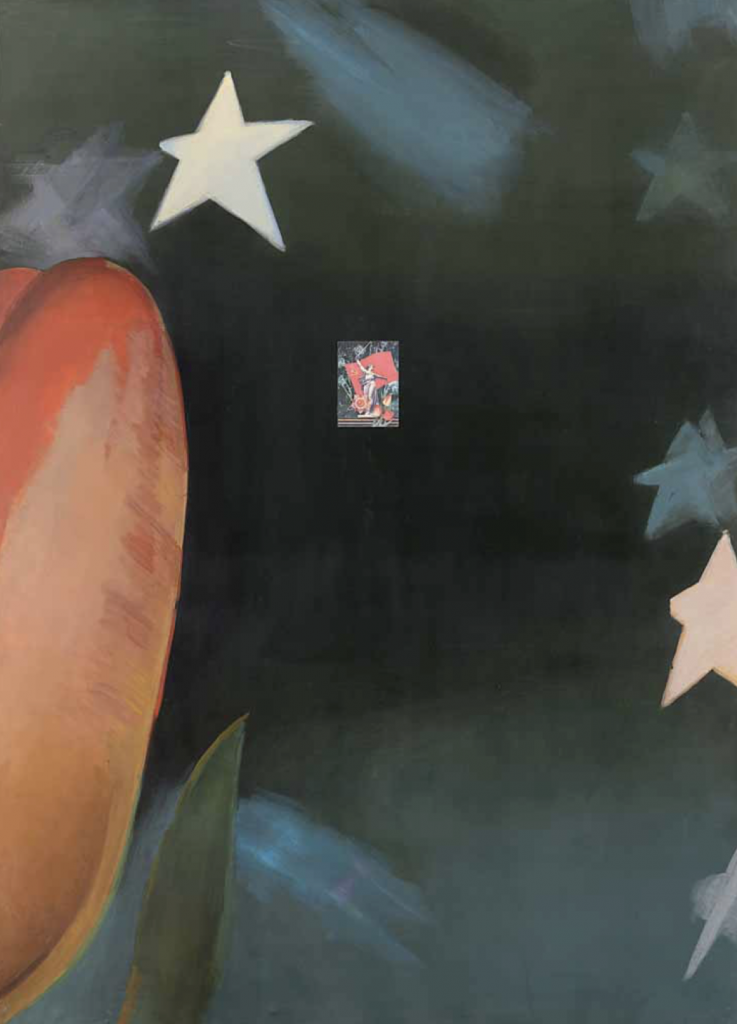 Macdougalls main auction also has the curate’s egg epithet attached. They believe in getting in the numbers, getting volume into the market and selling thereof. Their catalogues are excellent and they present themselves and the work well. Their PR is the best, and there is a buzz about their new headquarters in Asia House. Whilst I was there the place was heaving with potential buyers and, for the first time in many years, I tried to buy twin gouaches at their sale. Failed.

Their sales results, taking into account their policy of selling large numbers seemed to pay off well this time with a higher than average sales figure of 44% among which was the outstanding sale of Goncharova’s L’Espagnole. Despite my pre-sale fears that the painting carried too high an estimate, our Spanish friend sailed through at £950,000 including buyers commission. This sits well with similar prices at their main rivals and must represent the outstanding sale of Russian Art Week.