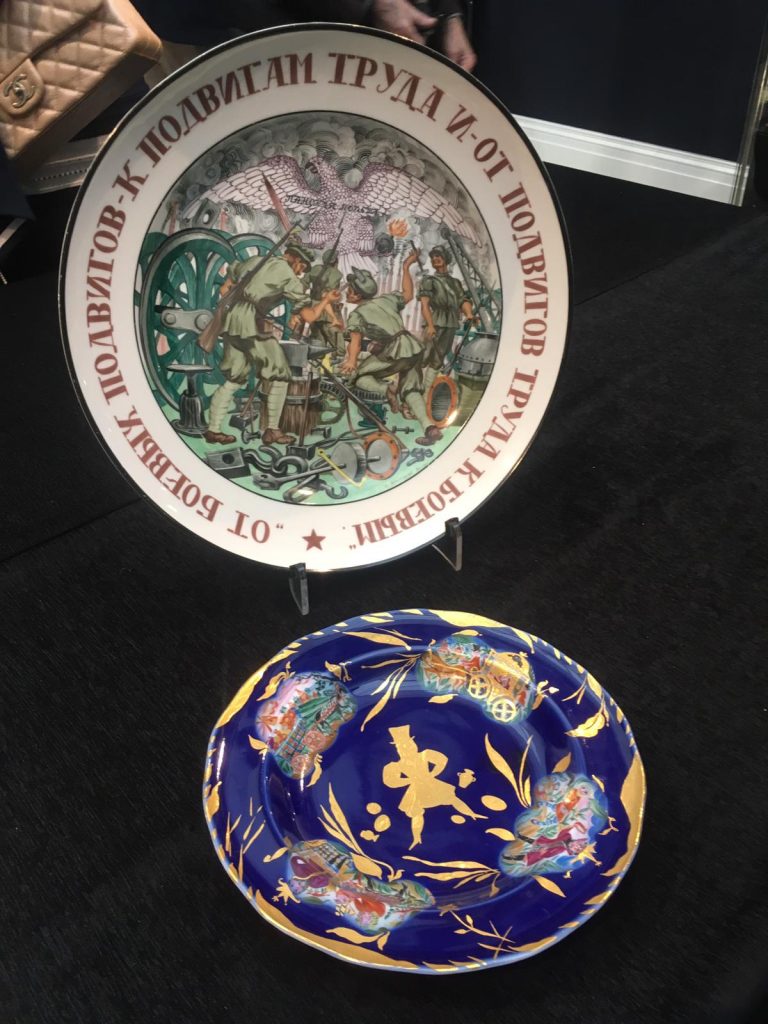 The first thing to say about this particular plate is its size, it’s absolutely enormous. It was produced in an Imperial porcelain factory in Russia, it would have been originally conceived as huge platter for a large imperial service. After the revolution, those plates remained in the factories and were reused by the artists of the Soviet state. The great thing about the size is that it enables the artist to create this amazing painting, it is a blank canvas to produce this very detailed image.

It relates to a historical conflict during the time of the Soviet-Polish War of 1919-1921. We see around the border of the plate a slogan – very typical in early Soviet porcelain and it’s so fantastically innovative, because nowadays we are used to ceramics, plates and cups being with lots of slogans and letters around them, but at that time it’s not something you would have seen at all. This slogan says: ‘From feats of labour to feats of war, and from feats of war to feats of labour’. It really express that ‘Let’s keep going’ spirit of the time of the Civil War brought about a lot of starvation – an incredibly terrific and chaotic time in Russian history. 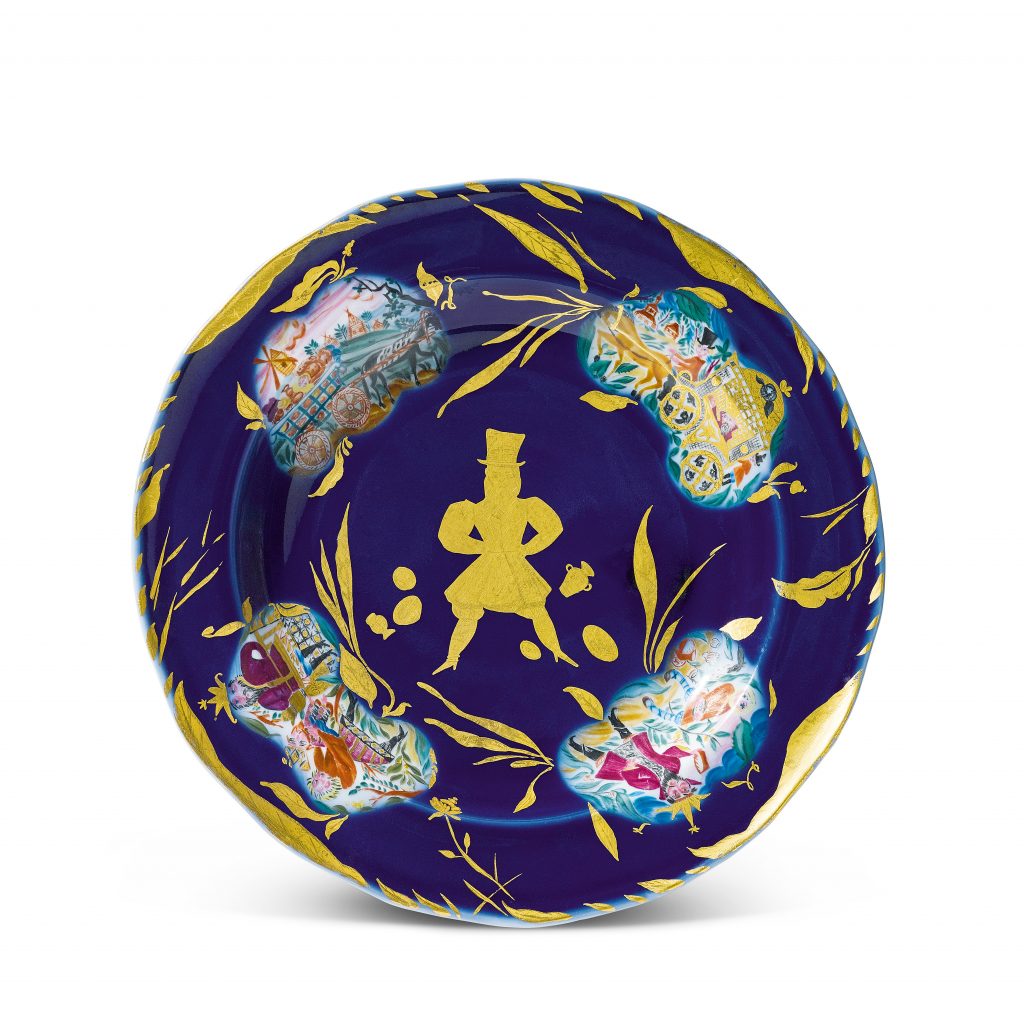 From a rather serious historical plate, to something quite different, and produced by a very different designer a few years later – Alexandra Shekatikhina-Pototskaya.

This is one of my favourite plates in the sale, it’s got this beautiful blue cobalt ground and you can see how this gilding, this beautiful golden colour shines out against this blue background. We have little vignette taken from the Russian folklore, scenes in the countryside with horse and cart. It’s a really joyous plate.

Shekatikhina-Pototskaya’s grand-father was an icon painter and you can see a little bit of influences of that in her work.

If I turn it around, you can see on the reverse, it has two marks. One here for the Imperial porcelain manufacture of Nicolas II. And this is mark has been put on later, following the revolution, we can see a hammer and a sickle, characteristic of a Soviet cypher.

It’s a fabulous plate, works by this artist are in huge demand today. We sold one in the last sale for over a 100.000£, six-figures sums for a very rare, very collectable plate.

Then Reto Barmettler talked us through some of Russian paintings in the preview. 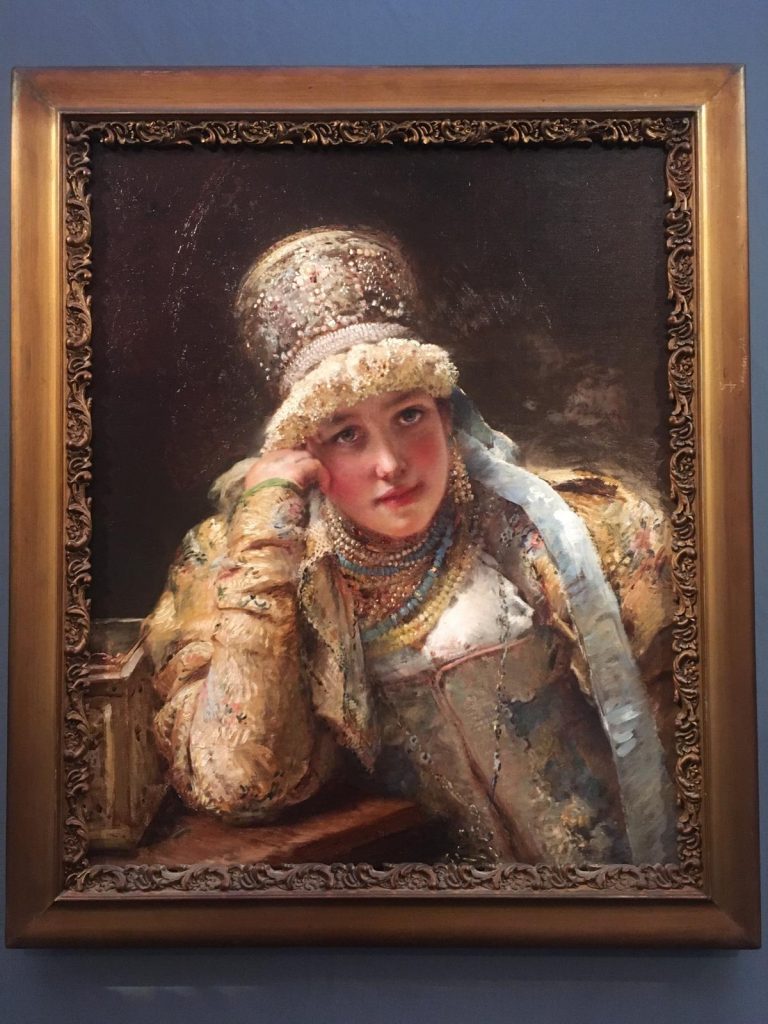 This lovely portrait by Makovsky is very very Russian. In the late 1890s-early 20thcentury there was a fashion in Russia for the period before Peter the Great came to power. There was a revival of the times of the Boyars in architecture. And for example, probably everyone knows the photographs of the Tsar Nicolas the II and his wife dressed up as Boyars. You might also remember that we had a large Makovski on the cover last November, which also was the same subject but a multi-figure composition, which did incredibly well and sold for over 4,3 million. This is much more conservative, it’s a much smaller picture, it’s estimated at 80.000£ but I think it should do much more. Interesting rediscovery, it was found in a private collection in the United States. When we first saw it, it was completely covered in dirt, old layers of discoloured varnish, so you could hardly see what was going on. And when we started cleaning, this lovely woman with her rich dress and jewellery appeared, and she has become the face of the sale.

Aivazovsky remains one of the most popular artists among Russian collectors, and he was highly prolific as well, so it’s somebody we come across quite a lot. But what’s exceptional this time is that we have four large paintings by him, all of exceptional quality, and actually quite early as well, which is rare, so the majority of works we see on the market are from the 1880s-1890s. We have two works from the 1850s, one from the 1860s and one from the 80s. And they’re all very different as well – we’ll start of with this one from 1859, probably what many collectors really want from an Aivazovsky – beautiful sunset, a ship setting out, the beautiful transparent waves which Aivazovsky was so famous for. This piece is exceptional because it’s in very, very good condition, it’s an unlined original canvas, very little restoration, it has recently been cleaned, but that’s really everything.The works from the 50s are just much, much more detailed than many of the later works. You can see this built-up coastline and a lot of ships here. It’s really just a beautiful piece in wonderful condition, from the 1850s which is very rare. 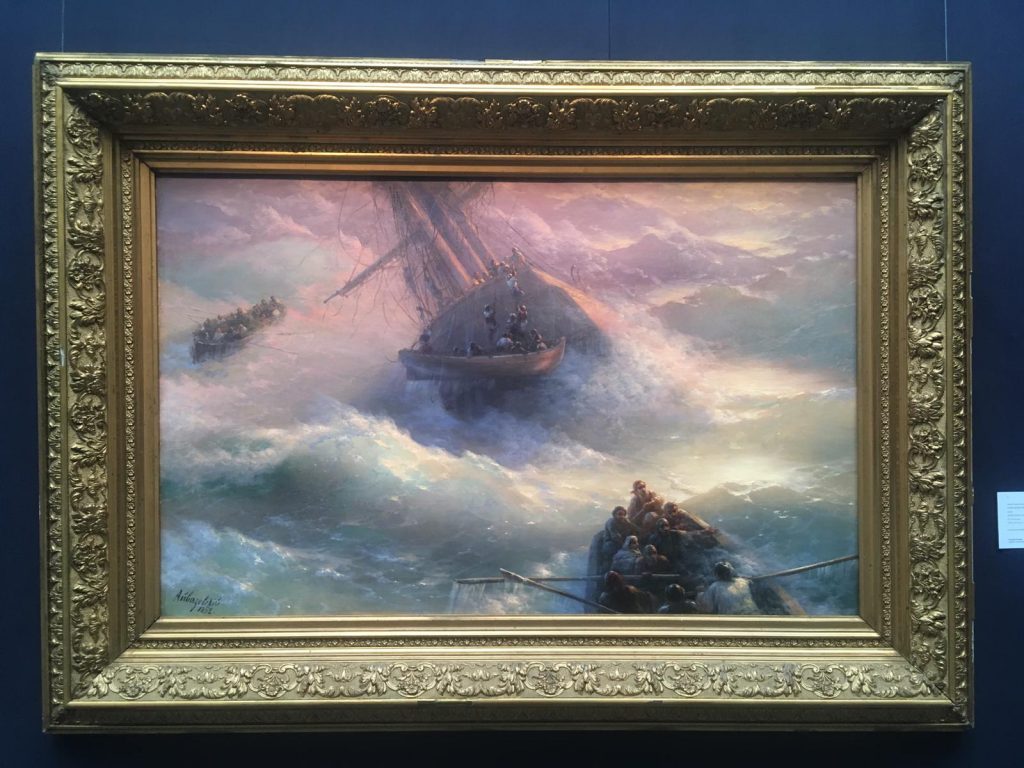 I’ll contrast this work with the next one which is also very, very impressive. This is about 30 years later, 1880s, and this is probably the other work which many collectors are very interested in. It’s stormy seas, full of drama, survivors of a shipwreck, or people trying to come to shore. This one is quite special because it’s a very, very tight crop – you don’t see a horizon, anyway, but you can still see the lines, he was the master of light, Aivazovsky, and you can see how even without a direct source of light you still have all the reflection going all across the waves here, and because of the tight crop you’re really drawn Into this ship that is about to sink and it just has this sense of heightened drama. Again it’s in beautiful condition, it’s original canvas so it has not been lined. It was last sold at auction in the 1980s, so again it hasn’t been on the market for a very long time. 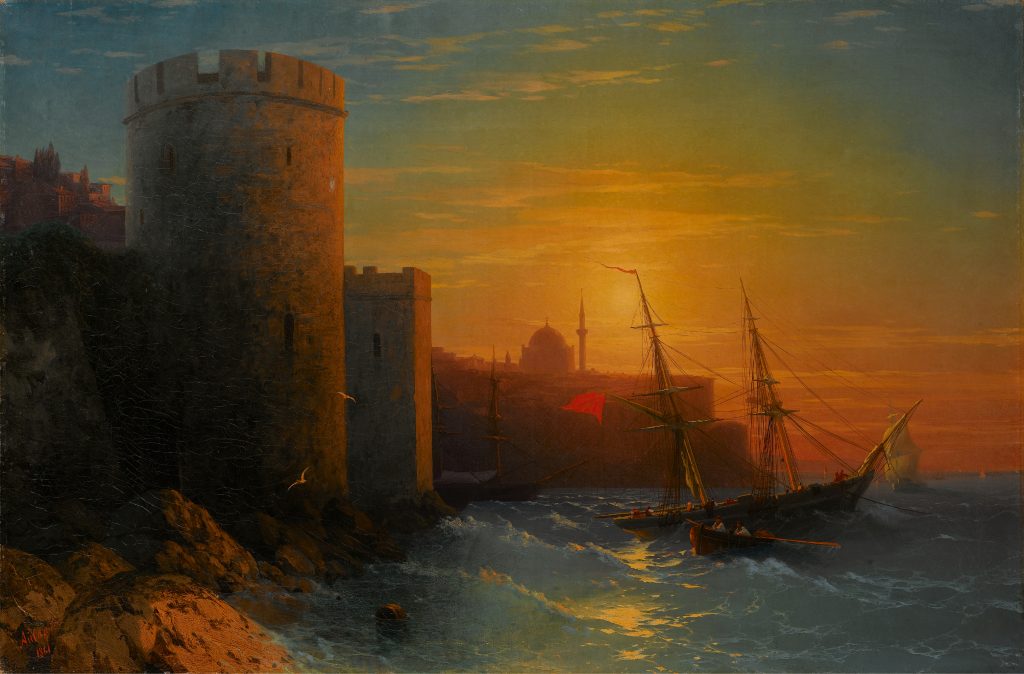 And then we have more of an orientalist picture. Aivazovsky travelled the world, he was in America, he was in the Middle East, he represented Russia at the opening of the Suez Canal in Egypt, but obviously he also spent a lot of time in Turkey, where he is actually very well-known even today, and a number of important works by him are in the public collections in Turkey. So again, it is kind of this orientalist subject that you can find in his work. This is also relatively early, from the 1860s. 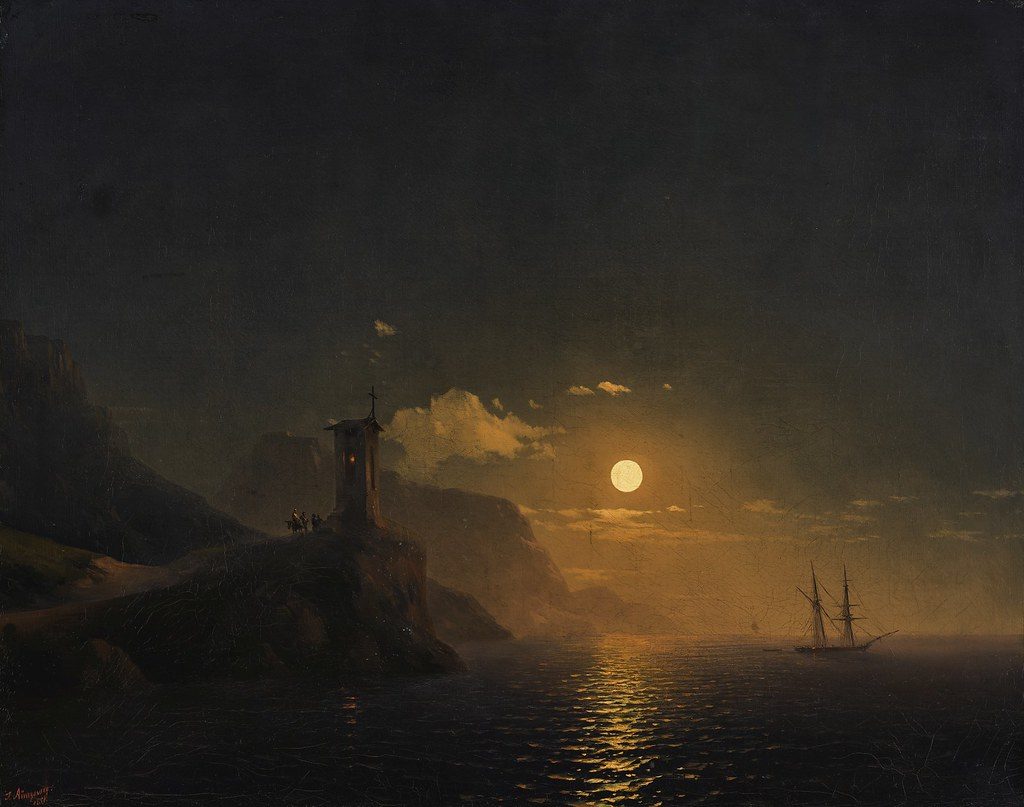 Ivan Aivazovsky. Chapel by the Coast on a Moonlit Night

And then the last one is a beautiful night scene that he managed to paint. We have the beautiful sunset and the reflection of the sunlight on the water which he was so well-known for. But we also have these scenes here, where we have beautiful moonlight, and a sky which is beautifully lit by the moon and we have the reflections on the water. Again a work which is very early, it’s from 1851, and it was acquired in the early 20th century in Petersburg by a Norwegian businessman and has remained in the same family in Norway ever since. So again, an interesting rediscovery.

So altogether we have four very different Aivazovskys. 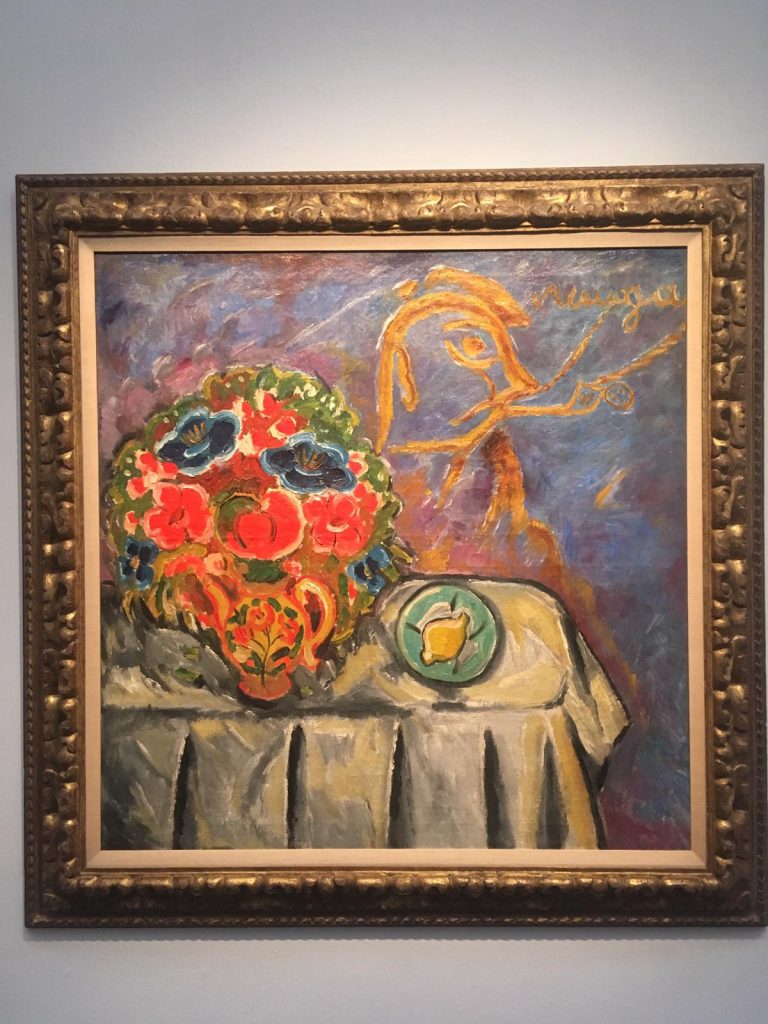 Our cover lot this time is this large painting by Mikhail Larionov, dating from approximately the 1910s, a really rare piece to be able to offer, and also quite interesting for anyone interested in Russian art in general as this work hasn’t been seen in public since the late 1960s, when it was exhibited in a gallery in New York. Before that, it was in possession of the artist, but it is very interesting that there are two small handwritten labels on the reverse, which were really quite a surprise for the people that discovered it because it really proves the interesting provenance and history this painting has. We know it was painted in the early 1910s, probably exhibited at the time in Russia. Difficult to know with any certainty, because obviously any exhibition catalogues at the time were much more basic than you would expect today. Basically those two little labels show that the painting was stored at the Moscow Depository for Contemporary Art, which was founded after the revolution. What happened was that Larionov and Goncharova left Russia in 1915 to join Diaghilev [art critic and Ballets Russes founder] to work with him. Because of the war and the revolution they weren’t able to go back to Russia. The works they had there, they had to leave behind. So after the revolution the works were bought by the new state put into public collections but the bulk of it was stored, and that’s what these two little labels refer to. Both artists were only reunited with the work from that period in the 1920s, when they managed to get them out of the Soviet Union into Paris, where they had settled. And then afterwards, this particular work stayed with the artist after his death and it was his widow then who sold it. It’s been in the same collection since it was bought in 1968, it’s for the first time that it is now accessible for the public. It’s available for sale – the estimate is £1 million– £1.5 million, which is, given previous results for Larionov works from that period, and given the impressive size here (approx. 1mx1m), actually quite conservative.And it has so many hallmarks of a Larionov of that period – the face on the background, the writing (which you see in some of his best works from the soldier series at the Tretyakov for example), the lemon which you find in other works as well, and quite an unusually decorative style. 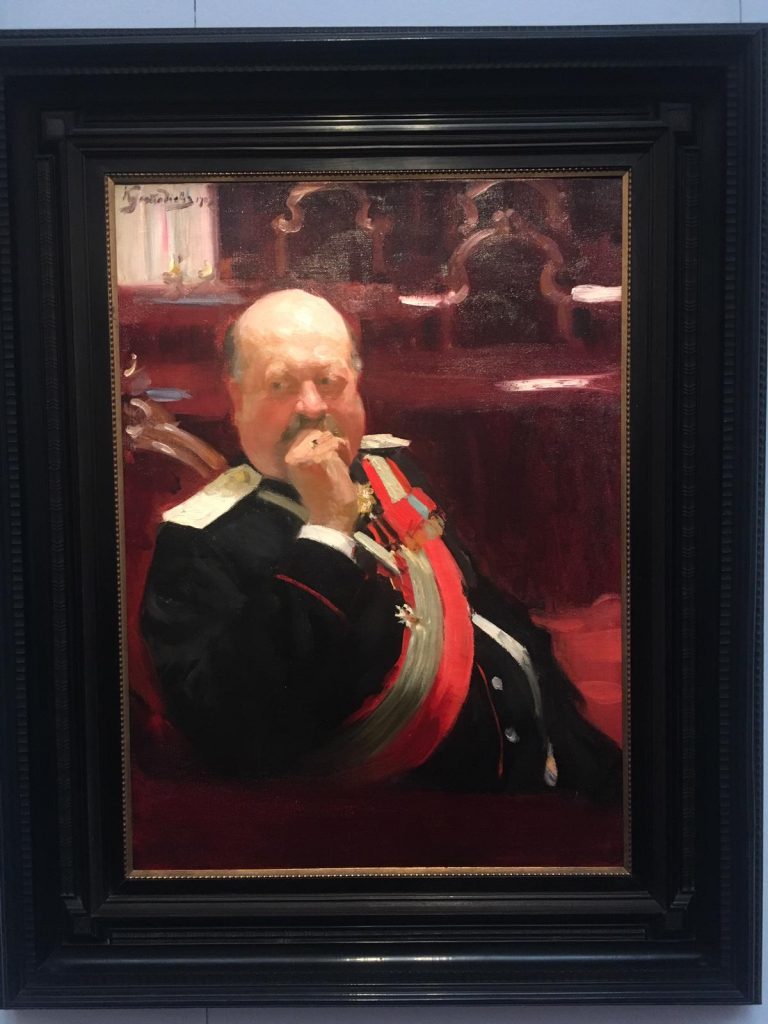 Another very interesting work we have for sale is this painting by Kustodiev. This work might be quite recognisable to many people, many people have actually thought that this is by Repin and they’re not necessarily wrong. Kustodiev worked together with Repin on an art commission that had been received in 1901, which was the Ceremonial Meeting of the State Council painting to celebrate 100 years since the founding of the State Council in Russia. Obviously the task was huge, to paint more than 80 individual portraits of the members of the State Council, and every member there is a study for, really, and Repin couldn’t do that all himself. So he hired two of his most talented students, one was Kustodiev and the other was Kulikov (?) to work with him on this commission. The finished painting by Repin is currently at the Repin exhibition at the New Tretyakov in Moscow – it’s really one of the highlights of the exhibition, it’s the far end of the gallery, overshadowing everything else just because of its sheer size. Even so, I think we should look at this as just a study for another painting, because this painting has a history of its own. It was shown at multiple exhibitions in the early 20thcentury, including at the 1907 Venice Biennale. It is offered at auction for the very first time – the estimate is £250,000-350,000.