This autumn Sotheby’s are offering a range of events during the Russian art week. Their sales will present an unseen collection of non-conformist Soviet Art from the 60s, 70s & 80s, one of the largest & most valuable Fabergé flower studies, one of the earliest-known still lifes by Petrov-Vodkin, jewels with a Romanov Inheritance and much more. You will be able to view these at a special exhibition in New Bond Street from 26 November ahead of auctions on 30 November & 1 December.

A TREASURE TROVE OF NON-CONFORMIST ART

In the second half of the 1950s – following the death of Stalin – the Soviet Union saw a period of cultural re-examination and a degree of liberalisation known as the ‘Thaw’. For the first time, artists were able to see works from outside of the country – with a Picasso retrospective opening at the Pushkin Museum in Moscow in 1956 and examples of American abstract expressionism on view the following year. After years of conservatism and state-imposed Socialist Realism, a young generation of artists were given the opportunity to explore contemporary culture in an entirely new way.

This exceptional private collection – put together over a decade ago with an unerring focus on quality, importance and rarity – is without doubt one of the most impressive of its kind outside of Russia. Together, the collection – which has never been exhibited before – offers a rare survey of this new wave of the Russian avant-garde. The dedicated auction will take place on 1 December (view full catalogue here).

The star lot of the sale is Erik Bulatov’s monumental Sky and Sea from 1985 (est. £600,000-800,000, illustrated above left), a quintessential example of the legendary artist’s late Soviet period that visually embodies the main theoretical questions he addressed. The letters command the viewer’s gaze initially, but then the vision gradually shifts to allow an escape into nature and eternity. Sky and Sea was included in Bulatov’s first exhibition outside the Soviet Union, in Zurich in 1988, and later travelled to France, the UK and the USA. It has been exhibited on numerous occasions since then, including the artist’s major retrospective at the State Tretyakov Gallery in Moscow in 2006.

Further highlights include two works by Ilya Kabakov from the renowned Ten Characters series. The first is The Flying Komarov – The Complete Album of 32 Original Drawings (est. £150,000-200,000) – the only complete album ever to come to auction (having previously been sold at Sotheby’s New York in 2008). Informed by his official job as a book illustrator, the work combines elements of literature, art and post-war Soviet popular culture, with his characters striving to elevate themselves above the mundane constraints of Soviet reality. The auction also offers one of his conceptual installations, The Composer (est. £250,000-350,000). This work formed part of his first large-scale installation which he exhibited in New York in 1988. 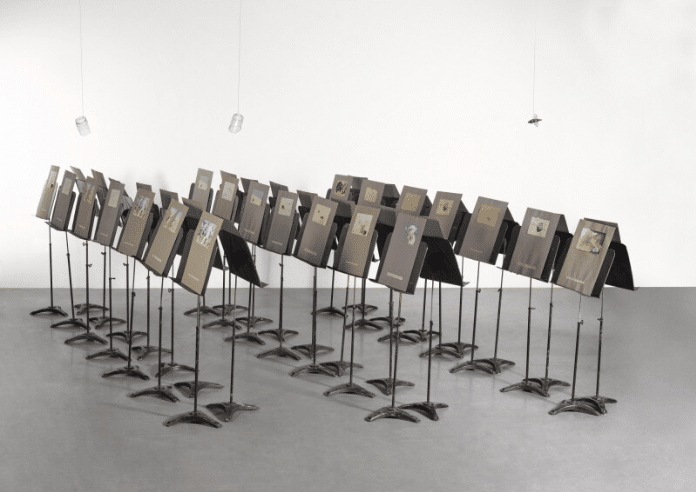 Among the offering are also several works impressive works by Oleg Tselkov, who was a key member of the non-official art scene, spanning four decades of his oeuvre, led by Boy with Balloons, 1957 (est. £150,000-200,000) – one of the few surviving oils from his earliest period. 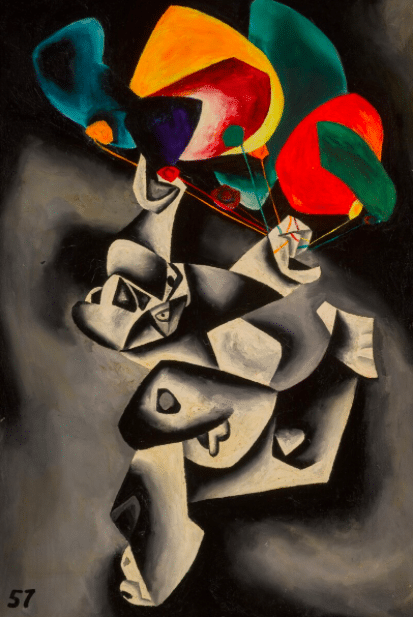 The Russian Pictures auction on 30 November (view full catalogue here) will be led by Kuzma Petrov-Vodkin’s Still Life with Apples (est. £2,500,000 -3,500,000, illustrated on p.1), an important still life by one of the leading lights of Russian 20th-century art, painted at the same time as his iconic masterpiece Bathing of a Red Horse. The composition hints that the artist has begun to develop his signature style: slanting perspective so that the table tilts slightly to the left and the apples appear weightless; adding the sketch of the horse with its gaze turned toward the viewer; creating several viewpoints within the frame. It was one of nine works by the artist exhibited at the Baltic Exhibition in Malmö and was given to Soviet sculptor and former student of the artist Boris Evseevich Kaplyansky. 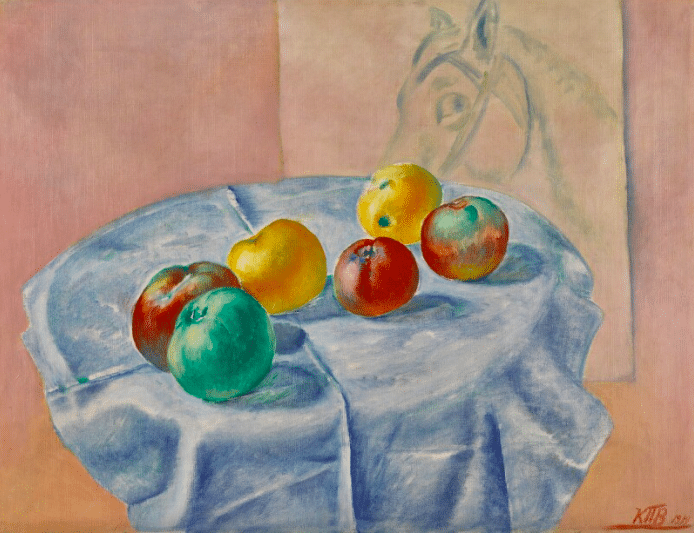 During the summer of 1912 Petrov-Vodkin and his wife Maria were staying at the estate of General Petr Grekov, at the invitation of the General’s daughter, who was at the time a student of Petrov-Vodkin. It was during this stay that the artists entered into a period of great activity, making sketches and studies of Bathing of a Red Horse, for which the General’s horse Malchik served as the model. In a letter to his mother, Petrov-Vodkin wrote that in the General’s garden, apples were ‘the size of watermelons’ – and it is these apples that appear in this work.

The sale also offers a pair of exquisite Italian views in remarkably good condition by Ivan Konstantinovich Aivazovsky (est. £600,000-800,000), depicting memories of a summer spent in Naples. At the age of 27, with Emperor Nicholas I as his patron and protector, Aivazovsky had sold a painting to the Pope, met and been praised by William Turner and had drawn admiring crowds to his exhibition. He reached these lofty heights despite hailing from a poor immigrant family. After a series of travels, he returned to Russia in June 1844 as a hero; this pair of pictures was painted at exactly this time, upon his return to St Petersburg. 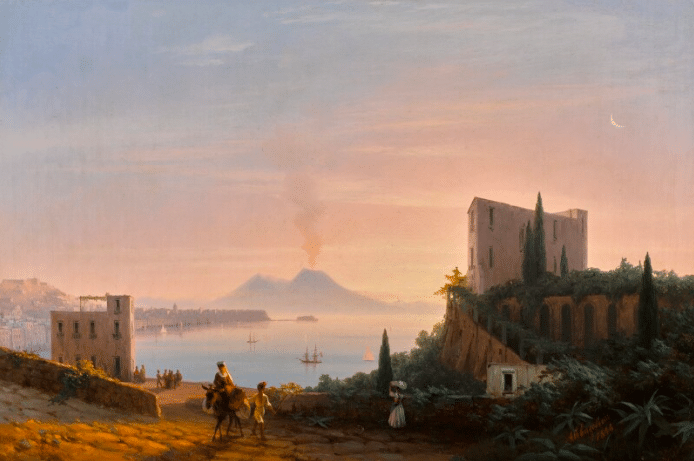 Lot 5. Ivan Konstantinovich Aivazovsky. A Pair of Southern Italian Views: View of the Gulf of Naples from Posilippo with the Palazzo Donn’Anna, New Moon and a View of the Bay of Pozzuoli on a Moonlit Night, with the Islands of Nisida and Ischia in the Background, Full Moon

Renowned painter Konstantin Makovsky was unrivalled for his striking portraits of high society beauties. This extremely personal portrait depicts Maria Matavtina, Makovsky’s last muse, who at the time of the work was his clandestine lover but went on to become his third wife. This work, titled Maria Matavtina Reclining (est. £200,000-300,000), has remained in the artist’s family since it was painted in 1892, hung in their Paris apartment until now. Having been painted during a difficult period in the artist’s private life, when his relationship with his second wife was coming to an end, this strikingly tender portrayal underlines the importance of his new relationship. It was this very portrait that Makovsky chose to include in the 25th Itinerant Exhibition held in 1897, exhibited under the ambiguous title Portrait of Madame M.

Two works on paper in the sale are rare depictions of historical events in Russian history. Ilya Efimovich Repin’s The Solar Eclipse (est. £80,000-120,000) captures the moment when Dmitri Mendeleev – best known for his work on the periodic table – ascended in a hot-air balloon in an attempt to observe a solar eclipse in 1887. Both a passionate scientist and patriot, Mendeleev devoted his life to advancing Russian technology, especially in industry and agriculture.

Lot 12. Ilya Efimovich Repin. The Solar Eclipse of 1887, Mendeleev in his Hot-Air Balloon

Dating to the following year, Petr Petrovich Sokolov’s The Borki Train Disaster (est. £80,000-120,000) is a painstakingly detailed artwork that documents the direct aftermath of the derailment of a train that was transporting the Russian Imperial Family on an official trip around the Caucasus, an event that is otherwise only seen in historical photographs and lithographs. 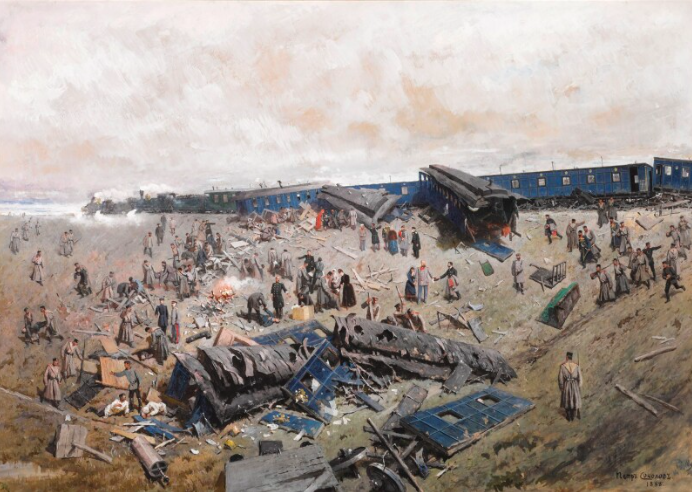 Starring in the Russian Works of Art, Fabergé and Icons sale on 30 November (full catalogue online here) is an historic selection of three Fabergé flower studies including a study of apple blossoms, violets and a pansy – ranging from one of the largest known pieces to an intimate token of affection, they together tell the story of Fabergé’s patronage.

The impressive jewelled enamel, rock crystal and nephrite model of an apple blossom from circa 1900 (est. £150,000-250,000) is one of the most important and largest known Fabergé flower studies outside of the Royal Collection. A scratched inventory number on the rock crystal vase corresponds to a purchase made by four members of the Imperial family from Fabergé’s St Petersburg branch in 1913 for 800 rubles, a figure that ranks among the highest known in all of the account books – the average price for a flower study was around 250-350 rubles. Given its extraordinary price, the recorded flower was possibly a gift for the four family members’ mother, Grand Duchess Maria Pavlovna (1854-1920) – the formidable aunt of Emperor Nicholas II – who had a penchant for Fabergé flowers. 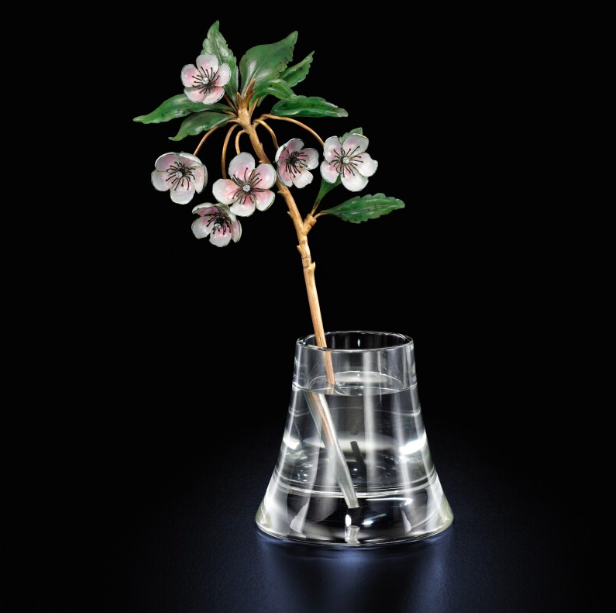 The piece later formed part of the collection of Martha Baird Rockefeller (1895 –1971), wife of John D. Rockefeller, after which it entered the collection of Ana-Inez ‘Chiquita’ Carcano y Morra Astor (1918-1992). This is the first time the exceptional piece has been seen since she acquired it in 1973, with the present owners submitting it for valuation through Sotheby’s Online Pricing Platform.

Coming from St Petersburg to Fabergé’s London branch, is a beautifully delicate model of a violet (est. £250,000-350,000). This flower is symbolic of ‘thoughts occupied with love’ and was purchased from the London branch in 1908 for £32. A wonderful example of the important role that Fabergé played amidst Royal circles in London, this violet echoes the subject of the current exhibition at the Victoria and Albert Museum, Fabergé in London: Romance to Revolution.

The sale also offers jewellery that once belonged to Grand Duchess Maria Pavlovna. Often referred to as ‘The Queen of St Petersburg’, the Grand Duchess was a glittering figure who fought to hold on to the trimmings of splendour during the revolution. In 1917, the situation became so precarious that the Grand Duchess put her affairs in order and moved her belongings for safekeeping. Amongst these items were a Fabergé gold, silver-gilt and guilloché enamel cigarette case (est. £10,000-15,000) and a Fabergé gold and guilloché enamel egg pendant locket (est. £8,000-10,000). These were entrusted to British antiques dealer Albert Stopford, who specialised in Fabergé and Cartier and was an intimate of the Romanovs. Following the Grand Duchess’ death, they were given to Cartier for valuation, who placed them in fitted Cartier cases stamped with the crown of the Royal House of Greece, King of the Hellenes, marking their association with their new owner Princess Elena of Greece and Denmark, formerly known as Grand Duchess Elena Vladimirovna.

Exemplifying the breadth of this auction, a further highlight is a rare and impressive Soviet vase from the Lomonosov State Porcelain Factory in Leningrad, painted in 1932 (est. £20,000-30,000). The body showcases a vibrant composition with a continuous scene of acrobats and dancers vaulting and twirling against a background of abstract and geometric motifs. Strongly reminiscent of the early cubist designs for propaganda porcelain of the early 1920s, this vase is a rare example of Soviet avant-garde visual language surviving into the 1930s. 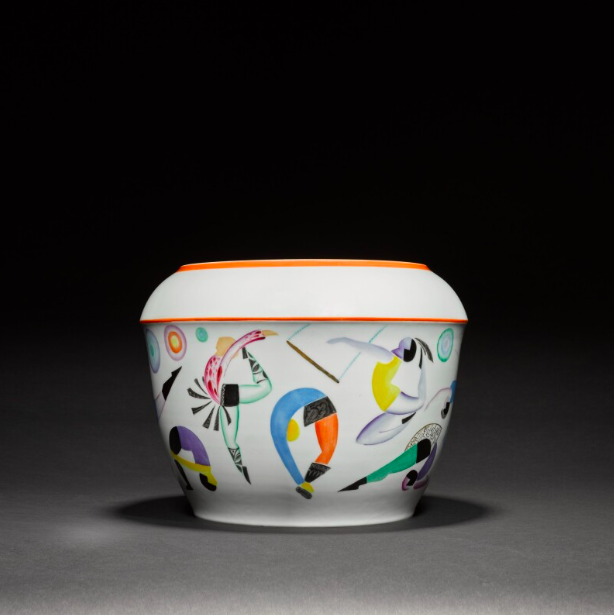