RUSSIAN ART IN THE NEW MILLENNIUM (in English or Russian)

There is surprisingly little, and certainly nothing comprehensive, written about the contemporary Russian scene now. What appear in the West are mostly reports about so-called ‘dissidents’, not about what is happening in this vast culture, taken as a whole. The aim of Russian Art in the New Millennium is not to support any one cause, but to look at the situation as it now exists objectively and to give as wide and truthful a view as possible. 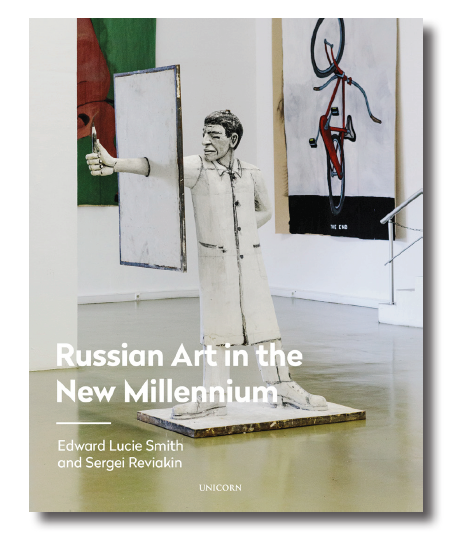 Russian art during the period under review – the last two decades – has been evolving rapidly and in many directions. Hence there are sections on digital art, landscape paintings, graffiti, religious art and others. Furthermore, in addition to the continuing influence of the traditional centres for art – Moscow and St Petersburg – a number of provincial Russian cities have developed distinctive art worlds of their own. Russian Art in the New Millennium attempts to discover this terra incognita and to encompass this extremely various, but also intensely national art scene in Russia in one volume.

Edward Lucie-Smith is generally regarded as one of the most prolific and widely published writers on art. A number of his art books, among them Movements in Art since 1945, Visual Arts of the 20th Century, A Dictionary of Art Terms and Art Today are used as standard texts throughout the world.

Sergei Reviakin is a London-based Russian art authority and collector, and the reference point for all matters concerning the contemporary Russian art scene.