Danish auction house Bruun Rasmussen focuses on the strong Danish-Russian connections with a Live Auction on 7 December. The lots include gifts from a Danish-born Tsaritsa, art from Danish collections, and an impressive silver collection from a Danish Consul General.

The key words in this year’s final auction with paintings and decorative arts from Russia are provenance and quality. Over the past few months, Bruun Rasmussen Auctioneers have been on the lookout for antiques primarily from the Imperial era and hope you’ll enjoy this journey back in Russia’s cultural history.

“I am proud that we once again can present a unique selection of Russian art objects – many with royal and imperial provenances that have never been on the market before. It is also worth pointing out that we are not only selling art objects. We have made a great effort to collect the stories and provenances behind these items, so we are in a also selling history,” says Martin Hans Borg, Head of the Russian department at Bruun Rasmussen.

Denmark and Russia had very close royal connections, and it all started with Christian IX and his wife Queen Louise. After the defeat of Denmark in 1864 and the loss of Schleswig, Holstein and Lauenburg, the population’s trust in the King declined, but the regent couple’s popularity increased over the years – especially due to their six children, who were all married into various European royal houses. This matrimonial stratagem elevated the status of Denmark in the eyes of the people, but it was also a wise diplomatic move because it created strong relations across national borders. Christian IX and Queen Louise were even called “The In-laws of Europe”, and their daughter Princess Dagmar married Alexander III of Russia in 1866 and became known as Tsaritsa Maria Feodorovna.

Bruun Rasmussen has a very curious object with links to both Christian IX and the daughter who’d soon marry a Tsar and move to Russia. It is a Danish medallion with a photo of a very young Princess Dagmar’s engagement photo. Behind the glass on the back is a lock of the princess’ hair, and the medallion would probably have been worn by one of her close relatives maybe even her father, the King. The medallion is valued at €1060 – 1600 (DKK 8,000-12,000).

Two signets with imperial provenance are also in the running to become the most curious lots at this auction – one was owned by Grand Duchess Anastasia Mikhailovna of Russia, the other by her daughter, Queen Alexandrine of Denmark.

The imperial provenances are particularly prominent in the jewellery featured at the auction, which includes a beautiful Art Nouveau tiepin given by Tsaritsa Maria Feodorovna to her father, Christian IX. In the Royal Family, she went by the name Minny, and in the accompanying box, there is a neatly written note bearing the words “Min Engle Papa fra Minny” (My Angel Papa from Minny). The estimated price is €3,350-4,050 (DKK 25,000-30,000). 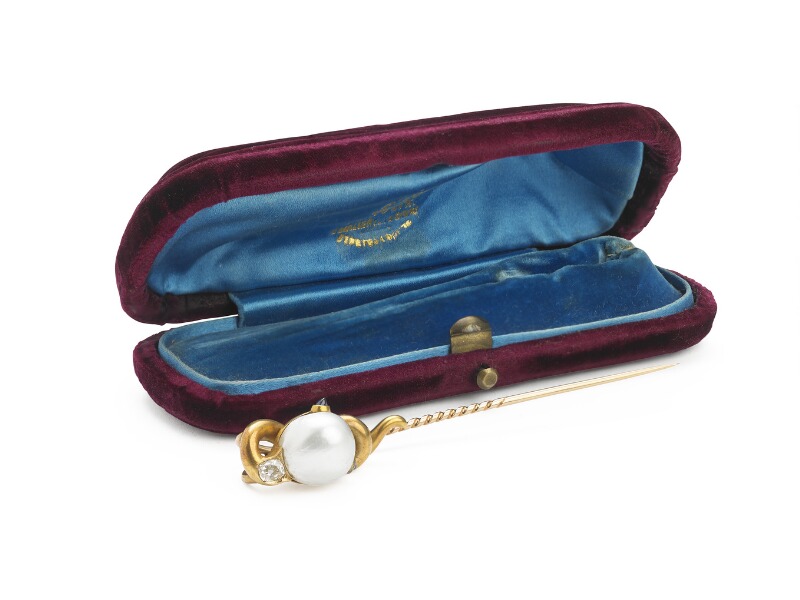 Other gifts given by the Tsaritsa include three brooches that she gave to her lady-in-waiting Thora Mortensen at the large villa “Hvidøre” just north of Copenhagen in the 1920s. The three brooches are made by August Hollming and Friedrich Koechli, and have estimated prices at €3,350-4,050, 4050-5,400, 5,400-8,050.

The provenance of a small Easter egg pendant is also quite interesting. It was made for Grand Duchess Anastasia Mikhailovna of Russia by Mikhail Perchin, one of Fabergé’s workmasters. 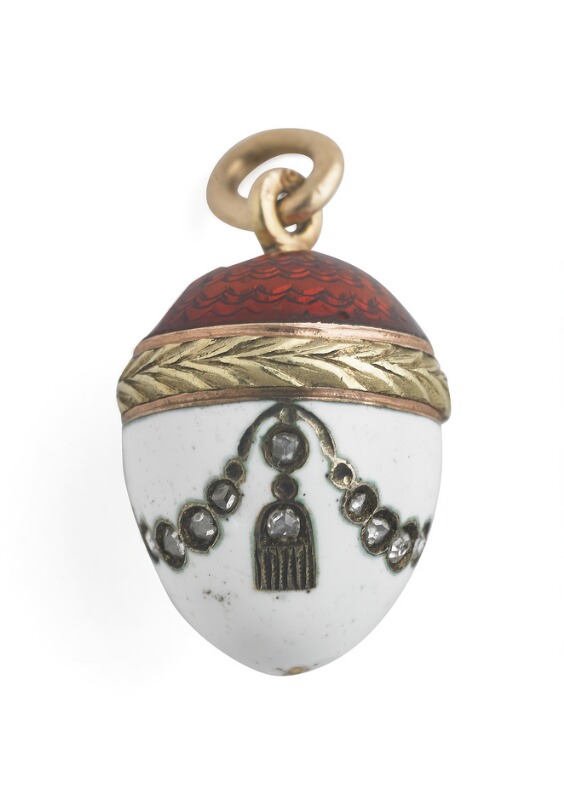 The Easter egg tradition was particularly strong in Russia, where Easter Day was an important religious holiday. Families would meet and give each other Easter eggs as a gift to celebrate the resurrection of Jesus, and the Imperial Family liked to order them from Fabergé, their favourite jeweller. The auction also features some very rare porcelain Easter eggs from Grand Duchess Olga Alexandrovna and Grand Duke Pavel Alexandrovich, both of Russia.

On auction is also a collection built up in the 1920s by Consul General Hans Poul Hoffmeyer, who was an envoy in Berlin, Moscow, Vienna and Warsaw over the years. It contains Russian interpretations of the European styles Baroque, Rococo, Neoclassicism and Empire; or put more bluntly it spans 100 years of Russian history of styles. It was customary at the time for the envoy’s residence to be used for official business of the state and therefore it had to be tastefully decorated – hence Hoffmeyer’s interest in antiques. The most prominent part of his historic silver collection is a large and rare Russian Rococo silver tureen and cover of oval curved form with gilt interior, body with two scrolling handles, rocaille finial on a stylized oblong chamomile flower, domed lid and raised on four embossed and scrolling supports hailing from from Johann Heinrich Zahrt, St. Petersburg in 1757. It is estimated at €10,500-13,500 (DKK 80,000-100,000). 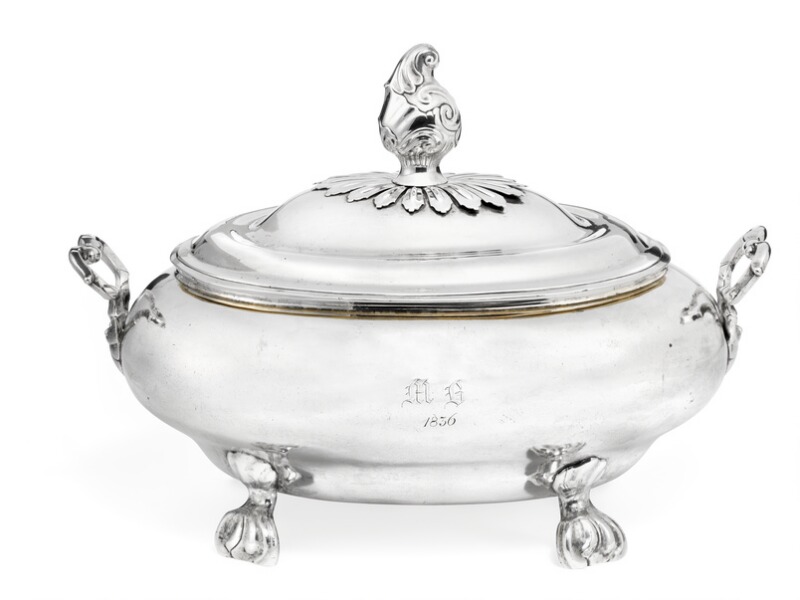 From the Danish businessman Gunnar Helge Haagensen’s collection, Bruun Rasmussen has five paintings by Nikolai Petrovich Bogdanoff-Belsky, who has depicted children in various situations, such as at the tea table and in the classroom. The works were acquired in Riga, directly from the artist himself, and have been in the ownership of the Haagensen family ever since. Estimates range from €2,000 – 27,000 (DKK 15,000 – 200,000).

From the collection of Chamberlain and former Lord Chamberlain Søren Haslund-Christensen, Bruun Rasmussen is selling a painting with a more modern royal angle. The still life “Lilies and a Book” from 1991 is painted by Dmitri Dmitrievich Zhilinsky, who spent time in Denmark during the 1990s in connection with a high-profile commission – a portrait of Queen Margrethe II. The artist gave the work to Haslund-Christensen as a thank you for securing him several other portrait assignments. 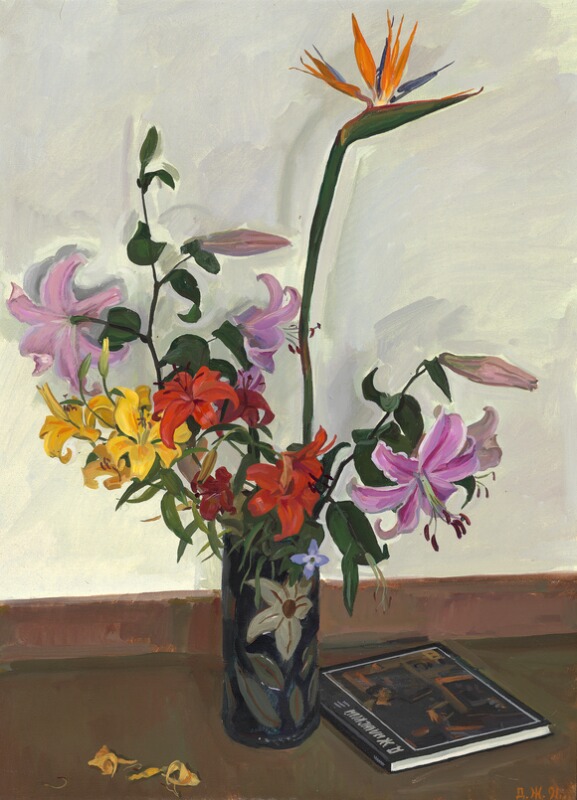 In addition to the Live Auction on 7 December at 2 pm CET, Bruun Rasmussen will also present Russian art and antiques at an Online Auction on the same day at 5 pm CET where you can bid on a wide selection of silver, porcelain, paintings, icons, jewellery, furniture, and collector’s items.