The National Gallery London is the first major national art museum to reopen in the UK, after 111 days of Lockdown. Our regular contributor film director and artist Margy Kinmonth is sharing her experience of the fist post pandemic visit to the gallery with our readers.

“To avoid the danger of travelling by public transport during the pandemic, my visit to the National Gallery starts with a 90 minute walk across the park. I’m excited about seeing my old friends again – the masterpieces, but I’m unprepared for the transformation of the gallery, a place I’ve worked in and visited so often. 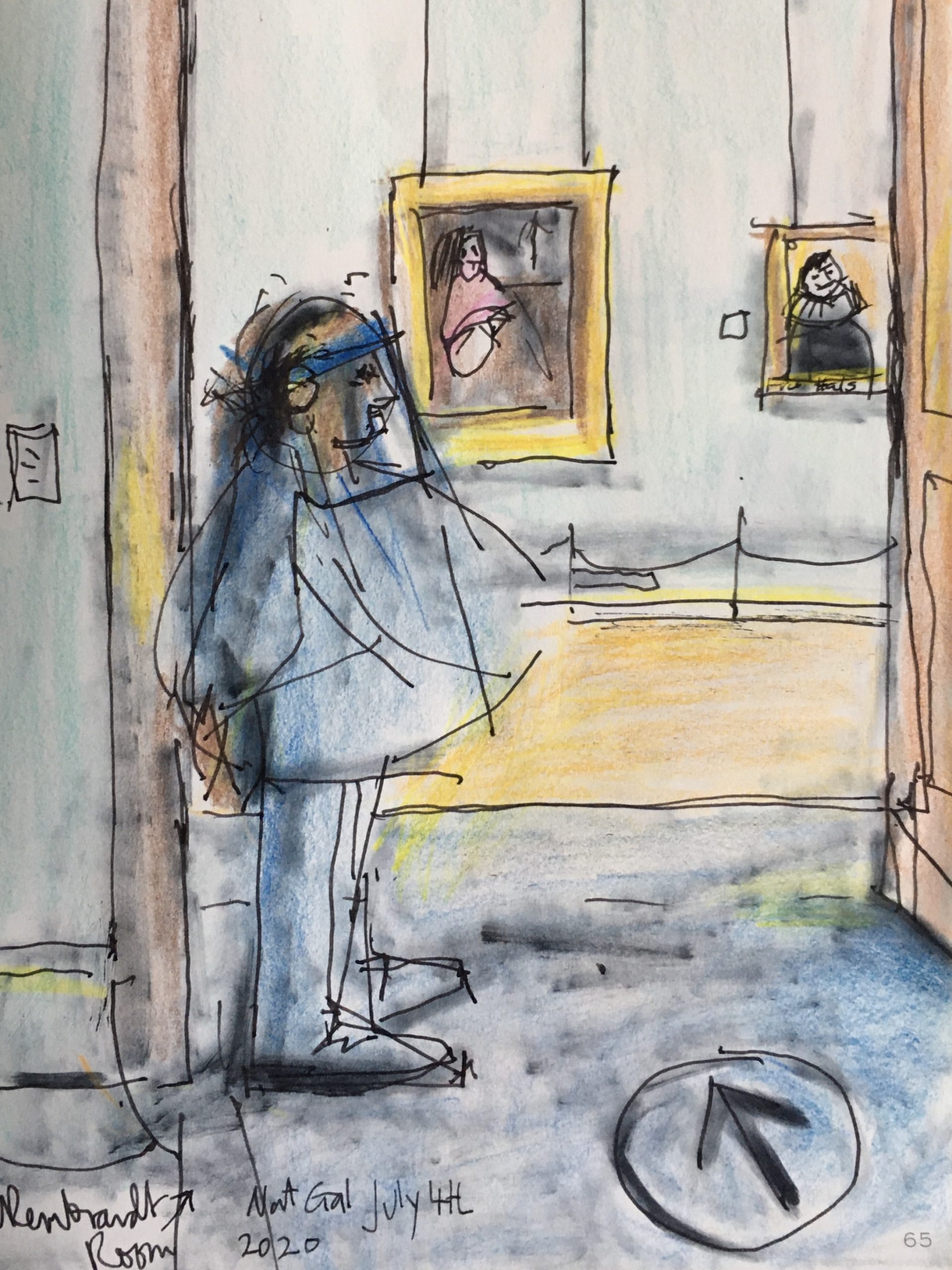 My tour feels different and strange. I’ve had to get used to months of online art viewing, examining pictures and virtual exhibitions on a tiny screen in the palm of my hand.

I am greeted by Dr Gabriele Finaldi, Director of the National Gallery, who tells me “The closure is unprecedented, three months is the longest the National Gallery has ever been shut in its 196 year history…we want to let the public back in to see our inspiring pictures, so safety measures are in place…” 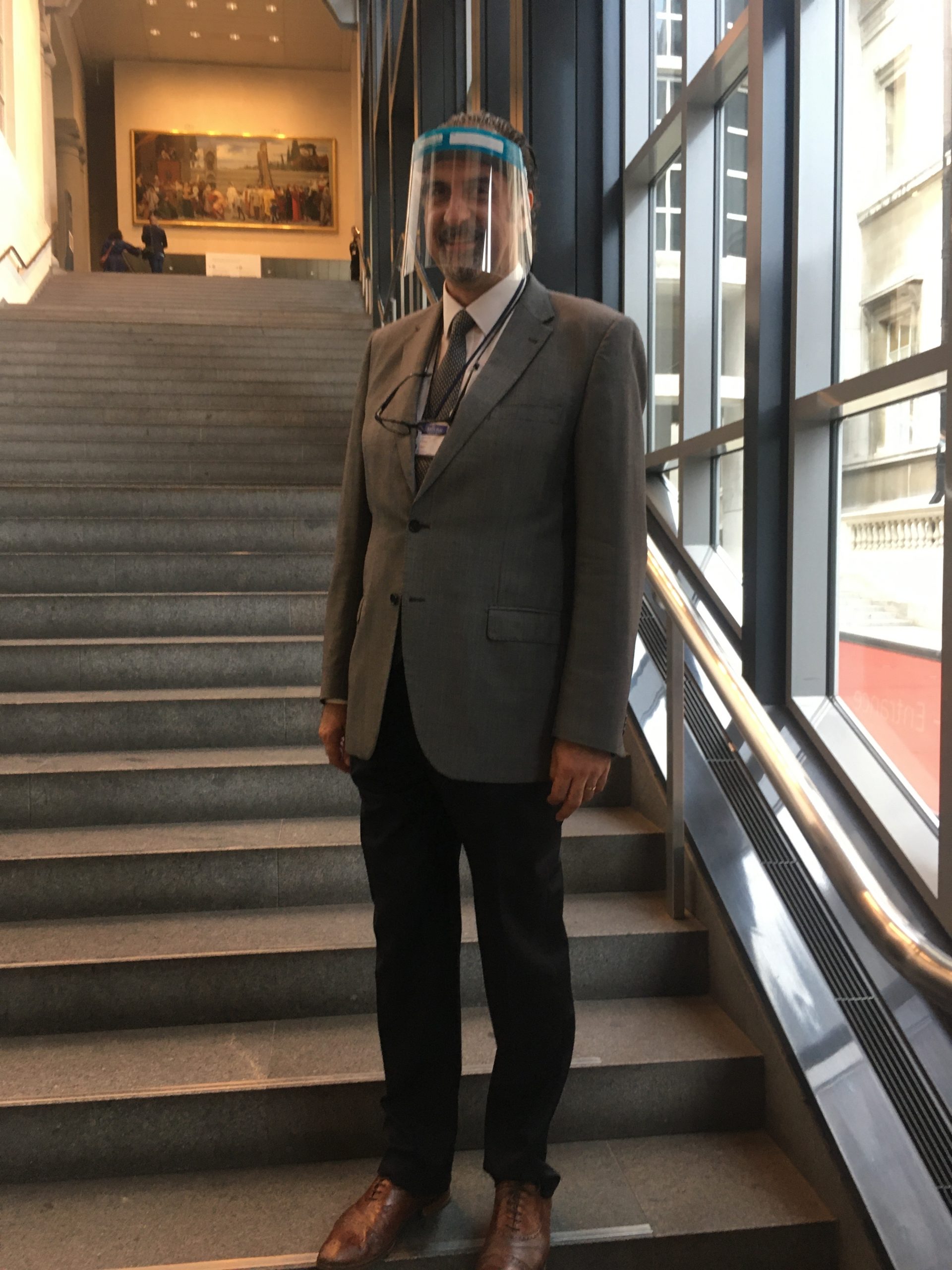 The safety measures are indeed unsettling – all the staff, including the director, curators and gallery keepers are wearing full PPE perspex face masks, gloves and eye protection. They also wear matching Monet waterlily ties. Some staff have reassuringly long hair after 111 days of lockdown without haircuts; in fact the National Gallery reopening coincides with the hairdressers reopening, so I’m pleased to find a relevant artistic portrayal by Rubens of Samson and Delilah – a tragedy of love and betrayal, showing Samson having his hair cut while he is asleep. 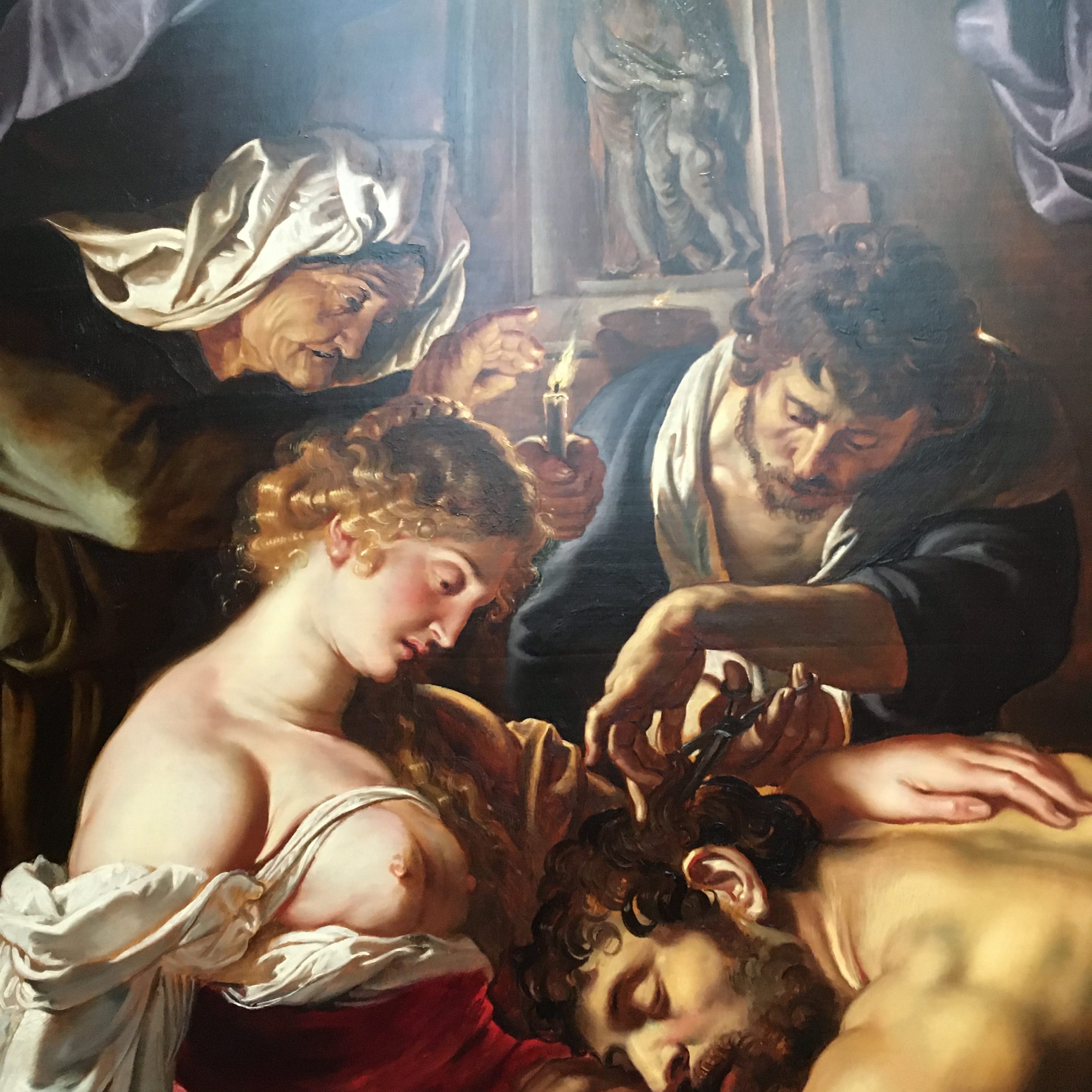 Samson having his hair cut by Rubens, @Margy Kinmonth

I have a choice of three Art routes designated by a system of arrows on the floor:  I pick the Italian route to begin, Route A takes me to my much loved Piero della Francescas and Bellini’s red clothed Madonna in a perfect blue sky. Here’s the Arnolfini couple, a tiny masterpiece. Is this a miniature version? No, it is just the same, I am struck by the individual scale of each painting, it’s the story that creates monumentality, not its physical size. There’s nothing like experiencing art for real with your own eyes.

I spot Leonardo’s Virgin on the Rocks tantalisingly alone in her own roped off zone –  left and right in the nearly empty galleries I glimpse masterpieces of the collection, my old friends Botticelli, van Eyck, Memling and Uccello. 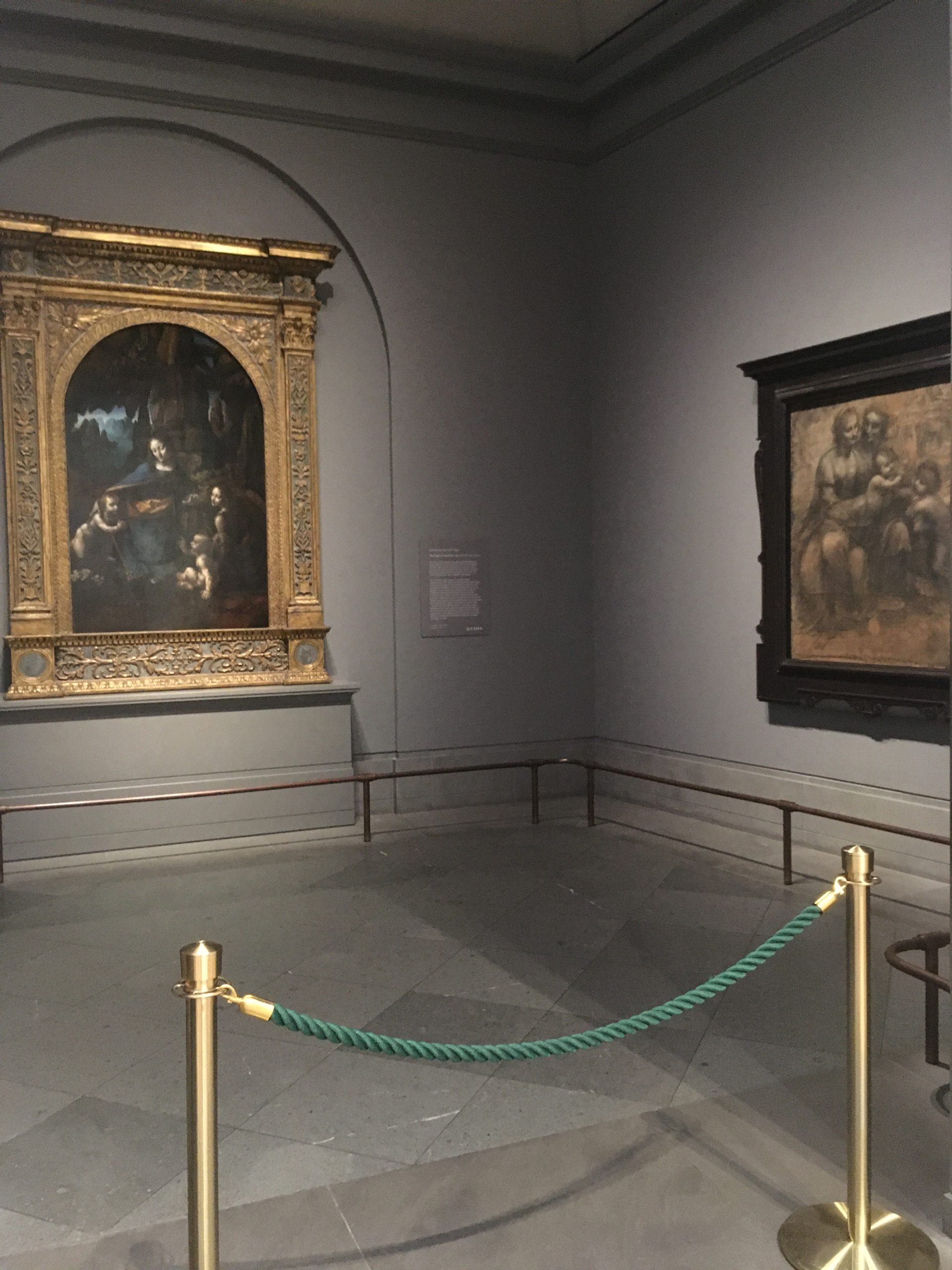 Virgin on the Rocks by Leonardo da Vinci, @Margy Kinmonth

Other favourite paintings jump out like Peter de Hooch’s domestic view “The Courtyard of a House in Delft” (1658). I’ve been doing so much painting and drawing myself during lockdown (see my Instagram @margy_kinmonth) I see things differently today, hungry for tips, I specially notice how he paints the foliage and brickwork, the dark spaces in corridors, the intimate snapshot of daily domestic life, a captured moment between mother and daughter. After so long in lockdown, it’s as if I’m seeing the art for the first time. How tiny is the Vermeer? Another minute gem.

“The Courtyard of a House in Delft” (1658) Peter de Hooch, @Margy Kinmonth

Route B takes me to the Van Dyke Room where the newly restored Equestrian Portrait of Charles by Van Dyck is super impressive at the end of the room, a massive canvas. I can’t help doubling back here against the arrow system to look again and drink it all in.

I’m looking for the one Russian painting in the National Gallery, it’s by ILYA REPIN (1844 – 1930) the leading artist in the Russian Realist movement, who painted genre, historical subjects and portraits of leading figures of his time. 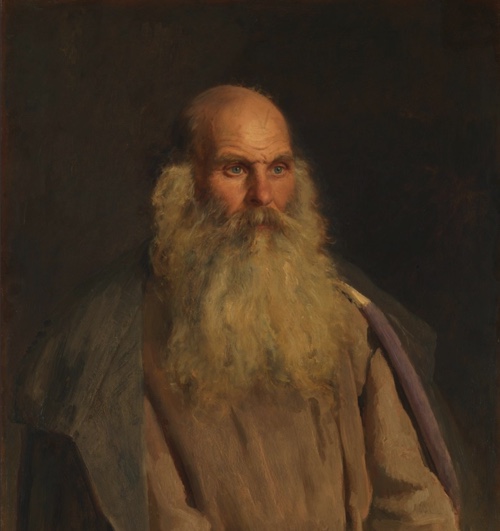 “Study of an Old Man” byIlya Repin, taken from the National Gallery website

REPIN was born in the Ukraine, where he returned to paint a number of peasant portraits, “Study of an Old Man” is one of these, it touchingly portrays a man with soft blue eyes and a very bushy beard. I’m told this painting is not on the main Covid19 routes, but on show somewhere deep in the small cabinet rooms. So the geographical tour bypasses Russia. One day the practise of borrowing art can return, I recall filming the young Titian’s earliest painting, lent by the State Hermitage to the National Gallery which featured in my film “Hermitage Revealed”.

The National Gallery has a major Russian artwork which many visitors would walk all over. Like me you might have walked over it too. I follow the arrows of purple Art Route C of my post Covid journey to examine the work in close detail. It’s a large floor mosaic pavement in the staircase of the Main Hall, created by a Russian poet. 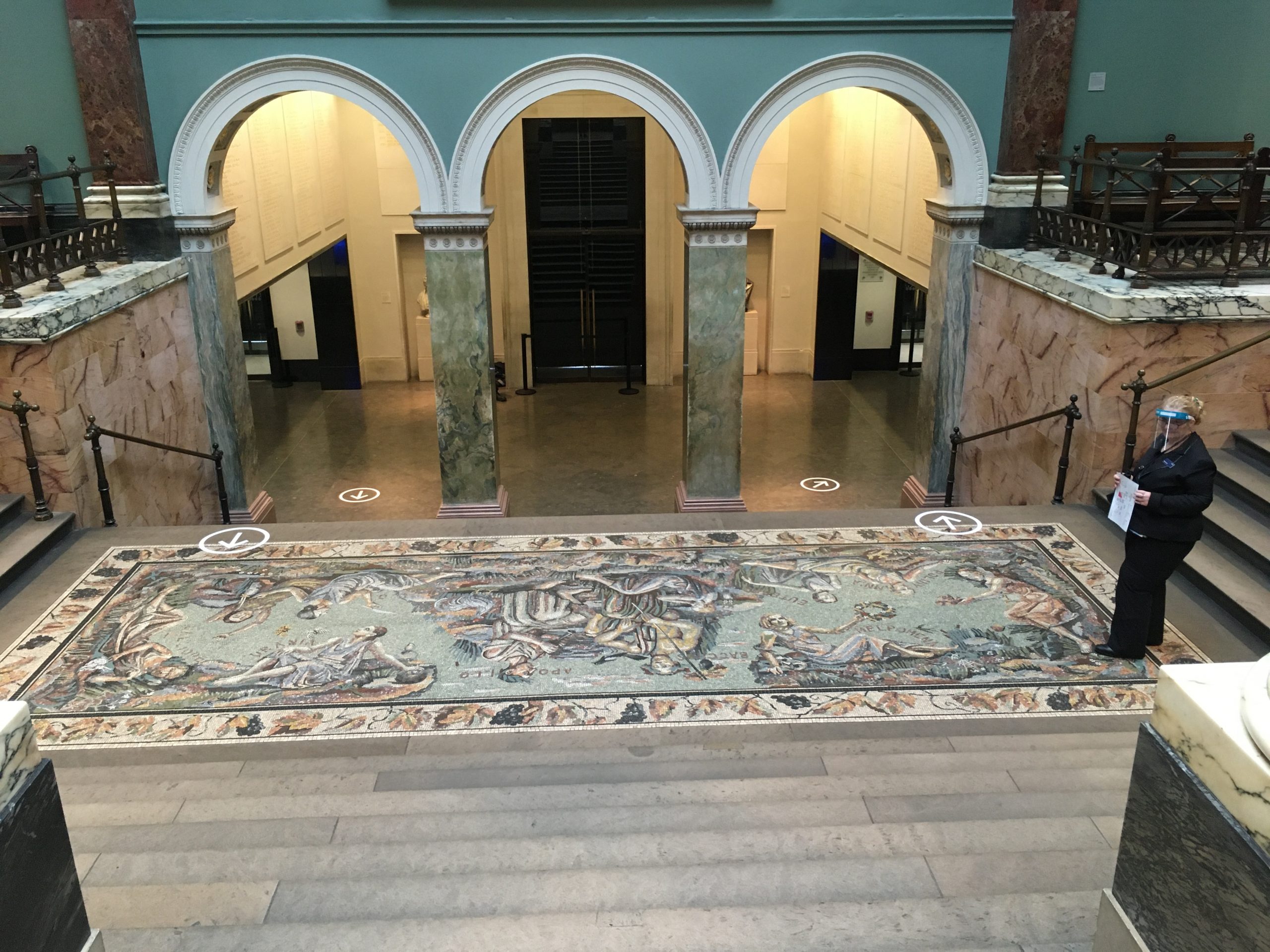 Anrep’s Mosiacs in the main portico of the National Gallery, @Margy Kinmonth

BORIS VASILYEVICH ANREP (1883 – 1969) was associated with the Silver Age of Russian Poetry, a group of Russian poets in St Petersburg including the legendary Anna Akhmatova who addressed poems to him. He moved to the UK and became one of the foremost mosaicists in Britain; between 1928 and 1952 the National Gallery commissioned ANREP to create four colourful mosaic pavements, which he described as his philosophical cycle, covering themes of work and leisure.

ANREP was an associate of the Bloomsbury Group of artists and writers, who notoriously championed modern art and modern attitudes. His Muses are not heavenly immortals, but portraits of people from his own world. Many of the characters here are played by Anrep’s friends, including one of the stars of Sergei Diaghilev’s Ballet Russes, prima ballerina Lydia Lopukhova –  the lilac fairy aka Lady Keynes, wife of economist John Maynard Keynes. The mosaics feature a roll call of influencers of the day including Diana Cooper, Virginia Wolf, Greta Garbo, Diana Mitford, Augustus John and T. S. Elliot. Compassion is a portrait of Anna Akhmatova surrounded by the horrors of war.

Labours of Love (1928) illustrates constructive and creative nature, including filming a zebra, working with electric drill, exploring, farming and washing a pig. Other pictures are Sacred Love, Art, Astronomy, Letters, Theatre, Mining, and flute playing with a contortionist thrown in. 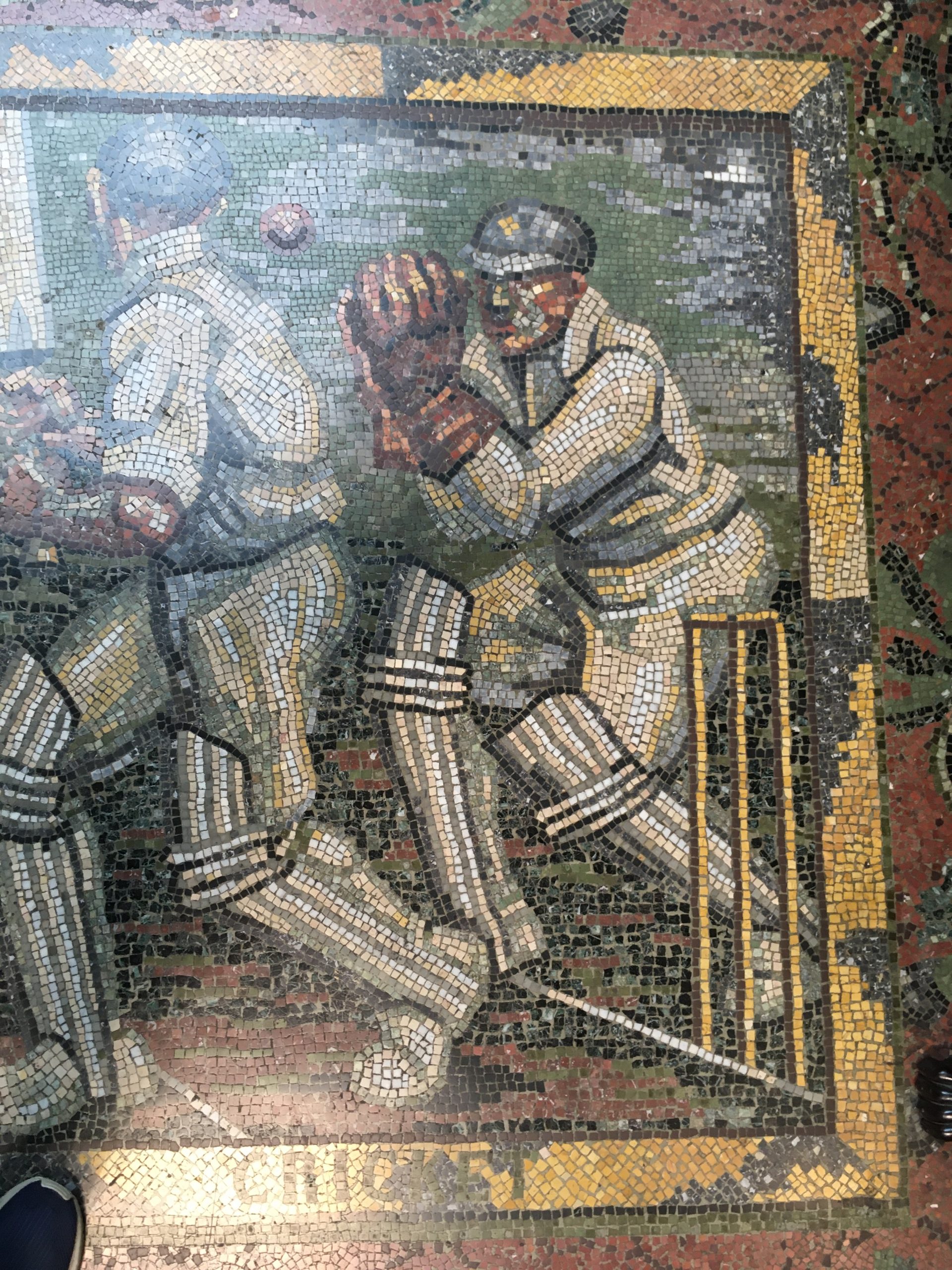 In 1952, Anrep laid a pavement, ‘The Modern Virtues’, his record of life and events of the 1930s and 1940s – splitting the atom and the war where Sir Winston Churchill is seen fighting a beast in a shape of a swastica.  Using politicians in art reminds me of filming the Soviet propaganda murals and statues in the Moscow Metro for my film “Revolution – New Art for a New World”. 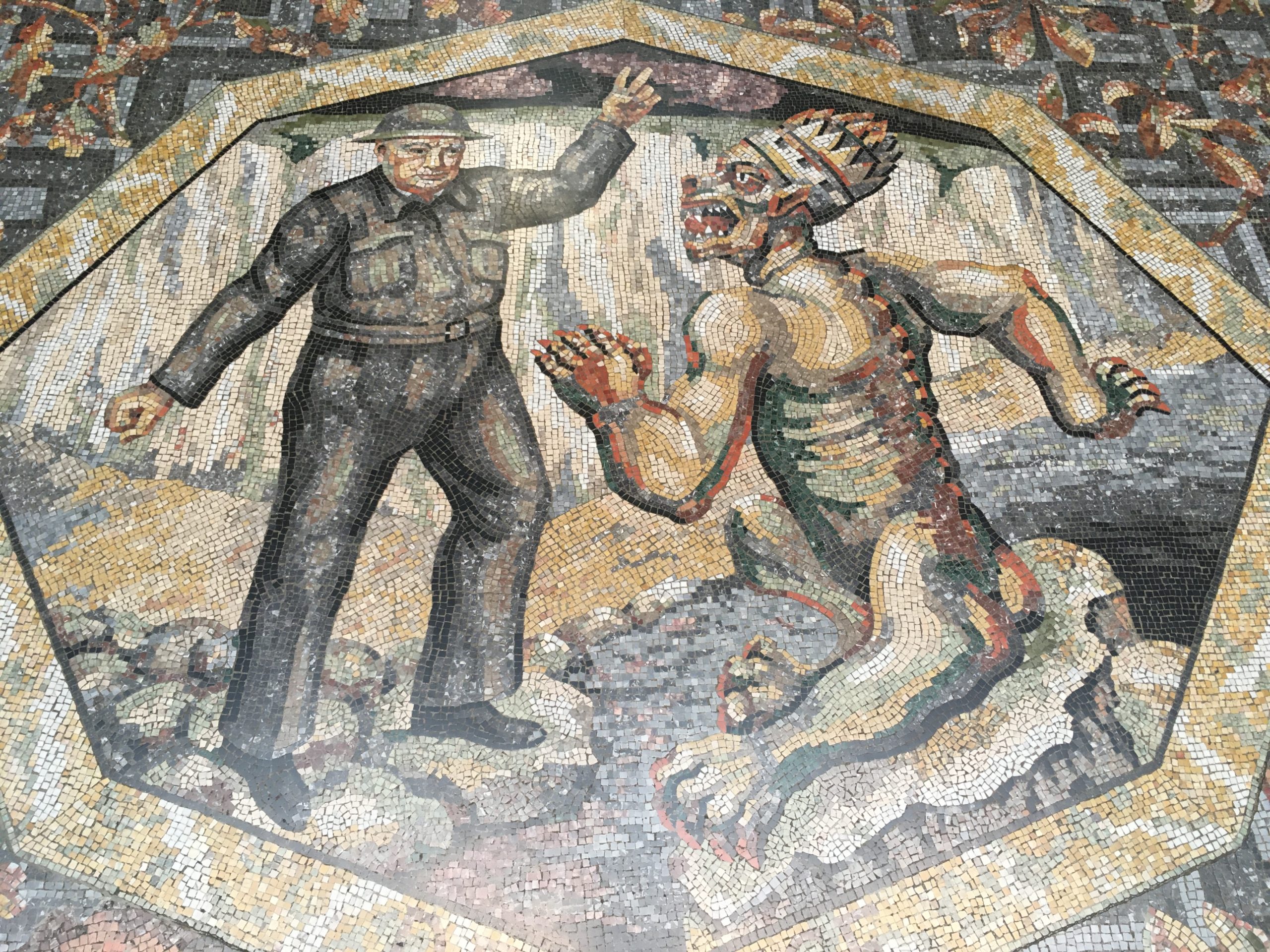 Finally Anrep has immortalised himself in the legend of the mosiac by depicting the Russian poet Anna Akhmatova looking towards his gravestone, linking together his art and her poetry.

I also notice as I examine the mosaic closely that most of these activities are not possible under the post Covid19 social distancing regulations.

Cricket – banned. Ballet – live performances not currently possible. Mining – tricky. Music and flute playing – with no live concerts, in jeopardy. Theatre – definitely off the agenda for now. Jiving and Charleston – not possible under social distancing rules. Exploring and travel – almost impossible at the moment.  Football – fans banned from matches. Hunting – against the law. Swimming – not allowed yet, except on Bournemouth Beach. Profane Love shows a man with two girls, and I don’t have the current political ruling on this activity.

And then there’s a great brand new acquisition which is very relevant today – Sorolla’s painting “The Drunkard” (1910) has a special significance on the day the pubs across England reopen…have a look. 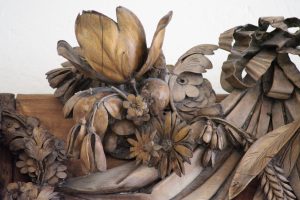