The Russian Revolution and Civil War – as never seen before! 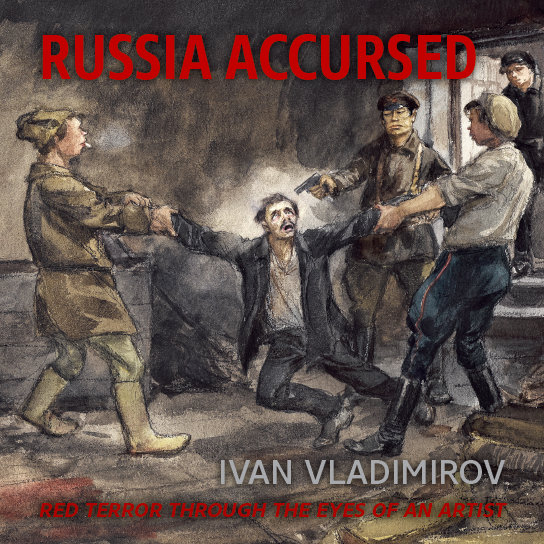 Packed with jaw-dropping, and at times blood-curdling images, Russia Accursed! showcases the reaction of Ivan Vladmirov (1869-1947) to the human suffering and Bolshevik barbarity he observed as an artist-reporter during the years 1917-25. Some of his paintings and watercolours appeared in magazines and periodicals, including London weekly The Graphic. But other scenes – featuring point-blank executions, passers-by cutting chunks of meat from a dead horse or dogs gnawing at a human corpse – were deemed too shocking for publication and had to be secretly exported from the USSR by American relief workers.

Selected from private collections, Russian museums and the Hoover Library at Stanford University, California, most of the 160 Vladimirov images in this majestic 336-page volume are published here for the first time. Placed in their historic context by scholarly essays, contemporary photographs and eye-witness quotes, they revolutionize our understanding of the beginnings of the Soviet Union.

Andre Ruzhnikov, one of the world’s pre-eminent dealers in Russian art and antiques, grew up in central Moscow during Khruschev’s Thaw, secretly listening to the BBC and Voice of America for news of the free world. He sold his first icon to a British journalist in 1968, and quit the USSR in 1976 – settling first near Oxford with his wife, then moving to California, where he first came across the work of Ivan Vladimirov in the Hoover Library at Stanford University; he has since assembled his own collection of thirty-eight works from Vladmirov’s Red Terror period.