Poems about paintings, or ”painting poems,” are a great tradition. W. H. Auden’s ”Musee de Beaux Arts,” about Bruegel’s masterpiece ”The Fall of Icarus” (ominously first published in the Spring of 1939), is one of the most well-known. And the Welsh poet and Anglican priest R. S. Thomas mastered, in works such as ”Van Gogh: Dr Gachet” and ”Guernica: Pablo Picasso,” this form of poetry.

My favourite in this field, though, is the former Archbishop of Canterbury Rowan Williams’s poem ”Rublev”; about the Russian icon painter Andrei Rublev and his painting ”The Trinity.” 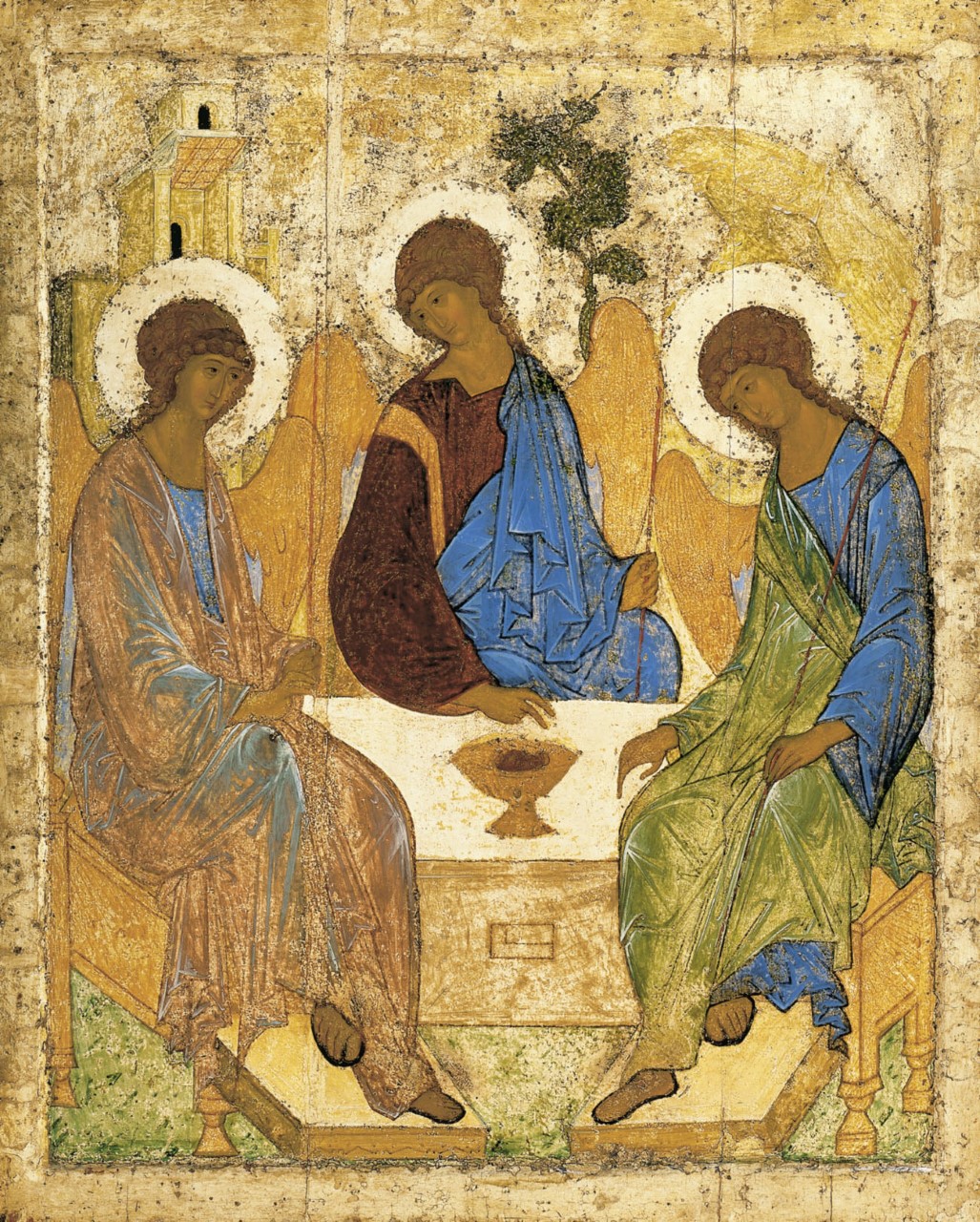 Not much is known about the real Rublev, and to prove a point, ”The Trinity” is the only work authenticated entirely as his. Filmmaker Andrei Tarkvosky utilised this biographical blank canvas when making his 1966 masterpiece ”Andrei Rublev” – a film which Rowan Williams has spoken in admiration about. That he was a monk in the Eastern Orthodox Church in the medieval era is all we really know about Rublev.

Rublev’s painting ”The Trinity” depicts the three angels who visited Abraham at the Oaks of Mamre (Genesis 18:1-8). Three angels who are universally seen to symbolise the Holy Trinity. Christian doctrine of the Trinity teaches that God, despite existing in three persons (ie, the Father, the Son, and the Holy Spirit), is one God. And the form (five verses totalling three lines each) and first word (”One”) of Williams’s poem are reflective of Rublev’s ”Trinity” and faith. Three is the magic number. Or, as Tarkovsky expressed in another of his films, ”Nostalghia,” one plus one equals a bigger one. An analogy I particularly like.

Williams’s nonchalant opening of, ”One day, God walked in,” creates a conversational tone. A, Listen, I’ve got a story to tell you, tone. Thereby creating an intimacy between Rublev and God and the reader. Another Holy Trinity, perhaps. And this is similar to how in Rublev’s ”Trinity” the arrangement of the figures invite the viewer to fill the last space left at their table. The poem’s final words, “We shall sit and speak around / one table, share one food, one earth,” square this circle. 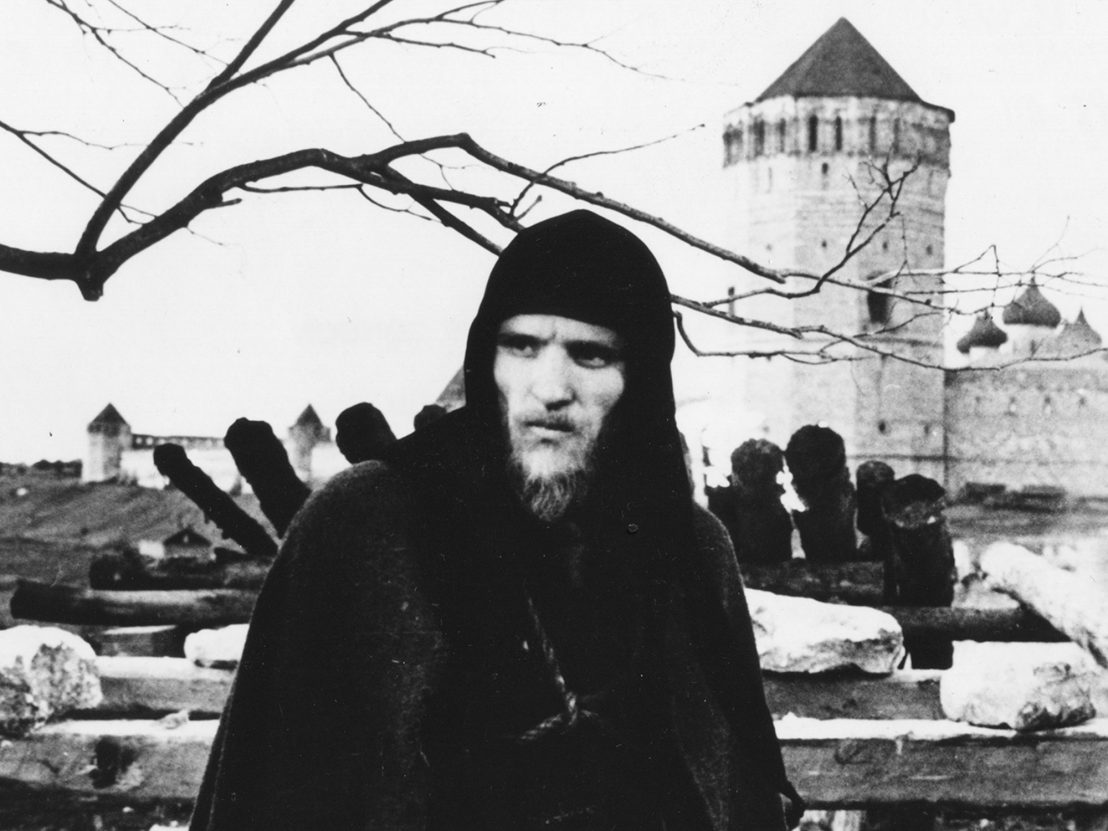 Continued, ”pale from the grey steppe, / slit-eyed against the wind,” God, this God representative of the Russian people, walks in and asks Rublev to, ”Colour me, breathe your blood into my mouth.” ”Breathe your blood into my mouth.” This earthly, almost ordinary God is in need of lifeblood and Rublev responds. ”Here is the blood of all our people, / these are their bruises, blue and purple, / gold, brown, and pale green wash of death,” he says, using his painting as a kind of prayer to resuscitate (resurrect?) God. This is painting (art) as sacrament. An act of co-creation that connects us to God. A bridge between the material and spiritual worlds, if you will.

Williams’s choice of words (and their alliteration) in this poem paint a raw, visceral picture. The word ”blood” is repeated and so is ”pale,” and Williams (Rublev) also uses, ”bruises, blue, brown, purple, pains, stain,” and ”scars.” These words convey a kind of sickness. Yet, out of this sickness (or death) comes life. Eternal life. Signified by Williams’s employment of, ”birth, death,” and ”for ever.” Ie, the birth, death and resurrection of Christ.

In the third verse, God is simply ”(god)” – a true leveller. However, Rublev vows, ”I trust I shall make you blush, / O I shall stain you with the scars of birth / for ever, I shall root you in the wood.” This repetition evokes devotion. And Rowan Williams’s words, ”forever, I shall root you in the wood, / under the sun shall bake you bread / of beechmast, never let you forth / to the white desert, to the starving sand,” crucify Christ. ”Bread” being Christ’s body; ”beechmast” the cross.

Moreover, Williams’s ”white desert” and ”starving sand” recall Yeat’s revelatory epic ”The Second Coming,” the Judaean desert of Matthew (4:1-11), and the aforementioned film ”Andrei Rublev” in which Christ’s crucifixion is reimagined on a Bruegelesque snowy Calvary.

Many great artists, including Andrei Tarkovsky, have explored the theme of Deus absconditus or Hidden God in their work. In his brilliant book ”Beyond the Frame: The Films and Film Theory of Andrei Tarkovsky,” Terence McSweeney explains how, ”Tarkovsky’s position in relation to a Deus absconditus is problematised by the fact that faith in his films must remain doubly hidden: it is absent from the screen, because, of course, it is impossible to represent the divine, but also due to the limitations placed on filmmakers in the Soviet Union where religion was effectively, if never formally, banned.” This means, ”In Andrei Rublev the eponymous monk’s spiritual journey is masked behind a search for artistic inspiration” and ”in Solaris Kris Kelvin’s religious epiphany becomes, on the surface, an emotional and psychological one, fundamentally connected to coming to terms with his past.”

Furthermore, R. S. Thomas, he who perfected the painting poem, spent a lifetime adjusting his interior dial to better hear God’s far-off frequencies. Lines like ”It is this great absence / that is like a presence, that compels / me to address it without hope / of a reply” and ”I have knocked all these years / at a supposed house / with somebody inside / (the movement of a curtain) / who refuses to answer,” are reasons why Rowan Williams has called Thomas (in a nod to the Danish philosopher Soren Kierkegaard) a ”great articulator of uneasy faith.” In his poem ”Play” Thomas mocks himself for thinking: ”As though one could sit at table / with God!”

However, in ”Rublev,” by having our eponymous hero “sit and speak around / one table, share one food, one earth” with God, Williams does let his imagination take this Kierkegaardesque ”leap of faith.” And in doing so, he accomplishes what he has stated he wishes Christianity might again do: ”capture the imagination of our culture.”

One day, God walked in, pale from the grey steppe,

slit-eyed against the wind, and stopped,

said, Colour me, breathe your blood into my mouth.

I said, Here is the blood of all our people,

these are their bruises, blue and purple,

These (god) are the chromatic pains of flesh,

I said, I trust I shall make you blush,

O I shall stain you with the scars of birth

For ever, I shall root you in the wood,

under the sun shall bake you bread

of beechmast, never let you forth

To the white desert, to the starving sand.

But we shall sit and speak around

Other Articles By Allyn Thomas 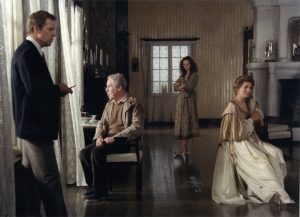