Robert Stephenson – We Are Building Capitalism! Moscow in Transition 1992-1997. 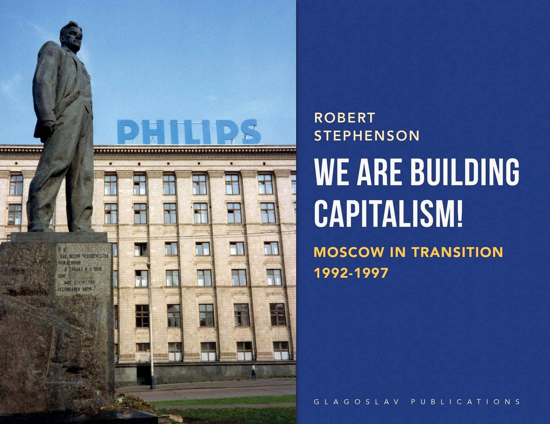 Amongst the final images in Robert Stephenson’s excellent collection of photographs of mid-1990s Moscow is one taken on a visit to the city’s ‘Committee for Architecture and Urban Planning’ (Moskomarkhitektura) in 1993.  It shows a model of the proposed new business district ‘Moscow City’ with its skyscrapers tucked inside the Third Ring Road to the west of the White House.  Compared with many of the other photos in the book, the model and associated plans mounted on surrounding display boards suggest an unlikely futuristic cityscape, conceived in a time of considerable uncertainty.  In their grandiosity they evoke the City Plans of the 1920s and 30s in which other monumental structures were imagined rising above the ‘old Moscow’ that the Soviet regime inherited when it made the city (once again) the country’s capital in 1918.

As a visitor to contemporary Moscow will know, however, ‘Moscow City’ has been realised, and now exists on a scale beyond even that suggested by the model that Stephenson saw.  Fueled in the early years of the twenty-first century by a boom in oil, gas, and mineral prices Moscow has become the most visible symbol of Vladimir Putin’s Russia.  As the country’s economic landscape shifted, the city’s real estate market and central shopping streets bore witness to the redistribution of post-Soviet wealth and the consolidation of economic and political influence.  It is not always easy, in the Moscow of today, to appreciate how recent much of this transformation really is, or what existed in the immediate aftermath of the collapse of Soviet power.  This book, rich in both photographs and accompanying recollections, provides a fascinating reminder of a time that can seem simultaneously recent and long ago. 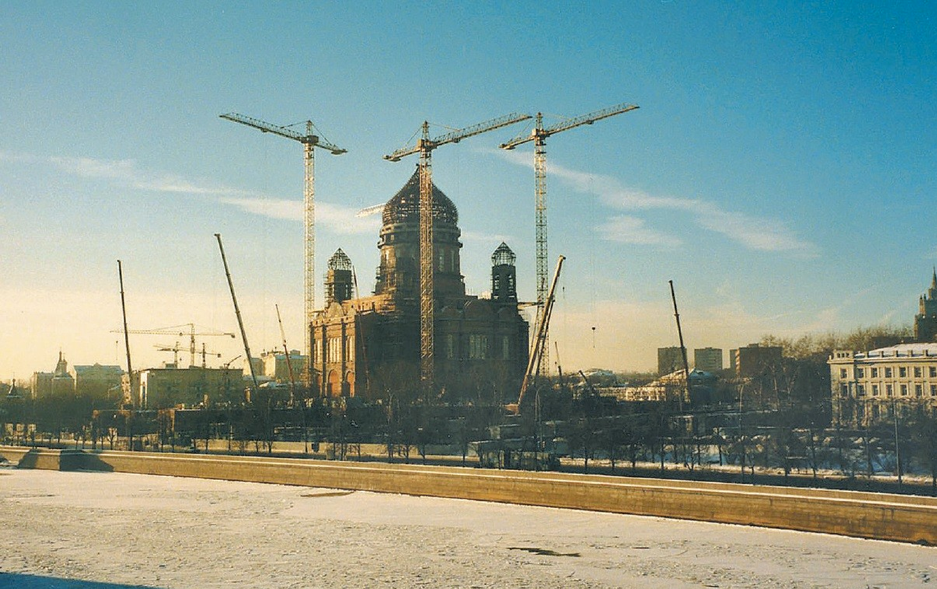 The rebuilt Cathedral of Christ the Saviour rises again on its former site, 1995.

Robert Stephenson lived in Moscow in the 1990s, working as a consultant to the newly-formed Federal Employment Service as post-Communist Russia adjusted to the labour market requirements of a world far removed from its own experience.  The photographs collected here show his keen eye for the revealing image or detail that captures the essence of a situation and suggests the societal forces at work.  A fascinating example of this is a 1992 photo of piles of banana skins swamping a litter bin in Gorky Park, evidence of the sudden availability of something hitherto scarce and the public’s desire to consume this rare object before it disappeared again.

Such is the journey that Russia has taken in the years since 1991.  As Stephenson reminds us, though, this journey entailed a near-decade of precarious stability and, more often than not, actual chaos, as much of the Soviet infrastructure collapsed before its place could be filled with a viable substitute.  Currency devaluations made savings and pensions worthless, and rather than bring prosperity for all Russians often found that capitalism was just as harsh and unforgiving in its lack of care for the individual as their Soviet leaders had warned them it was.  Photos from 1992 show streets jammed with people buying and selling goods in exchange for hard currency, or at least currency that could stay ‘hard’ long enough to be used somewhere else.  There are times, looking through these images, when the emergence of the glass and steel skyscrapers of ‘Moscow City’ feels almost inconceivable, as though it is hard to see quite how this Moscow was able to become the city it is today.

Visitors to contemporary Moscow (or indeed Saint Petersburg) will often find that even this change is not as deep as it can seem to be.  Side streets away from the main thoroughfares can still reveal a different city, and something of the ‘patched’ quality of the locations in Stephenson’s images can still be seen through the scaffolding that today wraps those examples of nineteenth-century or Soviet architecture not already cleared to make way for still more development.  Ironically, it is not always the older parts of the city that have been removed but the Soviet-era additions, like the series of giant Intourist hotels captured here, cleared to make way for others more in keeping with the cityscape that, in 2018, was at the heart of the month-long festival of the FIFA World Cup.

One of the most intriguing chapters in this collection deals with the various marches and demonstrations that Stephenson saw in the mid-1990s, as the Russian calendar itself mirrored the awkward transition from Communism to something else.  The preservation or re-purposing of Soviet holidays, along with the political campaigns and referenda of a system trying to nurture democracy combine here in images where banner-carrying Communist Party supporters march on one page and hardline nationalists rally on the next.  In a photograph from 1993, a group of police stand around blocking the road but are doing so in a rather diffident manner compared to those more recently seen on the streets of the capital.  These images of political dissent and instability are, in one sense, reminders of the uncertainties of the 1990s, when Boris Yeltsin could hold a national referendum on his presidency in April and send in the military to shell the Parliament building in September.  In another manner, though, they record a country emerging from one political model and searching at street level for another, more viable one.  Not for the first time in its history, we are reminded that Moscow’s streets can encapsulate the life of Russia as a whole. 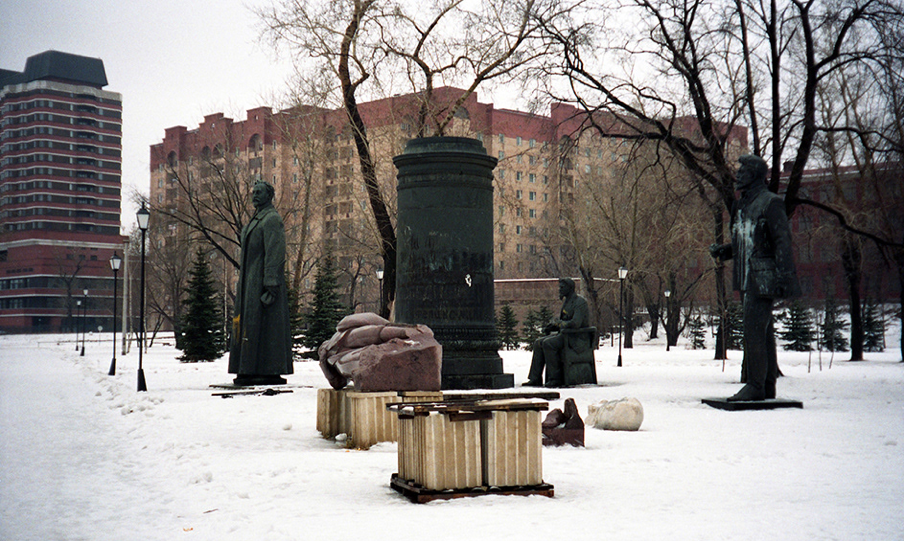 In the opening pages, Stephenson recalls seeing Soviet-era monuments and statues “unceremoniously dumped” in the grounds of the Central House of Artists near Gorky Park having been toppled from their plinths by protesters quick to clear the city of the visible reminders of Soviet rule.  Lying on their sides, or in varying degrees of being dismembered, the former leaders of the country are brought, literally and symbolically, down to earth.  And yet, in the ‘Park of Arts’ adjacent to the Tretyakov Gallery on Krymsky Val, they are still on view today, often cleaned and restored to at least a partial sense of order where if they no longer occupy prominent public spaces they still nonetheless remain on view in the city where they once presided.  The ‘transition’ from Soviet Moscow to the modern city – captured so memorably in these images – certainly produced some striking examples of dissonance.  As the skyscrapers of the business district rise ever higher, though, the visitor might feel that the transition is still ongoing, and that whilst no longer an outwardly Soviet city Moscow’s appearance and identity – like that of Russia itself – remain, if such a thing is possible, in a state of continual transition, with the ‘end point’ never entirely visible.

We Are Building Capitalism! Moscow in Transition 1992-1997 by Robert Stephenson is published by Glagoslav Publications (2019).