REVOLUTION IN BOLOGNA. NO MAMBO-JAMBO AS BALBI MAKES HIS MARK

THE VENERABLE ITALIAN CITY OF BOLOGNA is not on most Russian Art radars, but right now there are two compelling reasons to visit: a show of contemporary art from the Gazprombank Collection, and a display of Avant-Garde masterpieces on loan from the Russian Museum in St Petersburg.

Both exhibitions are being hosted by the MAMbo (as Bologna’s modern art museum likes to call itself), at two venues: the former Forno del Pane municipal bakery, built in 1915 and converted in the 1990s to house the museum’s permanent collection and extensive Morandi holdings; and the recently restored Villa delle Rose, a handsome two-storey 18th century hilltop mansion 2 miles away. 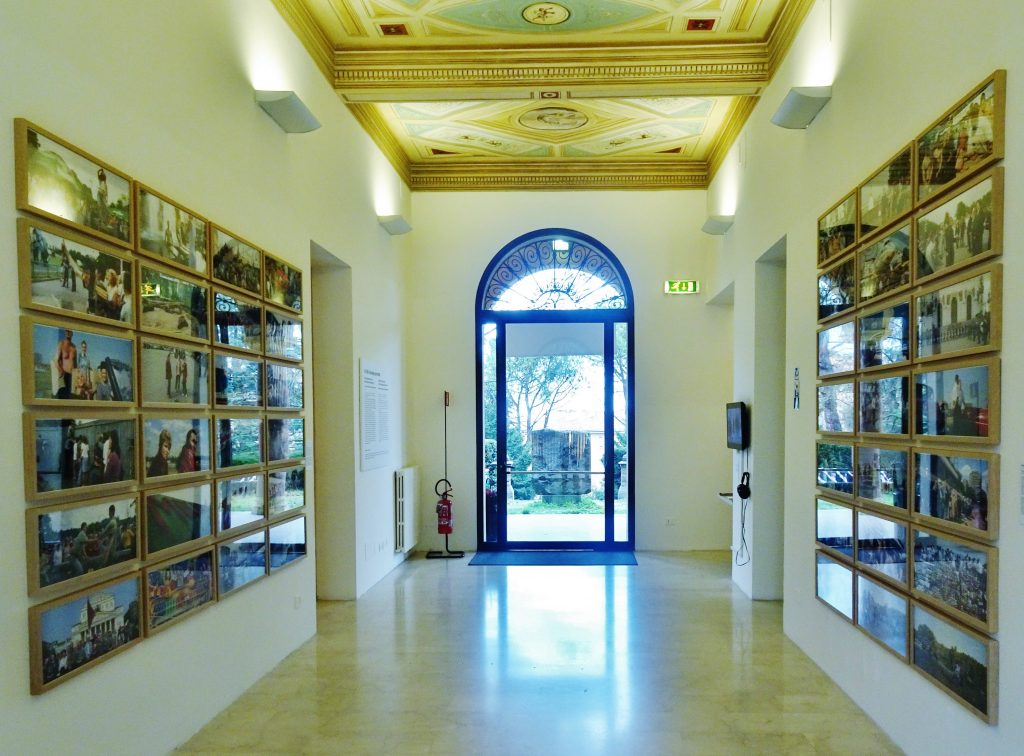 The MAMbo recently acquired a dynamic young boss in Lorenzo Balbi, formerly head of the Young Curators Residency Programme at the Fondazione Sandretto Re Rebaudengo in Turin. He could hardly have got off to a more auspicious start.

The Gazprombank Collection, encompassing Russian art since the 1990s, was begun in 2011 under the dynamic guidance of Marina Sitnina. I first came across part of it at the Dreaming Russia exhibition at the Vienna Albertina in Autumn 2013.

Several works from Vienna have reappeared in Bologna, which features the work of some 20 artists. Irina Korina and Alexandra Paperno benefit from the move, with their works elegantly juxtaposed in one of the few rooms at the Villa whose windows are not shuttered up. Korina’s whimsical rocking-chair is now joined by its matching electric light, with Paperno’s artfully faded grisaille Khrushchovki floor-plans on the wall.

Just outside, Daria Irincheyeva’s Empty Knowledge bookshelf installation – spaced out along one wall in Vienna – has been condensed into a corner, with the shelves aligned diagonally rather than horizontally. The change works.

Arseny Zhilyaev, whose Peace Is Our Ideal (2013) – a slogan spelt out in Cyrillic letters formed by angular strips of wood – was one of the most talked-about works in Vienna, has been upgraded in Bologna, where he has a whole room to himself, and added a man-shaped wooden bookcase to his original ensemble. This is superfluous – if not discourteous to the nearby Irincheyeva. Zhilayev has also painted a sci-fi triptych (2016) featuring a bearded gentleman who looks like Karl Marx, but is actually meant to be Konstantin Tsiolkovsky, the 19th century father of Russian space exploration. Zhilayev is becoming too verbose. His impact used to be all the stronger for being laconic. 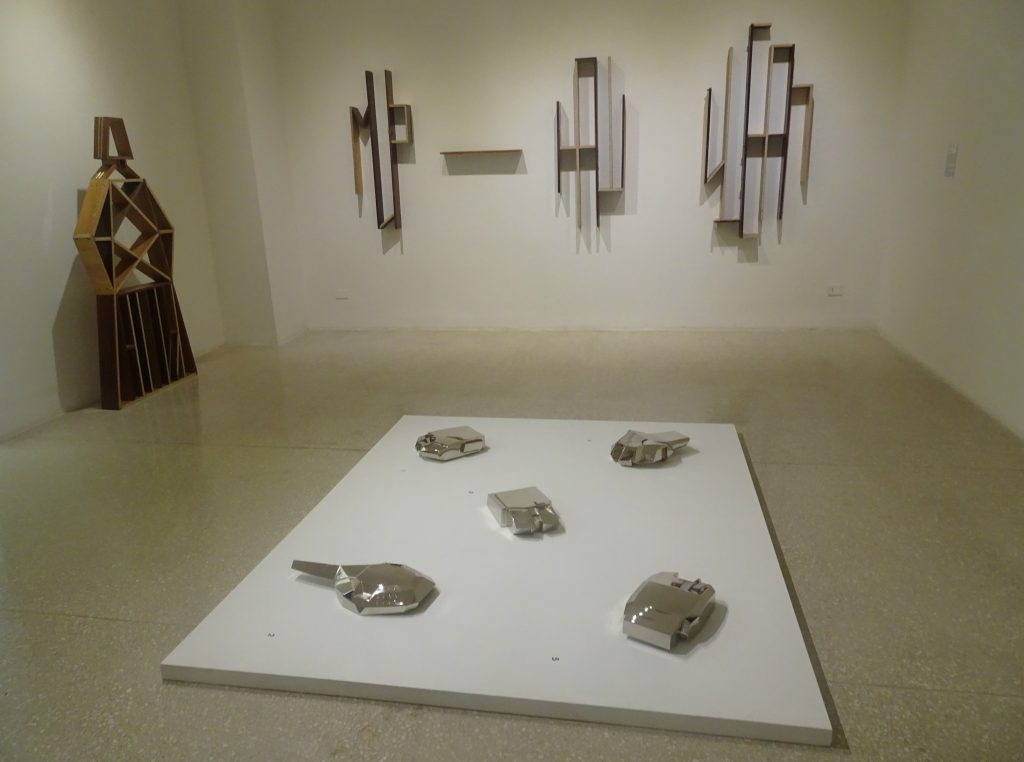 Olga Chernysheva was Gazprom’s heroine in Vienna, with her series of woolly bob-hats photographed from behind, entitled Waiting for the Miracle. Just two of these photographs feature – tokenly, one feels – in Bologna, flanking  Pavel Pepperstein’s Blue Headcarf (2011) in a clash of earnestness and cynicism between the two most-hyped artists from Russia today.

Over-exposed Kharkov photographer Sergey Bratkov was present in Vienna with his Full Moon video-stills. In Bologna his follow-up 2014 series Dummies on the Moon line the narrow staircase, while 45 of his colour photographs occupy the ground floor corridor.

Photography is everywhere. More than Alexander Gronsky, Alina Gutkina or Yuri Palmin, it is Mikhail Rozanov who catches the eye with his abstract visions of architectural detail, along with Sergey Sapozhnikov’s (deliberately) over-exposed, snow-covered compositions that create Avant-Garde patterns in a way that brings to mind the Blue Noses’ use of bread and salami.

The restrained video section offers a delightful contrast in material and mood.  Elena Kovylina’s Red Pomegranates (2010), shown on a small screen in the foyer, is an hilarious spoof of the Flight Into Egypt, with a white-robed bride beginning her journey to marital bliss by being led on a donkey down a traffic-clogged Leningradsky Chaussée. 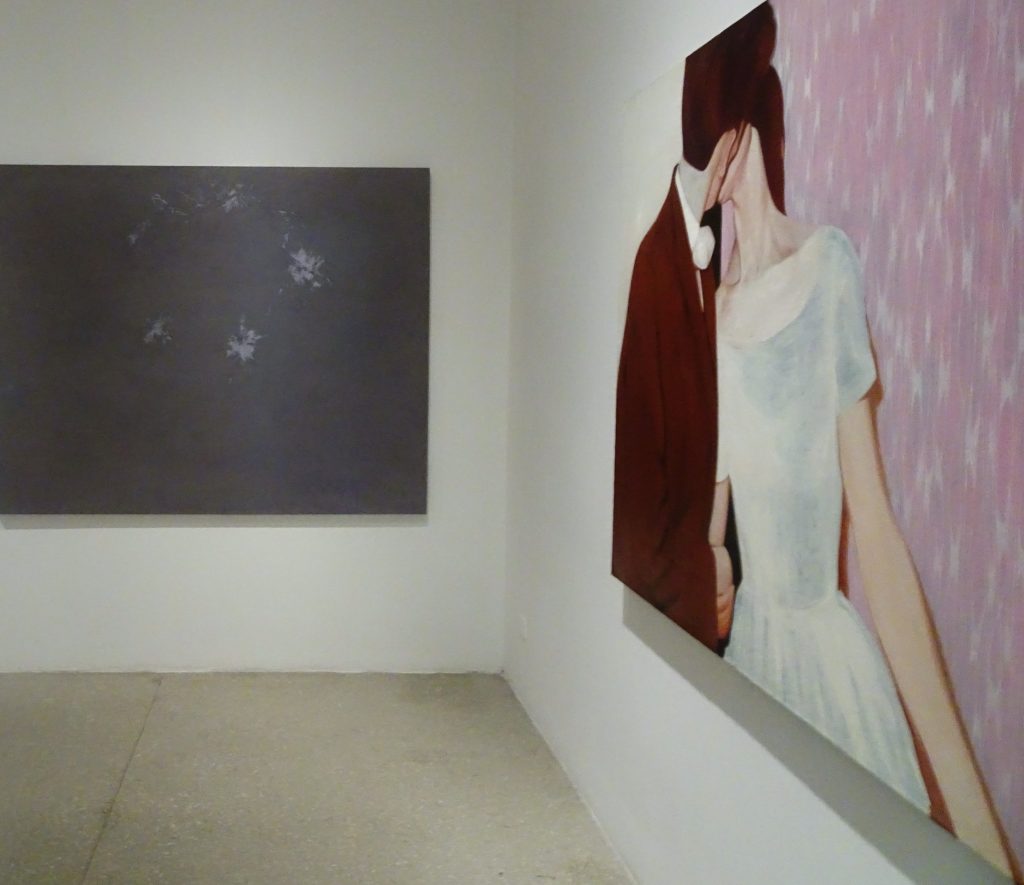 Clever husband-wife duo MishMash benefit from the claustrophobic enclosure of their vast series of coloured abstract paintings, Geopsychoisometric Examination of Moscow, in a small room. Then there are a couple of Red Wedge pastiches by my friend Afrika who, as well as possessing a curious mind and formidable intellect, is also an irresistible salesman. The great Semyon Faibisovich is also represented, alas by a late work – a trio of seated babushki from his My Yard series (2012) – rather than one from his enduringly powerful Perestroika period.

The Vienna show had two conceptualist heavweights in Yuri Albert and Vadim Zakharov; the Bologna show has Anatoly Osmolovsky. As with Faibisovich, it is to be regretted that he is represented by a recent work that show his powers in decline: five stylized tanks, this time nickel-plated, to add to his Hardware series that began life in bronze in 2006.

Svetlana Shuvayeva, who has burst on to the scene in the last two or three years, contributes a series of small, stylized, gaily colourful canvases. Perhaps she was aware that Gazprombank absolutely love series, as could be observed in Vienna with Albert and Alexeyev, and as we see in Bologna with Bratkov and MishMash. Shuvayeva’s series is – like the entire Bologna exhibition – entitled It’s OK to change your mind. The phrase is used by IKEA use to introduce their Return Policy. Far be it from me to suggest that a Russian artist quoting a Swedish company speaking English sounds a bit smart-arse.

This title appears ad nauseam on the messy cover of the 280-page bilingual English/Russian catalogue. This is handsomely illustrated but contains little worth reading – not that it’s easy to read text printed in lurid pink. Blank pink pages recur throughout, like some sort of Graphic Designer in-joke.

REVOLUTIJA, curated by Evgenia Petrova and Joseph Kiblitsky, features over 70 works from the Russian Museum in St Petersburg. It felt refreshingly different from my previous ‘Avant-Garde’ assignment: Catherine de Zegher’s appalling show in Ghent (since removed for breaching the trade descriptions act).

Ilya Repin’s What Freedom! (1903) welcomes us to Bologna, with a fully clad couple pounded by waves and surf, followed up by his 17 October 1905 , hung close to Serov’s Bloody Sunday soldiers about to fire on snowbound protesters. These works conform splendidly to the show’s Revolutija title (which at least, unlike last year’s Russian contemporary show at the Pompidou, doesn’t end with a spurious exclamation-mark).

However, the revolutionary relevance of Serebryakova’s Banya Nudes or Serov’s portrait of Ida Rubenstein escapes me. The same goes for Altman’s Akhmatova, Grigoriev’s Meyerhold or Chagall’s Promenade. Relentlessly hawking these superb works from one international exhibition to the next can cheapen their impact.

Several giant works, of more historic than aesthetic interest, will never receive a more sympathetic setting. These include Vasily Sukhayev’s 1917 Regiment In Position; Boris Kustodiev’s 1920 Fête in Honour of the 2nd Congress of the Communist International; and Isaac Brodsky’s 1932 Delivering the Communards’ Flag to the Workers of Moscow on Khodynka Field… which lords it over one hall flanked by Malevich and Samokhvalov, reduced to the status of admiring acolytes. The Kustodiev, like Vasily Kuptsov’s 1934 aerial view of Leningrad beneath the aircraft Maxim Gorky, reminds us that the Winter Palace was once blood red rather than its current genteel turquoise.

Malevich stars elsewhere – his black-on-white Square, Cross and Circle (c.1923) aligned tellingly alongside the diagonal colour bands of Matyushin’s 1922 Movement In Space. A pity that Malevich’s Red Cavalry (1932), with its layers of psychedelic sub-soil, is hung separately – opposite a liberal supply of Samokhvalovs that show just why he can be rated the most original artist of the Soviet era after Deineka. 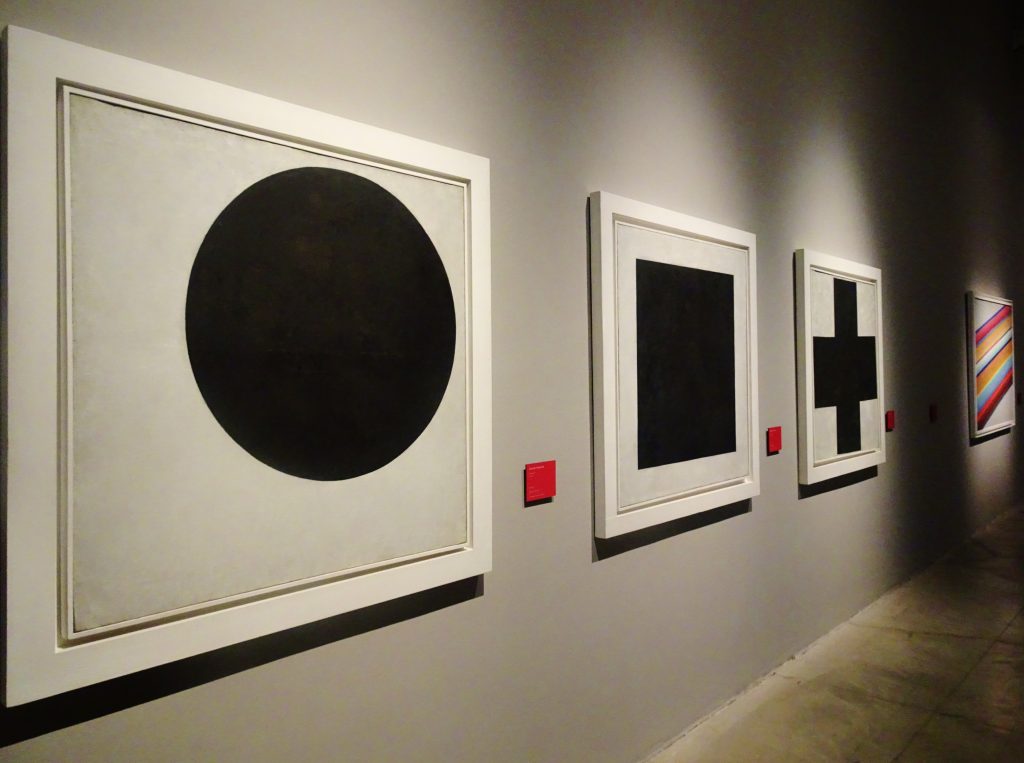 Much of the show feels like a parade of Early 20th Century Russia’s Greatest Hits. Other heroes are Petrov-Vodkin and Filonov – represented by several vast, majestic works in his hallmark microscopic style, plus his mesmerizingly ambiguous 1936 Portrait of Stalin.

The exhibition also makes room for such worthy but less familiar artists as Mikhail Vexler, Vladimir Malagis and Sofia Dymshits-Tolstaya, before ending with a version of Vera Mukhina’s 1937 Worker & Kolkhoznitsa: the sculpted epitome of Socialist Realism. 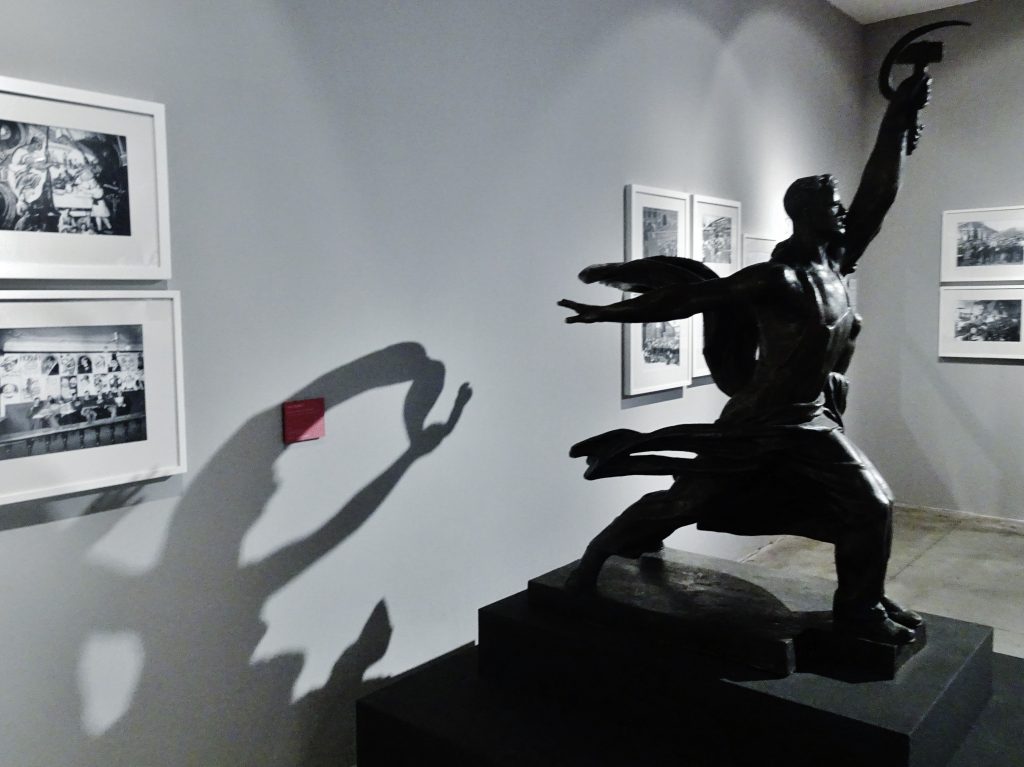 The magnificent 232-page catalogue – sadly in Italian only – makes judicious use of contemporary photographs. One, opposite Goncharova’s famous 1913 Cyclist on his bone-shaking cobbles, shows two Tsarist-era gentlemen pedalling around a miniature velodrome concocted by strapping together sections of picket-fencing and propping them up at 45°.

Don’t try that after hitting the vodka.